Our Fundraising Group, Alexandra’s Angels, is inspired by the story of Alexandra Foulis who died at the age of 24. Known to loved ones as Ally, she was a fun, outgoing and confident young woman whose life ended far too soon. She underwent surgery, radiotherapy and chemotherapy to halt a grade 3 astrocytoma but Ally passed away in August 2011. Through Alexandra’s Angels, her sisters Melissa and Rebecca are keeping Ally’s memory alive and funding the fight against brain tumours in her name.

“Not only had the tumour returned but it was back larger than before, now measuring 7cm. What’s worse, it was inoperable because it was too close to the nerves that controlled her breathing and heart-rate. We were all devastated to learn the tumour was now terminal. Ally being Ally, tried to lift the mood, saying: ‘Well, it ain’t over till the fat lady sings, and I ain’t singing yet!’”

Here is Alexandra’s story, as told by her sister Melissa…

It’s been seven years since Ally left us but I’m still not used to there being just the two of us. I’m the youngest, Ally was the middle sister, then Rebecca was the oldest. Our middle one, our amazing Ally, was taken away from us, and now there are two of us instead of three.

Ally was always the confident one. She was hilarious, outgoing and loved nothing more than being with her friends and her boyfriend Dave. She always had everyone in stitches and she was fiercely loyal. When she was 22, Ally started experiencing weakness on the right side of her face. It was so bad that sometimes half her face would be completely frozen. She was diagnosed with Bell’s Palsy and given medication but it didn’t seem to help. Ally, once so confident and fun-loving, would now stay at home because she was so self-conscious about how she looked.

It took seven more trips to the GP before she was referred for an MRI scan, and it was then we found out that she had a grade 3 astrocytoma. Our family had never known anyone with a brain tumour and knew little about them, so we didn’t realise how serious things were. All we needed to know was that it wasn’t terminal and that there were ways of treating the tumour.

Ally had been working in retail at H&M and stopped working immediately as she prepared to have surgery at Leeds General Infirmary. They removed 30% of the tumour and six weeks of radiotherapy followed. This wasn’t too tough but she did get lonely being at home all the time and not working. She lived with Dave but he had to work so I knew exactly what would do the trick – a Shar Pei puppy that she had always dreamed of having. She named him George and she loved him to pieces.

Chemotherapy and steroids really took it out of Ally. She gained lots of weight and didn’t look like herself anymore, and her confidence was shot to shreds when she started losing her hair. If that wasn’t enough, her mobility was affected and she found it harder and harder to stay standing. Before long, she was in a wheelchair and couldn’t walk independently. She was only 22 and should have been out having a good time, not at home like this.

We made sure she had as much support as possible around her and she was never alone on her hospital visits. Dave was brilliant with her and was always taking time off work to be there for her. One night in hospital, he literally kept her spirits up by sneaking a bottle of vodka onto the ward. She didn’t drink it, of course, but Dave knew it would make her laugh.

Ally made it through chemo and we were all absolutely thrilled when she got the all-clear. It was October 2010 and after 12 months of treatment, scans showed that apart from some scar tissue, the tumour had gone. Looking at the before-and-after scans, we couldn’t believe it was all over just like that. We headed down to the pub to celebrate and Ally turned her attention to physiotherapy and learning to walk again.

Of course, things didn’t just switch back to how they were before. Ally still struggled with her confidence but she was determined to get her independence back. I remember one time going around to her house and seeing her reaching up and trying to clean the windows; she was struggling but it was amazing to see her making progress.

About five months after being given the all clear, Ally seemed to be going downhill again. Her mobility was suffering and she couldn’t get herself up the stairs, and then she started having excruciating headaches. Ally went to see her consultant but they said headaches were to be expected and that she should wait until her six-month check-up.

She fought on and a month later she had another MRI scan. Not only had the tumour returned but it was back larger than before, now measuring 7cm. What’s worse, it was inoperable because it was too close to the nerves that controlled her breathing and heart-rate. We were all devastated to learn the tumour was now terminal. Ally being Ally, tried to lift the mood, saying: ‘Well, it ain’t over till the fat lady sings, and I ain’t singing yet!’

That evening I arranged for Ally to have a second opinion from a specialist neurosurgeon in London. The neurosurgeon agreed with her consultants in Leeds but suggested a drug called Avastin and also recommended that Ally start a higher dose of PCV chemotherapy. In the meantime, I started fundraising under the name ‘Alexandra’s Angels’ to pay for the Avastin. Ally ended up receiving this on the NHS but I kept fundraising, believing that there would be other alternative treatments we could pay for. I’d read about a girl who was a similar age to Ally with the same tumour, and she’d been to Texas for proton beam therapy and got the all-clear. I think throwing myself into fundraising and researching treatments was my way of coping with it all.

Ally had just a few cycles of the high dose chemo, which gave her some horrible side effects and lowered her immune system, making her vulnerable to infection. For the first time, she had a seizure where she was unresponsive and shaking. It was terrifying and Ally had to stay in hospital for a while after that. Eventually we were told that there wasn’t long left, so Mum and Dad arranged for Ally to spend her final days at home.

This wasn’t to be, however, as she had another severe seizure and was rushed back to the hospital again. I was in denial throughout all of this and kept myself busy with fundraising; I just wasn’t ready to accept that my sister was dying.

The whole family stayed by her side in hospital following this second seizure but we went home to rest at the end of the day, leaving Mum with Ally. At 3am, on 19th August 2011, Ally died. It was 17 days after her birthday and she was only 24.

I wish I’d listened to Ally when she tried to tell me what she wanted for her funeral. I told her to stop being silly but if I’d have listened then maybe when the day actually came around on 31st August, it would have been easier. I just never thought the day would come.

The days, weeks, months and years since have been really tough on us all. I was signed off work and I remember I just slept and slept. Mum, Dad and Rebecca were distraught too. Rebecca and I wanted to keep fundraising in Ally’s name and so we decided to make Alexandra’s Angels an official Fundraising Group with the Brain Tumour Research charity.

We want no other family to go through what we’ve gone through and continue to go through to this day. Brain tumours kill more children and adults under the age of 40 than any other cancer, and more women under 35 than breast cancer, yet historically just 1% of the national spend has been allocated to this devastating disease. Although we can’t help Ally, we can help improve outcomes for other patients and, ultimately, find a cure.

Brain tumours are indiscriminate; they can affect anyone at any age. What’s more, they kill more children and adults under the age of 40 than any other cancer... yet, historically, just 1% of the national spend on cancer research has been allocated to this devastating disease. 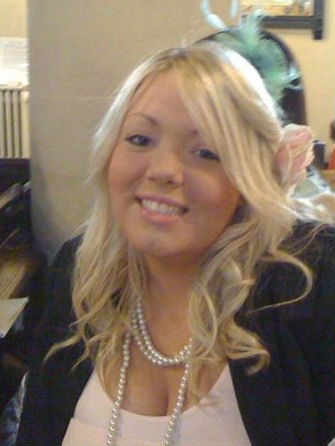