Gloucestershire husband, father, and grandfather, Alan Davis, was 67 when he was diagnosed with a grade four glioblastoma multiforme (GBM) brain tumour, after suffering from memory loss, and problems with his balance. Due to its size and location, surgery wasn’t an option and an intense course of radiotherapy was prescribed. Unfortunately, the treatment didn’t help and Alan died in January 2009 less than six weeks after his diagnosis.

“It was early November that year when I remember having this one conversation with dad and he just couldn’t get his words out. The quick-witted, articulate and confident man I knew was not the man that was talking to me and that’s when I insisted on taking him to the GP as this wasn’t right.”

Here's Alan’s story as told by his daughter Sarah-Jane…

Alan was a great dad, grandad, husband and friend. He was very popular and would light up any room with his playful banter and friendly personality. He was an impressive 6’3” and although he would tower over people he was seen as approachable and kind-hearted.

When he started to behave differently, becoming absent minded, falling asleep on the floor of his office and experiencing issues with his balance, we thought it was odd but tried not to think too much of it.

2008 had already been a hard year for us as a family. My marriage had broken down and my daughter and I were trying to get back on our feet. At the same time my parents had lost their business and their house and we had rented a house together to get our finances in order and so mum and dad could help me with my daughter, who was just a toddler at the time.

It was early November that year when I remember having this one conversation with dad and he just couldn’t get his words out. The quick-witted, articulate and confident man I knew was not the man that was talking to me and that’s when I insisted on taking him to the GP as this wasn’t right.

The GP observed dad and asked him simple questions like “When is your birthday?”, “How old are you?” and “What is the day today?”. Dad looked frustrated and distraught as he stumbled over his answers and the GP immediately referred us to the Walsgrave hospital in Coventry for further tests.

Just over a week later dad had a CT scan and an MRI scan. We were taken into a side room for the results and that is when they gave us the horrific news that dad had a brain tumour.

The consultant explained that his tumour was called a grade four glioblastoma multiforme (GBM), an aggressive type of tumour that would ultimately end his life. I was devastated by the news and was overcome with emotion. Dad however was trying to understand what was being said to him and remained in a state of shock.

Sadly, as the tumour was located in the middle of his brain and was about the size of a golf ball, the doctor felt that to operate would be too risky and it would be highly likely that my dad would come out of that operation severely damaged. Radiotherapy would be the only option.

Being told we may only have only six to eight weeks left with dad was heart-breaking. We all just had to accept that the disease would take his life and all of us would have to accept that the radiotherapy would only control the tumour, but not get rid of it.

Dad remained positive during the treatment as he settled down in a chair every day, taking the time to chat to me and also spend time listening to music. He tried to take everything in his stride, but ultimately, he knew what would be coming down the line.

It was the beginning of January 2009 that Dad caught pneumonia due to his immune system being so weak from the treatment. He was rushed into hospital and we were told that the prognosis didn’t look good.

I walked out of his room for a matter of minutes and returned to be told he had died. Though the brain tumour would have killed him eventually, I feel like my dad wanted to go peacefully and not let the tumour choose when he was going to die.

I often reflect on those few months and think if there was anything I could have done or if we had noticed it sooner, would the outcome have been any different? But with his type of tumour he would have had a maximum of probably two years, so there is nothing I could have done. Brain tumours are such evil things and it’s so important that research is carried out now to offer families in the future more treatment options.

Though I have had to go through upsetting events in my life, losing my dad was the worst heartbreak imaginable. My dad always showed resilience to everything that we faced as a family, and that is a characteristic I will try to demonstrate for my own daughter.

My daughter is now nine years old and such a fun-loving little girl. It’s such a shame that she will never get to grow up with a grandad, however I will never stop sharing memories I have of him with her and hopefully making new memories as a family. 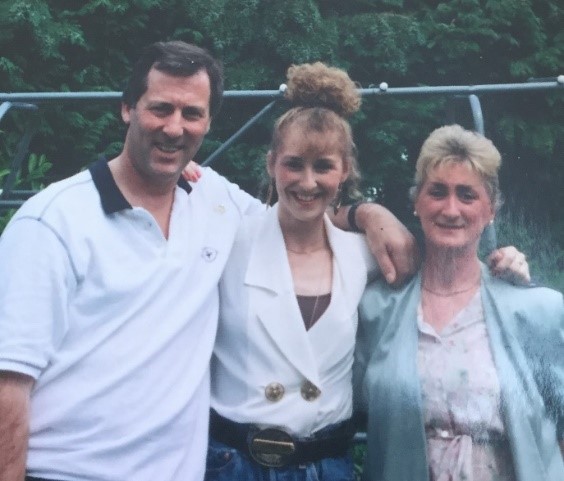