Welsh toddler Abigail Burrows was 21 months old when, in April 1996, she was diagnosed with an aggressive brain tumour. She died shortly after an operation to remove it, just six days after the diagnosis. Her brothers, Grant and Dale, were 13 and 11 when she died and her mum Kazzy was seven months pregnant with her younger brother Sam, who was born seven weeks to the day after her tragic death. Kazzy, originally from Swansea, but now living in Pembrokeshire, went on to have another daughter, Poppy, born in 1997 and she also has a stepson, Will, now 26. The pain of losing a child has never left her and not a day goes by when she doesn’t remember her ‘extraordinary’ little girl, Abby. This month, Kazzy, now a grandmother-of-two, is taking part in the 10,000 Steps a Day in February challenge in memory of her daughter and to help prevent other families from experiencing such devastation.

Abby was the cleverest, brightest, chattiest little girl ever. She had an absolutely incredible vocabulary. She really was extraordinary. I sometimes wondered afterwards if it was the tumour growing so fast on her little brain that made her so advanced. 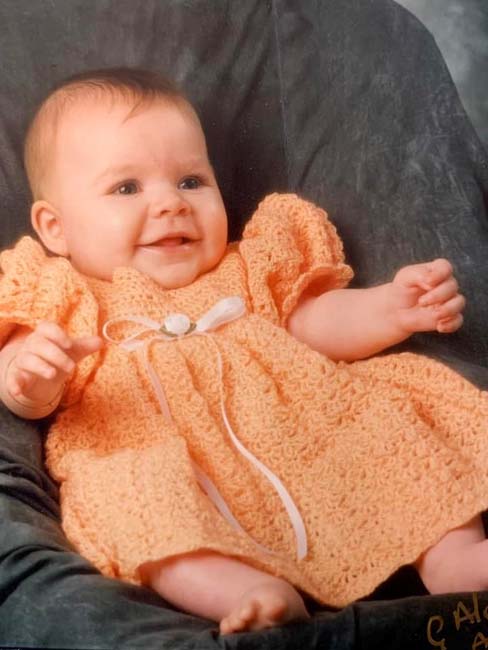 “I first noticed something might be wrong with Abby in 1995, around Christmas time. She was 18 months old and was running around one day when suddenly, she just keeled over for no apparent reason.”

She hadn’t tripped on anything; she just fell over. I also noticed that when I lay her down to change her nappy, she would cry a lot. She almost seemed scared. The same thing happened when I put her in her car seat. I took her to the doctors several times and they just kept saying it was an ear infection. She was given antibiotics but the symptoms would persist, so we’d go back to the GP only to be given more antibiotics. At one point they did look into the possibility of it being epilepsy. I remember thinking that was the worst thing it could have been. How wrong I was.

By March 1996, she’d stopped eating. I’d begun to think it was a brain tumour. We didn’t have Google back then but I did my own research and my mother’s instinct told me that something really wasn’t right. I’d had two healthy boys, so I knew something was different with Abby. I started telling the doctors that I really didn’t think it was an ear infection. One GP asked me what I thought it was. I couldn’t bring myself to say the words ‘brain tumour’ out loud, for fear that it would come true. 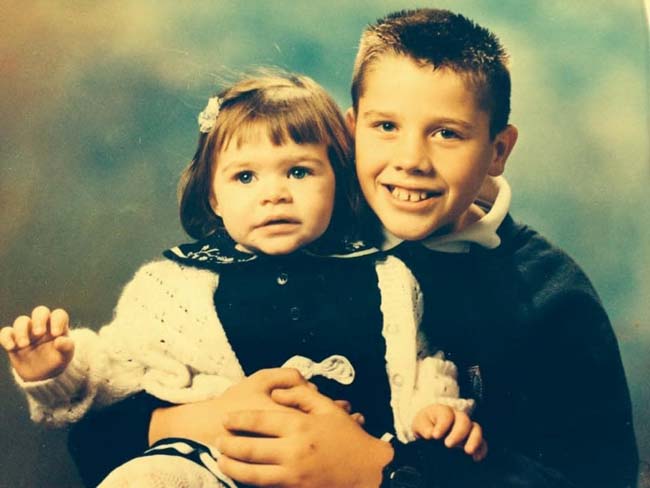 Eventually, at the beginning of April, we got an appointment with a consultant at Singleton Hospital in Swansea. He said to rule out anything serious, they’d give her an MRI scan. She had to be anaesthetised for the scan and it was really scary. Paul, her daddy, and I waited anxiously for news. When they finally came to show us the scan images, we couldn’t believe what we were seeing. The doctors said she had a brain tumour, just as I’d feared.

It was the Thursday before Easter, so although they said Abby would need urgent surgery, it was delayed slightly due to the bank holiday weekend. On Good Friday, the doctors encouraged us to go out and get some fresh air, so we took Abby for a walk in Singleton Park, just down from the hospital. I remember distinctly that it was a beautiful spring day and the park was packed full of families with young children enjoying themselves. There were daffodils popping up everywhere. As I looked around and tried to take everything in, I felt like I was in a different reality to everyone else. It was such a surreal but somehow lovely afternoon. I have a precious photograph of Abby from that day, she’s wearing a little blue coat and is looking straight down the lens at me with her big blue eyes. It’s hard to believe just how poorly she was when you see her in that lovely picture. 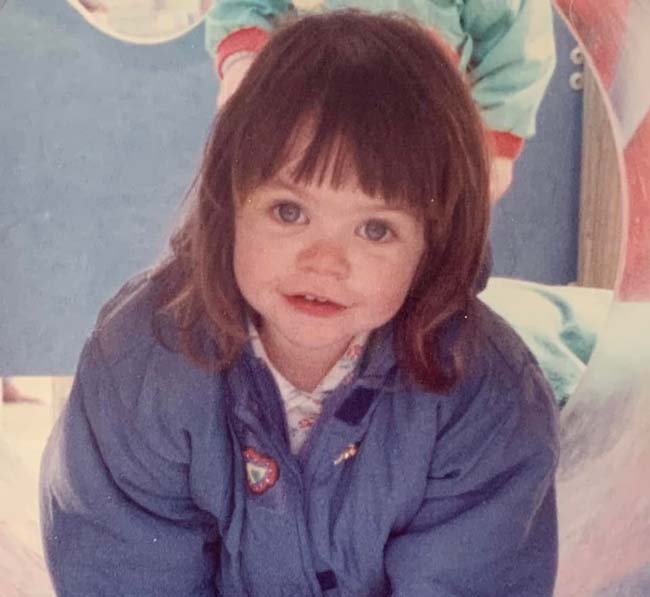 As the days passed, Abby became more and more sick and she was getting weaker. It was touch and go whether she’d be well enough for surgery but by the Wednesday after the Easter weekend, it was decided that they would go ahead and she was taken to Morriston Hospital in Swansea for the operation. It was a really long op. I didn’t know what to do with myself, so I went home and cleaned my house from top to bottom. I remember somebody knocking on my door as I cleaned frantically and it scared me to death; I screamed, thinking someone had come to tell me that Abby hadn’t made it. Eventually, after an excruciatingly long day waiting for news, Abby’s medical team rang and asked us to go back to hospital. When we got there, the consultant said he hadn’t managed to get all the tumour, which we were expecting, but as far as he was concerned, it had been successful.

“Paul and I went to see her in recovery. She looked so tiny hooked up to machines beeping. There were so many tubes and wires.”

I’m not medically trained in any way and it was terrifying to see her like that. I felt so overwhelmed. The staff were lovely and gently suggested that we tried talking to her, in case she could hear us. Abby’s daddy thought it might be a nice idea to get her favourite book – Snow White and the Seven Dwarves – to read to her. He went off to fetch it from the ward while I stayed by her side, holding her hand. Then, all of a sudden, she opened her eyes, looked at me and said: ‘Mum’ and the alarm on the machine signalled her heart had stopped. Within seconds, staff rushed in and surrounded her bed, trying to save her, as I was ushered into the corridor. I knew she had died and I stood screaming outside the room, helpless. Paul came back holding her favourite book and I just looked at him and said: ‘she’s dead’.

We were advised to wait in a small side room and as we waited, for the first time in my life I understood the true meaning of the phrase ‘climbing the walls’. That’s exactly what I felt like I was doing. Distraught, I had to call our parents and my sisters, who all came as quickly as they could.

I remember all of us standing together at Abby’s bedside in utter shock and dismay. Paul was holding her, completely hysterical. Everyone was crying and wailing. It was totally devastating but also surreal. I was 33 weeks pregnant with Samuel at the time. I found it hard to take everything in. Meanwhile, a nurse appeared and gave me a carrier bag full of Abby’s belongings. I asked why she’d done that and she explained that they didn’t like to upset bereaved parents by asking them to gather their child’s things from the ward after they’d died. I found it so insensitive, however.

“Abby had only just died and I was being handed her possessions in a plastic bag. I was completely incensed.” 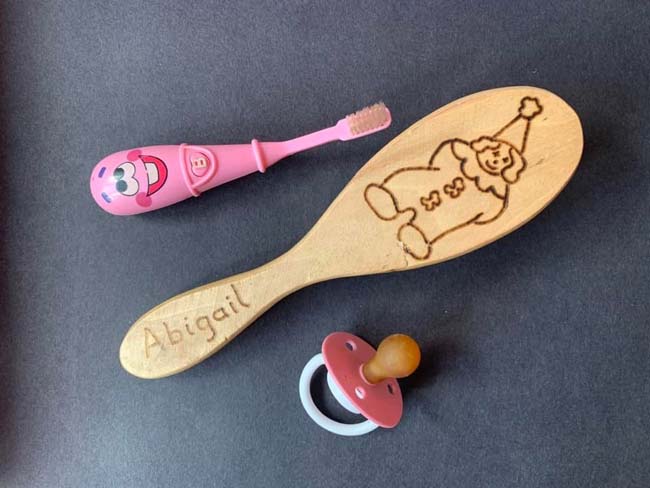 We went home and I had to tell my boys that their sister had died. It had a huge impact on both of them, especially my eldest, Grant. I was only weeks away from giving birth and I had to plan my daughter’s funeral. That whole period in between Abby dying and Sam arriving is a blur. It was hell; I was completely grief-stricken but somehow had to keep going to look after my other children and prepare for the imminent arrival of my fourth child. I wouldn’t go out because I was frightened of what people would ask me. I didn’t want to have to explain to anyone what had happened and to have to deal with their reactions.

Even though we’d been told that Abby’s tumour was ‘one in a million’, I was worried in case the baby I was carrying had one too. The doctors did a late scan to check for any abnormalities. They didn’t find anything of concern and at the scan, they said I was having a little boy. It felt right.

When Sam arrived, he was the image of his big sister. He had the same colouring; the same blue eyes. He was a ray of sunshine in the darkness. Not long after welcoming Sam into our family, I was determined I was going to be pregnant again and 15 months later, my daughter Poppy Abigail arrived. She looked nothing like Abby whatsoever but was another blessing and ray of hope after experiencing such heartache. I’m glad I’ve got a big family. Having more babies definitely kept me busy but it’s hard to explain the challenges of grieving one child and giving birth to another at the same time.

Abby had wonderful godparents; they were relatives of her dad’s. After we lost Abby, her godfather said something to me that was so profound, it has stuck with me ever since. He said that a person’s life is their life and that it shouldn’t be measured in terms of weeks, months or years. Instead of time, we measure my daughter’s life in terms of how full it was. Abby died two months before her second birthday. She may have only had one birthday in her short life but she had the happiest little life, full of joy, and she was utterly adored by all of us.

“She was happy and clever. She attended a lovely nursery, played every day with her cousin, and went on lovely holidays. It was a beautiful life.” 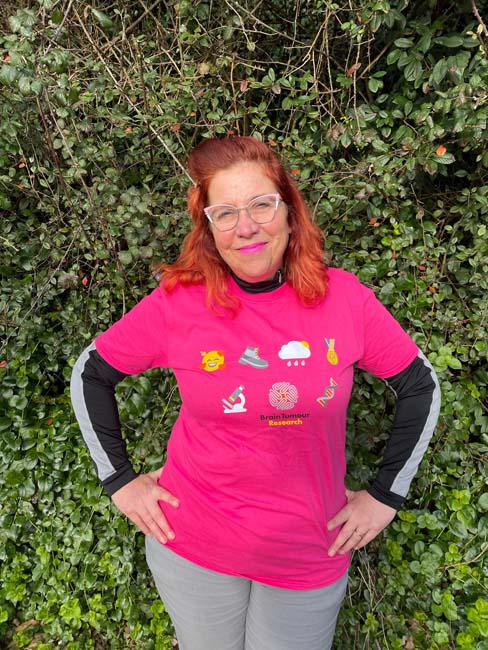 Ever since the day Abby left us, I have had tears behind my eyes, a lump in my throat and an ache in my heart. I have done lots of fundraising over the years for various different cancer and children’s charities but this month, I am raising money for Brain Tumour Research for the first time. I’m taking part in the charity’s 10,000 Steps a Day in February challenge for Abby. I hope that my walking will help to fund research into brain tumours so that a cure can be found. 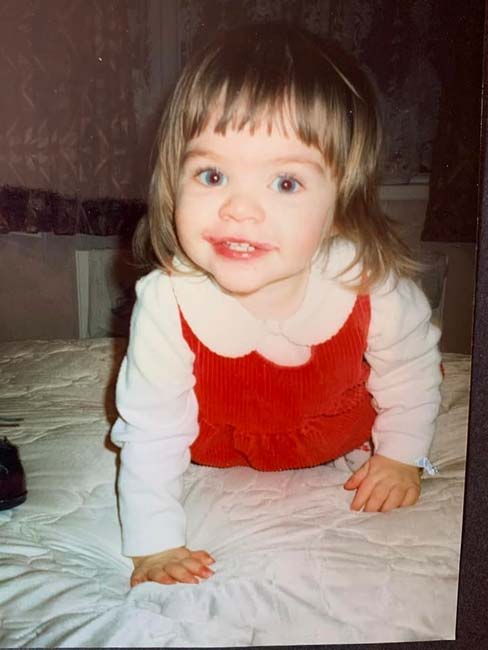