Dale, a musician, was diagnosed with a glioblastoma (GBM) brain tumour in early December 2017 after suffering a number of seizures and then an excruciating headache with vomiting.  He underwent surgery, radiotherapy and chemotherapy and was stable for a few months until an MRI scan revealed regrowth. Dale was turned down for further surgery on the NHS, but had a craniotomy privately. Five days later, he woke with a terrible headache which led to a seizure, lost consciousness and died of a cerebro-oedema on 25 September 2018 at 32 years old.

Dale and I met on the Glasgow music scene in early 2012 when I was 20 and had just finished university. Dale was 26 and had a day job as a stonemason. I was performing as a singer/songwriter at the time, while Dale was the frontman and lead guitarist of the rock ‘n roll band, The Amazing Snakeheads. We met and hit it off immediately, realising we both shared the same goals and a huge passion for music. Watching Dale perform was something else; like he’d been taken over by a power bigger than himself. He felt each musical note with every ounce of his being. Dale forged a path for many other young budding working-class musicians in the community, always offering words of support and encouragement to anyone who needed it.

The Amazing Snakeheads signed to Domino records and released their album, Amphetamine Ballads in 2014, but just over a year later, they disbanded due to differences of creative opinion. Dale was always true to his heart and had the integrity of a saint; ending the band was sad and difficult but he knew it was the right decision.

In January 2017, Dale and I packed up our instruments, amplifiers and some clothes into a tiny Ford Focus and drove from Glasgow to Berlin. We came together with new friends and formed a band titled And Yet It Moves. We lived in Berlin for almost a year and worked on our album Free Pass to the Future (released in 2017). 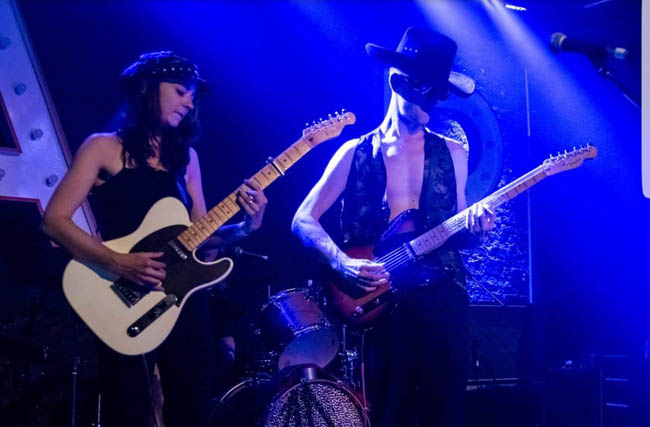 Fast forward to 9 November 2017, we travelled from Berlin to Frankfurt to play a show. We went outside the venue for a break after our sound check. Dale collapsed and suffered a full-blown seizure, completely out of the blue, breaking his shoulder in the process. It was as if he was dying right in front of me. It was too scary to put into words.

Dale was then taken to hospital where we discovered it cost €3,000 for one night’s stay  – the reciprocal arrangements we had then pre-Brexit with other European countries only covered seeing a GP. We went home to Glasgow and turned up at A&E at the Queen Elizabeth University Hospital only to be told that they would only do a scan if Dale had another seizure.

I remember feeling seriously worried because we had another tour coming up the following week. We didn’t have a diagnosis or any answers on why the seizure occurred, but, in true Dale style, he was adamant that we went ahead and played the tour regardless.

It was the third night of the tour in Portsmouth when Dale had another seizure. We went to University Hospital Southampton but, once again, Dale was refused a scan and we were sent away. We immediately flew home to Glasgow. 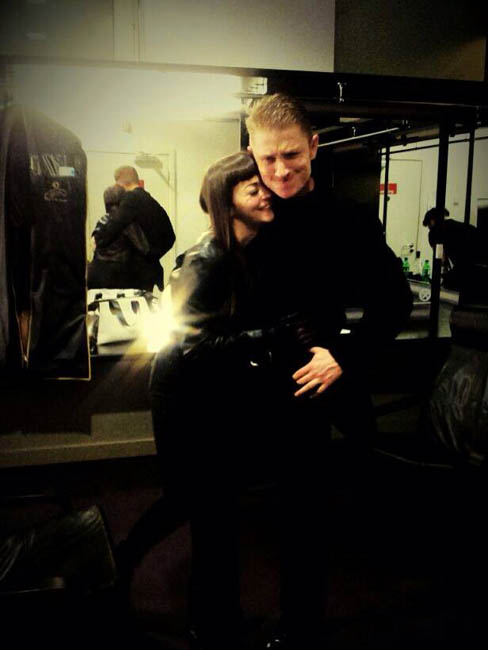 A couple of weeks on, Dale was complaining that his head felt like it was about to explode and he started vomiting. This time we managed to get A&E doctors to take him seriously due to the combination of seizures, vomiting and a severe headache. Four weeks after the onset of symptoms, they performed a CT scan which revealed a lesion, prompting an MRI scan. We were then told that Dale had ‘a mass on the right frontal lobe’.

Dale underwent surgery and a biopsy and was given the results a couple of days after his 32nd birthday.

“They told us Dale had a glioblastoma (GBM) and that it was incurable. He sat there shaking. I was so traumatised I ended up screaming, although not in front of Dale. We were living a nightmare.”

Later I googled GBM and seeing the grim statistics was too much to bear. I spent lots of time in desperation, trying to find any treatment out there that had ever shown any promise. We also connected with groups on social media for support. Dale did less research at first, it was too overwhelming. He preferred to focus on the positive, listen to the doctors and take each challenge as it came.

A couple of weeks after his diagnosis, Dale decided there was no point in asking ‘why?’.  Although we prayed Dale would be a long-term survivor, we made a pact to remain positive and do as much as possible in the time we had. We finally got married on 20 January 2018 after a three-year engagement. Aside from the treatments which Dale handled like a champion, we spent most of our days writing and recording, talking, eating and meditating. Dale even tried a bit of yoga. He was always so resilient, but I suppose he had no choice this time.

Despite the diagnosis, the first seven or eight months are full of beautiful memories, especially our time recording music. I remember a day in the studio when Dale blurted out: ‘Do you ever just forget you have brain cancer?’ The studio was a healing place for Dale – he immersed himself so much in the process that he forgot about the world outside. That day was a good day.

During this time we managed to get Dale on a clinical trial, but it was only a phase one. Dale also had the standard radiotherapy for six weeks and then oral chemotherapy.

“The scans kept telling us Dale was stable until in July 2018 when he had three seizures in a row. The scan that month showed the tumour had doubled in size.”

Dale was adamant he wanted to go for a second surgery as the standard treatment had done nothing. We were told by his oncologist that there was little point: due to the aggressiveness, the tumour would simply grow back.

We decided to go private and started crowdfunding to raise the money we needed. Thanks to a huge outpouring of love and support from the music scene, Dale was able to have the surgery. His Harley Street neurosurgeon was very confident as Dale had had no side-effects, except to his short-term memory after the first surgery, that he seemed to be a perfect candidate for a second operation. 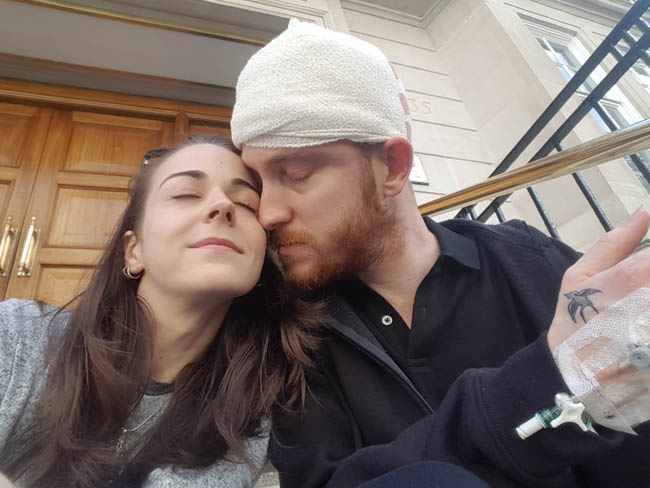 Dale had a second craniotomy on 20 September 2018.The operation went well and he was discharged three days later. We were on a bit of a high and had been home for two days when Dale woke up with a severe headache which led to a fatal seizure. By the time we made it to the hospital by ambulance, Dale had lost consciousness and would never wake up. We were told he had a cerebral oedema which is a term for swelling in the brain. A further scan showed there had been no bleed but the swelling was traumatic and irreversible. The cause of death was noted as cerebral oedema, with glioblastoma a secondary.

“I mistakenly had thought that if there were to be any complications, they would happen during surgery, not five days later. Now I comfort myself with the memory that we had enjoyed a lovely meal and talked for hours the night before we lost him”

I’m glad Dale was able perform his final gig on 29 July 2018, only two short months before he departed. I am so thankful he wasn’t bed-bound for a month or more before he died like so many brain tumour patients. This was a small blessing.

Dale and I were so close, almost joined at the hip at times; it felt like a once in a life-time connection. During the seven years we spent together, we probably experienced double the amount that many couples manage in this short time. We had so many more plans and hopes for our future… but it wasn’t meant to be.

Four years on, in some ways it feels just like yesterday. It’s still hard to listen to the music we both loved; Dale is everywhere, in every song, decision and challenge. He led the way and taught me so much. I have incredible memories and so much to be grateful for. I try to focus my thoughts there. 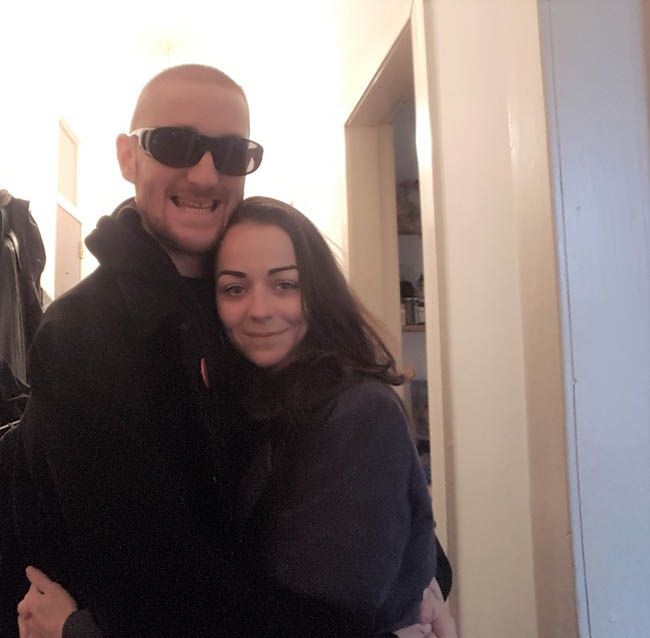 I am 30 now and life has changed a whole lot. Dale and I were always city dwellers and loved the buzz of a crowd. Since losing Dale I have moved out of Glasgow, living around family and closer to the countryside. Two years ago I welcomed a dog into my life and named him after Dale’s favourite country singer, Hank Williams. He’s a good boy and has been a much-needed companion through my grief. 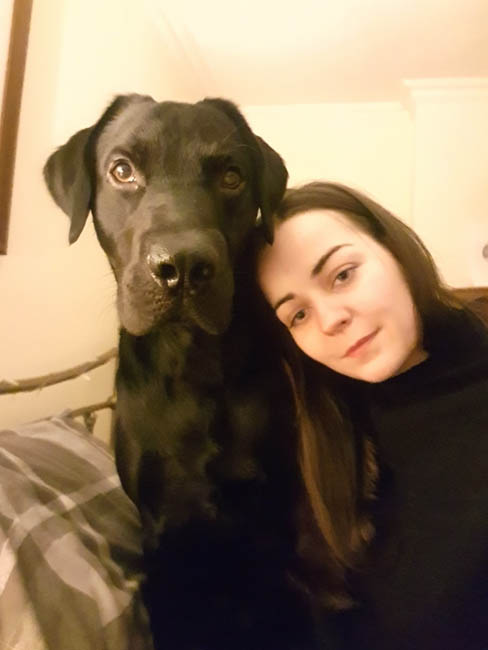 Having lived in isolation during the pandemic, I am now setting up the Dale Barclay Fund, a Fundraising Group for Brain Tumour Research. I found it shocking that there was no effective treatment available for Dale, and that the NHS standard care protocol was mostly ineffective. It’s so cruel to hear that the disease you have is incurable, particularly when you have your whole life ahead of you. I want to help fund research that will move us towards extending life for brain tumour patients. I hope to see more late-stage clinical trials available on the NHS. My heart goes out to anyone currently going through a brain tumour diagnosis, I hope by raising awareness and doing some fundraising, we can help push things forward to inspire hope and further research.

Before he died, Dale wrote and recorded a song called Wild at Heart, which I finished in his memory. I’ve released this track both digitally and on physical vinyl, with all profits going to Brain Tumour Research. We’ve sold 200 vinyl copies to date, just 100 more to go!

Life can change on a dime. Nothing is safe. Even after everything, Dale’s death still came as a huge shock. Now I try and focus on my music and the simple pleasures in life. It’s easy to take life for granted.

“Although a heavy weight to bear, I’m blessed with a whole new perspective on how fragile our time is.” 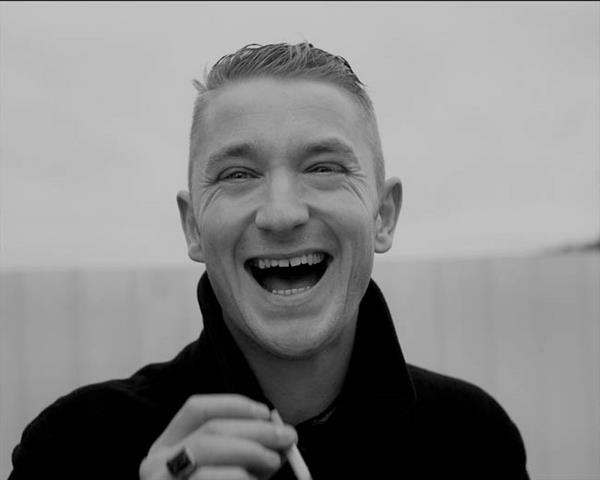