Tom was a teenager when a problem with his eyesight was spotted in examinations as he prepared to join the army. He was diagnosed with four brain tumours which, following treatment, are stable. Twelve years later Tom is married with two children and tries to remain positive although no-one can tell him what the future holds.

“I was 18, had met a lovely girl, and was planning to join the army when I was diagnosed with multiple brain tumours. I felt as if my life had ended before it had really begun. The diagnosis meant I had no chance of serving my country in the armed forces. I had to give up work and could no longer drive and no-one really knew what lay ahead or how much time I had left.”

I was 18, had met a lovely girl, and was planning to join the army when I was diagnosed with multiple brain tumours. I felt as if my life had ended before it had really begun. The diagnosis meant I had no chance of serving my country in the armed forces. I had to give up work and could no longer drive and no-one really knew what lay ahead or how much time I had left.

There were many, many tears both mine and from my friends and family but, above all, I felt angry and the emotion was so intense that I had a meltdown and smashed up my room. I smoked heavily and drank too much – after all, what did it matter? I felt as though I was living with a death sentence. There were times when things felt so bad that I felt like ending it all.

I have blocked out a lot of what happened and only now do I feel I can talk about my experiences. It was impossible to understand how I could be so ill yet I had always been fit and active, having played rugby at school and reached a high standard with the Dorset County squad and Sherborne RFC.

That was 12 years ago and while I still have the tumours, thanks to the support of those around me, I have found a way to carry on. Now I feel that I am living with this disease rather than dying from it. Hannah, the lovely girl who I had known for just a few short weeks when I was diagnosed, is now my wife. Despite being told the chemotherapy treatment I underwent would probably leave me infertile, we now have two beautiful children. I have a job, we have a house, and, most importantly, I feel I have a future.

I grew up in Gosport but moved away to Somerset with my family because of dad’s work. By the time I was 16 I was back and working on my fitness in preparation for joining the Royal Electrical and Mechanical Engineers (REME) as a tank mechanic. It was during this process that a problem with my eyesight was spotted. It was also around that time that I experienced the occasional stutter in my speech and was also having headaches. I had a lot going on in my life, I’d only known Hannah for a couple of weeks, and I was working on my army application, and just carried on, not thinking the symptoms I was experiencing were connected.

I had a scan at St Mary’s Hospital in Portsmouth which revealed there were four ganglioglioma tumours in my brain. They were grade one which is classed as low-grade and not cancerous although this could change over time.

Surgery has never been an option for me as it could leave me blind or otherwise permanently disabled. I underwent six cycles of chemotherapy and my eyesight got back to almost normal, the headaches stopped and the tumours stabilised.

Hannah and I got married in August 2011 and our daughter Cheryl-Louise was born in August 2013 and our son Oscar-Myles arrived in January 2015.

My tumour is stable, for now at least, and I have recently started taking cannabis-derived CBD oil which you can buy on the high street. I have talked to my consultant and am aware there is no medical research proving this works but it is helping me with anxiety and depression. Above all, it is really important to me that I know I am doing something positive for myself.

I will continue to have follow-up scans to keep an eye on the tumours but the truth is that no-one really knows what might happen and that is a very difficult thing to live with. I am travelling a long and difficult road and just have to keep on walking.

If you have been inspired by Tom’s story and would like to make a donation to Brain Tumour Research please go to https://www.justgiving.com/fundraising/carla-dewane or leave a gift in your will via https://www.braintumourresearch.org/legacy 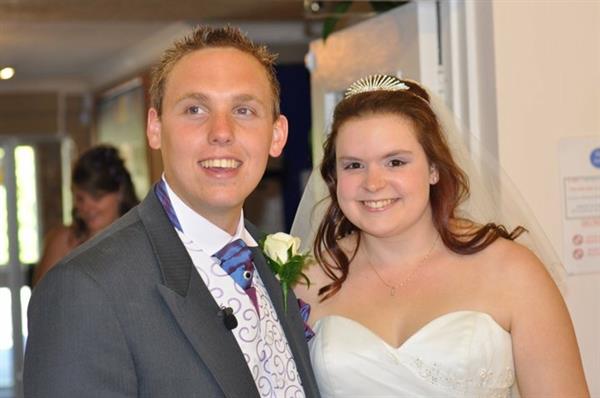