Two years after an abnormality was picked up during an eye test, foster carer Tina Papworth, of Southend-on-Sea in Essex, was diagnosed with a low-grade sphenoid wing meningioma. After a lengthy delay caused by the pandemic, in August 2022 the 54-year-old underwent a craniotomy. She is now adjusting to being completely blind in her left eye but feeling positive about the future.

When I first found out about my brain tumour, it knocked me for six. I’m the sort of person who processes things quite quickly but it was like a fog hanging over me for some time. There’s not enough awareness so, when you hear the words ‘brain tumour’, you fall to bits, even though in some cases you needn’t. I’m one of the lucky ones because mine was low-grade and operable, but I do feel quite guilty about not having a worse one and am keen to do what I can to help others cope with their diagnoses better than I did – if I can do that it’ll make it worthwhile.

I went in for a regular eye test and they asked if I wanted to spend an extra tenner to have a field vision test. I didn’t have any problems with my eyes but knew I was getting older and thought ‘why not?’ They picked up an abnormality and referred me to an eye clinic at Southend University Hospital, but that appointment was delayed for about a year because of COVID-19.

“When it did go ahead, they did a couple of tests and prescribed me drops for suspected glaucoma.”

When I went back in March this year, I really struggled with the field vision test and was told my eyes had deteriorated, which they shouldn’t have done with me using the drops. I told them I’d missed a couple of days because COVID had prevented me from being able to get repeat prescriptions through my doctor, but they decided to send me for an MRI to check that nothing was pressing on my optic nerve. I kept thinking they were wasting NHS resources on me and wondering why they were doing it but I had an MRI at Southend University Hospital, then another a few weeks later at Queen’s Hospital in Romford and finally a CT scan at St George’s Hospital in Ilford. 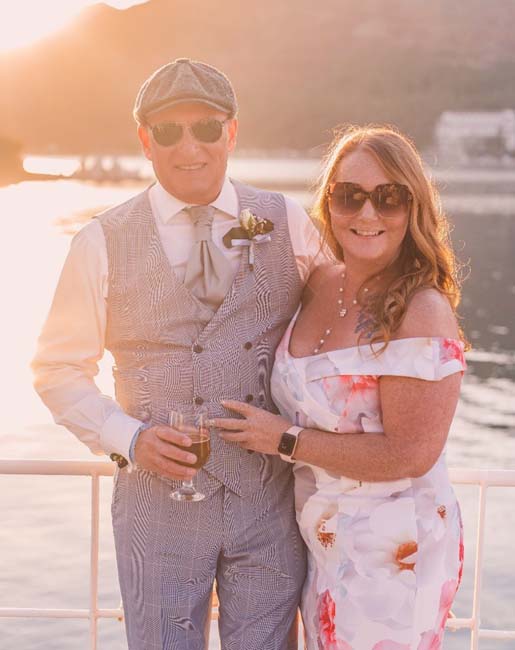 When I received a letter from the neurology department after my first MRI with details of an upcoming phone appointment, I found it strange that it hadn’t come from the eye clinic but when that call took place on 4 April, an hour earlier than arranged, and we spent the first 15 minutes talking about my eyesight, I let my guard down. Then the consultant suddenly said they’d found a large, low-grade tumour in a deep and tricky location but that they were going to drill into my skull to remove it. I was sitting down at the time and had tears running down my face. It was like a wave came over me and I just shut down. Deep, tricky and large aren’t three words you want to hear associated with your brain tumour.

“‘Is it a good one or a bad one,’ I asked, to which he replied: ‘well, there aren’t any good brain tumours but yours is non-cancerous’.” 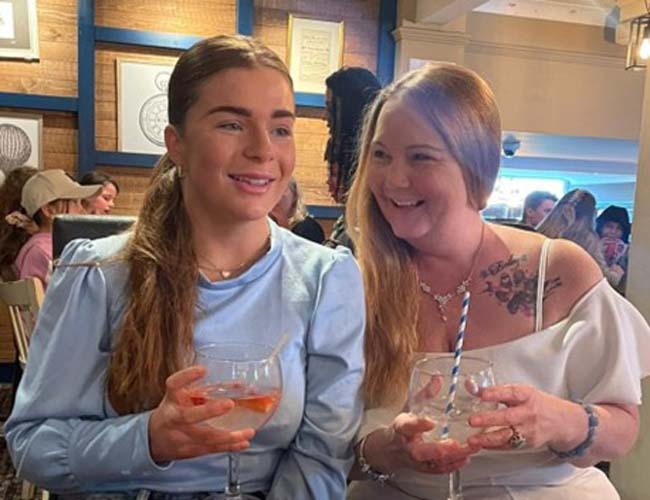 After that I was walking around in a kind of daze and, one thing’s for sure, google isn’t your friend in that situation. One thing I did appreciate, though, in hindsight, is that the consultant was quite blasé about how he came out with the news. It was obvious that for him, brain tumours are so routine that mine wasn’t a big deal. Also, when he spoke about it being big, tricky and deep, he sounded excited and that’s what I wanted him to feel in order to bring his A-game and make me as well as he possibly could. 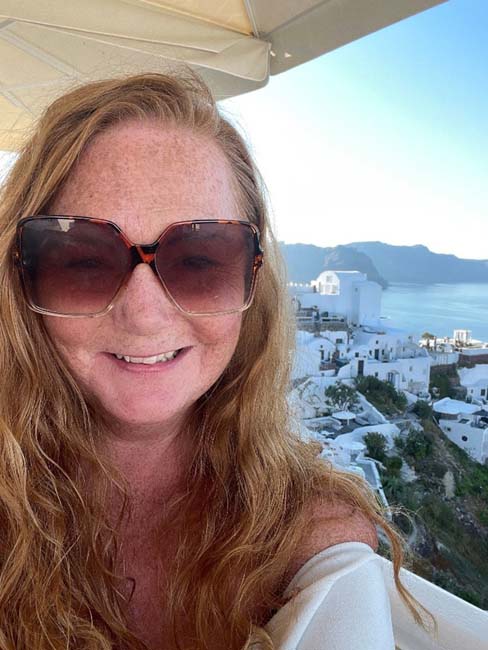 I went on holiday to Turkey shortly after my diagnosis. It was a trip that had been postponed for two years because of COVID and I remember being in a kind of fog the whole time because I was just processing everything. Once I was home, I found that my routine made me feel safer. When I was feeling like I couldn’t cope, routine really helped to keep me grounded. I realised there was nothing I could do to change my diagnosis; I had to face it and couldn’t hide from it and, even though there were times when I wanted to run away, having a routine made me feel a lot better.

“I also laughed and made jokes about my tumour; I take my health seriously but I think it’s important to maintain a sense of humour.”

It was only after doing so much research that I was able to feel optimistic about my future. You need to allow yourself to cry, to go into those dark spaces, feel and process but then you need to live your life. I decided to go public with my diagnosis on Facebook and TikTok because I think it’s useful to appease the fear in others entering into the same journey and I had so many people reach out to put my mind at rest. 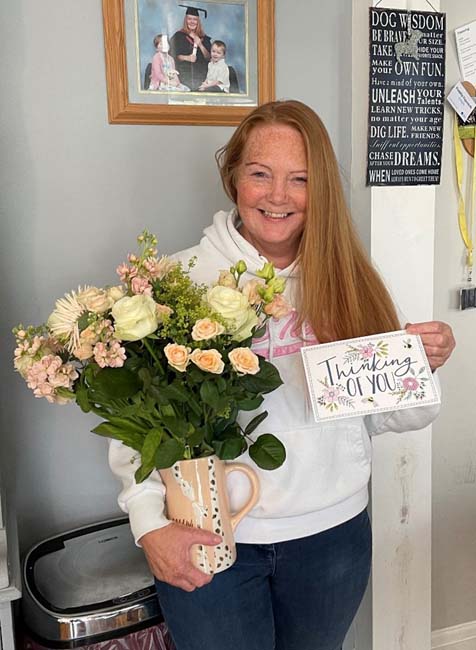 My sphenoid wing meningioma was about an inch in circumference. Starting from my skull, it was growing inwards and had attached itself to my brain, and what was described to me as the wallpaper around my skull and gone around my optic nerve. I didn’t have any recognisable symptoms but, looking back, I’ve been able to identify some things that I’d just put down to old age but now think my tumour could be responsible for, things like memory problems, struggling to remember words, fatigue and, for a couple of years, I thought I was quite depressed, which I’d been silently beating myself up about. 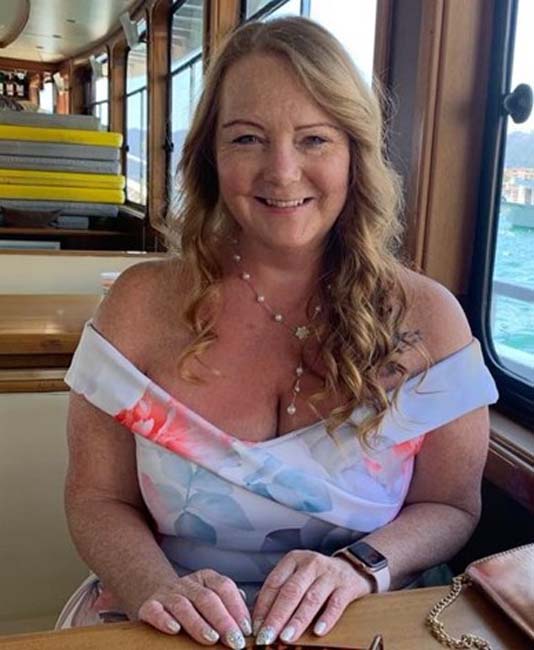 “I’m a glass half full kind of girl; I think it’s really important to keep a positive mindset so I started looking at my tumour as something positive.”

They found it early, it was operable and taking it out could actually help improve my memory, mood and eyesight. I had a provisional craniotomy booked in for 16 June but it was postponed until 17 August. The surgery lasted for almost seven hours. The tumour was tricky to remove because it was near my optic nerve, which I was warned could make me go blind. I was also told that my tumour had a little tail which they might have to leave behind, requiring me to need radiotherapy, but that doesn’t seem to be the case. 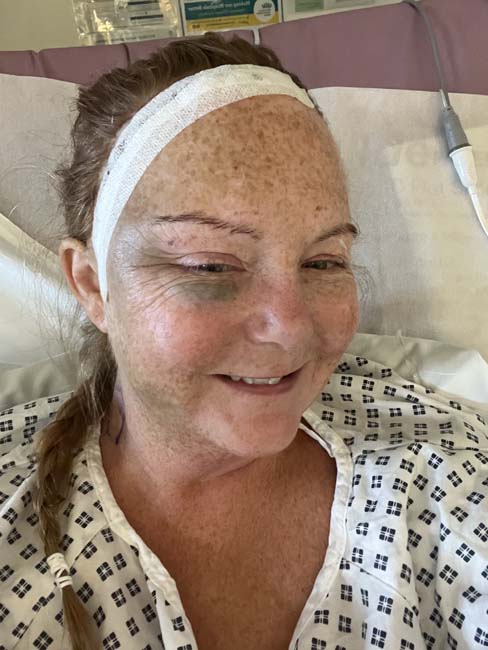 I was in hospital for a week after because I had a low heart rate that needed to be monitored, but otherwise my recovery has gone quite well. I thought that I had escaped blindness, which I knew to be a risk, as I thought that I could see light and shadows but that must have been my brain playing tricks on me because, since coming home, I’ve realised I’m completely blind in my left eye.

“I’m still waiting to talk to the neuro team at Queen’s about it but I’m so thankful to be alive that if losing my eyesight is the worst thing to happen, I’m OK with that.” 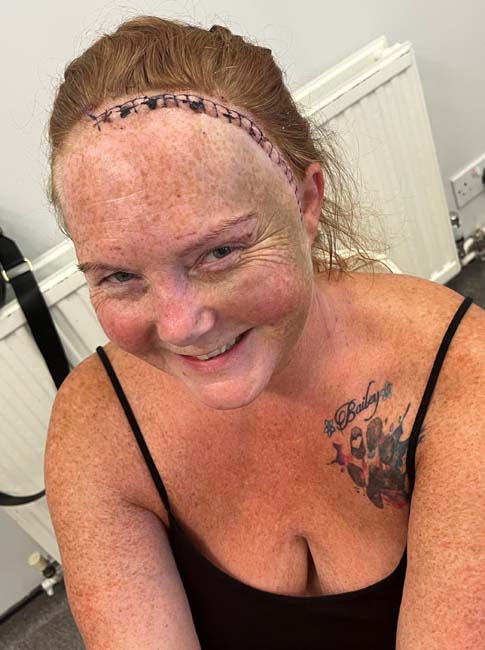 My depth perception is what’s causing me the most difficulty and I’ve found that I’m less confident in public and can get overwhelmed because of it, but I’m sure it’s nothing I can’t overcome in time, with practice. It’s not ideal but I’m alive and happy, which is the main thing. I haven’t really had a post-op appointment yet, which is frustrating because I don’t know what’s going on, but I’m content with being half-blind for the rest of my life if that’s what happens because there are brain tumour patients far worse off than me. I always say that you have good days and bad days but you can’t pack a bag and stay in the bad ones. You can’t feel sorry for yourself for that long; you’ve got to pick yourself back up again. 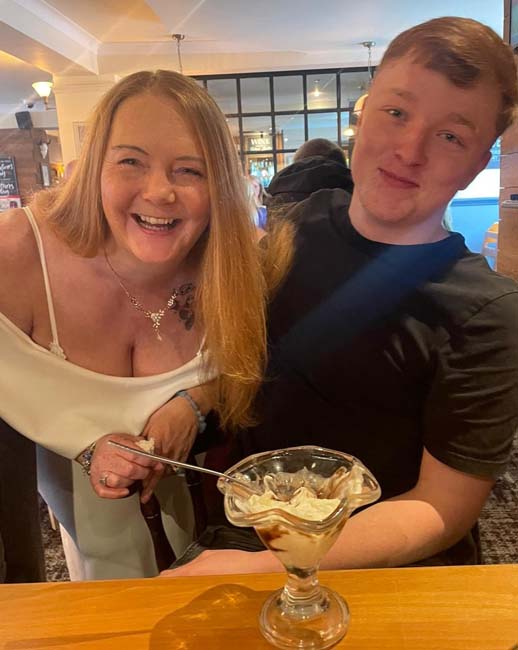 “It’s important for patients to remember that it’s not just them going through this.”

My brain tumour took over the life of my family. I’m a foster carer so I have six children, four that I still look after, and I’m a mum to many more. I’m also an only child so my mum was in bits. Having a brain tumour halts your life for a while and puts you in a suspended state until those around you have dealt with it. I’m lucky because I’ve got a rock-solid partner. I went into a dark place after my diagnosis and John was right there from day one to reassure me. 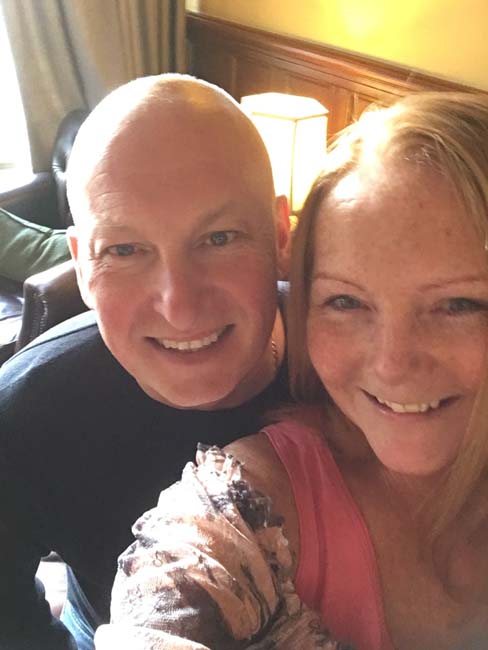 “I don’t want to fall to bits because I want my children to see me being strong.”

We don’t ignore things, we grab them by the scruff of the neck and we don’t let them win. I want my children to see me as a positive, brave person. I’m not crumbling to bits. I have my moments, obviously, but I’m a fighter and I’ve decided to choose happiness. We’re only on this planet for a limited time anyway; no one makes it out alive so I’m not going to let my brain tumour journey sadden my days here. I’m going to be happy despite it and I want my children to see that so they choose happiness as well. 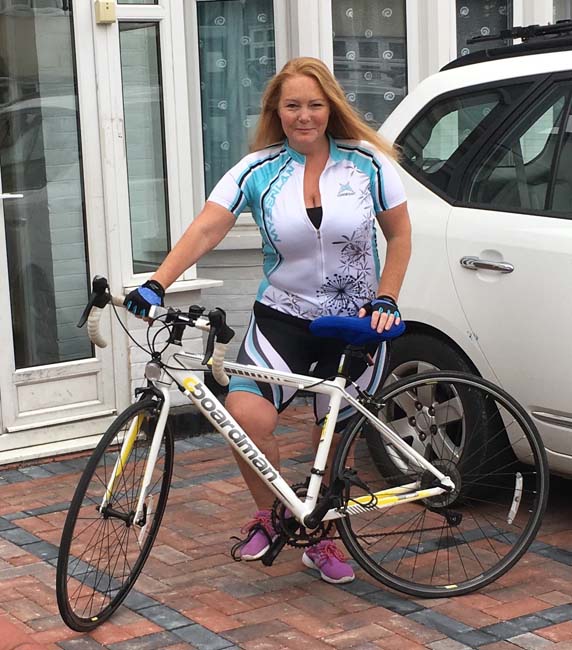 “To others going through this, I would say don’t be afraid to take control of your own health.”

It’s really important to keep all your notes organised and to write down questions because otherwise you forget things. I found the brain box provided by brainstrust, a Brain Tumour Research member charity, really useful and I’ve been documenting my journey on social media, partly for me but also to raise awareness; it’s shocking that brain tumours are the biggest cancer killer of children and young people under 40 and yet, historically, have received just 1% of the national spend on cancer research – that money needs to be shared evenly across all of the cancers. To follow my journey, search for @tina-t-pot.

I’ve also signed up to take part in the charity’s 100 Squats or Star Jumps a day in November Challenge. I intend to do some in fancy dress and John will join me for a few so I’m really excited about it and have set myself a target of raising £1,000. To sponsor me, go to www.facebook.com/481673757023877. 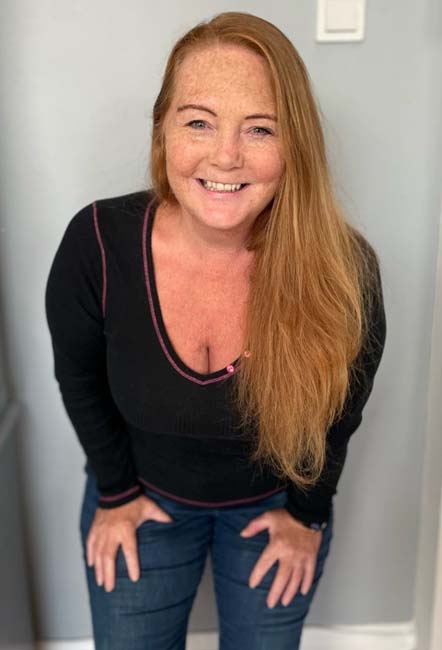