Staff sergeant Steve Blake, 37, was diagnosed with a meningioma in May 2017, after suffering from debilitating headaches while serving in the British Army. He had surgery and radiotherapy and is now doing well. He and his wife Becky, who tied the knot just 10 days after Steve’s operation, are expecting their first child together and are feeling optimistic about the future.

A lot has changed since my brain tumour diagnosis two years ago. I’ve got married, started a degree, had a promotion and now my wife Becky and I are expecting our first child together. Achieving these goals has been extra special knowing all that I’ve gone through to get to where I am today.

Becky and I are excited to welcome our baby boy into the family; he is due in September. We’ve been preparing the house, attending antenatal classes and, while we are somewhat apprehensive, we can’t wait to meet our son.

“I had feared that my treatment would affect my fertility and I’m relieved that this wasn’t the case.”

Becky has been my rock throughout the difficult times and nothing was going to stop us tying the knot – not even a brain tumour. We got married in August 2017, just 10 days after my emergency surgery. My scar was my war wound and, though I felt very fatigued from my operation, our marriage was a massive positive during a very tough time.

“Remarkably, I live with the same brain tumour as my mum: a meningioma. Mum had experienced black-outs throughout my childhood, eventually requiring surgery to remove a massive tumour. Fortunately, she’s had the all-clear for years.”

It’s great to be back at work and I’ve recently taken up a position as a manager for a video production team, in Deepcut, Surrey. I’ve served in the army for more than two decades and my colleagues have been incredibly supportive; it’s as if I’m part of a big family. I’m also studying for a degree in leadership and management, a distance learning course with Northumbria University. I’m on track to graduate at the end of the year.

It’s amazing to think of all I’ve achieved since my diagnosis and I would like to give hope to other patients – that life can get better after being diagnosed with a brain tumour.

It all started in February 2016, while I was working as an army photographer, based at RAF Halton in Aylesbury. I suffered from frequent headaches and blurry vision. The headaches didn’t seem to get better, although my vision normalised after a bit. I saw a doctor, only to be told it was probably a sinus infection, and was prescribed nose-sprays, decongestants and antibiotics.

The medication didn’t work and over many months I saw several different doctors who didn’t seem to know what was wrong with me. Medically, things came to a head in May 2017, when I finally had enough of the constant headaches. I was referred for a scan and the next day a military doctor told me that there was something growing in my head that shouldn’t be there.

“The hardest part was telling my son Joseph, who was just 13. His only experience of brain tumours was seeing his friend lose his mum to a particularly aggressive form of the disease.” 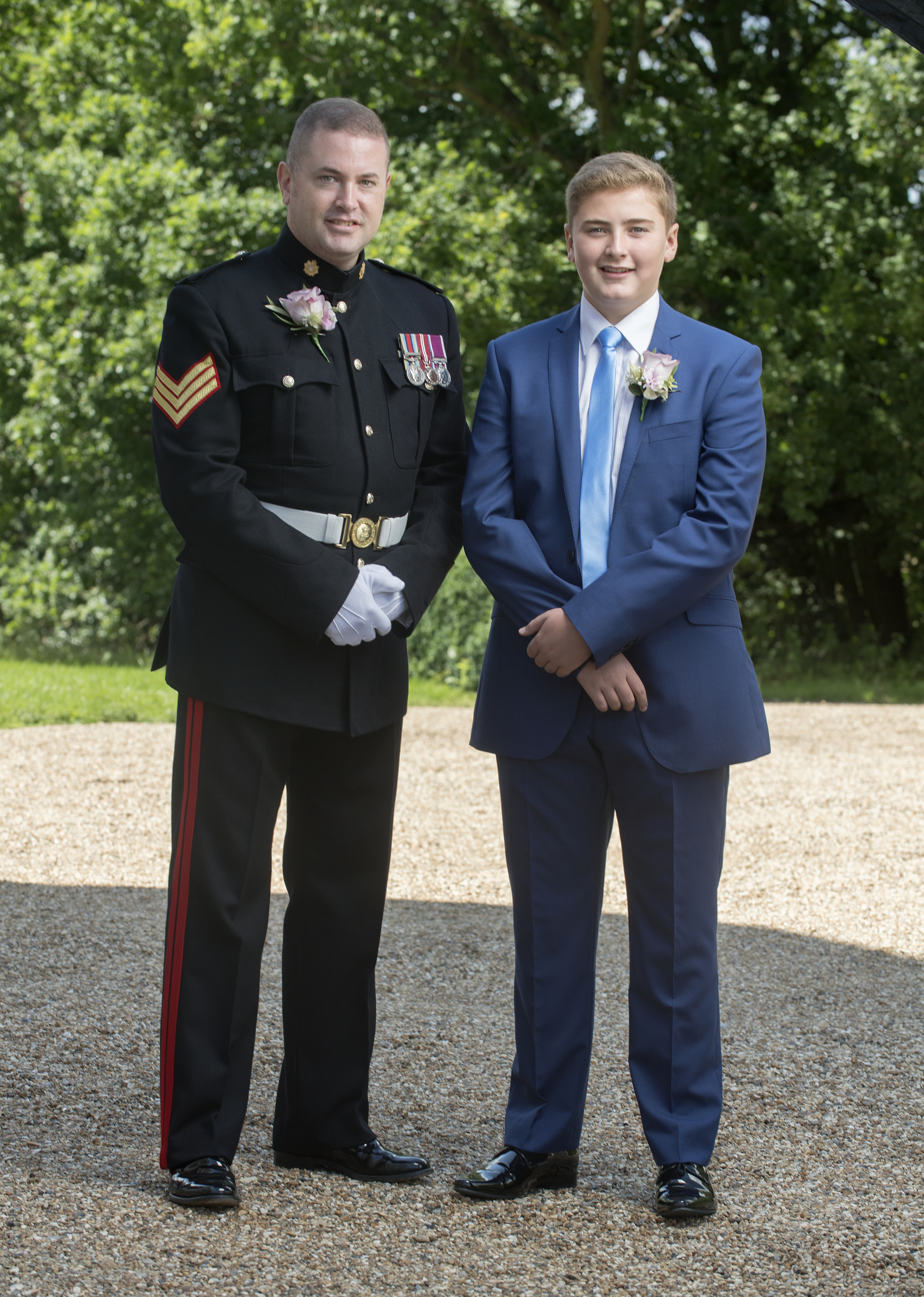 A few weeks later I had a follow-up appointment at the John Radcliffe Hospital in Oxford, where I was diagnosed with a meningioma. It was the best-case scenario as the tumour was unlikely to become cancerous, so the doctors didn’t recommend immediate treatment. The brain tumour was on the back of the sinus canal, which explained the sinus symptoms I had experienced. 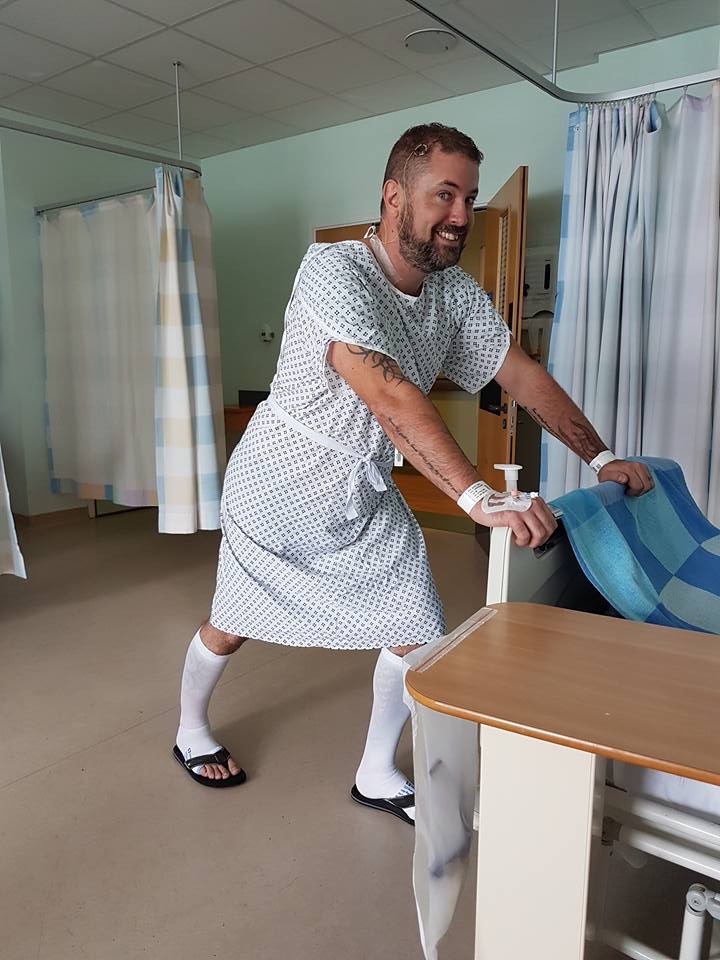 Due to the location of my tumour, there was a dangerous amount of fluid build-up on my brain. I had three surgeries at the John Radcliffe to drain the fluid, and the pressure was on to recover in time for my wedding a few days later.

“Becky and I were married at Highfield Park in Hook and it was a very special day, with our family and friends around us. I was still pretty tender but managed to stay up till midnight, before having to rest.” 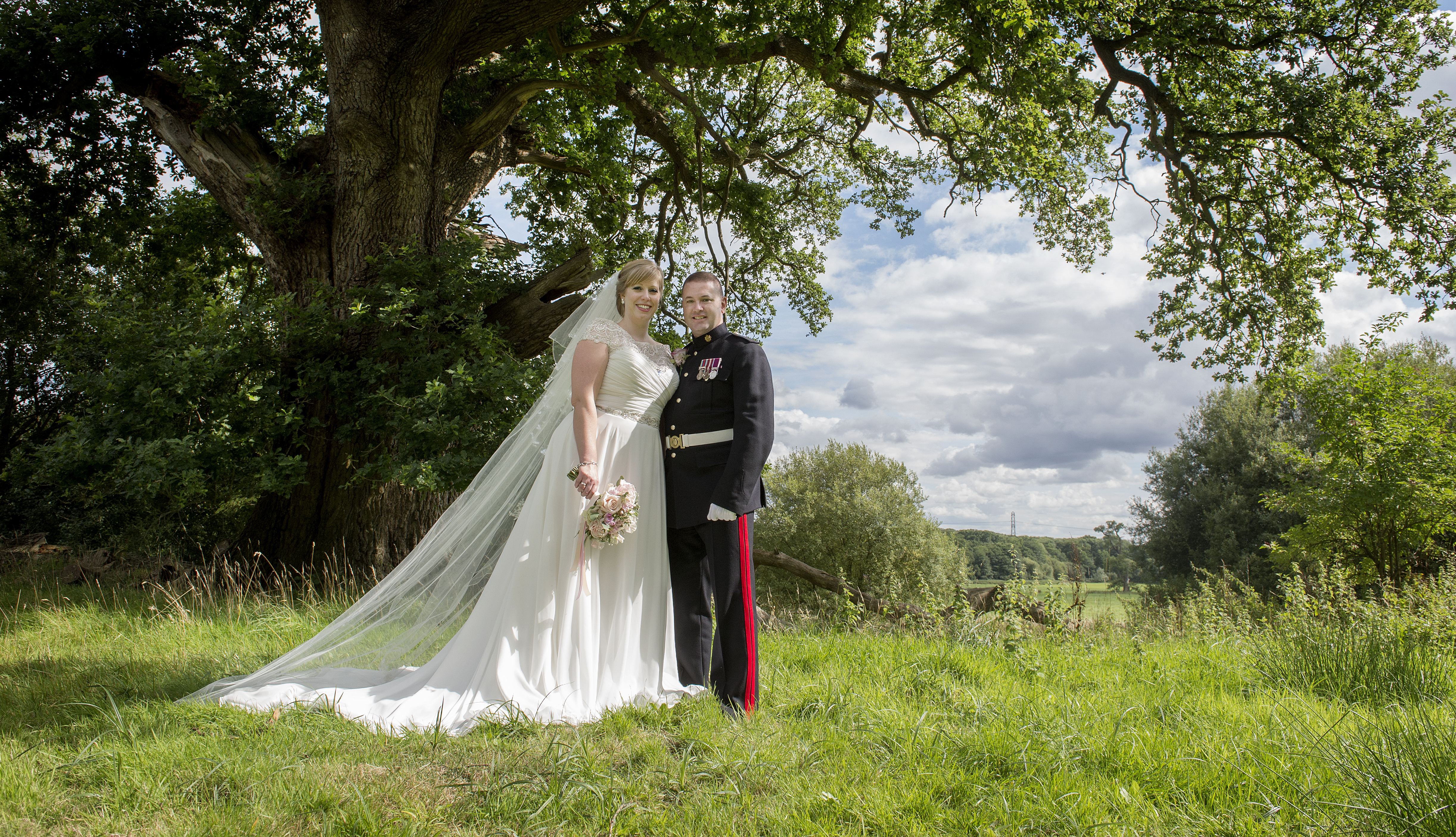 I returned to work in January 2018 and it was great to be back with my team and in uniform, which I have proudly worn for more than 20 years. It was important for me to regain a sense of routine after such a turbulent couple of years.

The normality was short-lived, however, as after a follow-up scan in May 2018, my doctor was concerned that my tumour had grown more than he’d anticipated, and advised I had treatment. I had a three-day course of radiotherapy at Southampton General Hospital and while the radiotherapy was painless and none-invasive, the effects of the steroids were horrendous. I gained weight and struggled to sleep more than three hours at night. 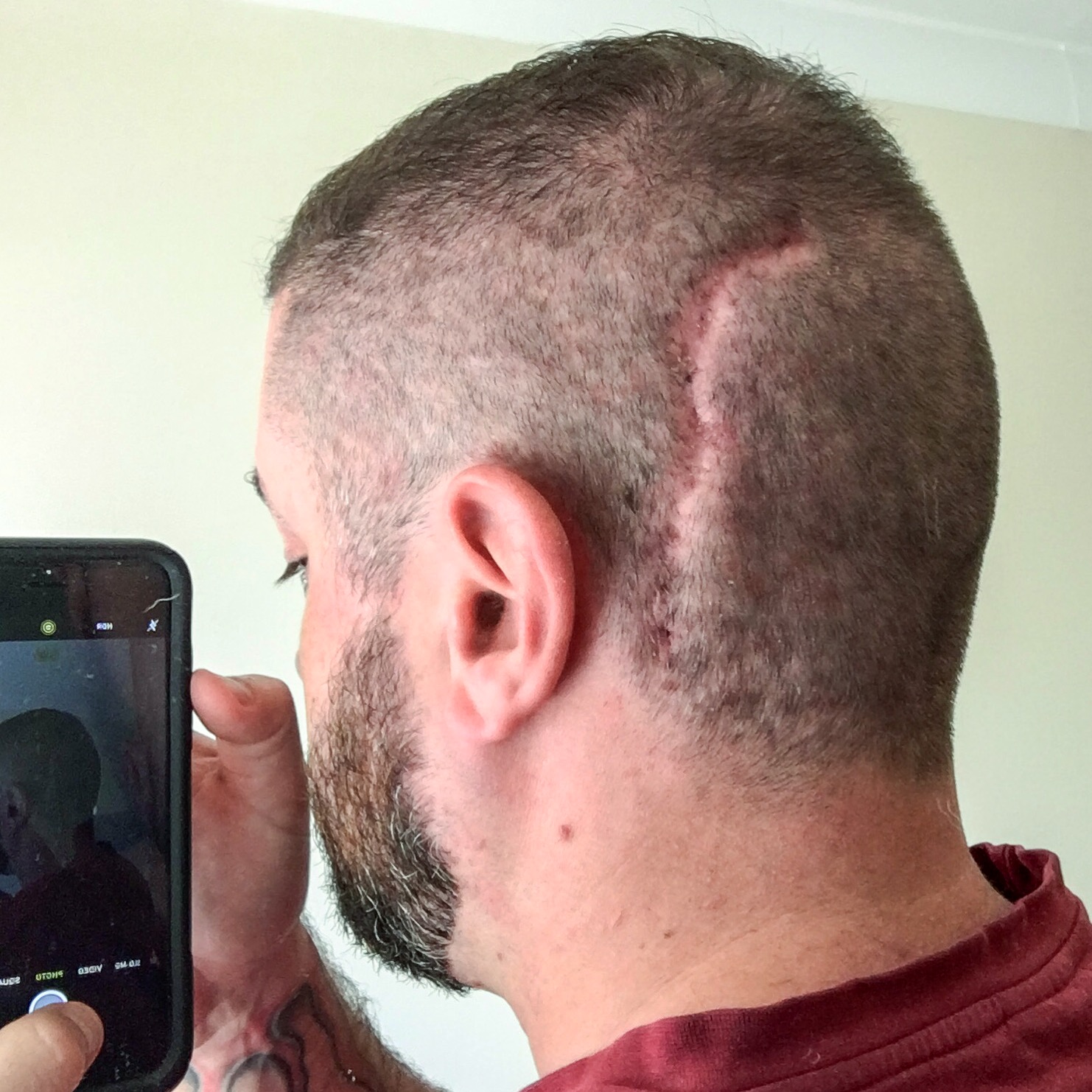 Becky and I were trying for a baby and we were worried the radiotherapy would affect my fertility. We were told that this would be extremely unlikely and a few months later we were delighted to discover that Becky was pregnant.

I recently had a follow-up scan which showed that the radiotherapy was effective and my tumour had shrunk by 0.9mm. It sounds like a tiny amount but my tumour is about the size of a cube of sugar, so it’s a positive result. 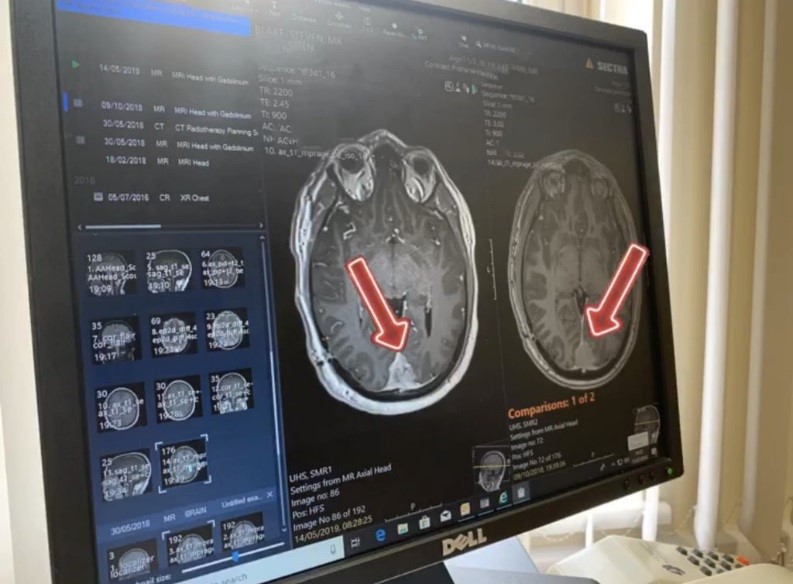 I’ve enjoyed fundraising for the charity Brain Tumour Research and I’m proud to have raised more than £2,600. My last challenge was a 25km hike along Dorset’s stunning Jurassic coastline with my close friend Ash and I’ve also participated in the charity’s Walk of Hope campaign. 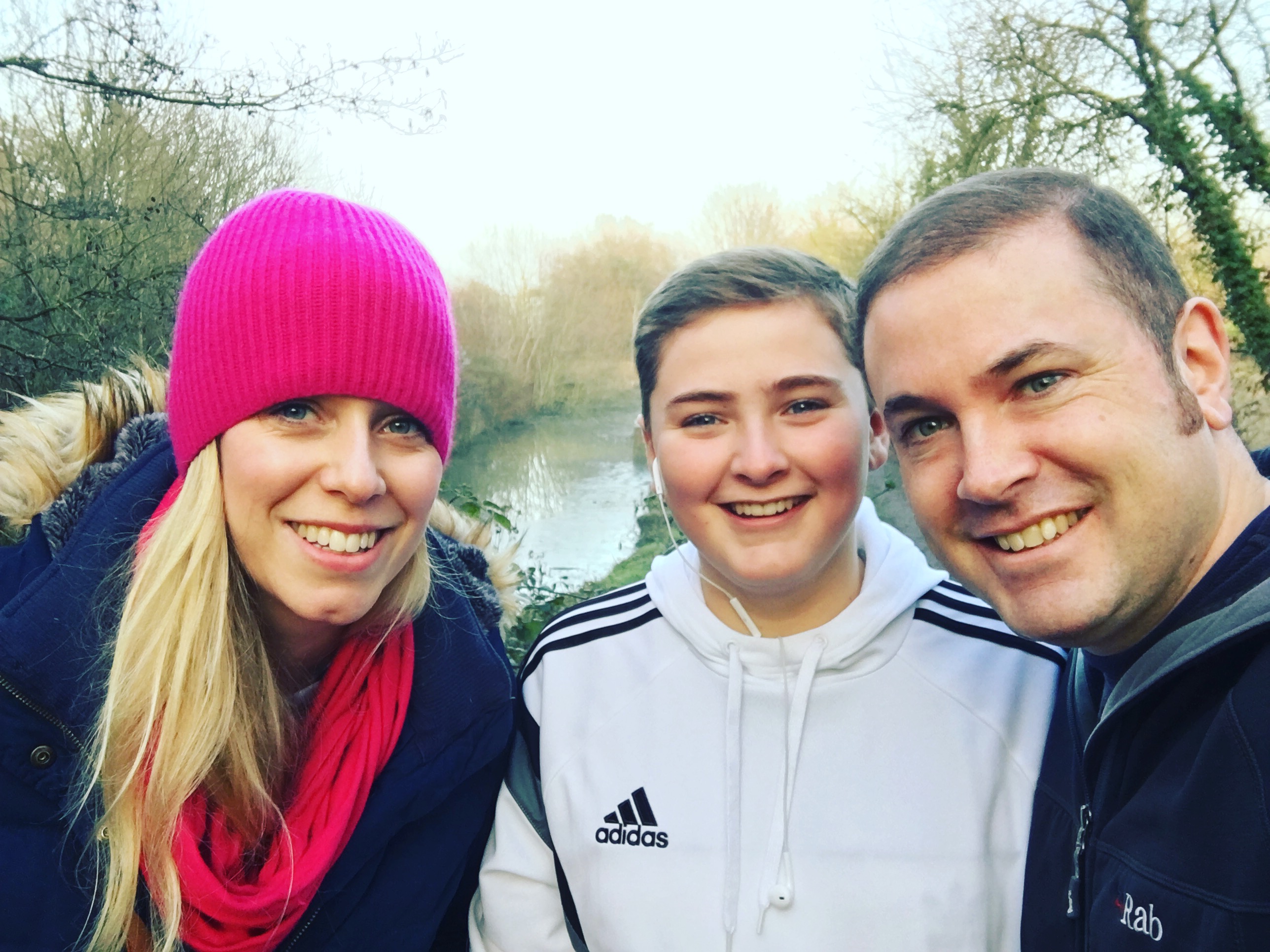 It’s easy to work myself up thinking about my tumour and sometimes I worry that it’s growing. I tend to overthink every headache or mild symptom. However, I’m very grateful for the treatment that I’ve had and I hope that by sharing my story I raise awareness of the disease.

I’m looking forward to the next chapter of my life and I can’t wait to meet our son. Life is going well and I feel very lucky to have survived my brain tumour diagnosis. 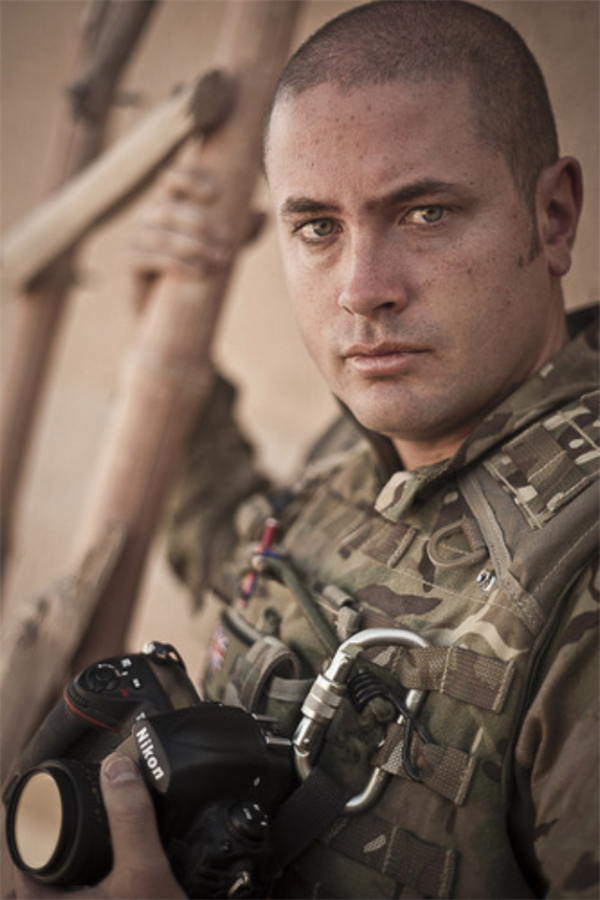