Shannon was diagnosed with a rare craniopharyngioma brain tumour when she was just nine-years-old. She underwent emergency surgery and has endured several operations over the years, plus treatment including radiotherapy and hormone replacement. Now 18, and a college student, she is certified blind and relies on a long cane to help her get about. She is looking forward to leaving home and studying at university.

Shannon was diagnosed with a brain tumour when she was nine. She had started complaining of headaches and I took her to the optician. We were told that her left eye wasn’t focusing properly and were referred to our GP. She underwent checks for things like diabetes and was then referred to an ophthalmologist. Fortunately, I had BUPA cover through work so we managed to get an appointment quite quickly. Shannon underwent specialist diagnostic testing but we were told the results weren’t clear. Then she had an MRI scan.

As soon as the hospital had the results I had a phone call and we were asked to go to the Radcliffe Infirmary in Oxford that night. I really didn’t understand what was going on, you just don’t suspect it will be anything as terrifying as a brain tumour. We had a history of eye problems in the family so I was convinced it would be something like that.

Looking back, there were signs which might have indicated what was to come. Shannon had increasing problems reading and was relying on a magnifying glass but she was very good at hiding how bad things had become.

We were allowed home for the weekend and then went straight back into hospital to be told by a surgeon that Shannon had a craniopharyngioma tumour putting pressure on her optic nerve. She was taken into surgery in September 2005 and due to complications involving a bleed needed a follow-up operation too.

The tumour couldn’t be removed, it was in the centre of her brain but they were able to remove a cyst which had been caused by the tumour and insert a reservoir to enable them to drain fluid when it built up

As a result of the operation, Shannon had temporary paralysis on her left hand side but, in time, this got better. We were allowed home after a fortnight and, every day after school for six weeks, we travelled from our home in Aylesbury to Oxford so Shannon could have radiotherapy. Because the tumour was near the pituitary gland, Shannon also had to have treatment to replace her hormones and to help ensure she continued to grow properly.

Things returned to nearly normal for a while until a routine optician’s appointment in 2007 when a sight change in Shannon’s right eye gave cause for concern. We were straight back into hospital and Shannon underwent another procedure to remove a further cyst which had been caused by the tumour. There was some impairment to her eyesight, but Shannon managed to get used to things. She has always been someone who can cope and just seems to be able to get on with things.

Two years later, in 2009, the headaches were back. We had been on holiday to Devon and Shannon had a scan as soon as we got back. This was followed almost immediately by a craniotomy to aspirate the cyst and insert another reservoir. Following that we were able to get on with our lives and everything was fine until February last year (2014) when Shannon complained of a bad headache. She has learnt to distinguish between an “everyday” headache and one that we need to worry about. She phoned me from college and I took her back to the John Radcliffe. Doctors recommended a scan and then an MRI as she hadn’t had one for four years. The results came through very quickly and I had another phone call. Looking back I wonder now if the doctors suspected another serious problem but didn’t want to tell us until they were completely sure.

Again Shannon underwent a craniotomy and, this time, we were warned that she could be left with damage to her limb function. In the past, Shannon had been taken for surgery immediately. This time we waited around six weeks. It was a dreadful time because, unusually, there was time to think about the ‘what ifs...’ On previous occasions we had just gone into survival mode, there had been no time to think about anything apart from just getting on with what needed to be done.

There was also a complication this time because Shannon was 17 and deemed too old for the paediatric high dependency unit. We were told the operation might be postponed if there was nowhere for her to be cared for immediately post-op. Fortunately a bed was found in the neurological intensive care unit at the John Radcliffe. The operation went ahead but, this time, Shannon unfortunately lost the sight in her right eye. We owe a great debt to neurosurgeon Jay Jayamohan and hold him in very high regard for all he has done for us over the years.

The brain tumour and treatment she has been through means she has been left with no vision in her right eye and very limited “letter box” vision in her left eye. Despite being certified blind, Shannon has managed not to let it affect how she goes about doing things. She does need a long cane now and has had some training with this to ensure she can get about safely.

Understandably, Shannon is particularly cautious when she goes somewhere new and isn’t confident enough to be on her own. A former pupil at Cottesloe School in Wing, she is now studying music technology at Amersham and Wycombe College. She is hoping to study audio production at university. It is a subject which she loves and is really good at. Perhaps her hearing has developed in compensation for the loss of her sight.

Because of the brain tumour, Shannon has had to grow up quickly. She just gets on with her life and refuses to let things deter her. To her credit she always sees the best in everybody, is great company and has a lovely giggle. From time to time she will get upset if she knocks something over and say: ‘But mum, I just didn’t see it.’ There are no words to describe how much I admire the way she deals with her situation. Nothing seems to get her down. 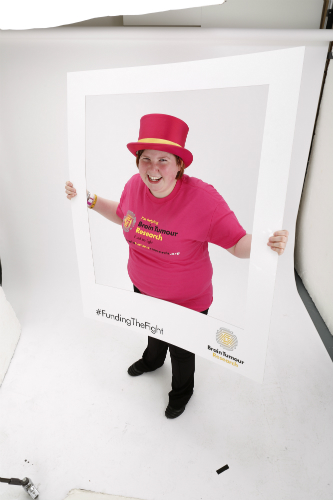