After experiencing months of crippling migraines, sports-mad Sam was diagnosed with a brain tumour at just 11 years old as he studied for his SATs exams. After undergoing complicated surgery to remove the tumour, Sam had to spend three months in a children’s hospital to recover. Now 24, Sam lives his life like anyone else his age and is thankful that the tumour hasn’t stopped him from playing football, swimming or going out with friends.

“The radiographer who had looked after me during the scan, had to tell my Mum that her son had a Brain Tumour, as well as Hydrocephalus, which meant I had fluid putting pressure on my head. She cried, came back out and tried to tell me as calmly as she could. Obviously being 11 at the time, I didn’t fully understand how big the situation was.”

It was January 2004 when I began to experience really bad migraines.  I was studying for my SATs exams at the time and had been cramming in lots of homework alongside going to football and hanging out with my friends. I think my mum thought that I was overdoing it for an 11-year-old and needed to take it easy, both academically and in my after-school activities.

I was a very sporty child, so telling me to ease up was definitely a hard thing to do. I loved swimming and playing football, taking any opportunity to get out of the house and run around with my mates. I developed a love for football and became a big Leicester City fan early on, buying a season ticket. My dad is a big fan too and being up in the stands with him and cheering on Leicester was always good fun and is still something I love to do now.

The migraines continued for several months. Mum took me to the doctors a few times, but

they just prescribed pain killers and told me to take a step back from the intensity of the sports I did. One night in May I got up in the middle of the night to go to the bathroom when I began to struggle with my balance and eyesight, walking straight into a wall. My mum woke up and was shocked and worried as soon as I made a noise. She knew something was wrong and that it wasn’t just me being a sleepy child, but that I was disorientated and she decided I needed to see a doctor the next day.

After taking one look at me the doctor referred me to the Royal Leicester Infirmary to see a specialist and undergo more tests. I remember that day in the hospital and having an MRI scan. It was a daunting experience and I was relieved to have my parents with me.

The radiographer who had looked after me during the scan, had to tell my Mum that her son had a Brain Tumour, as well as Hydrocephalus, which meant I had fluid putting pressure on my head. She cried, came back out and tried to tell me as calmly as she could. Obviously being 11 at the time, I didn’t fully understand how big the situation was.

My surgeon said the operations would be tricky as the tumour was located near my brain stem and there was a small chance important nerves could be damaged and affect my ability to walk. Not the words you want to hear as a small boy. During the first operation to remove the tumour the surgeon also performed an endoscopic third ventriculostomy (ETV) to relieve the pressure (hydrocephalus).  The operation took 10 hours.

Recovery was slow and uncomfortable. I was in the children’s ward for just over three months, which felt like a year. As it was now the summer holidays I was visited regularly by friends and family and my headteacher even came to see me.

Another visit to the hospital that summer was from Nottingham Forest FC, although I think I was the only child that wasn’t happy to see them. As a Leicester City fan, this was a day to forget! What made it worse was that photo was used in the programme for their next match at their Stadium.

While I was recovering at home I was rushed back to hospital as I felt unwell. After another CT scan I was told I had hydrocephalus, which meant I had fluid putting pressure on my brain and the ETV had not helped this. To fix this I had a brain shunt fitted to drain the fluid off, which involved having staples put in my head, I think this is the worst pain I have ever experienced.

I managed to recover enough to return to secondary school in September though I found school work a lot tougher than before. I had to take my time with everything and had to take breaks as re-learning information whilst taking on new information was challenging and tiring. I also didn’t have the same memory that I had before the tumour. I did my best though and got through my GCSEs with a bit of extra tuition and the support of my family.

Four years later, in 2008, I was taken into hospital again as the shunt wasn’t working as efficiently as it should and the pressure was building again. I had to have a new programmable shunt put in my head that was newly developed and I was one of the first to have this particular shunt. The dial on the shunt, which changed how quickly the fluid was being filtered, could be changed with Magnets so no Surgery would be needed again. This just mean that I can’t go through things like Airport Scanners. I have to have it re-programmed every time I have an MRI Scan, which is every 18 months.

Looking back on those years I am really thankful that I didn’t have to go through radiotherapy or chemotherapy. The statistics are shocking and having gone through the experience and realising how devastating it is, is why I chose to fundraise for Brain Tumour Research, to help fund research to help others.

Over the last three years my girlfriend, Sarah, my Dad, Mark, my Mum, Rachel and sister, Lauren and I have raised over £3,000 for the charity. We’ve organised charity football matches, quiz nights and my sister took part in a sky dive and my dad has taken part in marathons and more. We all had great fun doing all this and will carry on for sure! Sarah and I support each other really well as I have suffered from the Brain Tumour and Hydrocephalus and Sarah suffers from a chronic illness known as Endometriosis. We are in and out of hospital a lot, so we do all we can for each other.

Having the tumour has impacted on my life and I often get tired quickly and the vision in my left eye isn’t good. My memory isn’t as sharp as I would like and I can get frustrated when I can’t remember something. However, looking at the bigger picture my life is good. Sarah and I are moving in together soon and I feel fortunate that I can live the life of a normal 24-year- old. 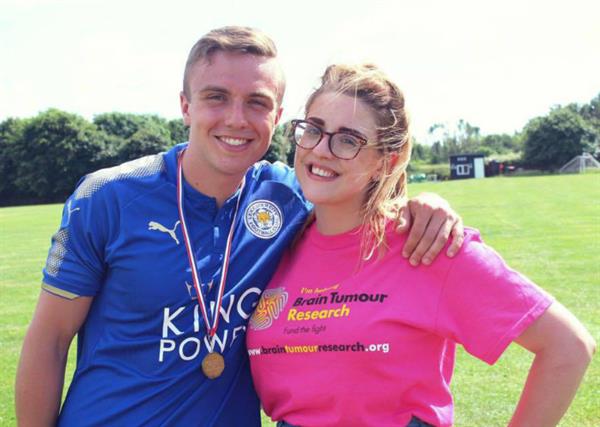