Richard Walker, from Kidderminster in Worcestershire, was told he had a glioblastoma multiforme (GBM) on his 51st birthday in December 2021. His symptoms began two months before, when he experienced severe headaches that lasted for days at a time. After thinking he was having a stroke, tests revealed the devastating news that Richard had an inoperable brain tumour. As he is undergoing radiotherapy and chemotherapy treatment, Richard wants to share his story to help others who are living with their own diagnosis.

Receiving a life-limiting diagnosis has brought me closer to my wife, Lucy and two children, Evie and Max and helped me prioritise what’s important. I certainly don’t feel the way I’ve been led to believe I would feel, living with a brain tumour.

My symptoms started around the end of September 2021, two months before I received my diagnosis. I felt like I had been hit around the back of my head with a rolling pin and my headache lasted for three days. I’d never felt pain like it and wondered if I might have hit my head and not remembered. I took some painkillers and it helped manage the pain.

A week before Christmas, I woke up and felt dizzy like I had been ‘on the pop’ the night before (which I hadn’t). A bit of food and fizzy drink helped me feel a bit better and I went out in the van to see customers. I’ve worked in the welding industry for 30 years and in 2017 I decided to set up my own company, Weldmax UK Ltd in Stourport-on-Severn and I love my work.

An hour later I could see red and green lights in the corner of my right eye which came and went. I remember about five years ago a friend who had a stroke described something similar so I thought that might be happening to me. The words on my paperwork appeared joined up and I had the dizzy feeling I’d experienced earlier that day but this time felt like I may faint.

I was with a customer loading the van and they even commented to ask if I was okay so I must have looked grey.

While driving in my van, I lost peripheral vision in my right eye and I slowed right down, looking for a safe place to pull over. I felt like I was going to pass out at the wheel.

I called Lucy and asked her to come and get me and when I eventually found somewhere to stop, I saw a couple walking to their house and as they got to their front door, I asked them for a cup of tea – I don’t even drink tea. They called their neighbour for help. She was a nurse and when she took my blood pressure, it was through the roof. To avoid the four-hour wait for an ambulance, when Lucy turned up we went straight to Alexandra Hospital in Redditch. 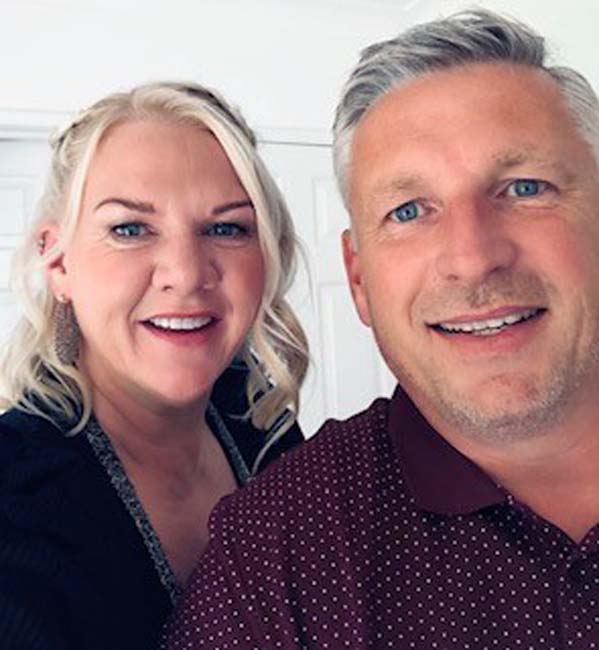 I felt delirious as my eyes were rolling to the back of my head. I was fighting not to pass out and I couldn’t get my words out. I wasn’t sure if it was a stroke or heart attack at this point but I wasn’t having any chest pain. Everything was a blur.

I woke up in a side room at the hospital and after a CT and MRI scan, I was told I had a lesion on my brain. I asked if it was cancer and they said: ‘yes, it looks like it but we need to do more tests.’ Over the next four days I had three more CT scans and two MRIs to assess the tumour.

I was transferred to the neurological unit at University Hospital Coventry and Warwickshire (UHCW) for a biopsy and felt frustrated because no-one could give me an answer to what the tumour was and what my options were for treatment. I’m a logical person; I like to know how to deal with things and want to face them head on – give me a problem and I’ll find a solution. I was frustrated because I wasn’t given the problem. 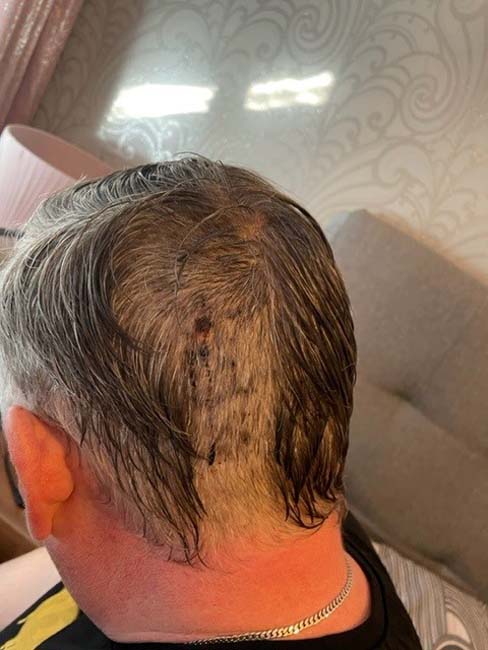 Finally, I was allowed home on Christmas Eve. My vision was still compromised in one eye and on New Year’s Eve, which was my 51st birthday and 9th wedding anniversary, I was told I had an inoperable grade 4 glioblastoma multiforme (GBM).

Because I had been on a neurological ward and spoken to other patients, I felt like something was different with my diagnosis, I sort of already knew that my tumour was aggressive.

My tumour was the size of a satsuma and attached like a millipede to my optic nerve. 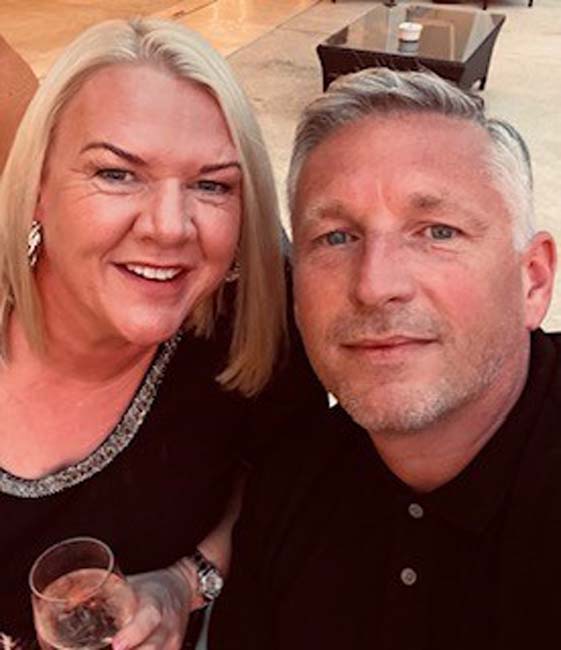 Lucy was the one who took the call from the hospital when they told me I had a brain tumour and she’s been incredible throughout. Together we have told the kids over time. Max is eight and his school has been very supportive. We bought him a book which is called ‘someone I love has cancer’ and that’s been a great tool to help him understand what’s happening to me. Evie is 16 and wants to be a doctor and has a nurturing personality and just wants to help me. 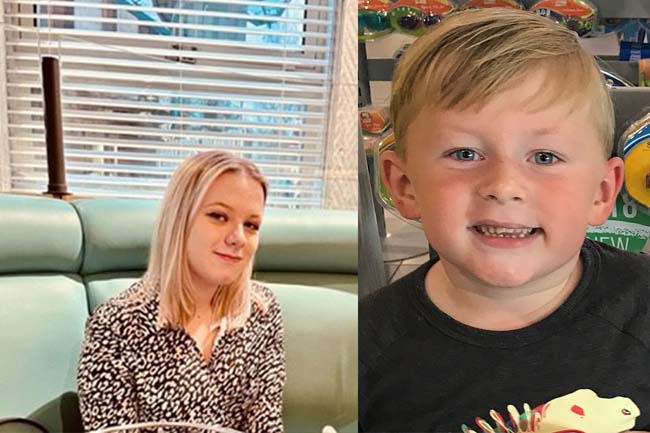 So far, I’ve had five out of six weeks of radiotherapy and a month of chemotherapy which has left me looking swollen. I’ll be on chemotherapy for the remainder of 2022.

I’ve felt, sad, angry and frustrated, especially as I can no longer drive. Reading the statistics about brain tumours is the fuel to my fight. I feel so lucky when I wake up in the morning. I decided to document my brain tumour journey on social media as a way of offloading my thoughts and as a place for people to see for themselves.

Lots of people ask how I am and this was an easy way of answering.

When my sister-in-law, Louise, told me that she was going to take part in Wear A Hat Day this year, I had never considered fundraising before but I am now getting fully involved and plan to visit all four branches of the bank that she looks after and help raise awareness on the day, as well as collect as many donations as I can.

As I come to the end of my radiotherapy treatment, I am more content and find I am still living and not letting my diagnosis dictate my life. 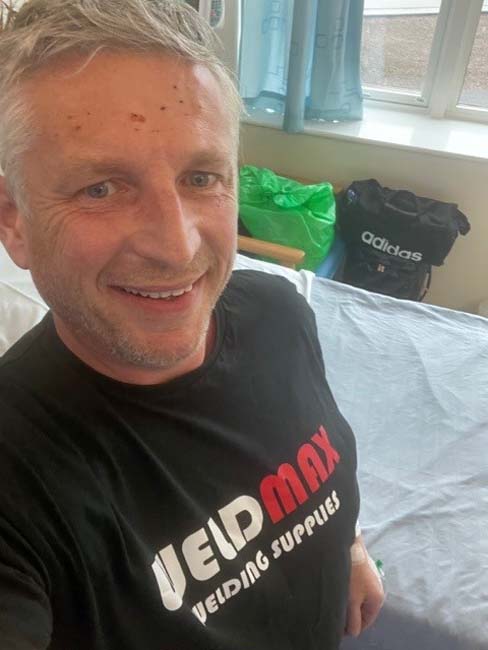