Former Royal Marine Commando Lance Corporal (LCpl) Rian Ilett, from Portsmouth in Hampshire, was diagnosed with a brain tumour after he was caught in an explosion while on operations in the Middle East in February 2019. An MRI scan identified the tumour and a biopsy later revealed it was a grade 4 glioblastoma multiforme (GBM), carrying with it a stark prognosis of just 12 to 15 months. The veteran underwent surgery to debulk the tumour, followed by intensive radiotherapy and chemotherapy. He finished treatment in December 2019 and his scans have remained stable ever since. Now nearly three years post-diagnosis, Rian, a 33-year-old dad-of-two, has written and self-published a book about his experiences. His hope is that ‘Every Day Is A Battle: Fighting demons, Jihadis and terminal cancer’ will inspire and motivate others suffering with physical and mental health problems caused by a life-changing diagnosis.

I had a fantastic 15-year career in the armed forces. After the brutal commando course, which saw me doing everything from dangling off high ropes to submerging myself in ice cold water, I discovered that by altering my mindset, I could push my body beyond what I thought it was capable of. Upon passing out as an elite commando, I was proud to don the coveted green beret of the Royal Marines. My military service saw me deploy regularly to conflicts in Iraq and Afghanistan and I have spent time in numerous other countries on various courses, operations and exercises. I have witnessed unimaginable horrors, including the severe injuries and even death of colleagues, who I considered my brothers.

“I forged unbreakable bonds with my comrades and together we saved countless civilian lives.”

In January 2019, I was on operations in the Middle East, when I got hit with an anti-tank missile that ISIS had got hold of. I suffered a few injuries, including concussion and ringing in my ears, so I was flown home for tests at the Royal Centre for Defence Medicine (RCDM) at Queen Elizabeth Hospital Birmingham. The tests didn’t reveal anything of concern and, keen to get back to work, I persuaded my chain of command to allow me to return to the Middle East to resume my duties. In any case, I was due to be back in the UK the following month for some R&R, so I agreed to go back to Birmingham for an MRI scan during my break. 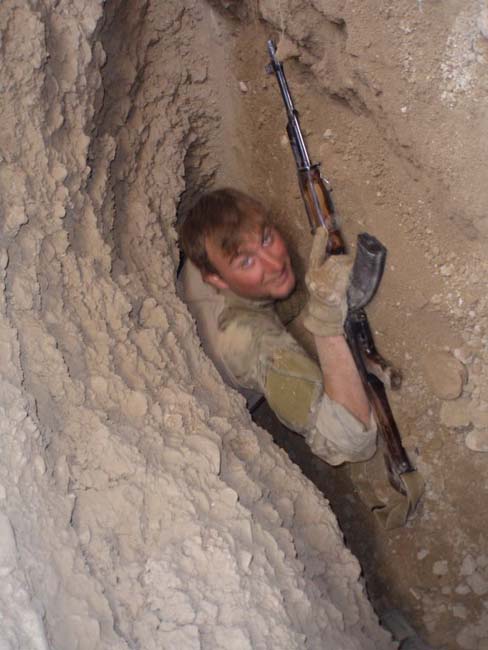 “True to my word, I went into hospital for my scan in February 2019 and that’s when doctors discovered I had a mass in my front right temporal lobe.”

When they told me they’d found something, at first, I thought it must have been connected to the incident the previous month. I had a combination of military and NHS consultants. The military doctors tended to be more forthright and one of them sat me down and said it was a tumour and that it looked like cancer. 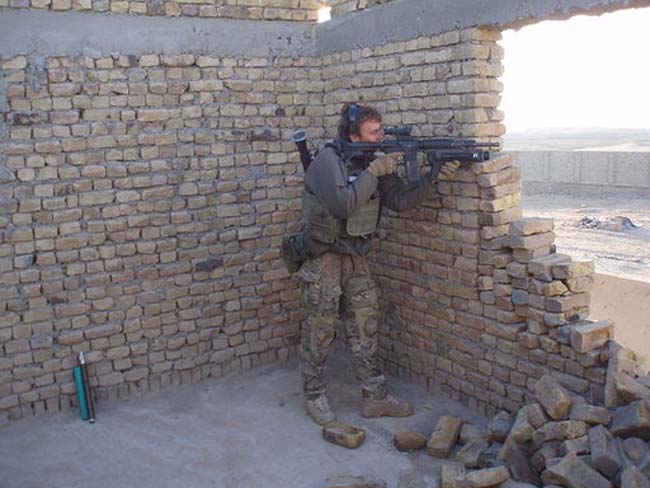 Three weeks later, on 20 March 2019, I had a craniotomy to debulk the tumour. I approached it with a positive attitude. Things don’t really tend to bother me in any case. My mentality was: ‘let’s just get this done’. Thankfully, the operation, carried out by the brilliant Dr Ismail Ughratdar (or ‘Dr Ish’, as he likes to be called), was successful and I didn’t experience any complications. The biopsy results following surgery revealed I had a glioblastoma multiforme (GBM) and I was given 12 to 15 months to live. Despite this terrible blow, I didn’t let it get me down. What choice did I have but to just get on with it? The next step was six weeks of daily radiotherapy and concurrent chemotherapy temozolomide (TMZ). I was also put on a clinical trial as well, which involved having intravenous chemo but that soon stopped, as it was impacting my eyesight. It got to the stage where I couldn’t watch the TV without wearing sunglasses. I continued on the oral chemotherapy, finishing my last cycle in December 2019. 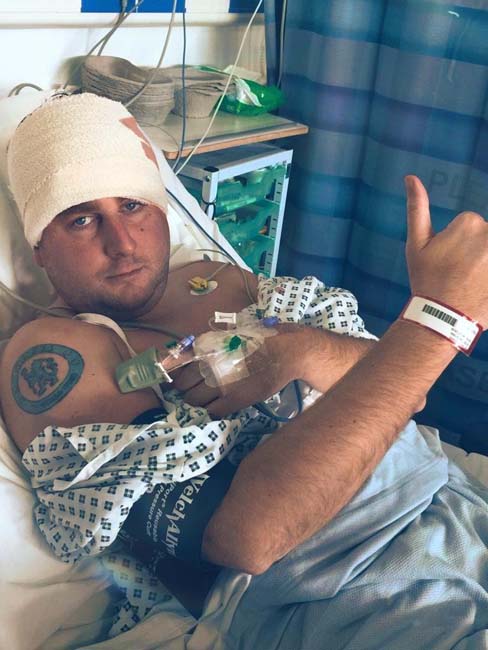 The Marines were willing to give me two years’ sick leave but even before my chemo finished, I wanted to go back. Obviously, I was no longer able to deploy overseas, so I was tasked with organising pre-deployment packages for colleagues who were going on tour. It was very frustrating not being able to deploy myself. I was usually the first man to volunteer. 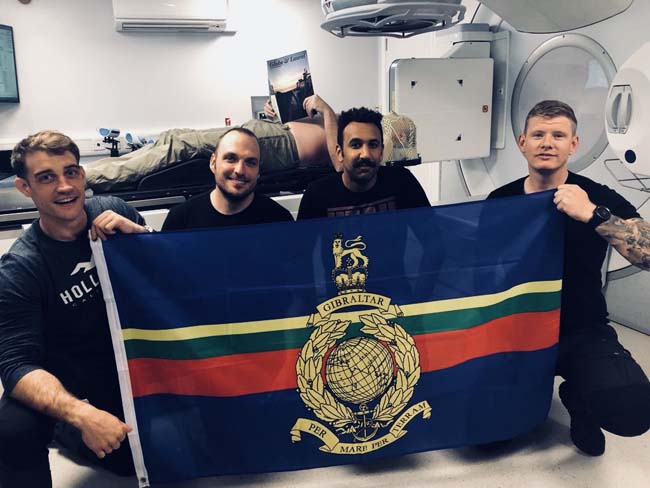 “I lost my hair during radiotherapy but luckily, didn’t suffer too many other side effects.”

Doctors told me not to go to the gym while I was on chemo but I was defiant and continued working out throughout my treatment, hitting the gym every day. I really believe that it helped me to cope with it. During my last cycle of chemo, I even managed to take part in a race up the highest peak in south Wales, Pen y Fan, beating quite a few of my peers, who were in good health.

In March 2020, when the coronavirus pandemic hit the UK, I was told not to go into work but to stay at home instead. That’s when I started putting pen to paper. Having never even read a book before, I embarked upon writing a memoir. The idea came from people close to me, who encouraged me to write about my many and varied experiences. It was frustrating at times, trying to remember the details of certain events but overall, I really enjoyed the process. Sometimes I’d phone people to chat about a particular period and that would help to jog my memory. It was a good opportunity to catch up with people I hadn’t spoken to for a long time. Around 21 months after I first started writing, in December 2021, my book, ‘Every Day Is A Battle: Fighting demons, Jihadis and terminal cancer’, was released on Amazon. 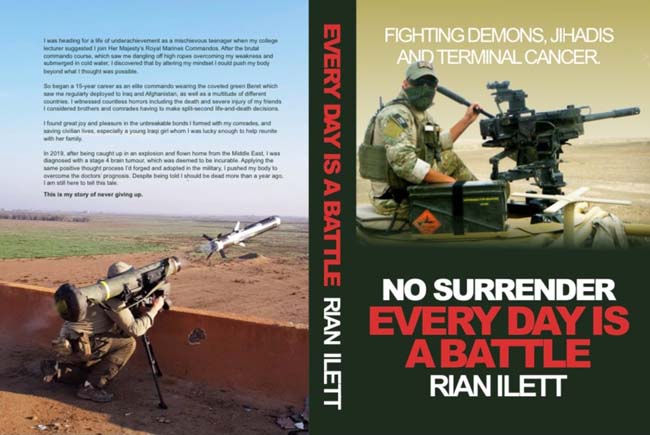 The feedback I’ve received has been unreal. People have read it and then reached out on social media, telling me how much they enjoyed the book, how they laughed and cried and how they feel inspired. The subject matter is very military-heavy but it’s also an account of how I’ve dealt with difficult situations both as a Marine and in my fight against cancer. I’ve laid everything bare in the hope that it will help others. I saw too many people in the cancer treatment centre, who seemed to have given up on life. My main message is that even when the odds are stacked against you, a positive mindset goes a long way. I was medically discharged from the Marines in December 2021 but my fight is far from over. The book is my story of never giving up. Despite being told I should have been dead more than a year ago, I am still here to tell this tale. 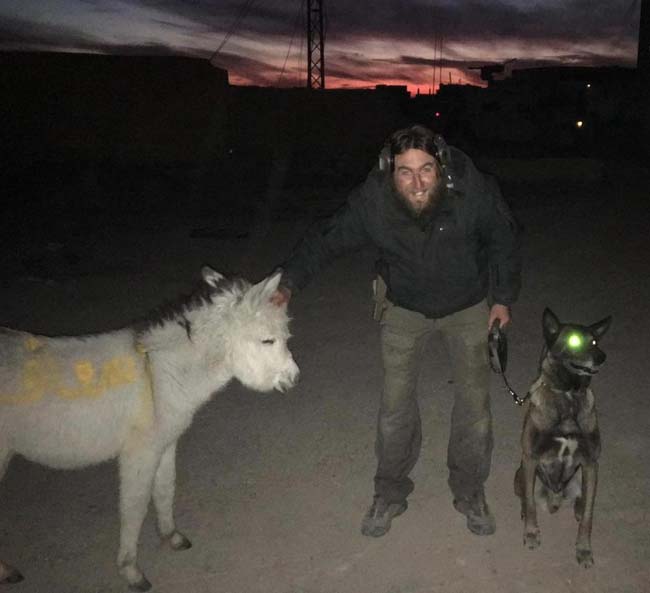 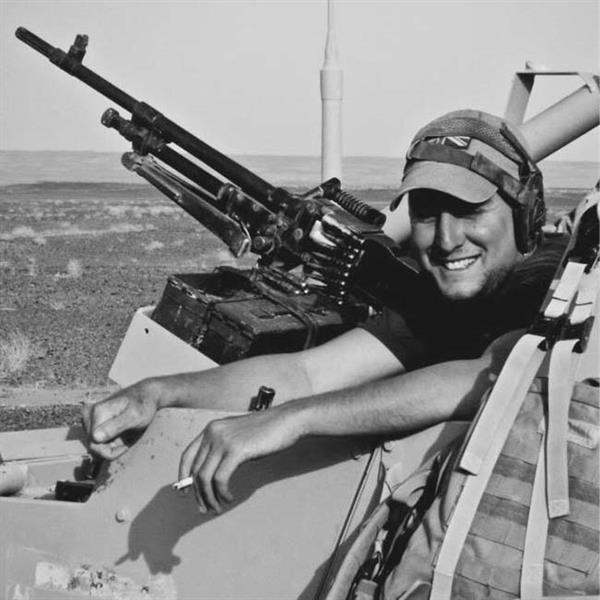