Poppy’s brain tumour was overlooked on no less than 22 medical appointments. Eventually diagnosed after an MRI scan, she was rushed in for emergency surgery at the age of ten. She missed Wear A Hat Day last year as she was too poorly, this year she is determined to join in with her class mates and wants others to take part in order to raise awareness and much-needed funds for research into the disease.

“Despite the agonising amount of time it took to get a diagnosis, we are thankful that Poppy’s tumour was not cancerous and that she didn’t need any follow-up treatment. After everything she has been through, Poppy is now happy and well. Play therapy has helped her come to terms with her experience as the shock and trauma of the diagnosis and surgery caused her to have nightmares. Physiotherapy has also meant she has been able to get back to dancing which she loves so much. In fact, just eight months after the operation, Poppy won a solo dance competition. I am so, so proud of her – we all are.”

Poppy’s story is told by her mum, Karen Eden:

We were happy living a normal and busy family life when, at the age of seven, Poppy started to suffer from headaches. She loved to dance and her classes and competitions kept us busy along with her brother Alfie’s activities.

Initially we were told that Poppy’s headaches were caused by nasal congestion. She was also being sick on and off and we started on what seemed a never-ending schedule of appointments at the doctor’s or hospital. Between 2013 and January 2016 we saw, or spoke to, a medical professional no less than 22 times. Throughout it all I felt that no-one was listening and I was at the end of my tether. The awful thought that Poppy might have a brain tumour crossed my mind, of course I didn’t want to go down that road and we were told that it was unlikely anyway because symptoms come on really quickly. I now know of course that this is far from the case.

In February 2016, Poppy had broken up for half term and began waking up in the night holding her head in pain. It was so bad she wouldn’t lie down again. The following morning we took her to A&E at Medway Hospital where, for the first time, alarm bells started to ring. Clearly the doctor was immediately concerned as we were taken straight up to the children’s ward while an MRI scan was organised.

The results came back quickly. It was the scenario which any parent dreads and I knew something bad was about to happen as we were ushered into a quiet room. The scan had shown a mass on Poppy’s brain and, within hours, we were transferred to King’s College Hospital in London.

After three years of missed opportunities to get to the bottom of what was causing Poppy’s pain, she was taken in for emergency surgery. It is hard to describe just how traumatic this was for us all. I find it really upsetting to think about how different things might have been had we been able to discuss the diagnosis and what needed to happen in a more controlled way, without the panic or extremely anxiety we all went through. Can you imagine how terrifying it was for a child of ten?

I feel terribly let down that there were so many missed opportunities when Poppy could have been diagnosed earlier. Sometimes I think ‘if only we had taken her to A&E sooner’ but you rely on the doctors’ expertise and put your trust in them.

Poppy had been a trooper throughout those months and years before she was diagnosed. She must have been in such extreme pain yet she carried on for so long, had very little time off school, continuing with her dancing and was even in a panto just weeks earlier.

It got to the stage where members of our family were noticing that Poppy was withdrawing. In the weeks immediately before the MRI she would be sick almost every morning after she got up and would hold her head in her hands.

Poppy’s surgery took place on 19th February 2016, the day after we took her to A&E. The operation took ten long hours. Around 60% of the tumour was removed. It was a pilocytic astrocytoma growing from her brain stem. The tumour was low-grade and usually has a good prognosis.

Thankfully, Poppy recovered quickly from the operation. To start with she was on morphine to control her pain but bounced back, the way children do, and was out of bed the following day. Within a week, we were able to take her home to Chatham in Kent.

Despite the agonising amount of time it took to get a diagnosis, we are thankful that Poppy’s tumour was not cancerous and that she didn’t need any follow-up treatment. Despite everything she has been through, Poppy is now happy and well. Play therapy has helped her come to terms with her experience as the shock and trauma of the diagnosis and surgery caused her to have nightmares. Physiotherapy has also meant she has been able to get back to dancing which she loves so much. In fact, just eight months after the operation, Poppy won a solo dance competition. I am so, so proud of her – we all are.

Poppy’s side effects have been mostly emotional. Things could have been so different and we are fortunate that her tumour was not cancerous and that she came out of the operation with only a very minor weakness on one side and not needing radiotherapy or chemotherapy which I know can cause life-long deficiencies.

While we do have to go through the anxiety of going for regular scans and the agonising wait for the results, a stable MRI is a step forward. There is no doubt that we have been very fortunate and we know that many children are not so lucky. It is impossible to understand that brain tumours, which kill more children and adults under the age of 40 than any other cancer, have been allocated just 1% of the national spend on cancer research.

Poppy wants to share her story in the hope of helping other people. A year ago, she was recovering from surgery. This year, on Friday 31st March, she will be taking part in Wear A Hat Day along with classmates and teachers at All Saints Church of England School and with her fellow dancers at Chatham dance school Dance Alley. The money raised will fund research at four Brain Tumour Research Centres of Excellence where scientists are focused on improving treatments for patients and, ultimately, finding a cure for brain tumours. 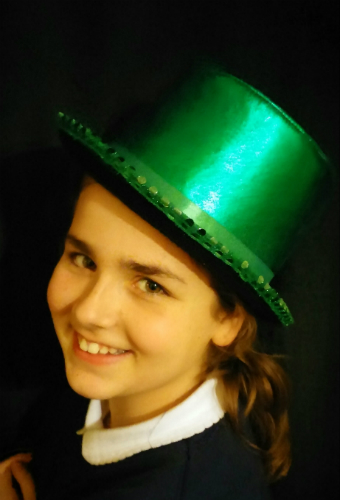