Digital product owner Nayfil Hussein, from West London, has suffered from bad headaches since her teens. The 32-year-old, who grew up in Luton, Bedfordshire, always thought they were related to her menstrual cycle. It was only after Nayfil became very unwell during a trip to Greece in 2019 that she knew something much more serious was wrong. Eventually, she was diagnosed with a medulloblastoma tumour, which has been treated with gruelling surgery, radiotherapy and chemotherapy. After experiencing punishing side effects from her treatment regime, Nayfil is finally feeling stronger and healthier and is now planning to do a charity walk to raise money for Brain Tumour Research.

I’ve had bad headaches since I was a teenager. I’ve always thought they were hormonal and related to my monthly cycle and I would take painkillers to manage them. Sometimes, the headaches were more like migraines; really painful and lasting for days. I wear glasses, so I also thought they may have been related to an issue with my prescription but I never imagined they would turn out to be a symptom of a brain tumour.

I used to live in Luton and I would commute into London every day on the train. One day, in May 2019, I experienced some weird sensations during my commute. I was getting sharp pains in my brain and spine. The best way I can describe it is that it felt as if my brain was on fire. I walked the 15 minutes from Farringdon station to my office in Chancery Lane and when I arrived, I still felt awful and had to leave after just five minutes. This happened a number of times for a period of about two weeks.

“Later that month, I was on a flight to Greece with my husband Paul and his family, when I became unwell. I got a headache, which got increasingly worse and the pain was eventually unbearable.”

When we arrived in the resort, I felt no better and had to stay in bed for most of the holiday. It was different to my regular headaches and lasted eight days. I took various painkillers to try to manage it, to no avail. In desperation, I called my GP from the villa and was advised to ‘ride it out’. As well as the headaches, I would throw up every morning. It felt as though my head was too heavy to hold up and my vision was affected too. I had a terrible time and was becoming increasingly concerned about what was wrong with me.

Once we got back to the UK, I felt better for five days or so, before things began deteriorating again. The pain came back with full force and I was stuck on the sofa, unable to get up. I tried to move my neck but I couldn’t and I knew I needed urgent medical attention. I mustered all the strength I had to walk the short distance across the road to Ealing Hospital. It took me 20 minutes to make the short journey on foot to the A&E department. When I arrived, I had to sit waiting for nearly five hours. When Paul finished work, he came to join me in the waiting room and eventually I was admitted, as I was completely immobilised by the pain. I had various scans, blood tests and a lumbar puncture but they were unable to find the cause of my symptoms.

I was discharged but the headache did not subside. A few days later, I was admitted back into Ealing Hospital and after further tests, another MRI scan revealed a suspected brain tumour, the size of a golf ball. I was relieved they’d found the cause but worried about the seriousness of the diagnosis. My case was then referred to Charing Cross Hospital in Hammersmith.

“Everything seemed to happen so quickly and I found it hard to believe what I was being told. It took me a while to accept that I had something in my brain that could potentially kill me.”

At the end of July 2019, I went in for brain surgery at Charing Cross. Before I was taken into theatre, I had to have some of my hair shaved off, which was really traumatic. My hair was my pride and joy – big and curly. I really loved it. Seeing it falling to the floor in chunks was really distressing and brought me to tears. Paul and my mum were there to support me, which was very much needed and appreciated. I am the eldest of five girls – who Mum brought up on her own after she separated from my dad. We are a close-knit family and it was really hard for Mum to accept what I was going through.

The 11-hour surgery was a success. My skilled surgeon removed the tumour, took a sample of the tissue for a biopsy and fitted me with a shunt, to drain the excess fluid in my brain. When I got the results from the histology, the tumour was confirmed to be a medulloblastoma. Medulloblastoma is the most common type of high-grade paediatric brain tumour, more common in boys than girls and rare in adults. The bad news was that it had also spread into my spine.

My recovery from surgery was awful. I was put on a high dose of morphine, which caused me to have nightmares. I had a sticky bandage on my head which got stuck to what remained of my hair and removing it was unbearably painful. When they eventually managed to take it off, I had to have more of my hair cut off.

After a month recovering from the operation, in September 2019 I began seven weeks of intense radiotherapy, which targeted the back of my head and spine. The treatment caused severe side effects, including seizures, during which I could still hear and see but my body would just freeze. It was so scary. Sometimes I ended up being admitted to hospital because of them. I also had horrible ulcers in my mouth, I lost my appetite and was unable to taste anything. As a result, I lost a lot of weight. I was 67kg when I received my diagnosis and at my lightest, I was just 44kg, making me clinically underweight.

“The nausea was constant and I was severely fatigued. I could only take a few steps at a time, as my energy levels were so low.”

I had another month’s break before starting vincristine and cisplatin chemotherapy on 3 December 2019. The chemo was administered intravenously and again, made me really ill. I was still recovering from the side effects of the radiotherapy but also dealing with similarly debilitating symptoms from the chemo, which included sickness, low energy and a sore mouth. 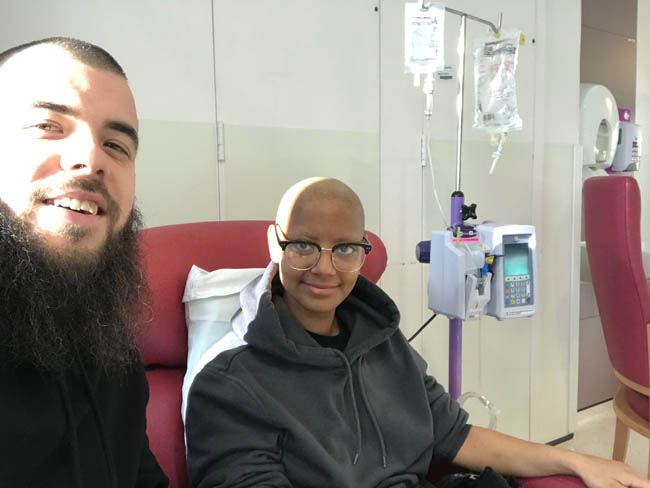 I had completed two out of seven rounds of chemotherapy when, in March 2020, the COVID-19 pandemic hit and my treatment was halted. This came as a blessing in disguise, as I was able to get some respite from the horrendous side effects. My oncologist was happy for me to stop the treatment altogether, as the results from my MRI scans showed that the radiotherapy had worked. It was a relief to finally be able to start recovering properly from the harsh treatment regime.

In many ways, I enjoyed the coronavirus lockdown, as it gave me a chance to rest and recuperate at home. I started painting and drawing and I read lots of books and watched movies. I got to relax, recover and heal. It was still a difficult and painful journey but gradually, I started to feel better and could eat more and move more. In September 2020, I got a call from my employer, Costa Coffee, where I work as a product owner for the app. They asked if I felt ready to go back to work on a phased return, which happily, I did. I continued working from home but by January 2021, I felt able to increase my hours to full-time, which marked a significant milestone in my recovery.

I now have four-monthly scans to monitor my condition and I continue to take anti-seizure medication. Every six months I have a full head and spine MRI scan as well. I have regular blood tests to check my hormone and white blood cells levels. I still speak to my oncologist regularly and he is happy with the way things are going.

“Although I do still have some side effects, I am healthy and happy and most importantly, I am still here and enjoying life with Paul and our dog, Bailey, a nine-year-old Staffordshire Bull Terrier.” 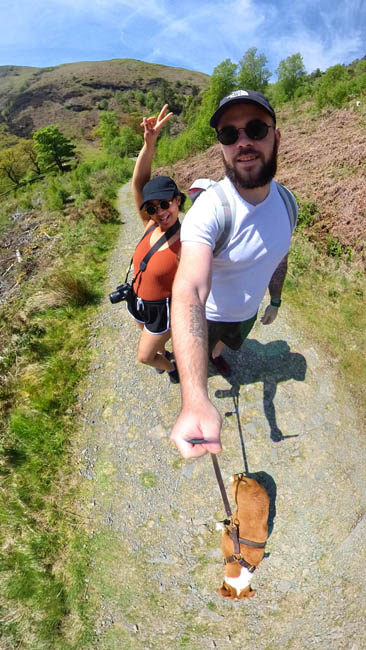 When I think about the future, I do worry that my tumour might come back and if it does, I fear that it will be terminal. I’ve always wanted to have kids but that is now out of the question due to the impact of the treatment I’ve had. I did, however, have my eggs frozen before my surgery, so surrogacy is potentially an option but this is something Paul and I would have to give a lot of thought to. My attitude now is to try to live life in the present. My experience has definitely altered my outlook. I used to be much more cautious and worry about what others might think but I’m now determined to live life for me and not to let anything get in the way. Once COVID is well and truly over, I’d love to travel the world with Paul. He is a free spirit anyway and would be thrilled to go on an adventure with me.

I’ve recently signed up to do a Walk of Hope to raise funds for Brain Tumour Research. As well as raising money, I want to help increase awareness of the disease and to give something back. Motivated by the fact that brain tumours kill more children and adults under the age of 40 than any other cancer, Paul and I are organising a five-hour circular walk around Hampstead Heath in North London, which will take place on Saturday 25 September. We’re hoping some friends will join us to make it a fun, group event. For me, it will be a real physical challenge. Before my diagnosis, I climbed Mount Snowdon but since finding out I had a brain tumour, I’ve lost a lot of fitness. I want to get back to being active and this walk will hopefully help me to get there and will mark another key milestone on my long road to recovery. 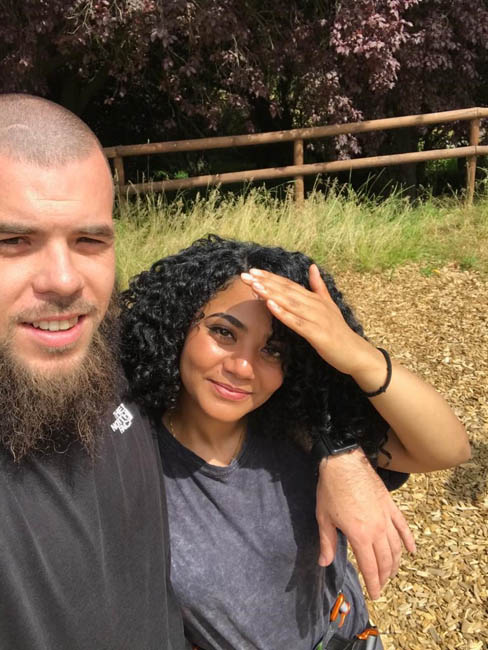