In February 2019, after months of suffering from mood swings, balance issues and severe headaches, 47-year-old north Londoner Nadège Presneau was diagnosed with a very rare type of brain tumour. Having spent her whole career researching and lecturing in the field of cancer genetics, it came as a huge shock to Nadège, when doctors discovered the cancerous, grade 2 tumour on her brain. The senior lecturer at University of Westminster, originally from Clermont Ferrand in France, underwent brain surgery to remove the tumour in March 2019. Following her craniotomy, she received radiotherapy, in order to try to reduce the risk of recurrence and spread.

I am now two months post-treatment and back at work full-time. I am recovering well and full of hope for the future. I am also, however, realistic about the possibility of the cancer returning. My tumour type is considered ‘higher grade’ and has a tendency to recur in more than 75% patients, as well as holding the possibility of metastasising elsewhere in the body. A great deal of uncertainty lies ahead.

I joined the School of Life Sciences at University of Westminster in May 2014, having previously been a researcher in mesenchymal (sarcoma) and bone neoplasms at University College London (UCL). At Westminster I principally teach Molecular Pathology and Cancer Genetics/Genomics at undergraduate and postgraduate level. I am also part of the ‘Cancer Research’ group in the school of Life Sciences.

Driven by the need for improving the lives of patients with cancer, I have dedicated my working life to experimental research and more recently, teaching and inspiring the next generation of cancer researchers.

“Hearing about patients’ experiences can serve as a powerful reminder of the reason and urgency for the work I do — but the experience of becoming a patient myself has changed my approach on a broader scale.”

I began feeling unwell in 2018. I was exhausted all the time but put it down to work pressures and stress. My dad had also passed away from cancer in August that year and so I thought I was still suffering from the effects of grief. When things didn’t improve, I went to see my GP and they carried out several medical investigations including a pelvic ultrasound and a thyroid function test. It transpired that my hormone levels were low and they found an endometrial nodule, or ‘polyp’. I was prescribed with thyroid hormone replacement tablets and referred for surgery. Things took a turn for the worse, however, on 23 September, I was at home alone when I passed out in my kitchen. It later transpired that I had suffered from my first seizure; unfortunately, it wouldn’t be my last.

“When I came around, I had a big bump on my head but no idea what had happened to me. It was really scary and I get emotional thinking about it now.”

My boyfriend Roger came over (he lives ten minutes from my house) and took me to my GP. I was tested for anaemia and was found to have low haemoglobin levels, so I was sent away with iron tablets. In November 2018 I went under general anaesthetic at University College Hospital London (UCLH) to have the endometrial polyp removed that the histology confirmed as being benign. The operation went well but afterwards, the symptoms I was suffering didn’t subside. I was also noticing other, more physical symptoms. For example, I had become really clumsy, falling off my bike and tripping over on the stairs and in the street. I was having frequent seizures and was feeling increasingly anxious and depressed. My whole personality had changed. By January 2019 things were so bad that I would often burst into tears at work. On one occasion that month, my colleagues advised me to go home and take two weeks off to seek professional help and try to get better.

The following month I was back at work when, on 22 February, I developed an excruciatingly painful headache while I was teaching. Ibuprofen wasn’t helping at all, so my colleague and friend Miriam took me to the A&E department at UCLH. It was there that a CT scan revealed a ‘suspicious mass’ on my brain. I was shocked to say the least. The next morning, I was transferred to the National Hospital for Neurology and Neurosurgery in Queen’s Square by ambulance. Still in utter disbelief, I sent WhatsApp messages to all my family and friends, to share the disturbing news. Gradually my friends started to come and visit and I realised that, if nothing else, I had some really great people around me.

I had initially been told that because of its location, the ‘mass’ was likely to be a low-grade meningioma. The craniotomy went ahead on Thursday 7 March 2019 and lasted around six hours. It went better than was expected, as Mr Kitchen was able to perform a total resection, completely removing all of the visible tumour. I needed several blood transfusions but otherwise recovered well and was discharged from hospital the following Monday. For my mum and my boyfriend, it was a particularly worrying and stressful time.

“My mum, who lives in Clermont Ferrand, travelled to London to be with me before I went in for my operation. At the age of 71, she travelled with my youngest sister, flying for the first time in her life.”

It meant so much to have her there. My good friend Mark, who I used to work with at UCL and University of Westminster, also went above and beyond to take care of me. I was comforted and reassured by the love and support being shown to me.

Having been though brain surgery and recovery under the impression that I had a low-grade meningioma, the pathology results, which I received during a routine appointment in May, told a different story. I was diagnosed with a haemangiopericytoma / solitary fibrous tumour (HPC-SFT) brain tumour. HPC-SFTs are categorised as a type of mesenchymal tumour that can appear anywhere throughout the body in soft tissue and bone.

"it is ironic that I have spent much of my career researching cancer and, in particular, soft tissue tumours. To my absolute horror, I, the researcher had become the patient.” 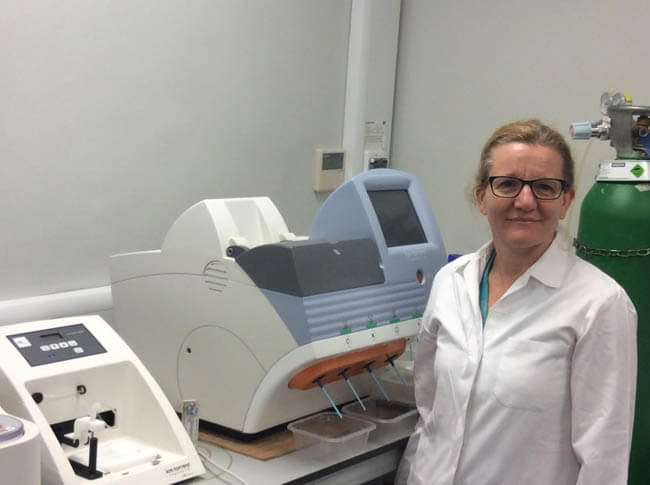 Ever the scientist, I asked lots of questions and read everything I could about the disease, to arm myself with knowledge. It was explained to me that HPC-SFTs account for less than 1% of tumours within the central nervous system (CNS). They are currently graded according to a three-tiered system, but some researchers consider there to be considerable overlap or signs of transition between the grades, leading them to believe that they are on a continuum rather than three distinct tumours. I was under the care of consultant neurosurgeon Mr Neil Kitchen, who would perform a resection in an attempt to reduce the size of the tumour as much as possible in a process known as ‘debulking’.

Throughout my treatment I have found that my professional background is a double-edged sword. On the one hand, it helps in that I know what questions to ask the clinicians but on the other hand, the more you understand, the scarier it can be. Following surgery, I was contacted by the oncology team and was given my molecular pathology report. My tumour, it transpired, was a ‘grade 2’ HPC-SFT, classified as a malignant tumour requiring radiotherapy in order to avoid recurrence and spread.  My consultant clinical oncologist, Dr Naomi Fersht, reiterated the rarity of my tumour type. A specialist in the management of primary and secondary brain and spinal tumours, she had only come across ten cases of HPC-SFT in her whole career.

“It was decided that my prognosis would be much better with radiotherapy and so at the beginning of October, I started a six-week course of high-energy radiation in order to treat the tumour bed and reduce the risk of recurrence. Although, happily, it was clear on my recent MRI scan that I had a successful total tumour resection.”

I coped well with the treatment and found it less frightening than I thought it was going to be. Since finishing radiotherapy in mid-November, I have been tired but was pleased to be feeling well enough to return to work at the beginning of December and am glad to be back full-time now and feeling more like my old self.

“I am seeking Cognitive Behavioural Therapy (CBT), to help me rationalise my thoughts, as I think about my tumour all the time. It is especially challenging, since I am surrounded by cancer in my work life, so it is difficult to get away from it.” 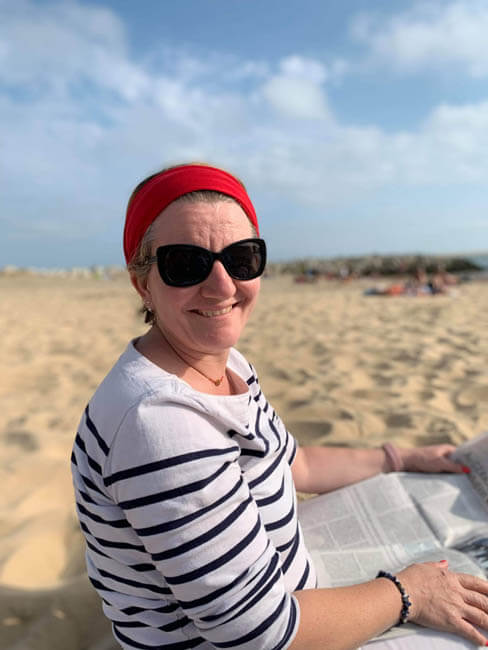 I haven’t adapted my lifestyle too drastically since being diagnosed with a brain tumour. I was already a fit and healthy person, so I am maintaining that and I have reinstated my main hobbies; cycling and kickboxing (I own a black belt!) I try to buy natural and organic products, wherever possible. I drink less alcohol now and I am eating less sugar but I am not tempted to go on a ketogenic diet, as it is too restrained for me.

I always knew that there was a lack of funding into brain tumours, compared to other cancers but now that I am patient, I am painfully aware of the need for change. I am joining Brain Tumour Research’s mission to find a cure by sharing my story to help raise awareness of the disease. On 27 March this year my colleagues and I will be joining thousands of other people across the UK, to take part in Wear a Hat Day. Together we will find a cure.

If you have been inspired by Nadège’s story and would like to know more about our lobbying, research updates and fundraising opportunities, please sign up to our weekly e-news. 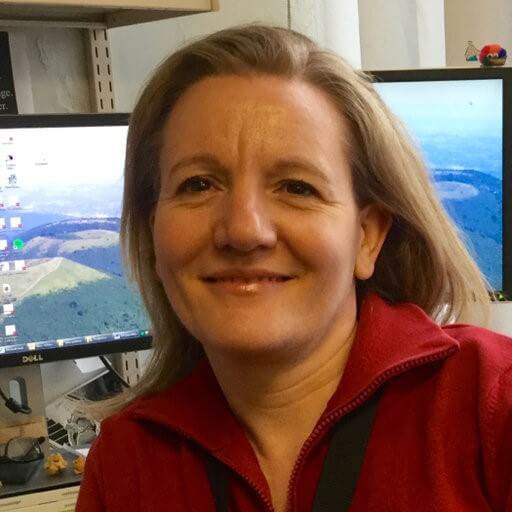