Myah Bell, from Gloucestershire, was ten-and-a-half months old when she fell ill. Initially diagnosed with a virus, she was rushed to hospital where a CT scan revealed a brain tumour. After undergoing treatment and surgery she is now in year 3 at primary school and thriving.

Here is Myah’s story, as told by Fay…

My partner Joe proposed to me on Valentine’s Day 2015. It was such an exciting time; our daughter Myah was nearly a year old and her older sister Freya was three.

Sadly, any thoughts about a wedding were swiftly put aside as the following day we were in hospital. Myah had been sick several times during the previous couple of weeks. Our GP suggested she had a virus but by mid-February we were becoming increasingly concerned. We went to Cirencester Hospital where we were given medication to treat dehydration and when we went back the following day, we were told to take her straight to Gloucestershire Royal Hospital in Gloucester.

Myah was still vomiting and couldn’t even keep water down. She had lots of tests and a CT scan which, to our horror, revealed she had a brain tumour.

“Myah had gone from having ‘a virus’ to being on the very edge of life and it was as though we had been caught up in a whirlwind.” 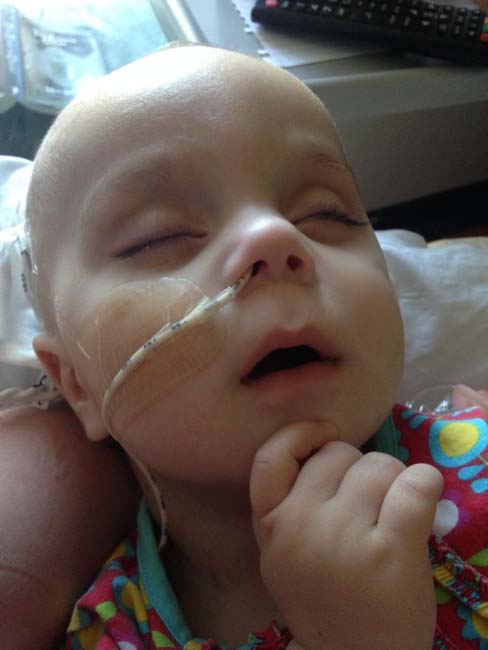 We were transferred once again, this time to Bristol Children’s Hospital. It seemed unbelievable that she could be critically ill yet we had noticed so few symptoms. Looking back at photographs we could see a slight swelling on her head but nothing obvious enough to cause us concern or noticeable enough to be picked up by health visitor checks.

Myah was just ten-and-a-half months old and the tumour had grown to the size of a tangerine – massive when compared to the overall size of her brain. We were struggling to take it all in as she was rushed into surgery to have a drain fitted to take away the fluid.

Myah was put on chemotherapy which was aimed at reducing blood flow to the numerous tiny vessels which were supplying the tumour. They were very difficult times as we didn’t know what was going to happen and we also had Freya to care for. We stayed in accommodation near the hospital and, every Thursday, Joe would go home and bring Freya from his mum’s to be with us for the weekend.

“I felt like we were in limbo. We had no idea what lay ahead, whether Myah would make it to the next stage.” 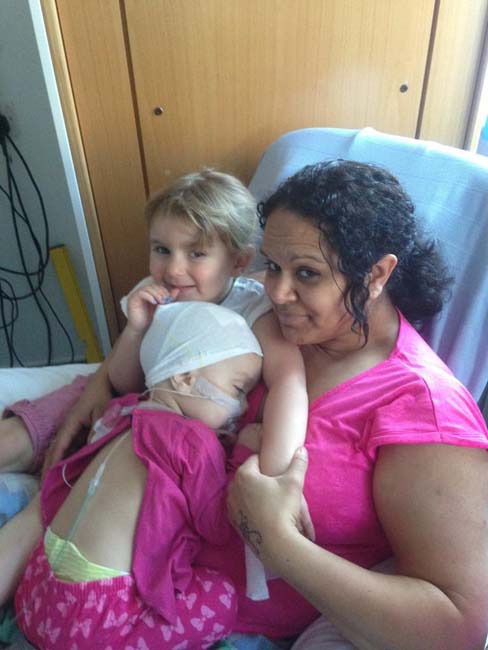 Despite how poorly she was, Myah, who was still breastfeeding, would break into a lovely smile when Freya came to visit. It is impossible to explain how terrifying it is to see your child have a seizure and, to some extent, I have blocked out the detail of what that was like.

It was April before Myah was able to have surgery. She was in theatre for 19 hours and very shortly after she was having another general anaesthetic so she could undergo an MRI scan. Every time she had a procedure we were warned of the risks; Myah could lose her sight, she might be permanently brain damaged, or she could die. Each time I prepared myself for the worst. For three months, we barely slept and wondered if the nightmare would ever end. 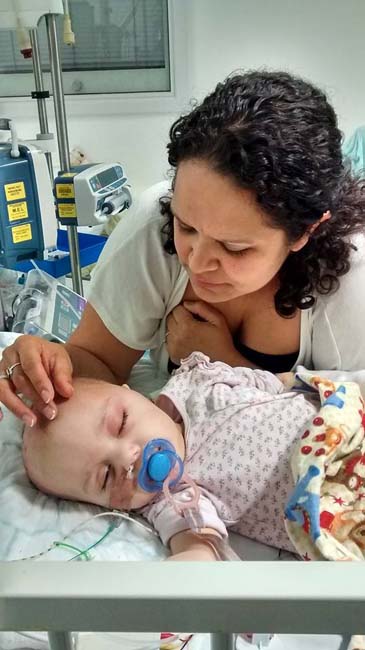 Fortunately, the surgery went well and the MRI revealed the tumour, which was a grade 2 choroid plexus papilloma (CPP), had been successfully removed. Myah underwent another four rounds of chemotherapy to ensure any remaining cancer cells were killed.

Myah now lives with a permanent shunt in her head which is essential to drain any excess fluid which continues to build up. She was back in surgery in March 2016 when the tube became blocked. We know there is a risk it may happen again but now know to look for the warning signs such as problems with speech and walking, sickness and dilated pupils.

We went back for regular scans, first of all every two months which then became less frequent with every result that came back clear. In July 2020 Myah was discharged from Bristol Children’s Hospital and will attend a yearly check-up to monitor her development. 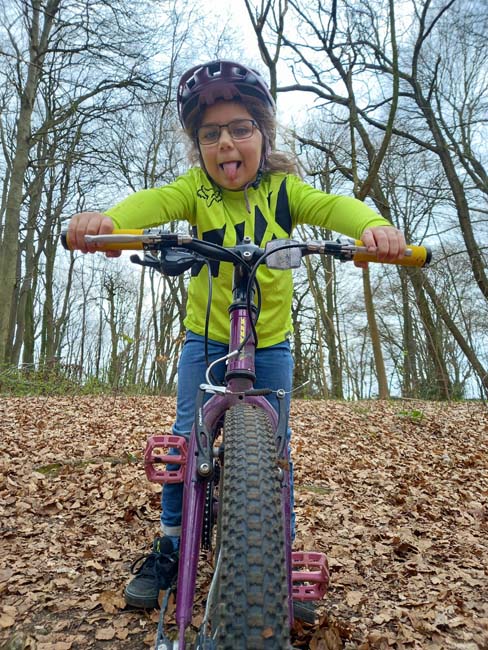 Aside from the shunt and problems with her peripheral vision, which should decrease with time, Myah started primary school and is now in year 3. Her memory is amazing and her ability to learn is on par with other children her own age. She loves riding her bike and being outdoors. Her big sister Freya is now 10 and although she becomes worried when someone in the house is sick, she and Freya have the odd sisterly fight which makes everything feel ‘normal’.

I think we will always live with the worry about what might happen if the tumour grows back but while Myah is a very special little girl because of all she has gone through, I don’t want her to think there are things which she can’t do as she continues to grow. 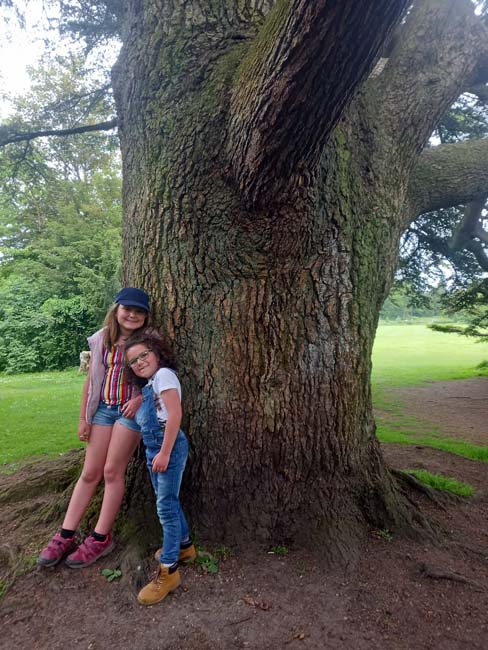 As a family we have fundraised for Brain Tumour Research every year since Myah’s diagnosis, whether that’s hosting our own event or taking part in Wear A Hat Day for which Myah was the face of the campaign when she was four. Freya is a great big sister and has recently hosted online ‘singing sessions’ which we have streamed on Facebook Live, encouraging donations from people tuning in. I’m incredibly proud of Freya for overcoming her fear of singing in public and growing in confidence. 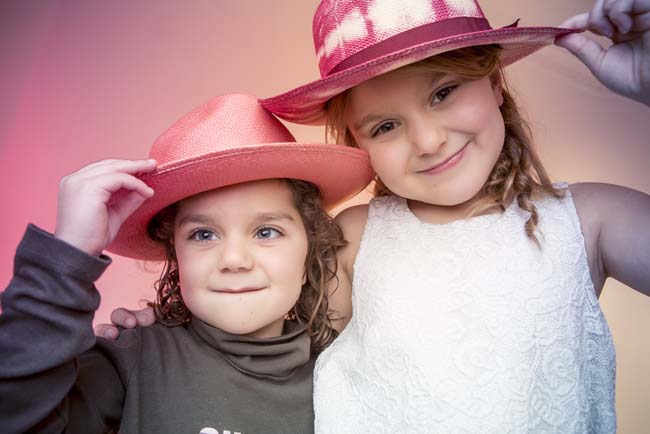 Myah’s grandmother, Karen, who the girls affectionately call ‘Nainai’ has been a huge support to our family and has been incredible at fundraising through her role at Cirencester Collage. She introduced wellbeing craft workshops to support her team during the COVID restrictions and has more than 40 people signed up to take part in her bauble making sessions, with each person making a donation to the charity.

As a family we’ve now raised more than £2,740, which represents the cost of a day of research, meaning means we can place a tile on the Wall of Hope at one of the charity’s Research Centre of Excellence. We feel very proud to continue to do our bit to help find a cure for this awful disease. 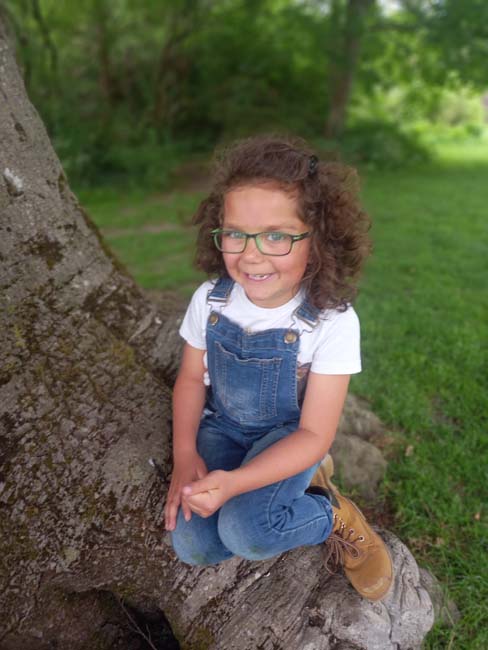