Meg was aged 19 and about to begin a new life at university when she was diagnosed with a malignant brain tumour.  She was operated on in Boston, USA, having been deemed inoperable in the UK and is now married and living life to the full.
Meg had a massive seizure in July 2004 and was admitted to A&E, having lost consciousness at work.  Looking back she did have symptoms earlier, like visual disturbances, which we put down to a possible migraine, and forgetfulness, which was so unlike Meg – she had always been so reliable, but not any more.  She had also inexplicably crashed her car.  We had put it down to mechanical failure for lack of any other explanation.

It transpired that Meg had also had a couple of other seizures while travelling abroad during her gap year, but hadn’t thought anything of it.

When I was given the news of Meg’s brain tumour it was obviously a great shock.  I am not normally speechless, but I opened my mouth and no words came out.  We had got the results straight away after her MRI scan when the radiologist just came out with “I am afraid she’s got a brain tumour”.

We were then to learn that Meg’s tumour was low-grade and because of its position in her brain her neurosurgeon was unwilling to operate and recommended a “watch and wait” approach, whilst sorting out the necessary medication to control her seizures.  This wasn’t a simple feat.  It took the best part of two years to find medication that suited her.  The first medication put Meg back in hospital as it caused toxicity.

Nevertheless, Meg started her degree course at Warwick University and her first year was one of trial and error, learning to live with her symptoms and establishing herself at Uni.  We did have some panicky phone calls when Meg had seen something on the web, or had taken too much or too little medication because of her difficulties with memory and when she felt very poorly we had gone to fetch her.  But we did have it easy.  Meg’s courage was quite humbling.  She never thought of herself, only about the impact that her tumour was having on those around her.

Meg lived with the knowledge of her tumour for 18 months.  In fact she didn’t really want her brain tumour to circumscribe her, just to concentrate on her life at university.

Meanwhile our local GP would question every decision that was made by the doctors at the hospital, like not wanting to operate until the tumour changed, nor even perform a biopsy.  He set us on a trajectory of questioning everything and stimulated a thirst in us for more knowledge.  I was known as “scary Mum” by the other doctors!

We were put in touch with an amazing man who kept a database of all the best brain tumour treatments in the world in his head – Rabbi Firer at the Ezra Le’marpeh Centre in Israel so we couriered him Meg’s scans.  Rabbi Firer gave us the names of two surgeons in the USA who he thought could help Meg.  Meg chose to see Professor Peter Black because he looked like and shared the same first name as my Peter, her stepfather!

We flew out to see Prof Black at the Brigham and Women’s Hospital, Boston, in January 2006 and he let us know he could operate.  I questioned whether he regularly performed such operations to which Peter Black replied that he did about three per week!  He was a lovely man and at the time I didn’t realise that he was in fact President of the World Congress of Neurosurgical Societies and is renowned as having developed the first intra-operative MRI to improve brain tumour treatment; one he was to use during Meg’s operation.  If I had known all that beforehand I wouldn’t have questioned his capabilities with such audacity!

Meg agreed to have the surgery as she was conscious that she could eventually die without it, plus the tumour was already having an impact on her eyesight.  It was suggested she could wait until she finished her degree, if she had scans every three months with the proviso that if there was any change she cancelled everything and got on the first plane to Boston.

At this stage we had such a mine of information which we wanted to share with other people who had been sent away with a “watch and wait” agenda.  Plus we needed to raise £35,000 for the surgery.

This was the impetus to set up Brainstrust.  Raising the money for Meg’s surgery proved to be easy.  Friends and acquaintances were so generous.  When we started raising funds to send other brain tumour patients for second opinions we questioned how you get people to donate to a general cause and also how we were going to target people who we didn’t even know, having exhausted our inner and outer circle of friends.
In November 2006 I was diagnosed with head and neck cancer and underwent surgery and radiotherapy.  It meant that I knew what it was like to be not only a carer, but also a patient (and I think it is harder being the carer).  The worse thing was having to tell Meg.  I knew I couldn’t keep it from her as that would destroy the trust we had.

I found myself also having to have three-monthly check-ups, so Meg and I tried initially to have them the same week, but this became very stressful, so then we spaced them out but that meant the gearing up for check-ups seemed to be taking all of our time.

Thankfully the surgery and radiotherapy did their job and I have been cancer-free now for over three years.

Meg returned to Boston for her operation in June 2007, having completed her finals.  Professor Black successfully removed her tumour using intra-operative MRI scanning.  She was back home two weeks after the surgery and her latest scans show a healthy brain.

In the Autumn of 2007, Meg embarked on an MA, which she successfully completed a year later and in 2009 she married Josh – so a happy ending all round.

As a result of this we set up the charity, Brainstrust, which is dedicated to improving clinical care for brain tumour sufferers and providing co-ordinated support in their search for treatment. We provide support and advice at the point of diagnosis and beyond, by updating treatment, improving care and, ultimately, saving lives. 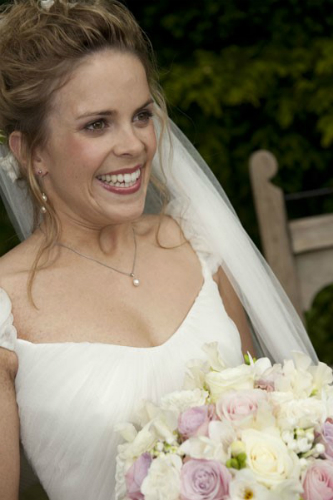