Matthew Stride, from Sutton Coldfield, was 26 when he was diagnosed with an incurable grade 3 anaplastic astrocytoma. After an awake craniotomy, six weeks of radiotherapy and chemotherapy and a second six-cycle course of chemotherapy, the tumour shrank leaving no evidence of disease. Matthew continues to be monitored with six-monthly scans, but eight years on he is stable. Having outlived his five-year prognosis, Matthew is taking on the TCS London Marathon for Brain Tumour Research in April 2023.

The first time I realised something was wrong was during a five-a-side football match in 2014. It was just a kickabout with friends, but I started to notice occasions where things were happening around me and I couldn’t react. When I asked my GP about it, he suggested it could be something to do with my heart.

I had tests but everything came back clear so I was referred to a neurologist at Birmingham City Hospital in May. There were more tests and the vacant episodes I had been experiencing were put down to epilepsy.

It wasn’t until autumn 2015 I finally had an MRI scan. The next working day my consultant telephoned me with the results.

“I was at work sitting at my desk in the middle of an ordinary afternoon when I received the news that brought my world crashing down; I had a brain tumour.”

I was shocked, frightened and confused as I tried very hard to imagine the best-case scenario. I was thinking the ‘lesion’ was something small, it wouldn’t be cancer and it would just go away. However, the scan showed a white mass which had grown to roughly the size of a golf ball in the right frontal lobe of my brain. It was so hard to believe how dire the situation was – apart from the absence seizures I had experienced I felt fit and well. To look at me, no one would know there was anything wrong. 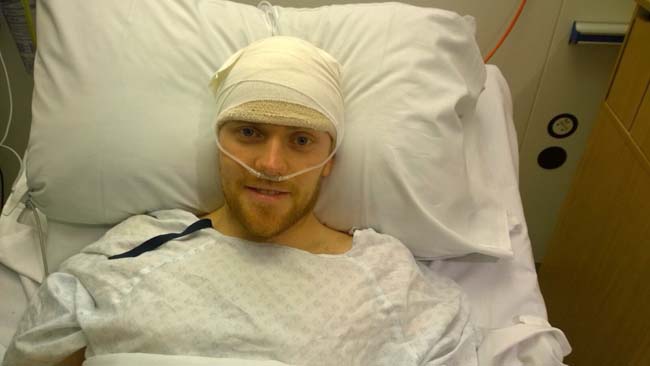 The medical team was very good and talked me through things, so I knew I was facing surgery. The seven-hour operation took place at Queen Elizabeth Hospital, Birmingham, on 6th January 2016. To limit the risk of damage to healthy areas of my brain, I was awake for part of the craniotomy procedure. The idea seemed crazy, like something from a sci-fi movie, but I was assured this was the best way to take as much of the diseased area away with minimal damage to healthy tissue.

About an hour into the operation, I was brought round. It was surreal and exciting with a real buzz in the atmosphere and everyone around me in high spirits.

“It is still extraordinary to recall I was listening to One Direction as the surgeons cut away the tumour.”

Momentarily, I would lose all sensation and suffer temporary paralysis to my arm when they went too close to healthy areas.

With the help of my family, friends and the company I worked for, I recovered well post-op, physically and mentally. We had to wait for the results of a biopsy to see if any further treatment was needed and, although I had always assumed things would be fine, I found I couldn’t speak to the doctor when the call came so my mum was the first to hear the news. 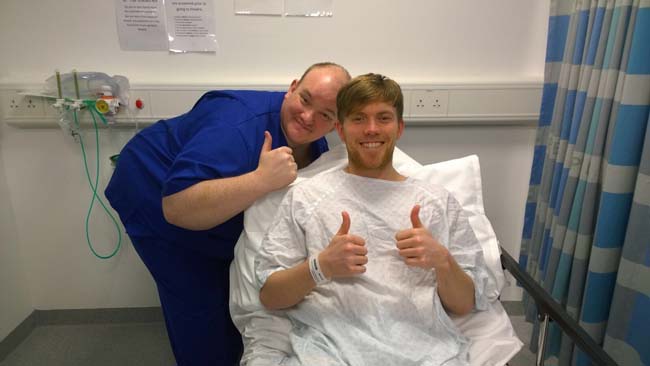 Far from being the benign mass I was expecting, I was shocked to hear it was a grade three anaplastic astrocytoma. We were horrified as the implications of what it meant to have a malignant tumour began to sink in. I was in my twenties, happy, in a job that I loved but I had an incurable brain tumour. Treatment was available but my prognosis was just five to six years, which was devastating.

“When we were told the news, it was the only time I had ever seen my dad cry; it was horrendous.”

I was told the treatment would be gruelling. I was likely to suffer from sickness, hair loss and debilitating fatigue. How naïve I had been to assume life would go back to normal after the surgery.

The diagnosis also meant I was no longer able to drive, and I found it hard to deal with that loss of independence. I relied on public transport as I went through radiotherapy Monday to Friday for six weeks. I took chemotherapy tablets at the same time and watched as my hair started to drop out and I put on weight from the medication, over-eating because the drugs increased my appetite, and not being able to exercise.

“At the time it was quite experimental to have radiotherapy and chemotherapy together. It came with a lot of risks and possible side effects, including infertility.”

But I was told it was the best chance to hit the tumour hard, and at that point I was just thinking about staying alive for as long as possible. My treatment finished at the end of March 2016 and I had a break before a six-cycle course of another chemo drug aimed at preventing the tumour from growing back. 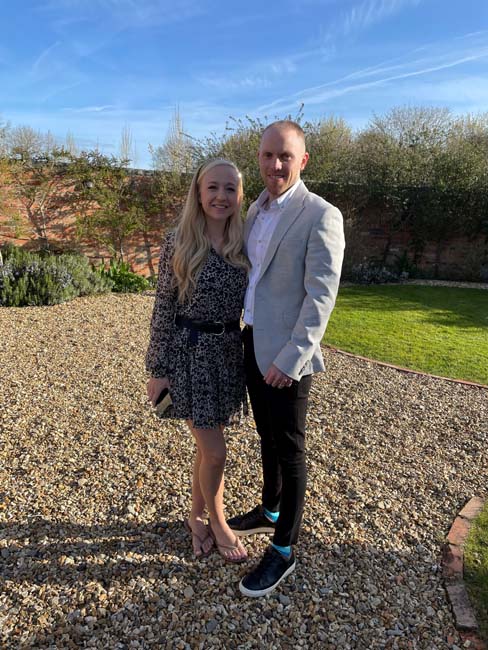 The recovery went well and two years on, in April 2018, I was back behind the wheel again which was great. I was having scans every three months, then every four to check on the tumour.

Then in March 2022 it was decided they could be every six months because everything was stable. My most recent one in September came back fine and the tumour isn’t currently visible. I haven’t had a seizure since the operation but I’m still on anti-seizure medication as a precaution for me to continue driving.

We discussed my diagnosis early on. She was obviously shocked, but luckily it never put her off me, she’s always been really supportive, and she understands everything. We bought a house together in August 2021 and were planning to take the classic picture outside the front door, but I actually took that opportunity to propose. Her parents were in on it, so they were ready with the camera when I got down on one knee on our doorstep.

We got straight into wedding planning and went to the Cotswolds to tie the knot but we actually had our honeymoon before the wedding. We wanted to go to Disneyworld in January when it’s quiet, and it was an unbelievable holiday.

We’re enjoying just being married and doing the house up at the moment, but we want to have a family. I had a fertility test a couple of years ago and fortunately everything is fine. I know it was a gamble with the treatment, but it paid off because I’m healthy and the risks didn’t come to fruition.

“I feel worlds apart from the man I was when I was diagnosed.”

I would never have dreamed seven years on I’d have got married, bought a house, and gone on some incredible holidays.

It’s definitely been a roller coaster, but I wouldn’t change any of it. It made me appreciate life more, say yes to more things and take opportunities - because you never know what’s around the corner. I believe things happen for a reason and it’s all worked out well in the end. 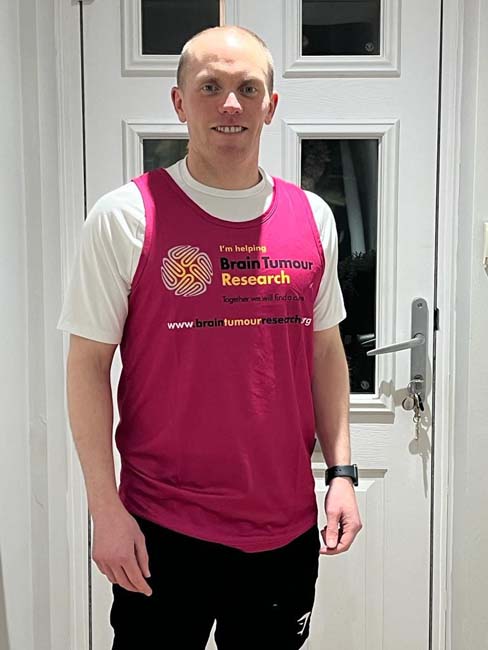 I’m now training to run the TCS London Marathon in April 2023 for Brain Tumour Research to help try to find a cure for brain cancer. 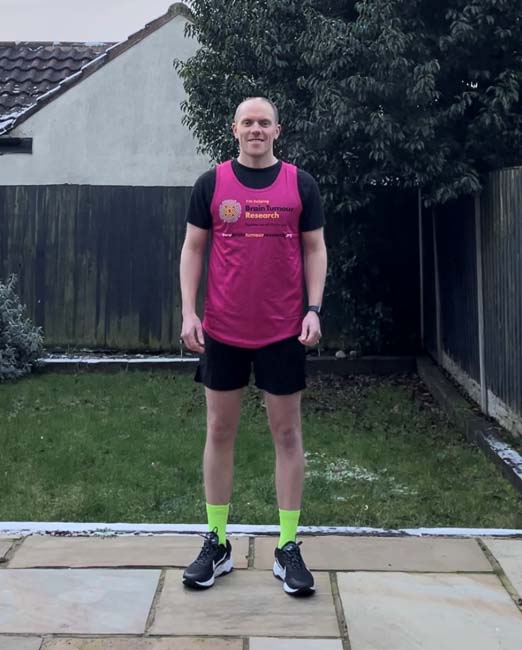