Matt was diagnosed with a rare subependymoma brain tumour seven years after first being diagnosed with vertigo. He underwent surgery to remove the tumour in 2018 but has been left with life-changing effects, including 50% blindness, fatigue and memory problems. Being the local postman has been his saving grace.

His wife Julie tells his story…

Matt and I met when we were both working shifts at our local pub. He was a fit, healthy guy who loved watching sport, especially wrestling and his beloved Tottenham Spurs playing. We have been together for 19 years and married for 15. He is now the postman who delivers the mail in our village of Cranfield in Bedfordshire and I work for Thames Valley Police as a civilian in the control room. 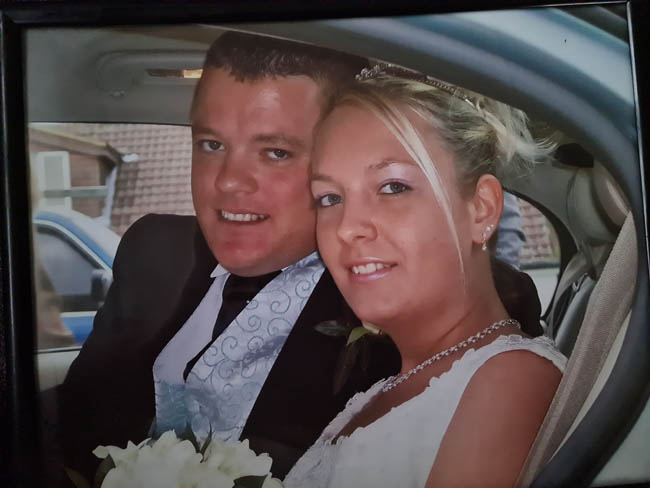 In 2011, Matt started suffering with what we were told was vertigo brought on by labyrinthitis.  He went back and forth to the GP for seven years until in February 2018, the GP thought it might be something neurological and referred him. Matt wasn’t seen in neurology at Bedford Hospital until August of that year. They did tests including asking him to walk a straight line with his eyes shut and concluded he may have inner ear damage. However, he was referred for an MRI and to ENT. A couple of weeks later, the technologist doing his scan worried him when she told him he needed to come back at 9.30 am the following day. She said she had found something serious but couldn’t say what.

Matt then had an MRI with contrast and was going to be sent home to await results from a doctor. Obviously, he was really concerned and begged for someone to tell him what was going on. Eventually, a neurologist came and told us they had found a 6cm x 6cm tumour. They said it was slow-growing and that he would be referred to neurology and oncology at Addenbrooke’s.

“A day later, we were out to lunch with friends when Matt had a massive tonic-clonic seizure. It was absolutely terrifying. Matt stopped breathing for four minutes and I really thought he was dead.”

Matt was taken by ambulance to Bedford Hospital and spent two days there where they started him on a low dose of Keppra, a drug to treat epilepsy, as well as steroids. I was concerned that the MRI scans and the stress Matt had been under, realising they had obviously found something, had brought on the seizure out-of-the-blue, but we were told it was a coincidence. 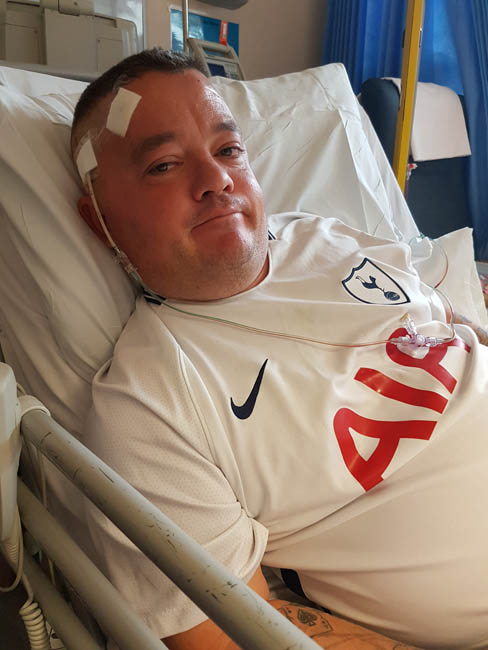 Ahead of his impending surgery, I was often in tears, but Matt was very matter-of-fact, possibly numbed because of all the medication he was under. The only thing that helped me was getting everything organised ahead of him going into hospital.

“On 7th September, Matt was in Addenbrooke’s for surgery. I was expecting it to take around six hours, but he was gone for ten. It was an agonising wait, not knowing if I would ever see him again.”

Luckily, the surgeons were able to fully remove the tumour, which they thought was a meningioma, but turned out to be a subependymoma, a rare type of grade 1 ependymoma that develops from the glial cells that line the ventricles of the brain and the spinal cord. However, Matt has been left with lasting effects. The surgery has meant he is now registered as sight impaired, having had damage to his visual pathway because of the surgery. He has lost 50% of his sight on the left side of both eyes, which means he will never be able to drive again and struggles when he is unfamiliar places and has to rely on my help. He also has issues with his memory and I have to write lots of notes to remind him to do things. 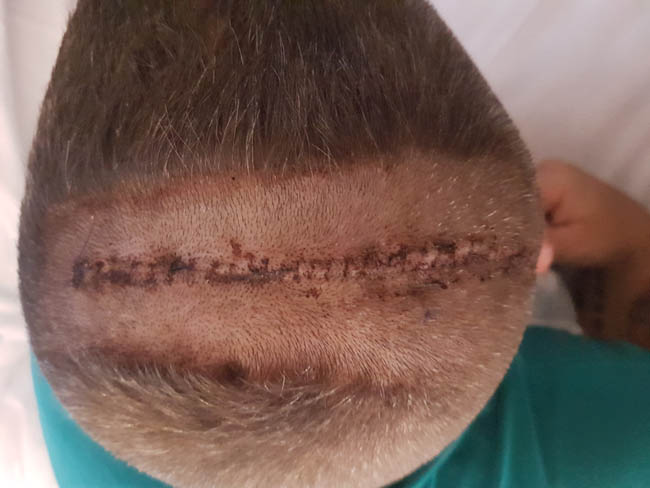 He is so lucky to have his job as a postman in our home village. It means he can walk to and from work. And pushing his trolley is great because he has weakness down his left side and because his balance isn’t good either he uses the trolley as support.

Everyone seems to have a soft spot for Matt. When he was having surgery, people sent him lots of cards and were popping into the Coop which has a little post office for news. When he finally was back at work six months after his operation, his customers were constantly offering cups of tea and cake or a place to sit and rest for a while. Everyone seemed very concerned but glad he was back on his round.

In April 2019, we had arrived at Heathrow on our way to New York for a few days. I had bought tickets for WrestleMania and we were excited about visiting the Big Apple for the first time. We had just stepped out of the minibus which took us from the car park to the airport when Matt had another massive seizure. The lovely minibus driver quickly called for an ambulance and later even brought my car to Hillingdon Hospital where Matt was taken so I didn’t have to worry about collecting it.

Sadly, we didn’t get to New York. 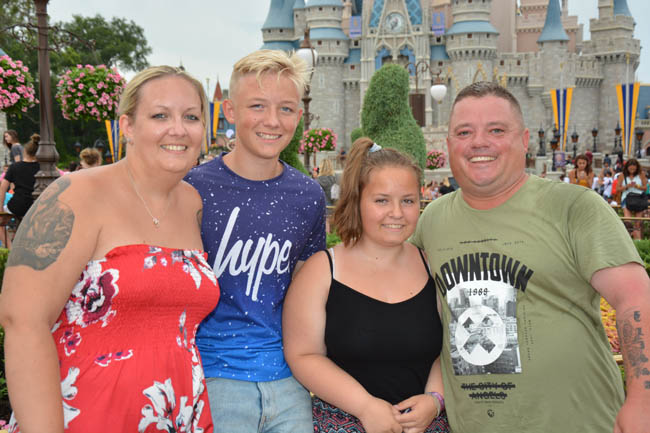 Matt’s dosage of anti-seizure medicine was increased. He continued to have seizures every two to four months, with the dosage being increased each time until he was at the maximum dosage after another seizure in January 2020. Matt didn’t then have another seizure until August – a gap of seven or eight months. We decided not to add another anti-seizure medication to his regime at this stage because of the side-effects and hope he will go a good long stretch without another fit.

We were both shocked to discover the stats about brain tumours and how low funding into research actually is. It’s disgusting that they don’t warrant more investment. Even people with low-grade or slow-growing brain tumours can suffer life-changing side effects.

“People often say how well Matt looks, but they don’t know what he has to contend with, having lost his driving licence and therefore his independence when he became partially-sighted.”

Matt and I have two children, Harry, who is 17 and Elissa, 16, but he also has an older daughter and three grandchildren and has to wait for me to drive him to see them even though they live less than eight miles away. 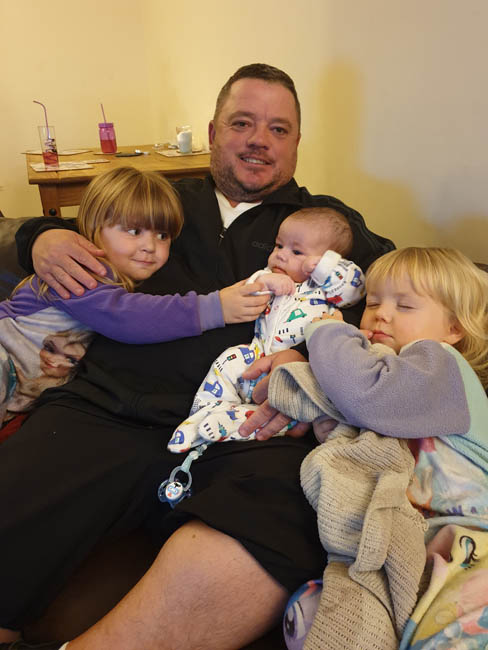 We have registered to do a virtual Walk of Hope in Marston Vale and have set ourselves a challenge to complete 10 miles. We hope to be able to sponsor a day of research to help find better outcomes for brain tumour patients. 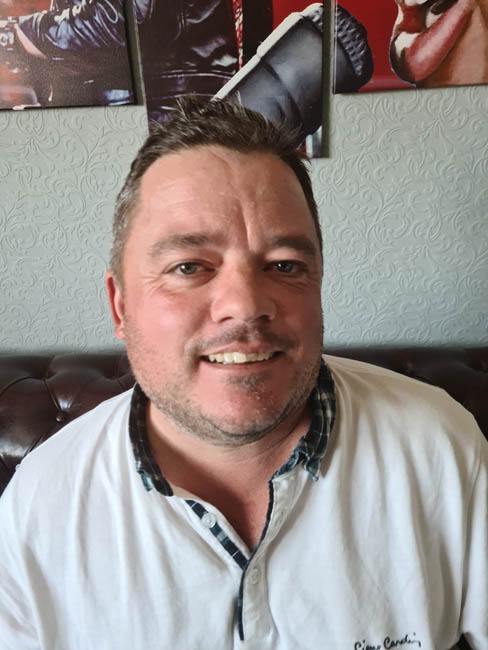