Mother-of-three Linda Goode, an identical triplet from Lewes in East Sussex, started experiencing problems with her speech in October 2021. After several noticeable incidents in less than a week, she went to A&E where a CT scan revealed a mass on her brain. On her way home from a subsequent appointment, she suffered a seizure in the car and was given the anti-seizure medication Keppra. Over the next couple of weeks, she struggled to hold a conversation and developed a fear of talking after learning that doing so triggered her seizures, although increasing her medication helped. In November she underwent a biopsy and debulking surgery and in December she was formally diagnosed with a grade 4 glioblastoma multiforme (GBM). The freelance PE teacher and advisor will be starting radiotherapy and chemotherapy in the New Year.

It was October half term when my symptoms started. I had trouble getting my words out in a meeting and felt a bit ‘jumbled’ when I got talking to friends on a dog walk or in a social setting. Initially, I passed it off as perimenopausal symptoms but after it happened on three separate occasions over a six-day period I became a bit more concerned. I spoke to my sister, who had worked as an A&E nurse for more than 15 years and now leads a large community team, and she advised me to go and get checked out so I went to A&E at the Princess Royal Hospital in West Sussex. It was about 6.30pm when I walked in and roughly 1am on 27 October – my daughter, Mia’s, 15th birthday – when I left. I was given a CT scan and was half asleep by the time I was taken into a room and given the shocking news they’d found a mass on my brain.

“It was such a surprise because I’m so fit and healthy and I know brain tumours are indiscriminate but you never think it’s going to happen to you.”

I was soon scheduled for a full body MRI at the Princess Royal so they could check for cancer elsewhere in my body. When they didn’t find anything and I was told it was looking good in terms of not having any secondary cancer, at the time I thought that was a reason to celebrate. I was given a prescription to pick up on my way home from the appointment with my consultant, but I had a tonic-clonic seizure in the car, which I really wasn’t prepared for. I hadn’t been told about the possibility of seizures so it was a big surprise to me and to my husband, Phil, who was driving when it happened. We rang 999 and were told it would be quicker for an ambulance to come to our house so, whilst the paramedics looked after me, Phil had the unpleasant task of breaking the news about my tumour to Mia. We hadn’t said anything previously because we’d wanted to make sure she had a fun birthday and hadn’t seen the point in worrying her when we didn’t know much.

“Our two sons, Ben and Jonah, were both at university so we were able to plan when we told them but, sadly, with the ambulance turning up we didn’t get that chance with Mia.” 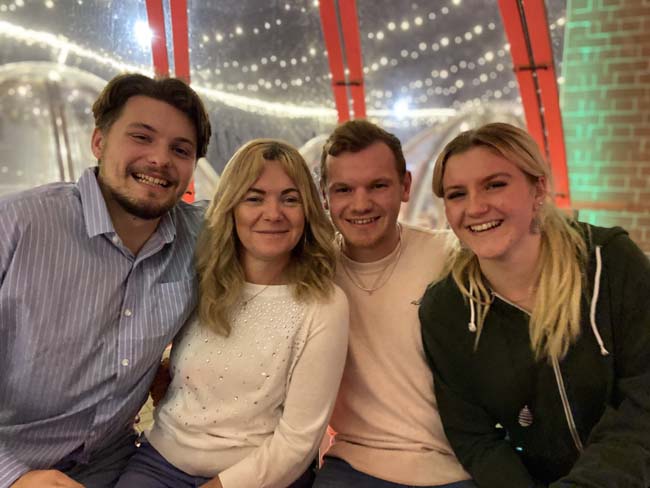 When I got back to the Princess Royal, I was given the anti-seizure medication, Keppra, and things settled down. Phil went to the pharmacy to fill the prescription I’d been given and we were able to go home the same night. For the next couple of weeks, I found it difficult to hold a conversation because talking seemed to trigger my fits and I got scared of doing it. I just needed quiet, or to sit with music, and I could only handle one thing at a time. In hindsight I don’t think my drug dosage was right because over the next couple of days I got involuntary muscle shaking and went to the Royal Sussex County Hospital, in Brighton, to be observed, during which time they upped my Keppra. It took quite a bit of toing and froing between the two hospitals to get it under control but eventually we did. 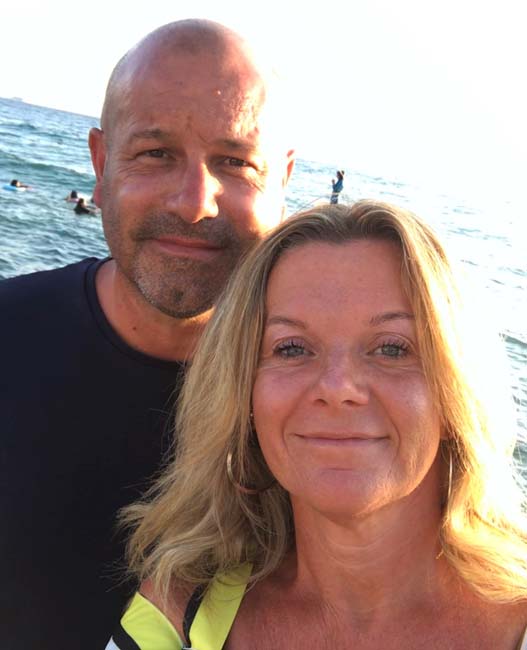 At the beginning of November, I had an appointment with a neurosurgeon at the Royal Sussex who was absolutely brilliant. He went over my MRI scan and was very clear about everything, which was a godsend given the speed at which everything had happened. He said he suspected I had either a CNS lymphoma or brain cancer, but it was likely to be cancerous because of the way the dye was showing up on my contrast MRI, which was the reason he gave for proposing a craniotomy and biopsy for 26 November. I decided to go ahead with the operation and had an MRI the week before which showed my tumour had grown 2mm in 10 days.

“It was the phone call telling me about my tumour’s progression that was really damning because I realised it wasn’t going to stop growing unless we did something.”

I started doing breathwork, as recommended by a friend, because I wasn’t able to cope with too much stress and focusing on long, slow breaths helped me to calm down. I followed an Instagram account called Breathe With James and that’s given me a lot more confidence. The neurosurgeon was puzzled about my speech issues as the tumour didn't seem to be in the area of the brain connected to this, but the morning of the craniotomy a closer MRI inspection showed it could cause slight problems. I had already researched the benefits of a low-carb ketogenic (‘keto’) diet in potentially reducing blood glucose that cancer thrives on so about 11 days before my operation I started on that. There remains a huge gap in medical evidence for it, but I wanted to feel empowered to start doing what I could to help prevent my tumour from thriving. 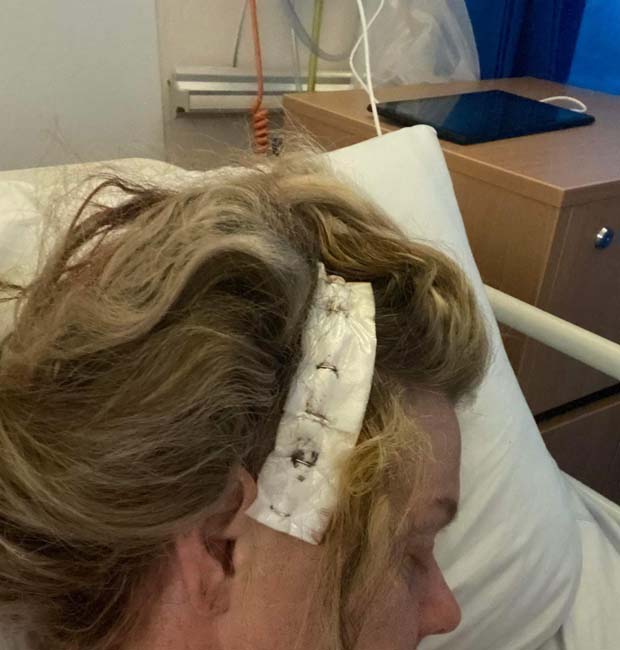 I went into theatre at about 10am and was out by 2.30pm. According to my notes my tumour was ‘majorly debulked’ but there was no mention of any prognosis, which I was thankful for because I’d rather not know. I was in neuro recovery overnight and then got moved to a general ward for two nights before being sent home, where I was much more comfortable back in my own bed. Phil noticed a change in my speech immediately; I was more confident and was able to manage things much more easily than I could pre-op.

“I’ve also been seeing a speech therapist but, to be honest, if this is the worst it ever gets then so be it.” 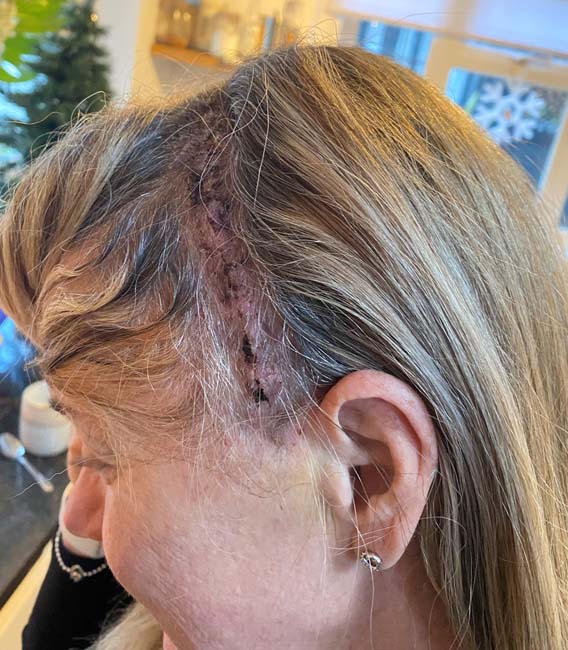 I got my biopsy results in December, about 10 days after my operation, which is when it was confirmed I have a grade 4 glioblastoma multiforme (GBM). Phil and I knew from previous consultations it was likely to be cancerous but we kept it to ourselves until we had an official diagnosis on paper. It isn’t the news you want to hear but I had mentally prepared myself, as much as possible, for the worst; Phil to a lesser extent. I needed to understand the difference between the two possible diagnoses – if I had the lymphoma, I would have been moved to the Royal Marsden Hospital in London, whereas for the GBM I’ll be staying at the Royal Sussex in Brighton. I knew I’d have a fight on my hands whatever happened and am now preparing to go to battle. I’ve had a series of appointments and have been given dates for treatment starting in the new year. I’ve had a radiotherapy mask made and am due to start six weeks of chemotherapy and radiotherapy on 4 January. They’re going to throw everything at it and so am I. 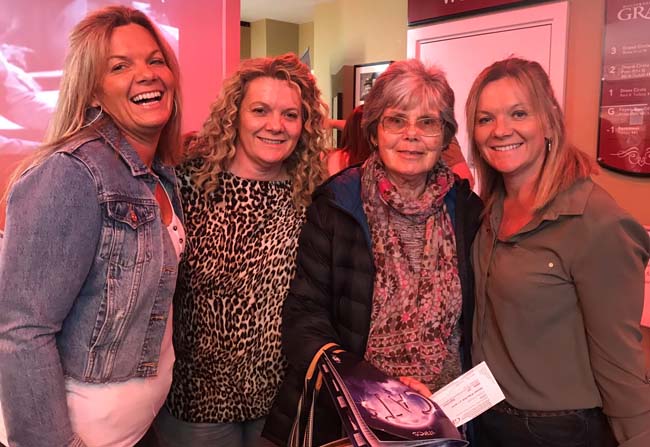 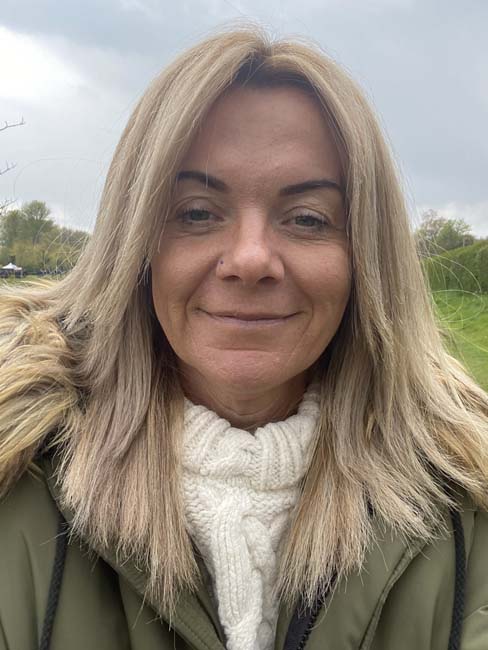