Kye McIntyre, of West Sussex, was a happy, healthy 10-year-old boy who had enjoyed a day out at the park not long before becoming unwell in November 2020. He was rushed to hospital after suffering a seizure at home and, despite initially being suspected of having had a stroke or encephalitis, was eventually diagnosed with a brain tumour. The location of the tumour prevents doctors from being able to operate, therefore their main focus is managing the epilepsy it causes. Kye suffers tonic-clonic seizures in his sleep and focal seizures when he is awake and has developed an eating disorder as a result of having a percutaneous endoscopic gastrostomy (PEG) fitted, but his scans remain stable and his family hopeful.

Here is Kye’s story, as told by his mum Jade …

Kye is now 11 years old and has two brothers, Sol, seven, and Fin, 13. The day before all our lives changed, he seemed perfectly healthy and had been at the park near our home in Crawley, West Sussex, playing on his little brother’s quad bike, whizzing around on it without a care in the world. When he woke up the next day feeling sick, I thought maybe he’d just swallowed some mud at the park. He kept going to the toilet as if he was going to throw up but didn’t and, when we finally settled him on the sofa, I decided to pop out to Tesco, leaving my husband, James, who was working in the study, to keep an eye on him. 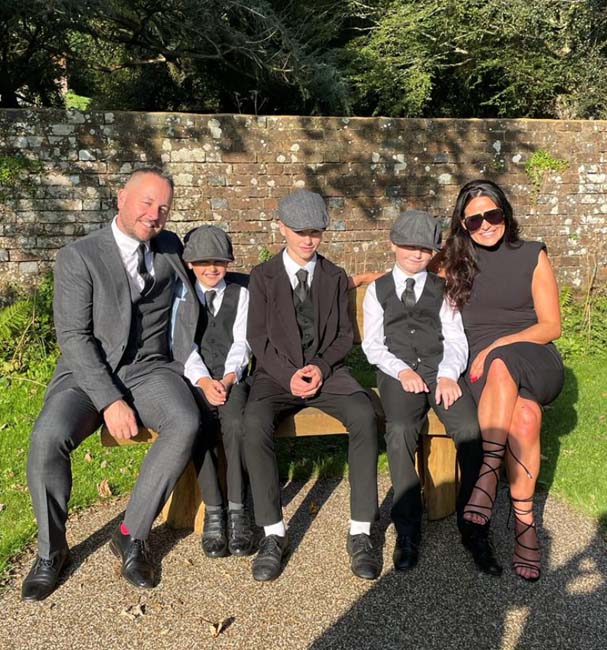 It wasn’t long after I’d left that James heard a choking sound and, thinking that Kye had been sick in his sleep, ran into the lounge. We now know that sound as the one Kye makes when he comes round from having a seizure but, on that day, James tried to get him up thinking he was choking on his own sick and found that he was a dead weight and completely unresponsive.

“He managed to get him to the bathroom but couldn’t wake him so put him in the recovery position, dialled 999 for an ambulance and then called me.”

I got home as the ambulance arrived and immediately the paramedics said Kye had had a seizure. They asked if he was known to have them and so I told them about a febrile convulsion he’d had from a high temperature when he was two, which was eight years earlier. They decided to take him to hospital to get checked out and, when we got to East Surrey Hospital in Redhill, Kye still hadn’t recovered or fully regained consciousness so they started doing X-rays, CT scans, blood tests, the whole lot. His CT scan showed some swelling which we were told was likely to be from either a stroke or encephalitis.

“We were told straight away they didn’t think it was a brain tumour, which made it all the more shocking when we later found out that’s what it was.”

They started him on antibiotics and kept him in the hospital for more than a week. He was so poorly, having seizures every few hours, that it was really hard to understand how he could go from having nothing wrong with him to suffering so much all of a sudden. Eventually they did an MRI scan and it was then that we found out he had what they said was a lesion on his brain. I didn’t understand what that meant at the time but they sent us home with anti-seizure medication and said they would be looking to transfer our care so would be in touch. 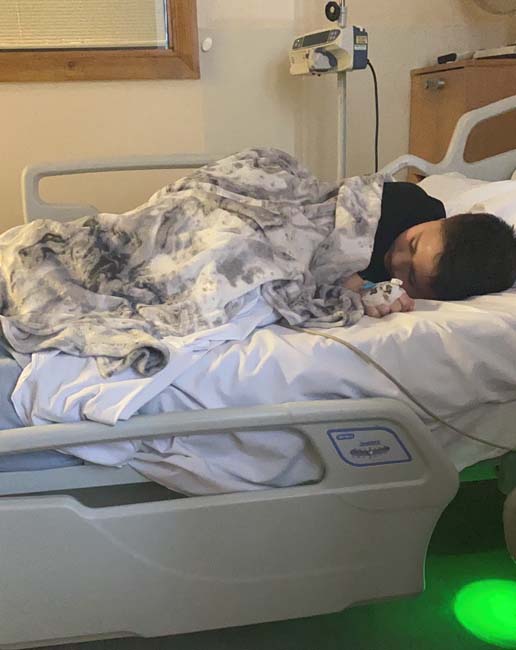 We spent the Christmas period trying to give Kye his twice-daily medication but he’s got attention deficit hyperactivity disorder (ADHD) and sensory processing disorder (SPD) which makes him oral adverse so he won’t let you put anything in his mouth and some days we just couldn’t get him to take it. The medication needs to be taken strictly 12 hours apart so it was quite a battle. In January the doctors told us they believed Kye had a brain tumour and they sent his scans to the Royal Marsden Hospital in London to find out whether or not it was cancerous. Due to the location and size of the tumour, they ruled out doing surgery, including a biopsy to identify which type it was, and instead decided to focus on managing the epilepsy he had developed as a result.

“The longest Kye’s gone without seizures in the past year is 10 weeks.”

Sometimes he’ll go just one or two weeks without but other times it’ll be six or seven weeks so it’s really unpredictable and they can come in clusters. He suffers full tonic-clonic seizures when he is asleep, which are really violent; his whole body shakes and he can choke – he’s not aware of those. The focal seizures are smaller and come when he is conscious. He’s aware of them because he can say when they’re finished. They tend to last about 30 seconds but can come in clusters – 20 in 24 hours is the most he’s had. 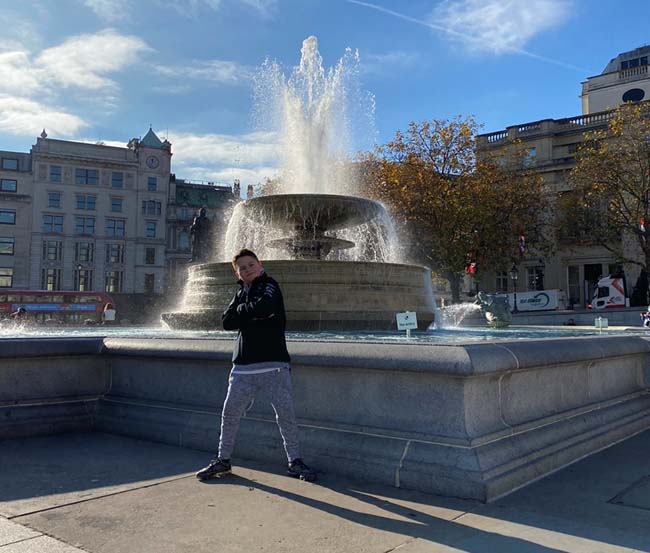 “He knows when a seizure’s coming on because he gets a kind of aura where he feels sick and has an upset tummy.”

He can tell us he feels like he’s going to have one and we’re able to tell him ‘we’re here, we’ve got you and if anything happens we’ll help you’. It’s horrible for him to feel like they’re coming on and it can make him scared to go to sleep. We have emergency medication for if his seizures last more than five minutes because you get into dangerous territory after that. He could go into ‘status’ which means he could stay in it and not come out. The medication we have is to relax his whole system but it can also relax his breathing too much so we have to call an ambulance at the same time if that happens. You learn to become an expert quite quickly.

From December to April, we were in and out of hospital and it got to the point where the doctors said they couldn’t discharge Kye again without putting a proper plan in place to make sure he was able to take his medication. By that point we’d tried everything so they decided to insert a percutaneous endoscopic gastrostomy (PEG), a tube that goes straight into his tummy, so that his medicine could be administered through it. 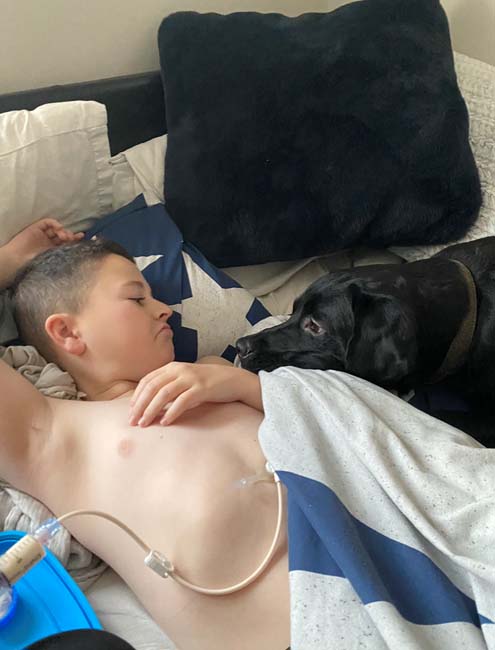 “The PEG worked as far as the medication was concerned but it made him develop an eating disorder, which is something they told us could happen.”

We started having to give him high calorie drinks but, the more he drinks, the less he wants to eat. He’ll have the drinks for breakfast and lunch but sometimes he’ll eat chips, or a Yorkshire pudding, or even a filet-o-fish burger from McDonald’s for dinner. If he doesn’t eat much, we have to give him another high calorie drink for dinner too. We’re trying not to put too much pressure on him or make it a big thing but it’s difficult to manage. He basically stopped eating and lost a lot of weight, dropping from 42kg to 36kg and, as the amount of medication he takes is based on his weight, we had to reduce his medication accordingly, which caused more seizures.

“It’s one thing after another and does feel like we solve one issue just to create another.”

The side effects of his medication cause him to feel sick and have headaches and I think the brain tumour itself causes side effects so he’s not always in a good state of mind. He started senior school in September but hasn’t done a full week yet so we’re trying to manage that transition as well and, with lockdown he has fallen behind a bit, but a lot of children aren’t where they should be so we know he’s not alone.

He had his last MRI scan towards the end of November so we’re just waiting on the result of that to see if anything’s changed. The hope is that his tumour is stable and remains low-grade. He’s not getting all the goodness he needs from food so has regular blood tests to keep an eye on things like his iron levels and I must say they are looking after him really well, but it’s not easy.

“Every MRI we’re told his tumour hasn’t grown or changed is really positive and we are learning to deal with the side effects as our new norm.” 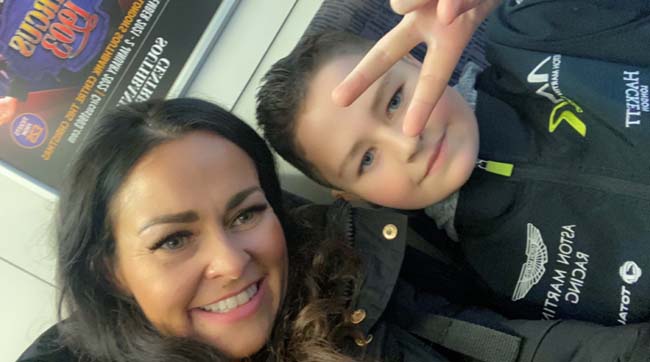 Wanting to feel like I’m doing more to help, I decided to sign up for the 10k Cancer Research London Winter Run on 13 February, with all but £150 going to Brain Tumour Research. I’ve set up a GoFundMe page and have already raised more than £4,000 so have been totally blown away by the response I’ve had. I feel really lucky to have so much support and am now pushing to raise enough to fund two days of research at one of the charity’s Centres of Excellence. This is something that’s been sucked into my life unexpectantly but, when you start looking into it, the statistics surrounding brain tumours are really shocking and the number of people under 40 it affects, as well as how underfunded it is compared to other cancer charities, so it’s nice to feel like I’m contributing something. 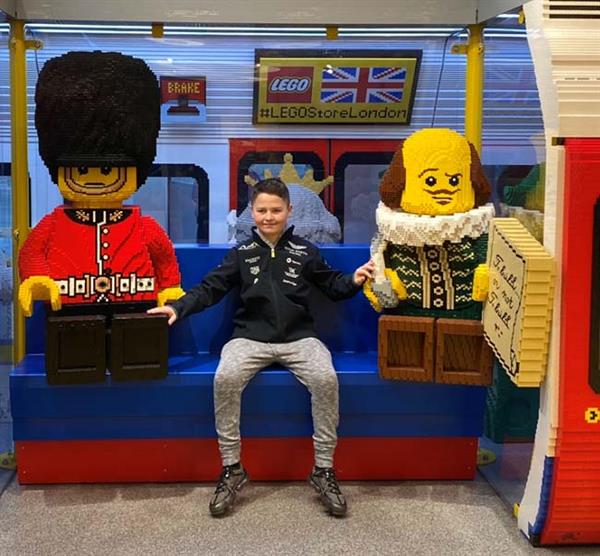