Kerri Parker, from Dereham, Norwich runs The Kerri Parker Model Academy helping thousands of aspiring models start out or further their modelling careers. Kerri herself is an award-winning model and has competed in pageants around the world. She was diagnosed with two different types of brain tumour during the winter of 2013 just before her 30th birthday.

I have always been ambitious, I like to push myself to be the best I can and I set up The Model Academy in that light - so I can help other girls, who want to break into modelling reach their potential. In the early days, I had a couple of bad experiences and discovered what a ruthless and occasionally unprofessional business it can be. Lots of girls aspire to model and the academy was set up to look after them as they enter into that world. I wanted to help girls directly but I’ve also spoken out about the modelling business and tried to bring attention to the less professional aspects of what goes on.

I am always busy – I run several companies and model myself.  In October 2013 I had been to Egypt on holiday and came home feeling exhausted, suffering from unusual headaches. I went to see my GP, who checked me over and told me to keep an eye on my symptoms and if anything changed to return. I was having a hot bath that afternoon when I noticed a rash. I thought it was just the heat, but we called the GP who recommended I went straight to A&E in Norwich.

The doctors at the hospital suspected meningitis and could not decide if it was bacterial or viral, so I was tied up to a drip for a few days. I had a lumbar puncture so that further investigations could be made. I remember really struggling with light and brightness so wore an eye mask. I was kept in hospital for five days while they tried to find out exactly what on the virus was, but, in a strange twist of fate, this led me to have a scan revealing a mass in my brain. We still don’t know what the virus was and it was only when one of the Doctors did some routine tests on my reflexes that led them to do a full MRI scan, I am however strangely grateful that I had the virus and it led to the scan.

I was struggling in hospital being on lots of drips and after five days we agreed that it was time for me to go home. I waited to hear from Addenbrooke’s in Cambridge for more information about the mass in my brain – they suspected it was a brain tumour and more specifically an astrocytoma. I then had to wait a month for a further MRI scan, we came up with the phrase ‘scanxiety’ at this point, which we have since discovered is something many experience.

My life really changed. As soon as I went home I moved back in with my family. We were all reeling from the shocking revelation that I had a brain tumour and I was scared I might have a seizure to the point I became nervous about going out, even a small trip to the shops seemed daunting. But I still had my work to do though and had a business trip planned to Los Angeles, which I carried on planning, despite the worry and fear.

In January 2014 we went to Addenbrooke’s for the next MRI scan. I met with a consultant who suggested I might also have an oligodendroglioma tumour.

I was offered the chance to have a second opinion, but my consultant is considered to be one of the best, so we accepted the diagnosis and all that came with it. My surgery was set for 28th February. We discussed the option of not having surgery and waiting to see how the tumour behaved, if it was aggressive or not, but my family and I agreed it would be better to go ahead, rather than wait and see. During the surgery they were able to remove nearly all of the tumour, however it was noted that during the tests cancer cells were dividing so we then had a further wait while they decided if I needed follow up treatment. The biopsy revealed it was a grade 2 mixed glioma consisting of an oligodendroglioma and astrocytoma.

After surgery I was told I couldn’t fly for six weeks. As I travel a lot with my work, this was inconvenient to say the least and, on top of this, I struggled to find travel insurance. But after six weeks - almost as soon as I was given the go ahead – I took a flight. It was strange - I had this fierce itching inside my head, which felt like it was on fire, but I couldn’t reach inside to scratch it. The great thing however was I felt was getting on with my life. I love my work and it means so much to me. To not work would make the whole situation so much worse. I work with lots of motivated and inspiring people and being in their company helps me stay positive.

After the surgery my family and I thought that would be it, and that life might go back to normal, but I’ve found my concentration wavers and where I used to work on two or thee things at once, now I have to do one thing at a time. I’ve been surprised by this affect on my memory, but I write lots of lists - and lists about my lists - to help me remember what I want to do.

I decided to continue living with my mum while I recovered as I was also struggling with anxiety, something I’ve never had before. Partly this has been put down to the hormonal changes in my body, but of course the last few months have been life changing and I’ve had to make lots of adjustments. I no longer have my driving licence, but I am keen to get this back as soon as I can and stop relying on my Mum to be taxi driver.  Ironically you don’t need a licence to drive a boat, so I thought: “well if can’t drive a car I’ll buy a boat!”  I put down a deposit before my surgery and they held it at the marina for me. I’m now really enjoying all the lovely weather and taking myself and my friends and family up and down the broads in the sunshine. I have the brain tumour, but it is not going to take over, I am focussing on being happy and grateful for the good things in my life.

If I look back, thinking over whether there were any signs of the brain tumour, I realise I hadn’t been well for a while. I had undergone tests for bowel cancer, driven by the fact I had been unusually tired and not myself. So even though the diagnosis was a big shock it was also a relief to know what was wrong and I had not been concerned without reason. When I had my diagnosis, the doctors suggested I take three to six months off work, but I run my own businesses, so there wasn’t much chance of that. I’ve slowed things down a bit, but I love what I do and many of the people I work with are my friends, so I got back into work as soon as I felt ready to.

My Mum, Kathleen, has thrown herself into fundraising for Brain Tumour Research - since January we have raised over £6,000 through a variety of fundraising events. We had a quiz night on a ranch in Spain, some friends did a sky dive, we had a charity football match and I took part in CRUK’s Race for Life. My 30th birthday fell in November just after my diagnosis so instead of the big party I had planned with my friends in Las Vegas we held a charity ball instead. My Mum does most of the organising, while I help with promotion, but I really hope to do more myself in the future.

In December I was given some great news when my scans showed there had been no regrowth of my tumour. I am very proud to be the model for a new limited edition brooch being sold to raise funds for Brain Tumour Research as part of their Wear A Hat Day campaign during National Brain Tumour Awareness month this March.

It’s great to now be able to push on with life and I am keeping as optimistic and busy as I can. I do find myself getting more tired than I used to and I feel weaker when I exercise. I have finally been able to get back to the martial arts classes which I love.

Ever since I was a little girl, my Mum says I’ve been driven and now I have my brain tumour diagnosis I haven’t changed. I feel like I should use my voice, and the business networks I am part of, to highlight the lack of funding going into brain tumour research. I don’t mind making a noise about it and I feel compelled to share my story, as we all need to do what we can to raise awareness. But also I’ve discovered I can’t go on my brain tumour journey alone, when I told my contacts on Facebook that I was struggling with anxiety and depression and had decided, on my GPs advice to take some medication to help, I was surprised by the number of people who came back to me and said, “Me too, I take that.” I had no idea but it certainly made me feel less alone and that it really is ok to ask for help when you are facing difficulties. 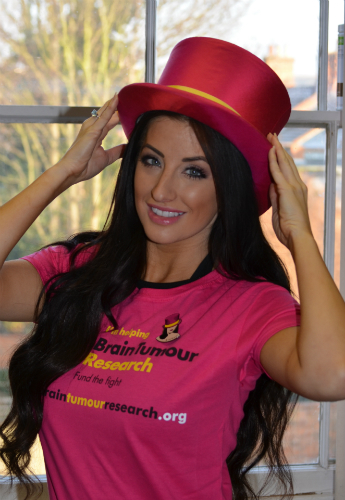