Katie was diagnosed with a grade 3 meningioma brain tumour in October 2014, aged 30. After two craniotomies and radiotherapy, as well as months spent learning to regain her ability to walk and speak, Katie has been told she has months to live. Her dearest wish is to be allowed more time with her beloved husband Steven, who has devotedly cared for her over this traumatic seven-year-period.

Before my diagnosis, I was working in care and too worried about our service users to really focus on my own health. However, I had been going to the GP for about 12 years with a range of symptoms which included hormonal imbalance which made my periods irregular, as well as endometriosis, losing hair and a change in my personality.

“I had become quite aggressive and couldn’t control the words coming out of my mouth, which in turn had a profound effect on my relationship with my partner of four years Steven would react to my cruel words by telling me there was something wrong in my head!”

I went back to the GP complaining of a complete loss of energy, having had crazy headaches for a year beforehand. I was working in Morrisons then and finding I didn’t have the strength to push trolleys. Also, my right leg seemed ‘wonky’ and was giving way a bit. The GP offered to send me for physio, but I asked why this was happening to someone who was just 30. It was only then that I was referred for an MRI scan.

Later the same day, however, the whole of my right side stopped responding and I couldn’t walk. I was taken to Frimley Park Hospital in an ambulance where it was decided I should have an MRI scan there and then. It revealed a mass in my brain. I was taken to St George’s Hospital, Tooting, and put on steroids which got me walking again quite quickly.

I didn’t know anything about brain tumours, so it was a big shock when I heard the news that I had one.

About a month later, I collapsed again with the whole of my right side becoming paralysed. It was discovered I had a bleed on my brain. Two days later, in November 2015, I underwent a nine-hour craniotomy at St George’s which only partially removed the brain tumour located on the mid-line and attached to blood vessels. I had another big brain bleed during the surgery resulting in partial paralysis of the whole of my right side which lasted for a year. After the operation, I was very poorly and wasn’t really conscious of anything. 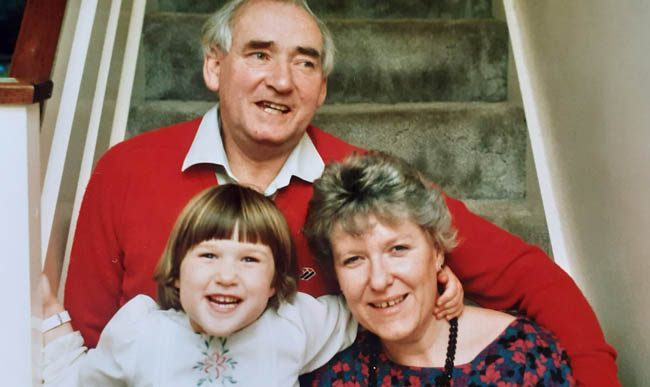 “Although I wasn’t aware, my family was told that I wasn’t likely to survive until Christmas.”

When I was eventually able to process what was happening and in the light of how our relationship had deteriorated due to my aggression, I spoke to Steven, my partner of four years and gave him a choice whether to stay or leave. Fortunately, he told me he wouldn’t abandon me.

I remained in hospital for three months until the end of January when I was discharged into a council-owned ground floor flat as our flat on the second floor was unsuitable seeing as I was unable to walk. I was equipped with a hospital bed, a hoist, wheelchair and a commode.

“By this time, I had put on a lot of weight because of the steroids and had gone up to 24 stone. At my heaviest I weighed 28 stone and was a size 28 – up from my normal size 12-14. It made me feel so ugly and unwilling to leave the flat as I didn’t want to be seen.”

I was too sick to go on any other treatment like radiotherapy and had to fight to learn to walk again with Steven helping me start making tiny movements with my right leg. I had been put under the care of Phyllis Tuckwell Hospice because I wasn’t expected to live and while I was there one day, a junior doctor saw me make a small movement with my leg. Her decision to write a letter to the Bradley Centre in Wokingham, our local specialist rehabilitation unit, for me to get physio was instrumental in me starting the long road to being able to walk again.

The Bradley Centre was a residential unit and whilst I was grateful to have been given the opportunity to work on restoring my ability to walk, it was horrible being away from home. When I had been in hospital for those months after surgery, Steven had stayed with me every night and my mum and godmother during the day, all three taking on a lot of my care because most of the nurses didn’t seem to understand the impact of brain injury. If I had no one with me, I could be left for hours waiting for a hoist to go to the toilet, only to find it was just outside my room.

I left the Bradley Centre able to stand and walk holding on to something, but ultimately it was down to my determination at home with physio once a week locally which meant that by the beginning of 2016, I finally was able to walk properly on my own, even if just a short distance. However, because I was so enormous, I still didn’t leave the flat because I didn’t want to be seen in a wheelchair and have people think it was my size which meant I couldn’t walk.

I was having three-monthly scans and devastatingly, towards the end of June, a scan revealed the tumour was starting to grow. My family asked me what I wanted to do and I said: ‘get married’. They arranged it all in a week, so on 29 June 2016, Steven and I celebrated our wedding. It was such a special day, even though I look back at the photos and cringe at my weight. Having missed out on so much throughout my brain tumour journey, it was lovely to know I had gained a husband and soulmate.

I had six weeks of radiotherapy which cost me 90% of my hair and didn’t really go out or if I did, not without a hat. By this stage, I was going out for short walks without the wheelchair, as long as there were regular benches where I could rest on the way round.

The radiotherapy succeeded in shrinking the tumour marginally, which wasn’t expected and it remained stable until August 2020 when a scan revealed two new tumours in a different area.

“I underwent further surgery on 19 September 2020, which removed both tumours fully, but I lost the ability to speak. The dysphasia meant that I muddled up words and to begin with could really only say ‘yes’ or ‘no’ and was also so confused I couldn’t use my mobile phone or a TV remote control.”

With the help of a speech and language therapist at St Luke’s Cancer Centre at the Royal Surrey County Hospital, I gradually got my speech back.

I had also been put back on steroids, which was a huge blow as I had been studiously dieting and had managed to lose around eight stone. However, with the help of Slimming World, I was determined not to let the weight creep back on, despite being on steroids again. The pounds continued to drop, leading me to being crowned Slimming World Woman of the Year 2020, having reached 8 stone and a slinky size 12.

I underwent CyberKnife radiotherapy in November and Steven was cleaning my wounds when a piece of the skin on my scar line caved in.  I was taken back to St George’s with a hole in my head.

“Three weeks later, I had surgery to remove the front, left-side of my skull. Bizarrely, it felt even more traumatic than having brain surgery. I didn’t want to look at myself in the mirror because I could see, and feel, my brain pulsing under the skin.” 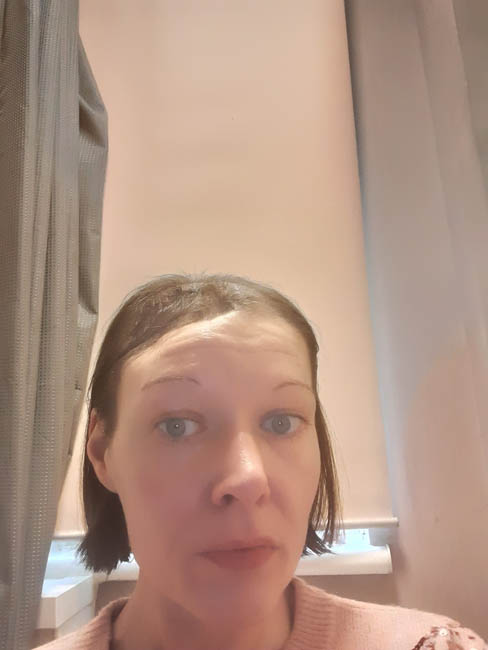 Now that my hair has grown back you can’t really see it, especially if I wear a headband to cover the area as much as possible.

Devastatingly, in April 2021, a scan showed I had two new tumours, one at the back and one at the front of my brain, and if this wasn’t enough, the original tumour had started to grow back. I was told I had months to live and that surgery wasn’t an option.

In May I had CyberKnife radiotherapy on the tumour at the back. They couldn’t do anything with the regrown tumour because I had already had radiotherapy on it previously and they left the tumour in the front. My consultant mentioned in passing that the drug bevacizumab (Avastin) might help me, but it wasn’t available on the NHS for brain tumours. 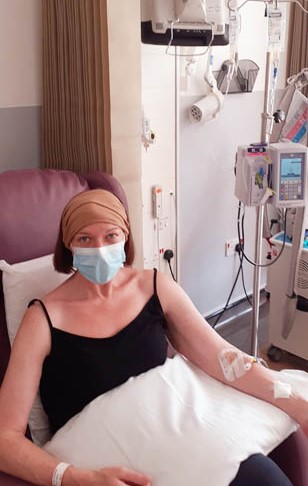 Thanks to Mum’s savings, I have had my first two treatments of Avastin chemotherapy and have set up a crowdfunding page for ongoing treatment which now cost around £2,300 a time, although the first one was £4,700.

“I am 37 years old and have been told I have just months to live, but I don’t want to leave my husband behind. He has been right there at my side caring for me for the last six years while I fight every battle and you can’t make that kind of love.”

I was so determined to be able to walk again after my first surgery and Steven helped make that happen.

“We always wanted children, but I know that’s not going to happen now, but I would love to visit Disneyland Paris and my dream is to reach the age of 40.” 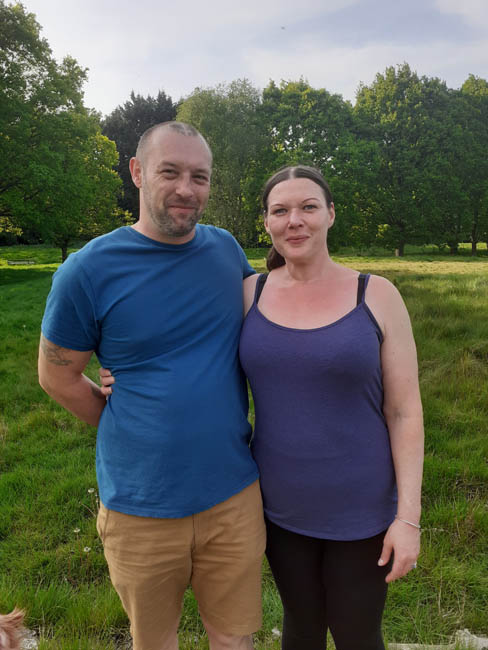 Meanwhile, I am back under the care of the hospice, supposedly preparing to die, but as long as I can continue to have treatment, I am determined to live.

To help Katie continue her treatment privately go to www.justgiving.com/crowdfunding/katie-symmons 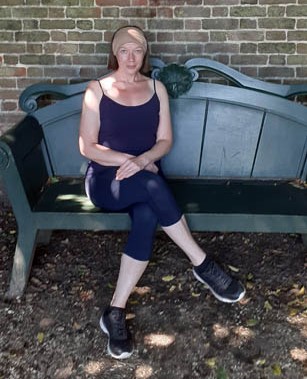