June Oakley, from Bradford in West Yorkshire, first noticed something was wrong in 2019, when her head would hurt whenever she coughed. It took several phone calls to the doctors and a trip to the opticians until, finally, in October 2020, June was given a CT scan. An MRI scan followed and after chasing the hospital for her results, in December 2020, she eventually discovered she had a brain tumour. She has since had her surgery postponed three times and is suffering from increasingly debilitating symptoms. Her delayed craniotomy is now expected to take place on 24 June 2021.

When I started with pains in my head well over a year ago, I rang my doctor, but he didn’t seem concerned at all and didn’t offer me an appointment. The headaches persisted; it particularly hurt when I coughed and I knew something just wasn’t right. In March 2020, I called my GP surgery again and was advised to go and get my eyes tested. I had only recently been to the optician for a check-up but I took the doctor’s advice and went back for another eye test. The check-up cost me £25 and it didn’t detect any reason for my headaches.

A couple of months later, with no improvement to my symptoms, I rang the surgery again and managed to speak to a trainee doctor, who was also consulting with a qualified doctor. They said it sounded like I had a build-up of pressure in my head. I replied: “so, not a brain tumour then?”. After I put the phone down, I got a text message from the surgery, saying they had booked me in for a CT scan and that I would receive a referral letter in the post with details of my appointment. A month passed and I’d still not received that letter.

“On 29 October 2020, I got back in touch with the surgery and was told that when the doctor sent me that text, he forgot to tell the receptionist to book it in.”

The next day, I got a phone call from St Luke’s Hospital in Bradford, to tell me that my CT scan was booked in for the following day. On 31 October, I went in for my scan. Because of the COVID-19 restrictions, I had to go to my appointment on my own. It was really scary and I wished that my son Richard could’ve come with me. Shortly afterwards, I had another scan with dye contrast, because the CT had picked up a ‘large growth’ at the back of my brain, on the left side.

A week later, on 8 November, I was back at St Luke’s for an MRI scan. Again, I had to be alone for the appointment, with the coronavirus restrictions still in place. After that, they said I would need another one with dye and a week later I had to go to Bradford Royal Infirmary for that scan. I was told that the scan images would be sent to a neurosurgeon in Leeds and that a doctor would be in touch with the results.

I waited another few weeks and I finally got an appointment with the surgeon on 22 December 2020. Luckily, Richard was able to join me this time. My consultant explained that the good news was that it looked like it was a low-grade meningioma. But he said it was very large and couldn’t be left untreated. Unfortunately, at 4cm, it was too big to be eligible for gamma knife treatment, so he said surgery would be the best option. I agreed and he said I would be treated as a priority and should expect the operation to take place towards the end of February 2021.

“On 15 January, I had to go all the way to Wharfedale Hospital in Otley for a pre-op assessment. When I got back, someone rang me to tell me I should stop taking aspirin.”

In mid-March I got a phone call to tell me that the date of my surgery would be 15 April and that I was to be on the ward at Leeds General Infirmary for 7am that day. On 10 April, I had another pre-assessment appointment and was all set for my operation.

On 15 April, I arrived at 7am, only to discover that the ward didn’t open until 7.15am. When I got in, they said I was second on the list and should expect to be going into theatre around noon. I spent the morning preparing for my operation and had even got as far as the surgeon drawing a line on my head, to indicate where the incisions would be made, when, to my huge dismay, just after midday, I was told there was no bed was available and that I was to go home. It was a massive blow. I work as a care assistant for a severely disabled man in his home and I’d had to train someone to do my job while I was going to be off work. I have a pet cat, who I’d made arrangements for. I was anticipating being in hospital for up to two weeks and everything was in place.

“On top of that, having been told all the significant risks of the surgery, I’d really worked myself up, only to suddenly be told the operation wasn’t going ahead as planned.”

I went home, and was expecting to hear from the surgeon about my rescheduled craniotomy but after two weeks, I’d still not heard anything. I emailed the surgeon’s secretary to see if they had a date, and she said it looked like it was going to be 10 June but that I would receive written confirmation in the post. That written confirmation never arrived but I did eventually get an email, to say that the surgery was once again delayed and I am now booked in for 24 June.

All the uncertainty and upheaval has caused a huge amount of distress. I have gone back to work but I am struggling, as I’m now suffering from really bad headaches and I’m having problems with my right arm. I’m not sure I’m going to be able to continue working for much longer. I have been turned down for benefits, which is hugely disappointing. I can’t afford to live without my wages and I’m having to take regular paracetamol and sleeping pills.

All my family and friends are disgusted by the way I’ve been treated.

“I’m a 57-year-old grandmother-of-four and my life has been completely put on hold, not just by my brain tumour but by the delayed diagnosis and now the chaos surrounding my life-saving treatment.”

I normally like to go out a lot but I’m having to stay in all the time, as my headaches are so bad. Although the surgery is rebooked for 24 June, I’ve lost faith in the system and this time, I’m reluctant to put things in place in preparation for my hospital stay, in case it’s cancelled again. I’m finding it hard to see the light at the end of the tunnel. I have another grandchild on the way, due in November, and I just hope that I will have had my operation and will be on the road to recovery by then so I can enjoy being ‘Nanny’.

If you have been inspired by June’s story, you may like to make a donation via or leave a gift in your will via www.braintumourresearch.org/legacy. 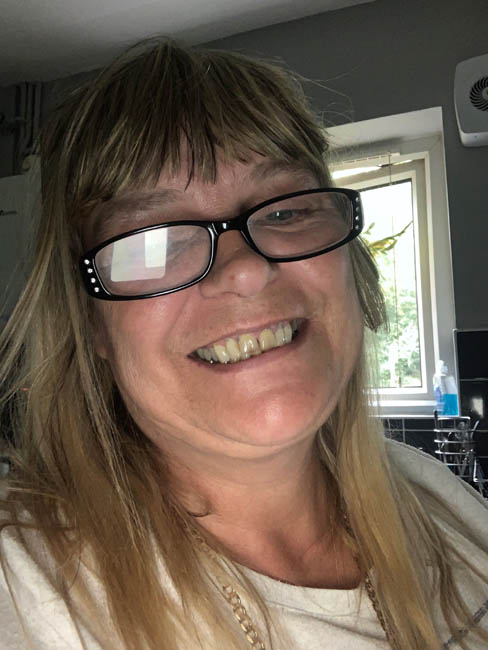