Former teacher and now director of teacher training, Julie was diagnosed with a brain tumour after repeated headaches and visual disturbance. Her tumour, a low-grade meningothelial meningioma, was successfully removed during surgery and Julie, who is married with two grown-up children, is now back at work full-time.

“My crushing headaches and fatigue could easily be explained away as stress-related, exacerbated by upheaval and worry, or my age and perhaps the menopause. My dad had suffered a stroke at 52 – a similar age to me – and I began to feel anxious that perhaps that was happening to me too. I was amazed and astounded to be told I had a brain tumour, something which had never even been on my radar.”

We had been in our lovely new home for less than a year when we found ourselves fleeing with little more than we could carry as Storm Desmond ripped across the north of England.

In our Lancashire village alone, St Michael’s on Wyre, some 35 homes were evacuated not long before Christmas 2015. My husband Ralph and I spent ten nights in a hotel, 6 months in a rental property and another month in a hotel before we could move back into our house 8 months later.

When we did eventually get back in it was July and, somehow, we managed with just two garden chairs and a bed. It had been an awful time, the shock and trauma of it all, and I was exhausted.

It was a struggle to cope with everything that was going on and I started to write a diary in the hope it would help. I thought that jotting down my feelings and recording what was happening would help me put things into perspective. In fact, the diary saved my life as it chronicled the symptoms I was experiencing prior to my brain tumour diagnosis.

My crushing headaches and fatigue could easily be explained away as stress-related, exacerbated by the upheaval and worry, or my age and perhaps the menopause. My dad had suffered a stroke at 52 – a similar age to me – and I began to feel anxious that perhaps that was happening to me too.

I had been to my GP but things were moving slowly and I decided to go private. This resulted in me having an MRI scan at the Royal Lancaster Infirmary. The hospital was right next door to Ripley St Thomas Church of England Academy in Lancaster where I worked as Director of Teaching School, so I left my phone and handbag on my desk when I attended the 8.15am appointment, blithely assuming I would be back at work in no time. As soon as I came out of the scanner, I was told that a radiologist needed to look at it straight away and I must stay in the hospital. Things moved quickly from there; my husband came to the hospital, I underwent more tests including a contrast scan and I was admitted to the ambulatory care ward. I was amazed and astounded to be told I had a brain tumour, something which had never even been on my radar.

From there I was referred to the Royal Preston Hospital and had an appointment with a neurosurgeon within a couple of weeks. At that stage, it was decided we should watch and wait. Although my headaches continued, immediate intervention was not thought necessary. It got to the stage where I felt I would pass out from the pain and then a couple of people at work mentioned I was walking badly but it wasn’t until after I had a fall in the garden that I spoke again to my neurosurgeon. A second scan showed it was now time to take action; I was listed for surgery in a matter of days. The operation carried inherent difficulties, I could lose my sight, my mobility or my speech, but I was resolved to the fact that I wasn’t getting better and this needed to be done. The risks of surgery were now the same as the risks of doing nothing.

The consent form stated that death was a potential risk of the surgery. I wrote a will and put my affairs in order. It was a depressing time but these things gave me peace of mind. It was a chance to think about what I would like at my funeral and made me realise how important it is to talk about such things while we are well and how much easier it makes things for your loved ones when you’re gone.

We went to Blackpool for the day and, as I walked along the prom, I caught myself looking into the swirling sea and thought how simple it would all be if I walked into the water.

I went into hospital at the beginning of November. My tumour, a grade one meningothelial meningioma, was successfully removed. I could not believe how well I felt in hospital after the surgery, but once home it all caught up with me and I had bouts of extreme nausea, an unfortunate side effect of the surgery for some patients, which meant I was back in hospital briefly on Christmas Eve.

By February 2016 I was able to make a phased return to work feeling much, much better. Although I will continue to have scans, my life expectancy has not been affected and there is only a very remote chance of the tumour, which was low-grade growing back.

I feel healthier than I have done in two or three years and, for now at least, feel like I don’t need to worry. I’m back at work full-time and generally coping well. I am exercising regularly and enjoying Zumba classes in the village, I am on a low fat diet and have lost three stone.

If you have been inspired by Julie’s story, you may like to make a donation via the Donate button above or leave a gift in your will via https://www.braintumourresearch.org/legacy 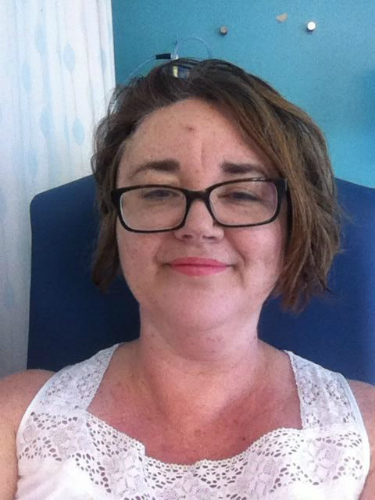