Ten-year-old Jude Upton was diagnosed with a brain tumour, later identified as a grade 4 medulloblastoma, following a trip to Specsavers on his eighth birthday in March 2020. The youngster, from Milton Keynes in Buckinghamshire, had been suffering from a loss of balance, sickness, headaches, tiredness, a loss of appetite and changes in his personality. He underwent a craniotomy followed by chemotherapy, radiotherapy and further chemo, after which his tumour was stable. Sadly, in March this year, further growth was detected. He’s now completed two more cycles of chemo and is awaiting his next scan.

Here is Jude’s story, as told by his mum Katie…

Jude was diagnosed on his eighth birthday. It didn’t go down well because there were lots of things he’d rather have been doing, but I took him to my appointment at Specsavers in Silbury Arcade, Milton Keynes, and asked if the optician would look at him instead of me because I was so concerned. He’d been experiencing a loss of balance, sickness in the mornings, constant headaches, tiredness, a loss of appetite and changes in his personality such as not being interested in playing football, which he usually loves, and becoming more introverted. I’d already taken him to the doctors, where they’d recommended I kept a food diary to identify any unknown allergies he may have had, and to A&E, where we waited seven hours to be told they couldn’t find anything wrong with him, but I knew there was because all of his symptoms had come on suddenly over a couple of weeks. Thankfully the optician agreed and she found that Jude’s optic nerve was swollen. 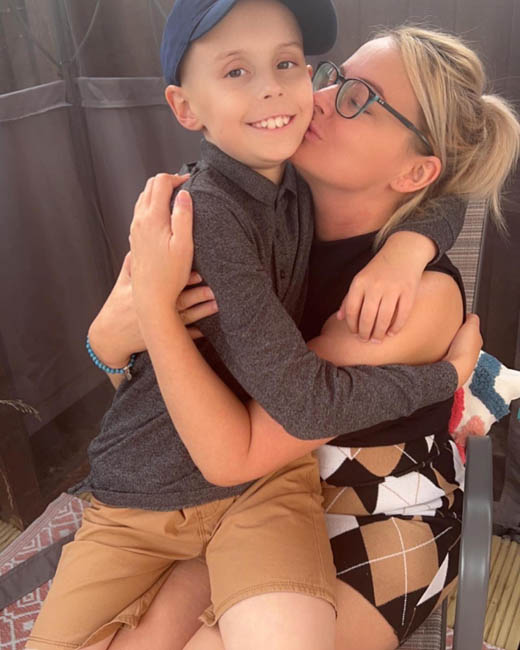 She referred him to the eye clinic at Milton Keynes University Hospital, where they did more thorough scans and sent him to the children’s ward. There they did a CT scan and found a tumour the size of a plum in the back of his head. I was completely baffled and couldn’t take in what they were saying. It was bizarre too because Jude had woken up a couple of weeks earlier asking me about tumours and what they were. I thought maybe he’d learnt about them in school but that wasn’t the case.

“It was as if he had a sixth sense about what was wrong with him.” 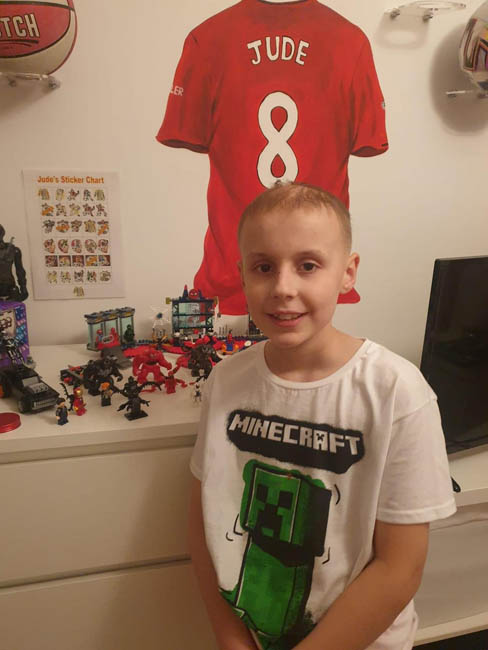 We got blue-lighted to the John Radcliffe Hospital in Oxford, where they did more scans and a number of tests. It was a Friday and they told us he was going to need a nine-hour operation on Monday to remove the tumour. They said we’d caught it just in time because it had started spreading to other areas of his body. There were already two masses in his brain and another on his spine. 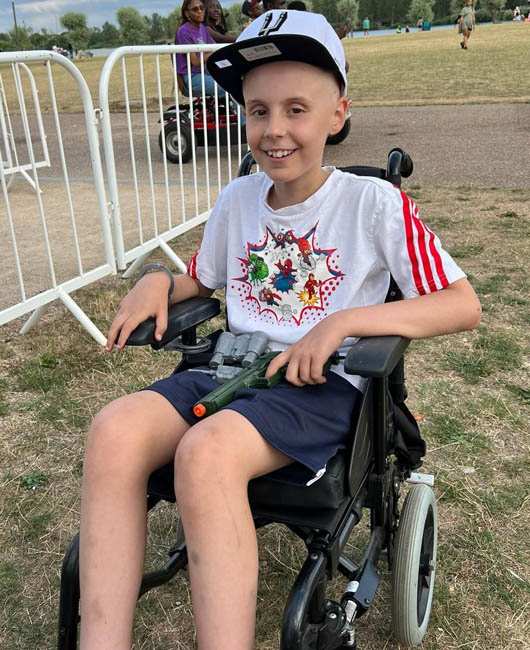 “When Jude woke up after the op, still a bit dazed and confused, he said: ‘Mum my life’s going to change forever now’.”

How right he was! When the surgeons came to check on him, he scrunched up his face and said: ‘I don’t want to be here’. Well, that was enough for the surgeons who just needed to know that he could still talk and hadn’t lost any movement in his face and I found that quite amusing. Jude did lose feeling in the right-hand side of his body, though. It was as if the messages just weren’t making it through to the correct part of his brain. If he tried to move his finger to touch his nose, he’d wobble and shake but, thankfully, with time, he’s built up a lot more strength. 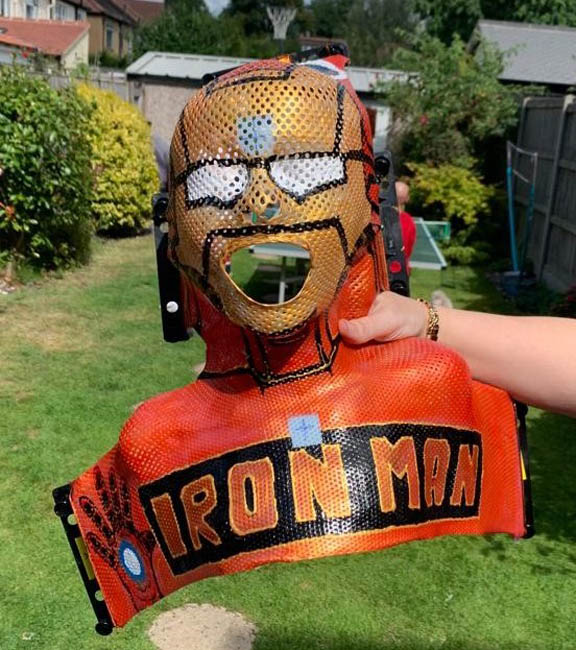 “After a couple of weeks at home, we returned to Oxford so that Jude could have three months of gruelling chemotherapy.

After that he went to the Royal Marsden Hospital in Sutton for radiotherapy. He was so scared that he had to be sedated every day for six weeks, but the staff helped by making him an Iron Man radiotherapy mask, which was really kind because he’s a huge Marvel fan and loves his superheroes. He had 45 minutes of radiation on his head and spine each time and hated every minute of it. This was all during the pandemic when only one parent was allowed in with him at any one time, which made things harder all round. Once that part of his treatment was over, we had some time at home before Jude’s next lot of chemo, which lasted six cycles, and then we enjoyed many months of stable scans. 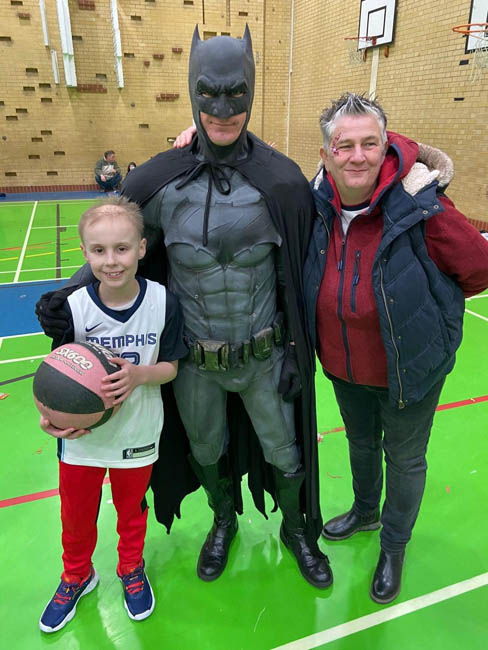 “It was heart-breaking when, in March this year, we found out the two nodules in Jude’s brain and the one at the bottom of his spine had returned.”

He’s just finished another two rounds of chemo and has a scan next month to see how effective that’s been, so, at the moment we’re experiencing a bit of ‘scanxiety’. It’s all been a complete nightmare but Jude’s such a strong boy and is getting through it like an absolute warrior. I don’t know where he gets his strength from sometimes. He currently takes daily hormone replacement tablets which we were warned could cause drastic aging and has already caused him to go through puberty. It’s horrible thinking about everything that he has to go through. 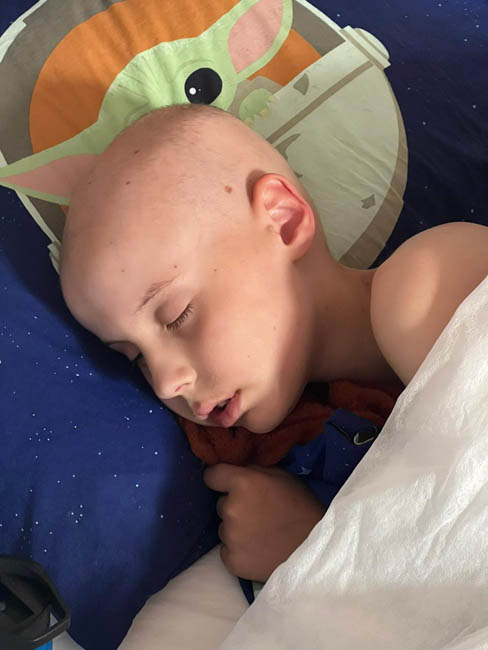 “Jude’s been accepted onto a MEMMAT trial at the Royal Marsden.”

This uses antiangiogenic therapy to treat children with recurrent medulloblastoma and sounds promising. I wouldn’t have even known about it if it wasn’t for a woman from Texas whose son has done well on it. She messaged me online and I did some research and found the trial. Now we’re just waiting to find out when it starts. 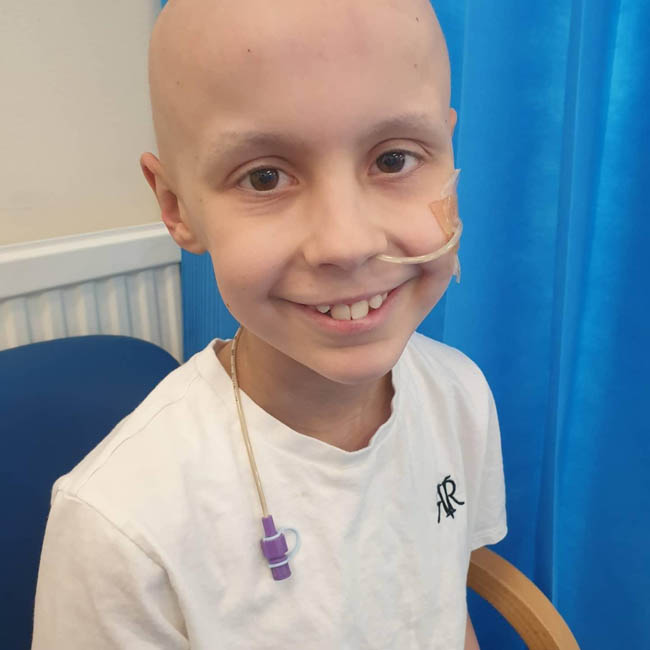 I’ve also requested samples from a biopsy that was taken during Jude’s craniotomy to send to a company in Greece which will do in-depth tests on the DNA cells of his tumour to identify what’s causing them to grow. The only problem is that it’s expensive, so my best friend has set up a crowdfunding page to try and raise what we need. Hopefully this means we’ve still got a couple of options and we’re not going to give up hope.

“I’ve also been giving him medical cannabis known as CBD and so far his blood results are great and he hasn’t had any infections.” 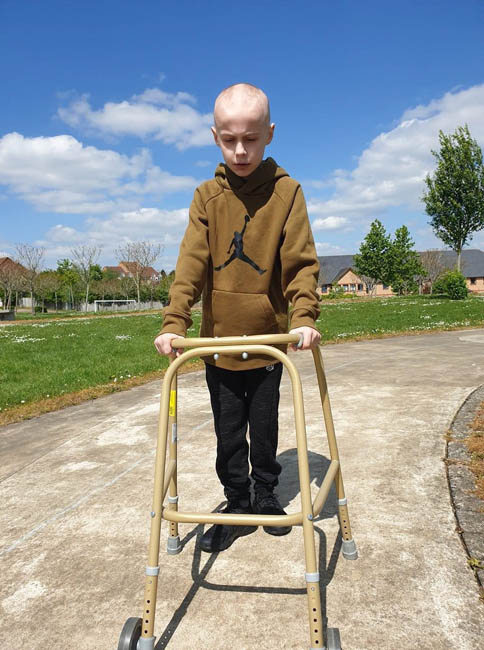 When I look back, I can’t believe everything Jude’s had to go through, and in such a short space of time. He’s developed a needle phobia, which was made worse by the fact he had to have all his childhood vaccinations again after chemo. We also caught COVID during his treatment, which was worrying but, thankfully, wasn’t serious. 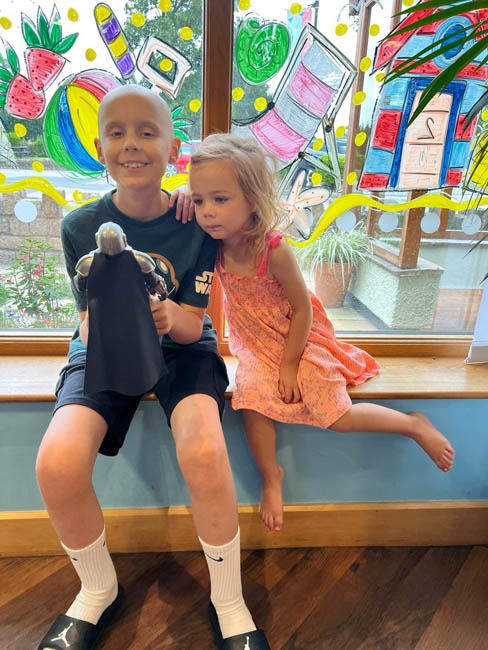 “He’s a cheeky little chappy who loves his little sister Harmony and makes us laugh every day.”

He also loves football and basketball, so much so that he didn’t even own a computer console before getting sick. Now he has so much downtime that he’s got them all, Xbox, PlayStation, you name it. He dreams of being a basketball player and still likes to play when he gets an energy boost so was over-the-moon to meet NBA draft prospect Jeremy Sochan recently. He’s from Milton Keynes, stands at 6ft 9in tall and told Jude that he didn’t play as well as him at his age. Jude’s also received a personal ‘get well soon’ message from former Manchester United footballer Paul Pogba, which was really special because he’s a big Man U fan. 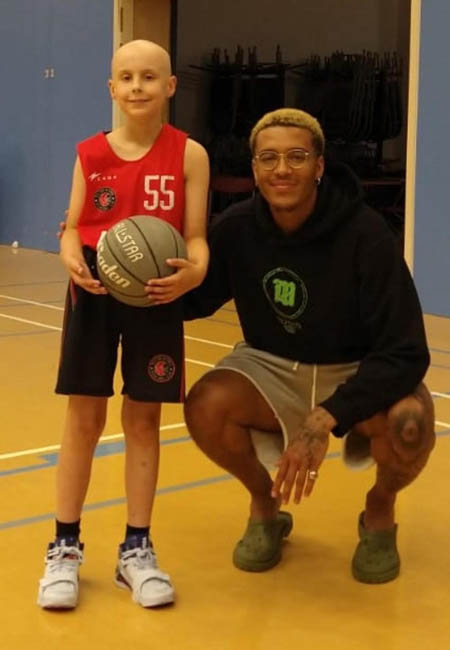 “He also really loves school but doesn’t enjoy going as much as he used to because he’s different to everybody else now and says he doesn’t fit in anymore.”

He’s fallen behind with a lot of his work but I find it hard to nag him to do it when he’s sick because it doesn’t seem important compared to everything else he’s going through. The teachers from Christ the Sower Ecumenical Primary School in Grange Farm, Milton Keynes, have been great, though, and even come to sit with him at home in the mornings when he feels up to it. 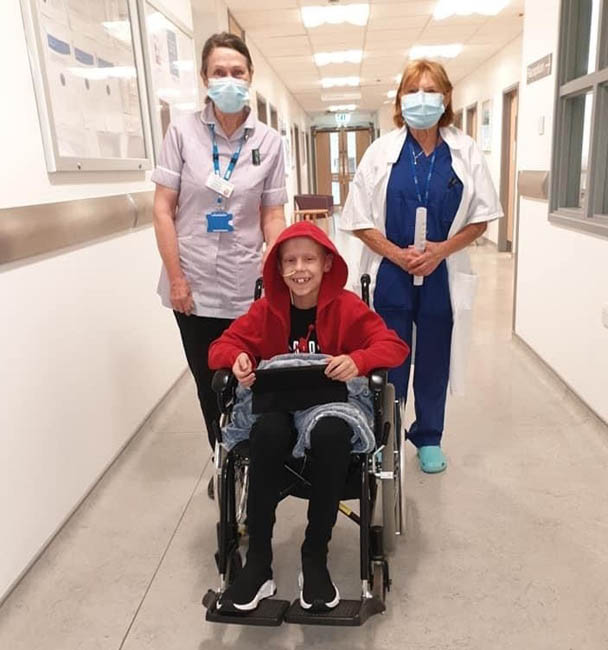 “I was shocked to learn that brain tumours are the biggest cancer killer of children and don’t think that enough people are aware.”

I would recommend that all parents take their children for regular eye check-ups. Jude never complained about his sight but I’m glad I took him and can’t help wondering if I’d done it six months earlier if we would have caught his tumour before it had travelled to his spine. His symptoms came all at once and it was hard getting help but I knew that something was wrong, particularly with his balance problems, and would advise parents to believe in themselves. You know your children better than anyone and if you think something is wrong, don’t stop trying to get the help you need; I’m glad that I didn’t. 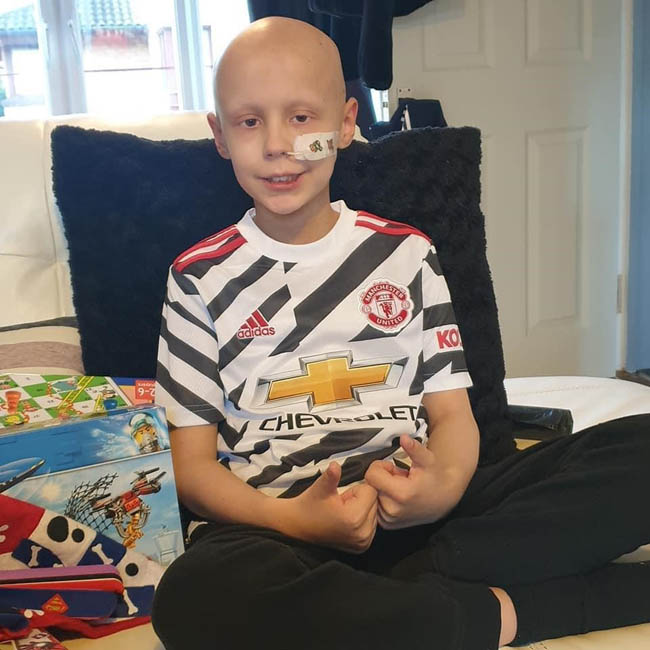 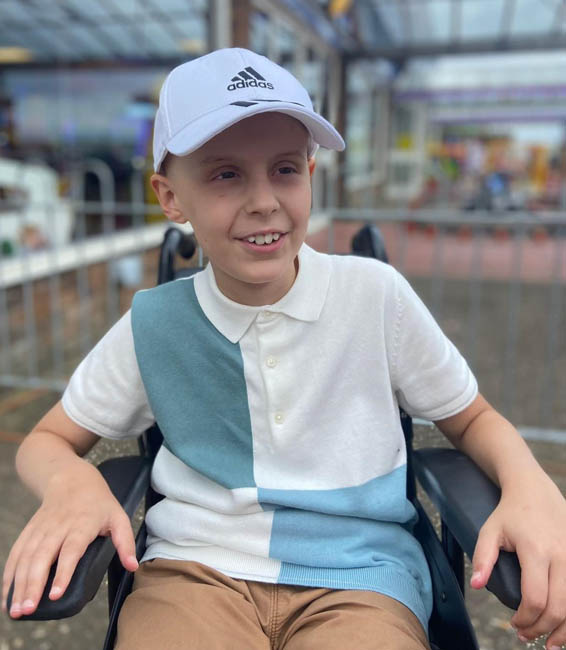