Jett Ebbs was just three years old when he was diagnosed with a medulloblastoma brain tumour in 2020. Since then, he has had 11 operations and has gone through radiotherapy and chemotherapy. On 20 January 2023, he will ring the bell at hospital to mark the fact his last two MRI scans have been clear. His mum, Keiley, is taking on the 10,000 Steps a Day in February challenge to raise money for Brain Tumour Research.

Jett had been absolutely fine until October 2020 when, all of a sudden, he started going cross-eyed. His balance was also off and he was often being sick.

I went to see different GPs seven times but they all said the same thing, that Jett had a viral infection. They all said I should just take him home and give him some Calpol. 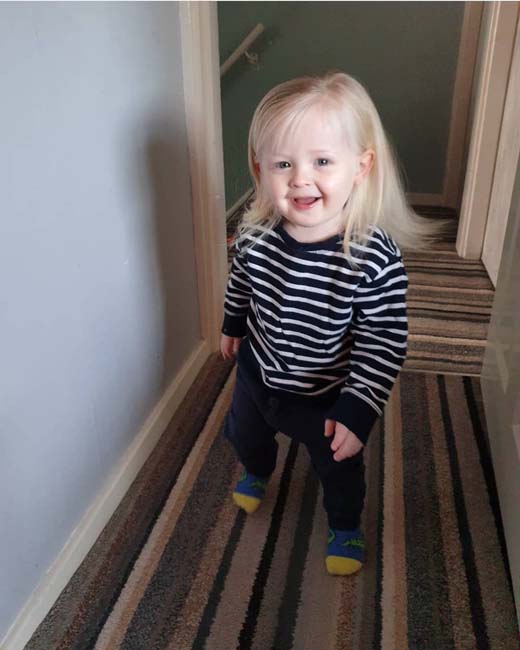 “It was so frustrating, I needed someone to take me seriously. It got to the point where I said to my husband Chris that I thought Jett had a brain tumour.”

On 13 December 2020, my nan died. I remember coming home from her house at four in the morning and I could hear Jett being sick. He was only three and I thought: ‘this is enough’ so I took him to Accident and Emergency at Diana, Princess of Wales Hospital in Grimsby. I told them that I wasn’t going to leave until Jett had been seen by a paediatrician.

After a six-hour wait, a lovely nurse asked: ‘Would it make you feel better if Jett had a CT scan?’ After the scan, the nurse told me that it showed Jett had a brain tumour and he needed to be taken immediately by ambulance to Sheffield Children’s Hospital.

“I was in absolute pieces and couldn’t even stand up. My nan had just died and now this was happening to my son. It was the worst day of my life.” 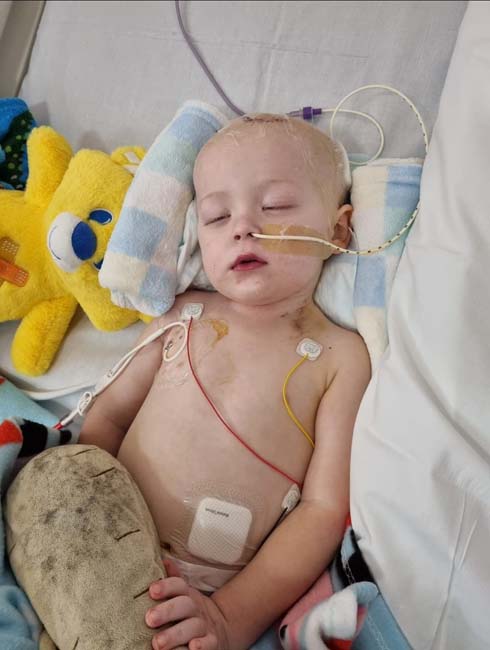 Jett was put on steroids straight away to reduce the swelling on his brain. The team in Sheffield knew exactly what to do, they were amazing.

“On the morning of Jett’s operation to remove the tumour on 16 December, he had a massive seizure. It was horrendous to see and I was terrified.”

Jett was immediately taken for surgery which lasted 10 hours. The operation was successful and they removed the whole tumour which was 4cm long.

“I felt so relieved but at this point we didn’t know what we were dealing with. We were in limbo and I couldn’t eat or sleep.”

We met the oncologist on Christmas Eve and she told us that the tumour had been in the posterior fossa and it was cancerous. I thought we were going to lose Jett. I started googling and read about the really low survival rates for brain tumours. 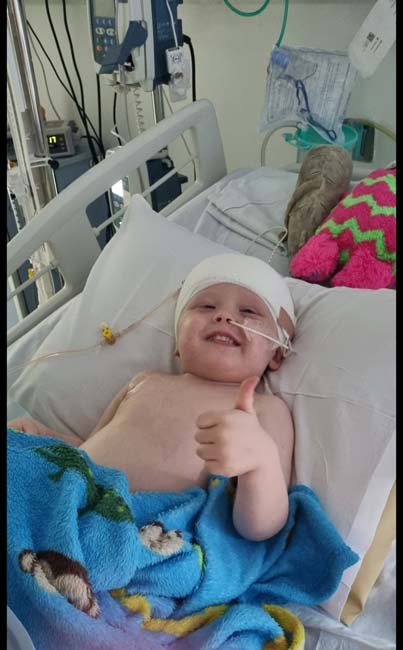 I kept thinking: ‘How and why is this happening?’ because Jett was such a happy and healthy little boy, but all of a sudden his whole life had been turned upside down.

On 30 December, the oncologist confirmed the tumour was a grade 3 medulloblastoma and said Jett would need to start radiotherapy and high-dose chemotherapy the following week.

Unfortunately, he became really poorly and was unable to begin the treatment. He wouldn’t eat and he was really sleepy. He was also going cross-eyed and his heart was beating really fast, everything was going wrong.

Jett had an MRI scan and was immediately rushed to theatre for a craniotomy. The disease had sugar-coated his whole brain and spine. 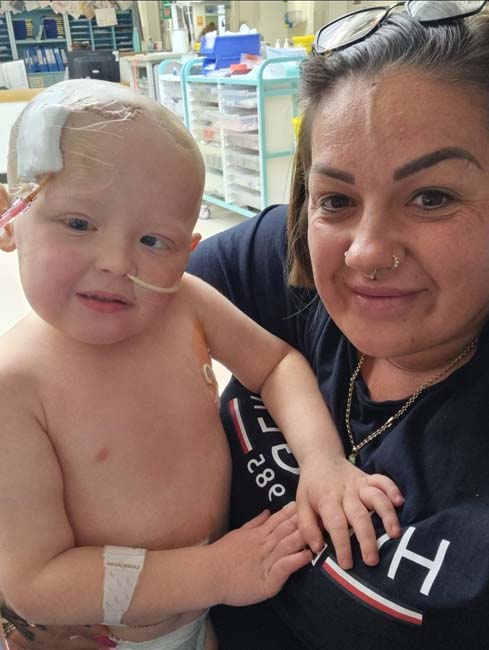 “After the operation, Jett was put into a coma. We were told there was a possibility he would never wake up. It was like being in a nightmare.”

Jett was given a high dose of chemotherapy and it worked really well. He was trying to wake up from the coma so they gradually reduced his sedation levels. When he woke up, he was trying to pull the different tubes out.

“He was back to his mischievous self, it was like a miracle. Then, in a croaky little voice, he said: ‘Mummy, I want a chocolate bar! It was so bizarre.”

Within an hour, Jett was fine and he was moved to the High Dependency Unit (HDU). He had another scan; afterwards, the consultant insisted that I view the image. I thought it was bad news and was hysterical but the scan showed there was no cancer at all on his brain. We couldn’t believe it, it was an amazing day.

The chemotherapy had even reduced the number of tumours on Jett’s spine and we were told he was well enough to begin radiotherapy on the back of his head and spine.

The treatment began on 17 February 2021. Jett was put to sleep with anaesthetic every single day for six weeks. He was constantly tired and wouldn’t eat so he needed to be fed through a tube.

“The chemotherapy went well, but Jett slowly stopped speaking until he didn’t say anything. We were told that this happens a lot but they didn’t know exactly why it happens. Chris and I were really concerned.”

Jett needed to have a shunt fitted to drain some excess fluid. On 30 March, Jett came home which was amazing but it was bittersweet because he ended up back in hospital a week later.

Something just seemed off with him. I shone a light into his eyes and his pupils didn’t do anything so I laid him on the floor and called an ambulance. He was taken to Diana, Princess of Wales Hospital in Grimsby and had a scan which revealed a massive bleed on his brain, so he was taken back to Sheffield Children’s Hospital.

I was terrified because I thought the cancer had returned, but it emerged that his shunt had become blocked which caused the bleed. He had an operation to remove the shunt and replace it with an external ventricular drain (EVD). 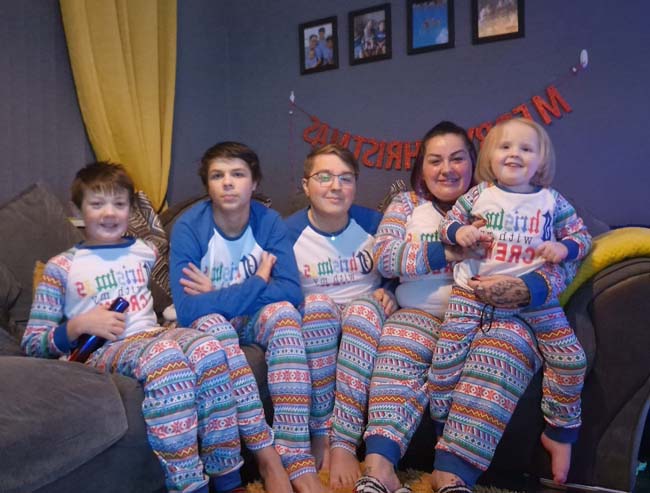 Jett spent the following four weeks in hospital. He was as fine as could be, there was no cancer but he still couldn’t talk or walk. In May 2021, Jett had two weeks at home. We had a little holiday in Cornwall which was really lovely.

In June, Jett had a stem cell transplant and that is when he started talking again. This time he said that he wanted a banana!

“I couldn’t believe it. I phoned Chris so he could hear Jett speak and he was crying down the phone. It was so unreal.” 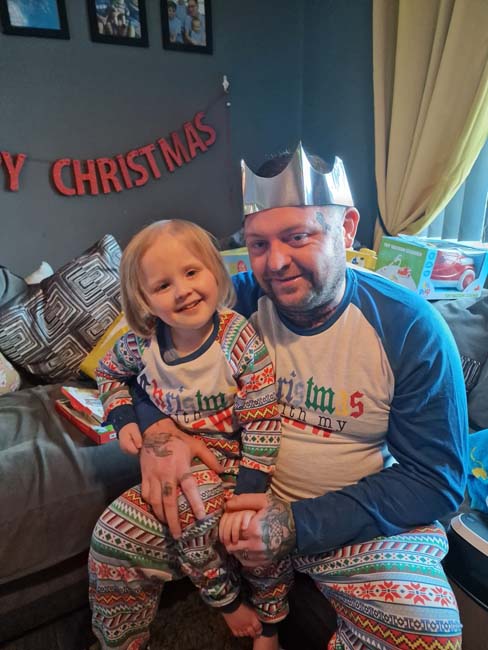 Jett then began a course of high dose chemotherapy but he only had two of the six sessions because his heart couldn’t take it. He became really poorly. He was constantly being sick and he lost all of his hair. But the chemotherapy changed everything because in October 2021, he had a totally clear scan.

“It was the first time I could laugh and smile and begin to think about the future. It felt like we were free and could start living a normal life.”

Because Jett had only had a total of three out of six rounds of chemotherapy, he began a five-month course in December 2021. He handled the treatment a lot better and his hair even started growing back during it.

Jett is now in a wheelchair. He can move his legs but he’s unable to walk so he is now having a lot of physiotherapy. His last two scans have been all clear, his most recent being on 22 October.

“Because of this, he will be going to Sheffield Children’s Hospital on 20 January 2023 to ring the bell. I’m so excited but I know I’ll be crying my eyes out, but they will be tears of joy.” 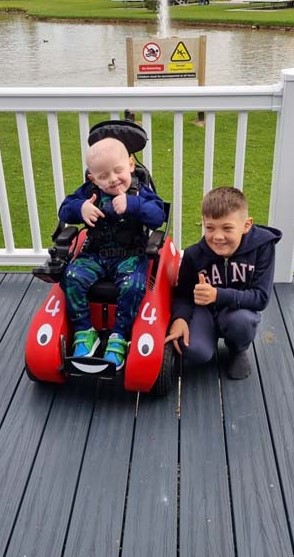 It’s been two years of utter hell so this will give us some closure and will allow us to look forward and be a normal family which feels amazing.

Jett is putting on weight and he’s doing really well. He’s been an absolute little warrior and I just can’t describe the strength he has.

I’m taking on the 10,000 Steps a Day in February challenge to raise vital money for Brain Tumour Research. Brain tumours kill more children and adults under the age of 40 than any other cancer, yet historically just 1% of the national spend on cancer research has been allocated to this devastating disease. I’m really looking forward to the challenge and would urge everyone to sign up and get involved. 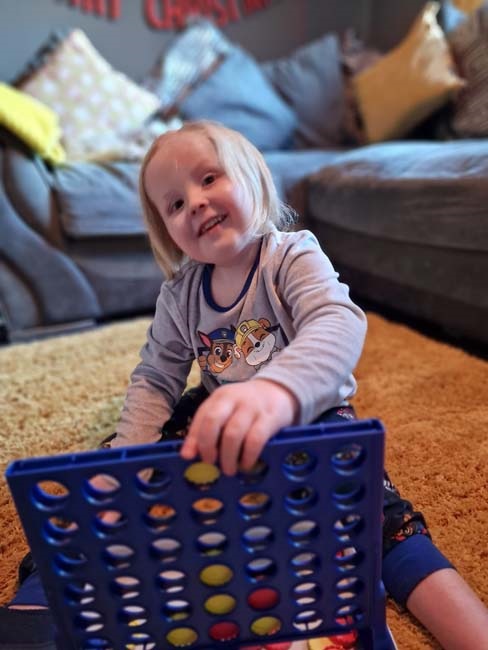