Jacob, from Winkleigh in Devon, was 12 when he was diagnosed with a low-grade optic pathway glioma after a routine eye-test in August 2018. He has been through two brain surgeries and gruelling chemotherapy and his tumour is now deemed inoperable as its location means he would almost certainly be left blind. Jacob is now 15 and, alongside regular scans to monitor the mass on his brain, he is receiving hormone treatment which he will probably be on until his mid-twenties and possibly, the rest of his life. His mum, Elaine, is sharing Jacob’s story to help others who may be navigating their own diagnosis.

Here is Jacob’s story, as told by his mum, Elaine…

My husband, Marcus was heading to A&J Opticians in Torrington for an eye test with our youngest son, Reuben who was 10 at the time and I encouraged him to take Jacob for a check-up too as I couldn’t remember the last time he went. When it came to Jacob’s turn they did all the routine checks and when they covered his right eye and asked him to read the board he replied that he couldn’t see anything.

Initially the optometrist thought he was joking around but after a visual field test – something they don’t usually offer children – they found his peripheral vision was compromised and we were referred to North Devon District Hospital in Barnstaple for an ophthalmology assessment.

At this point I began to think about what I had seen my step-mum go through, she had a pituitary tumour when I was growing up and I recognised similarities in what was happening with Jacob.

We had an appointment come through for the November which seemed so far away and from August to November, Jacob began to experience headaches and vomited almost every morning - we couldn’t wait for the appointment so took him to A&E.

Jacob had more tests which were traumatising for a young boy to have, and it was made worse by the expressions on the faces of the doctors carrying out the assessments – almost like they were flinching with the results they were seeing. The tests seemed pointless, as if it was taking them ages to find out what was wrong. I was so convinced that it was a brain tumour as the cause of Jacob’s symptoms. I remember saying to them that I didn’t think what they’re doing would find the problem and finally Jacob was given a CT and MRI scan.

“Even though I had thought Jacob could have a tumour on his brain, nothing prepared me for hearing those words from the consultant and my sobbing was uncontrollable.”

We were referred to oncology at Bristol Royal Hospital for Children and it felt frustrating. Non-one had told us if it was cancer, and they were using lots of medical terms which I was trying to unravel every time they spoke.

Four days later, Marcus and I were saying goodbye to our son as he was taken down to surgery for a biopsy – we were terrified. When he came back to the ward he was covered in wires and had a port in his head which was the size of a 10p piece. Even though we signed consent forms for Jacob to have the biopsy, we didn’t know what to expect and felt frustrated once again, and we weren’t being told much at all. 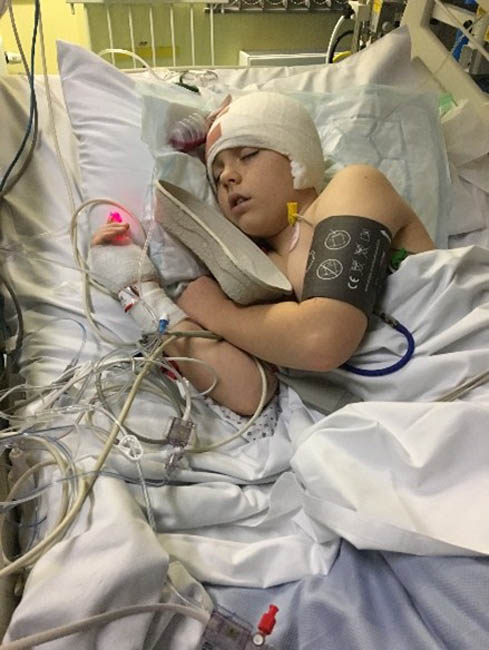 Jacob is a very intelligent young man and throughout this whole experience he has taken everything in his stride.

A sample of the tumour was sent for Whole-Genome-Sequencing (WGS) which at the time was a recent advancement in analysing tumours.

Results showed it was probably a grade1-2 slow-growing tumour and I began to feel more positive – we were getting answers and could work out treatment going forward - Jacob could have a craniotomy to remove the mass and we could get back to our normal lives. 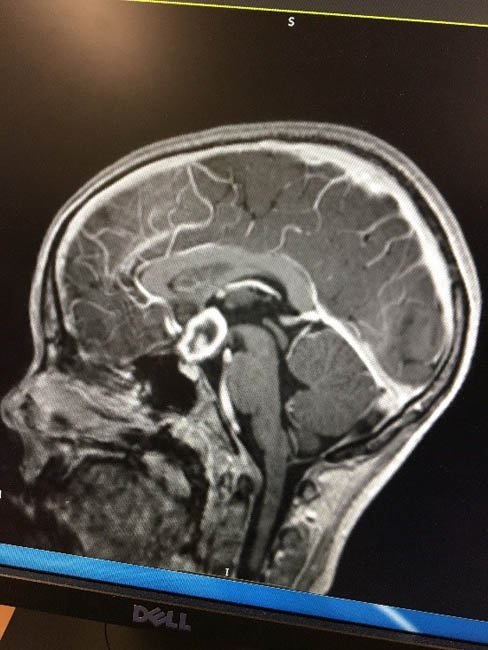 Jacob’s case seemed to stump the surgeons and in January, after nine hours of surgery, his tumour was classified as an optic pathway glioma, that was deemed inoperable due to the fact that it shared a blood vessel with his eyes and removing the mass meant Jacob would go blind.

He had 18 months of chemotherapy which was horrendous. Within the first cycle of  starting treatment, Jacob was vomiting hourly and lost a third of his body weight. He was given platelet transfusions as well as blood and fluid transfusions which became standard procedure with every round of chemo. 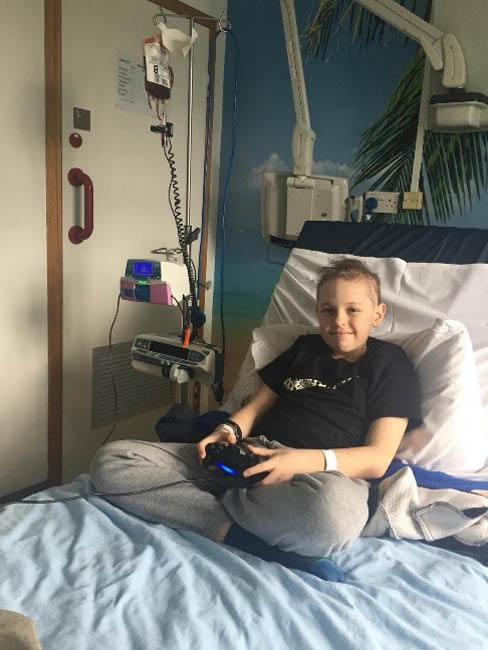 Seeing Jacob go through chemo was horrendous. Marcus searched for answers online; we were desperate for another treatment, one that wouldn’t be so hard on our little boy. From researching online, we found that steroids can help alleviate the harshness of chemo treatment and in Jacob’s case, this worked.

“That really opened my eyes to the limited treatment options that brain tumour patients are faced with.” 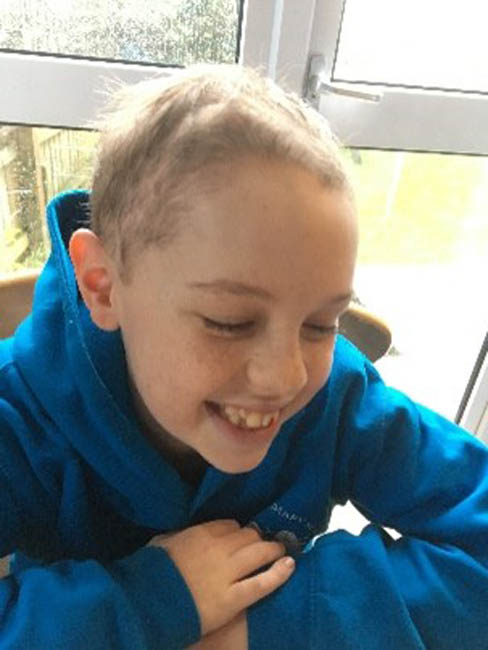 About a year before Jacob was diagnosed, I’d queried his height with the GP, he seemed smaller than children his age, even adults had commented on his size, but as a parent, it’s not something you want to focus on. I now understand that his growth was affected by the brain tumour.

He’s on hormone medication due to endocrine deficiencies as the treatment can impact growth and development, something he is likely be on until his mid-twenties and possibly the rest of his life.

He finished treatment in August 2020 and now has six-monthly scans to monitor the tumour. His last scan showed the tumour was stable. He has quarterly eye tests and is classed as visually impaired. 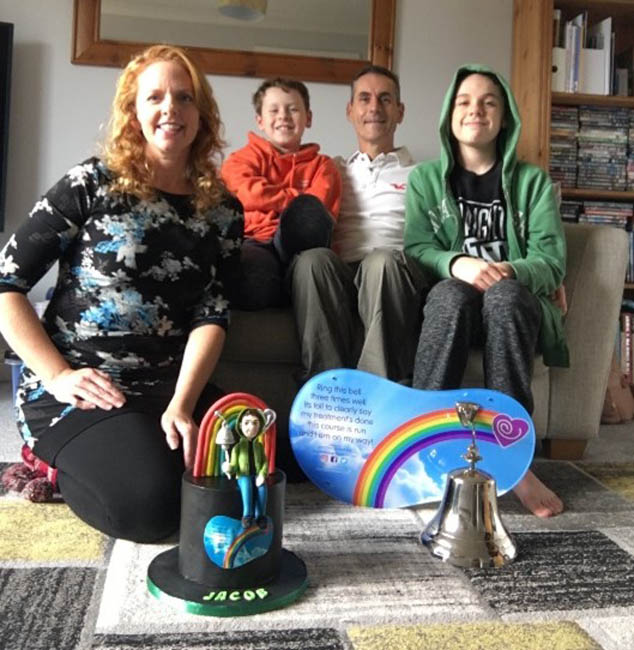 We know the tumour has potential to grow – that’s a scary fact we have to live with and Jacob has already said that he wouldn’t want to go through chemo again.

I had to give up my job as a marketing coordinator when Jacob was diagnosed and now I work part-time as a receptionist at a veterinary practice. I also re-trained as a FitSteps /DanceFit fitness instructor which I believe was a saviour for my mental and physical wellbeing throughout this whole ordeal. 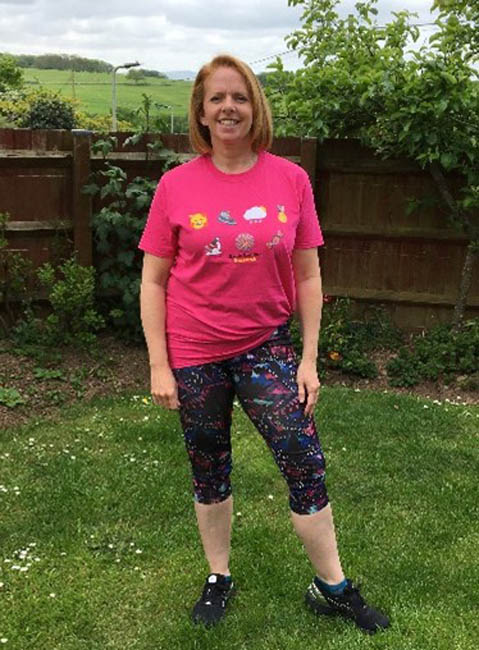 Movement is such an important thing to me and so taking part in Brain Tumour Research’s Jog 26.2 Miles in May Challenge has been a great way to support this whilst also be part of the solution in helping to fund more research in to the disease that we still no so little about. 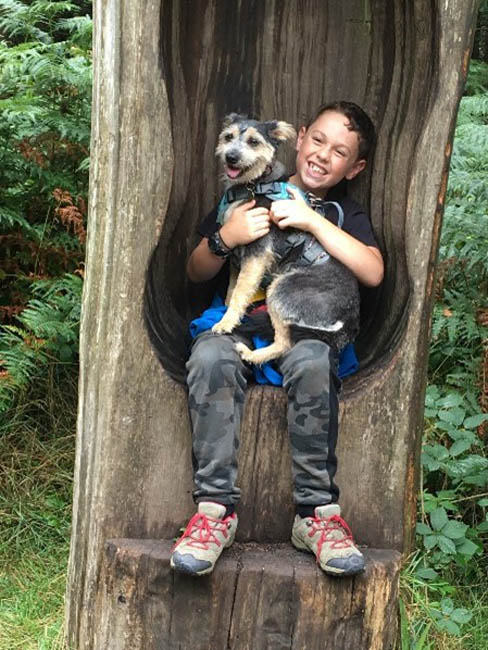