Toddler Ingrid Newman was 15 months old when, in April 2020, she was diagnosed with a brain tumour. Her diagnosis came after she stopped walking, was constantly tired and wouldn’t smile. The brave tot has since had multiple surgeries and chemotherapy, to try to control the disease. When the standard of care chemotherapy seemed to stop working in May 2021, Ingrid went on a clinical trial of a new drug ALK inhibitor drug, usually used to treat lung cancer. Happily, that treatment seems to be working to shrink the tumour and Ingrid, who is about to turn three, is doing well. Her grandparents Fiona and Michael Bond, who run a cattle farm in Cornwall, recently made a donation to Brain Tumour Research, in acknowledgment of the need for greater funding to help secure more clinical trials in this vital area of cancer research.

Ingrid lives in Queensland, Australia, with her mum, who is our daughter, Belle, her dad, Jaxon and two younger brothers, Hector and Ragnar. I grew up in Australia but moved to the UK in 1983 after I met my English husband, Michael, during a skiing trip to Austria. We raised our two children in the UK and I have dual-nationality but Belle moved to Australia in 2012 and has settled and started her own family in a town called Rossville, near Cooktown. We miss her and the grandchildren terribly, especially since visits to Oz have been curtailed during the COVID-19 pandemic. It’s been really tough. 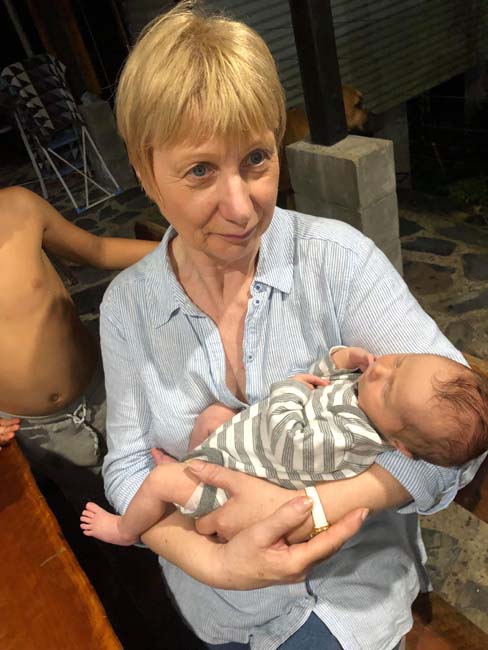 Ingrid is Belle and Jaxon’s oldest child, born on 3 February 2019. She was doing really well and hitting all of her milestones when, in April 2020, at around 15 months old, she became very unhappy. Up to that point, she’d been a very good and happy baby, always smiling and playing nicely. Around the same time, she stopped walking, which was a real concern for her mum and dad.

Belle and Jaxon took Ingrid to a community hospital 30 minutes away in Cooktown. Doctors couldn’t find anything wrong with her blood tests, so sent her to the children’s ward at a larger hospital in Cairns in Far North Queensland, a four-and-a-half-hour drive from their home. They did x-rays of Ingrid’s legs but still couldn’t find anything. Because of the outbreak of COVID-19, Belle, who was pregnant with Hector at the time, had to spend two weeks with Ingrid in an isolation hotel near Cairns Hospital before being allowed to travel home.

“However, on day 10 of being in isolation, Ingrid had a massive seizure. Terrified, Belle rang the hospital and they sent an ambulance to take her straight back to the children’s ward.”

Ingrid’s head was swollen and Belle said she looked so sad. The doctors did a CT scan, which discovered a brain tumour. It was devastating. Belle describes how it felt like all the blood from her body had gone. But with barely any time to digest the news, it was quickly decided that Ingrid would need to be flown to Brisbane Hospital – a three-hour flight away – by the Royal Flying Doctor Service of Australia. The two of them left the next morning but because of the coronavirus risk, Jaxon was unable to join them in the small aircraft, so two of his wonderful friends drove him the 20-hour car journey to Brisbane. A blessing of lockdown was that there was hardly any traffic on the roads, otherwise it may have taken them even longer.

Ingrid was admitted to Brisbane Hospital on 3 May and doctors took her straight for an MRI scan. She had to be anaesthetised for the procedure but luckily, her daddy arrived just before that happened, so she got to see him before she was taken off for the scan. The scan revealed excess fluid on Ingrid’s brain, so a shunt was fitted to drain it, which immediately alleviated the pain she had in her head. 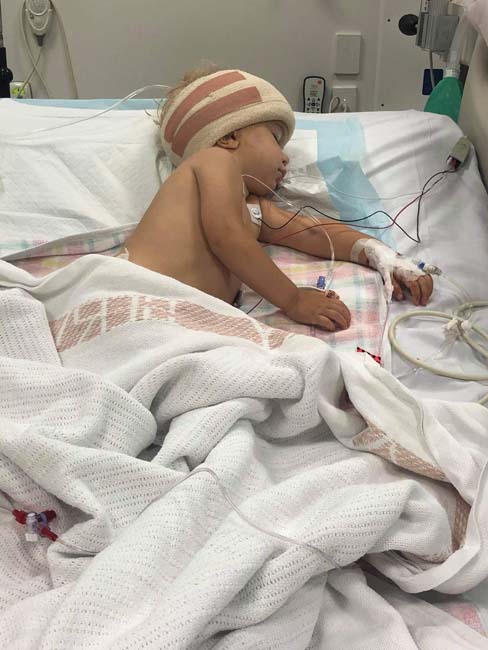 “It would be another week or so until they were told what sort of tumour Ingrid had.”

All the while, from more than 10,000 miles away, Michael and I were being kept informed of what was going on with regular phone calls and text messages. It was horrendous, as I just wanted to be there with them. I’m a retired general practice nurse, which I don’t think helped my anxiety; I felt as if I knew too much. It was so scary. Thankfully, Belle and Jaxon have a great community of very supportive friends, who immediately started fundraising to help support them through this incredibly difficult time. 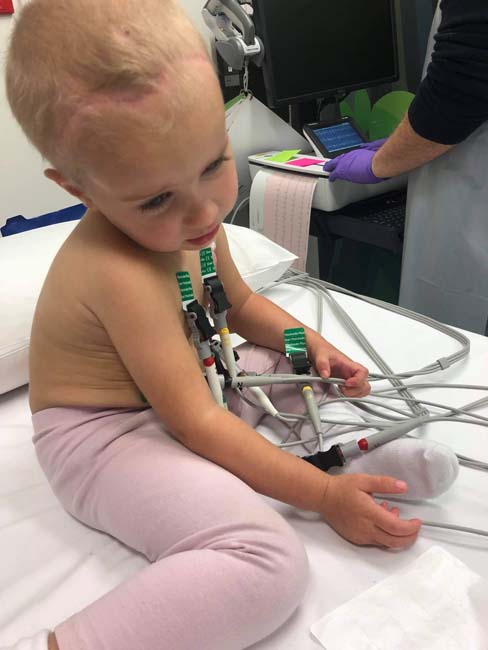 Ingrid had a second brain surgery to take a sample of the tumour for a biopsy and the histology report showed that it was a low-grade hemispheric RTK-driven glioma. Even though it was low-grade, it would need further treatment. Operating to debulk the tumour was deemed too risky, due to its location in Ingrid’s brain. She had a portacath fitted, to allow for the administration of chemotherapy. Ingrid was able to go home but had to fly back down to Brisbane every week – and later every month – to have her chemo. At first, Belle went with her each time but by July, she was too heavily pregnant to fly so Jaxon would go with Ingrid instead. It meant that Jaxon, who is an apprentice electrician, would have to take three days out of work each time he travelled, so their finances were tight too. Michael and I sent money to pay for hotel accommodation across from the hospital – we wanted to do anything we could to help. 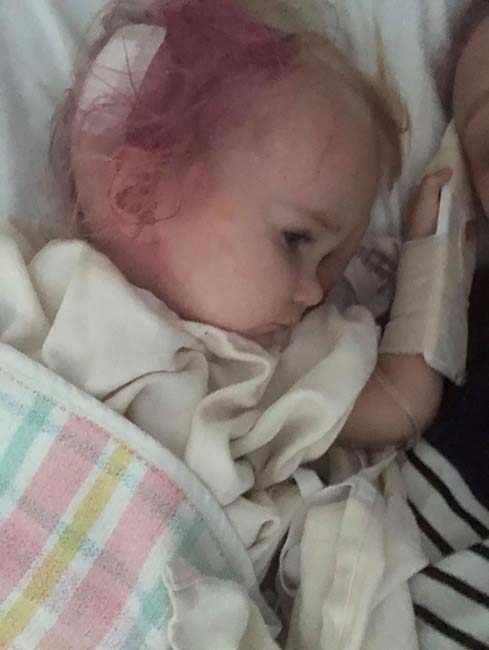 Hector arrived safely in August 2020 and there was more good news when scans showed that Ingrid’s chemo seemed to be working. A scan in October 2020 revealed definite shrinkage of the tumour and the neurosurgeons decided that they would, in fact, operate to try to further reduce the remaining tumour. That operation went ahead on 8 December 2020. They went in through the front of her head, leaving her with a scar going across her scalp from one ear to the other. In spite of their best efforts to remove the tumour, the surgeons were contending with a huge blood vessel going through it and had to abandon the surgery after five hours, due to excess bleeding. She spent 24 hours under close observation in the intensive care unit (ICU) but thankfully, didn’t seem to have suffered any complications during the operation and she recovered well. 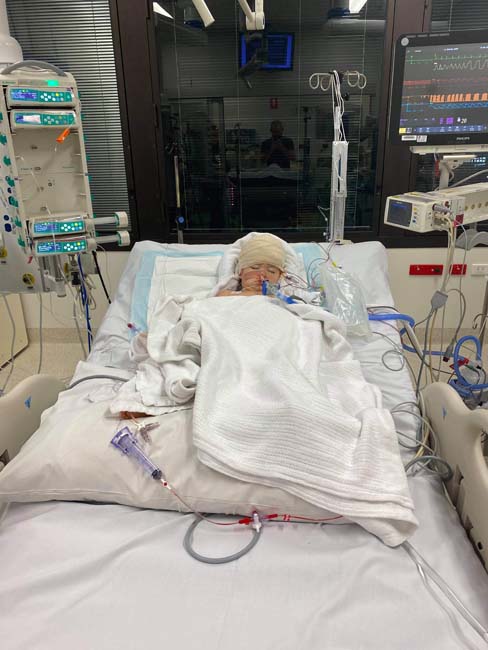 Ingrid continued on the chemotherapy but in March 2021, she had another seizure and ended up back in ICU. It indicated that the treatment may have stopped working and Ingrid’s neuro team began to liaise neurosurgeons and oncologists all over the world, to try to decide what the next steps would be. Her surgeon had done a secondment at Alder Hey Children’s Hospital in Liverpool, where he’d worked with a fantastic team in paediatric neurosurgery. He called upon his colleagues there and elsewhere to discuss the best treatment options for Ingrid. 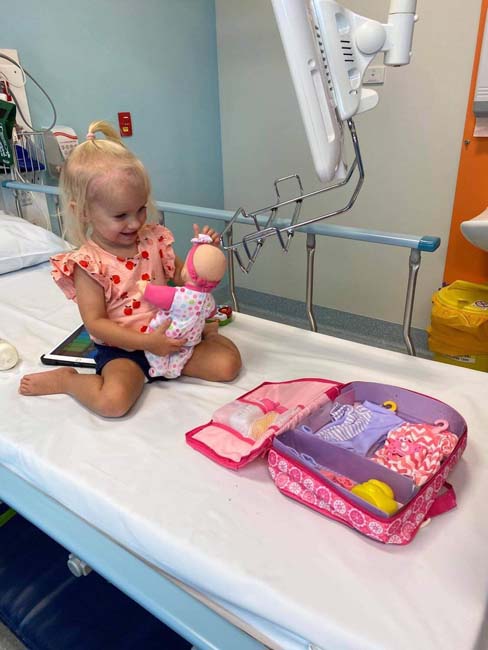 In June 2021, Ingrid had another major craniotomy, this time lasting 10 hours. Her fantastic team managed to remove a good chunk – but not all – of the tumour. They said attempting any more would have been ‘pushing their luck’. She spent three nights in ICU, with doctors monitoring closely whether her memory had been affected. Thankfully, she seemed to have got through surgery relatively unscathed and she went back on the ward, where she stayed to recover for another week or so. However, only a few hours after she was discharged, her scar started to leak and Jaxon took Ingrid back to hospital, where she had another surgery to unblock her shunt.

Following another MRI scan, Ingrid’s team discussed the possibility of putting her on a clinical trial for a new ALK inhibitor chemotherapy drug, which had proven success in treating lung tumours. They explained to Belle and Jaxon that it had never been used on a two-year-old brain tumour patient anywhere in the world but they were optimistic that it would have positive results. Ingrid’s parents felt that they had no choice but to agree to the trial, in a bid to shrink the remainder of the tumour which couldn’t be removed during surgery. The good news was that it was oral medication, which could be taken at home twice a day, rather than having to make regular lengthy trips to the other side of the country.

“Amazingly, after only two cycles of the trial drug, the tumour shrunk by 25%, measuring 3-5mm smaller on her MRI scans.” 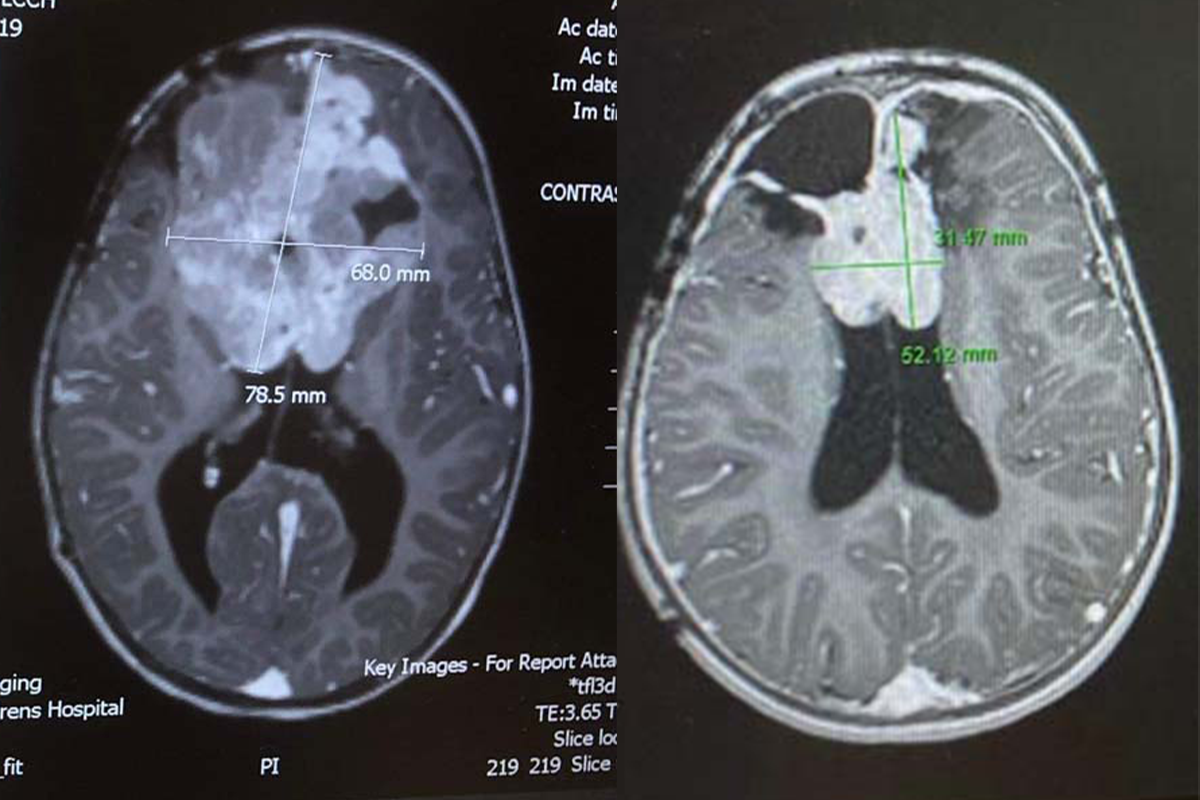 It’s wonderful to see Ingrid doing so well now. Her development was understandably behind after everything she’s been through but her speech has come on leaps and bounds and she’s developing into a lovely, happy-go-lucky character. At the end of September, the family welcomed another baby; little Ragnar, who Ingrid adores. It’s fantastic to see them all thriving after such a tough couple of years. 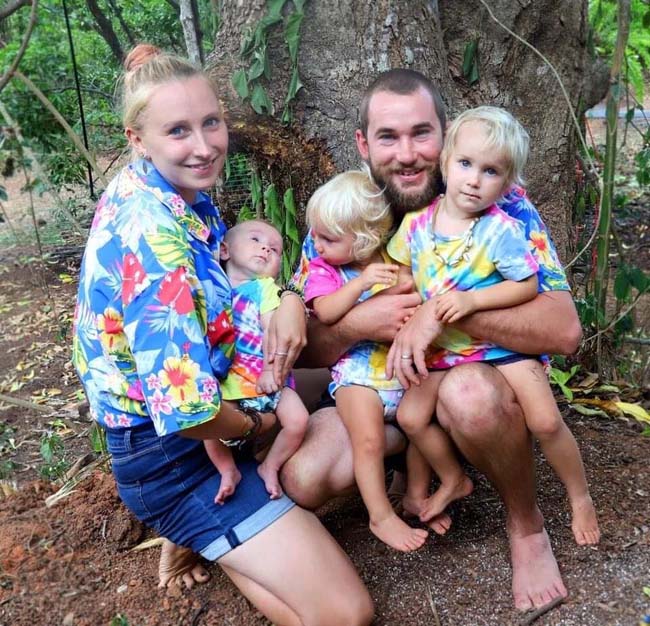 Ingrid is such a little treasure; she doesn’t whinge or kick up a fuss when she’s having her treatment. She gets on well with the nurses and behaves so beautifully; she’s always very popular with the staff on the ward. I’m so proud of her.

I’m well aware that without research, Ingrid’s prognosis could be very different and I’m so grateful that she had the opportunity to go on this clinical trial, which seems to be working wonders. People are very brave to go down the trial route but more trials are desperately needed to try to prevent the devastation brain tumours can cause. I recently made a donation to Brain Tumour Research, as there is a drastic shortage of funding into this area of cancer research. It’s the least I feel I can do to support other families like ours, who have to deal with this terrible disease. I only hope that now the COVID-19 travel restrictions seem to be gradually easing, Michael and I get to visit our wonderful grandchildren again soon. I can’t wait to meet Ragnar and to give them all the biggest hug. It’s been too long. 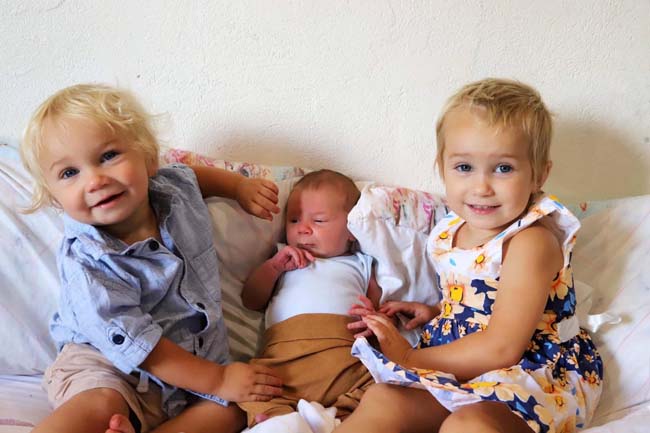 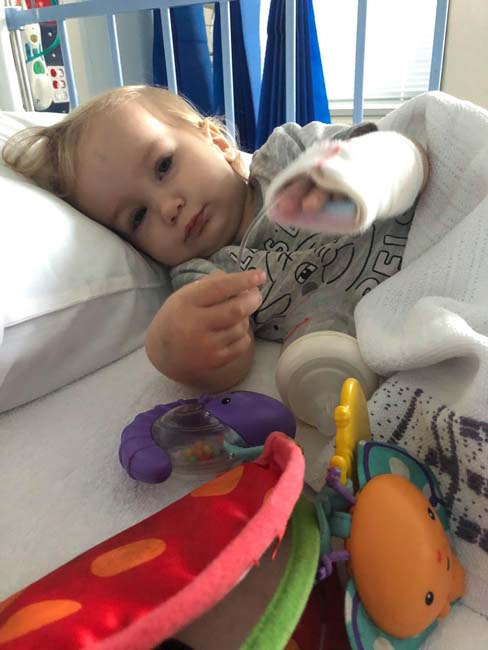