Professional dancer Holly Dooley began experiencing mild seizures whilst on a tour of Russia. Having recently got married and looking forward to starting a family, her world was thrown into turmoil as it became clear from an MRI scan, that the seizures were caused by a tumour on the front right temporal lobe of the brain. Having endured numerous operations and radiotherapy over the last four years, Holly remains determined to stay positive and enjoy her life.

“It was time for my career as a professional dancer to end.  I have achieved some amazing things over the years but having to close the curtain on the job I loved was heart-breaking.”

I got the dance bug when I was five years old after starting ballet, tap and modern dance classes.  I knew from a young age that I wanted to perform so at 18, I auditioned and was offered a scholarship at the prestigious Laine Theatre Arts College in Epsom where I trained professionally for 3 years.

My parents were really supportive over the years and they saw how hard I worked with long hours of training.  They helped in any way they could from making costumes to taking me to performances and exams.

My parents have always been extremely proud of both my brother and I and so happy that we both managed to follow our dreams. I was academic at school which meant that it was a big decision to go down a more creative route but I definitely made the right choice. My brother Leigh is a Planetary Research Scientist who studied at both Cambridge and Oxford Universities and also spent two years as a post doctorate at Jet Propulsion Laboratory in California working for NASA.

I have been so lucky to have travelled all over the world and performed at some amazing venues. In 2009 I achieved my ultimate dream of performing in Grease the Musical at the Piccadilly Theatre in London’s West End for two years.  My career as a dancer has been amazing and I have such wonderful memories of this special time.

Sean and I got married in August 2013, surrounded by our friends and family, it was a magical day. Life was going well and we were thinking about starting a family, until our life was turned upside down.

Whilst on a tour of Russia in October 2013, I began to feel unwell and was experiencing mild seizures. They were strange episodes that I described as “funny turns”. A week later I was back home in Leighton Buzzard with Sean but I was still not feeling myself.  I went straight to the GP on my return as I knew that something wasn’t quite right.  I saw a junior doctor who was a little unsure of what to do and how to advise me, so she consulted with a senior colleague.  She called later to explain that she was referring me to a neurologist.  At Luton & Dunstable Hospital I was booked in for an immediate MRI scan.  It was a very worrying time for Sean and I but we tried to remain positive.

The consultant confirmed what they had initially suspected, that it was indeed a growth on my brain. I was referred to the National Hospital for Neurology and Neurosurgery in Queens Square, London, to see a specialist.  The news was a complete shock and it was a very difficult time for all of our family.

After further investigation the team in London told me that I had a small low-grade brain tumour on my front right temporal lobe and explained that they wanted to operate to remove it. This was the first time the word “brain tumour” had been used and it was pretty terrifying.  It was also the first time I had ever been in hospital for any procedure - let alone brain surgery! It was a difficult Christmas, I’m a December baby (hence the name Holly), but that year I really didn’t feel like celebrating my 30th Birthday, which was on 27th December.

My operation was scheduled for January 2014.  It was a huge relief when I woke up after the surgery. The day after the operation I was walking around the ward and beginning my recovery.  The operation had been successful, but the pathology results would confirm the exact tumour diagnosis.

We received more worrying news at the follow up appointment, which was that the tumour was not the low-grade Meningioma as expected, but was in fact a grade three anaplastic ependymoma.  This is a rare and aggressive type of tumour, that was likely to regrow so an intense course of radiotherapy was the next step in treatment.

So, every day for 6 weeks, I travelled into London for treatment accompanied by either my husband or parents.  The treatment left me feeling exhausted and I also had some hair loss.  It was tough to see it falling out but I was grateful that it was mostly underneath and at the back of my head. My aunt had recommended Christos Hair Design in Newport Pagnell who specialise in wigs and hairpieces, so I started to look at wigs in case I needed to have one. My friends joked that I could try something new, like a different colour or style but at this difficult time all I wanted was to “look like me” and find something as close to my own hair as possible.  People often say that losing your hair is insignificant in the scheme of everything, but it feels like you are losing part of your identity.  It was tough to see my hair falling out but I was grateful that it was mainly the underneath section so I was able to have special extensions which really gave me my confidence back.

I understood that it was likely that the tumour could return and I knew that my career as a professional dancer was over. I had achieved some amazing things over the years, but having to close the curtain on the job I loved, was heart-breaking.

Later that year, I began training to be a fitness and pilates instructor and I am now very grateful to find another job that I enjoy. After my operations and treatment, I find that my short-term memory is not what it was.

I am very open about my condition and many of my regular clients know about my tumour and are not surprised if I sometimes forget their name! I take medication to control the seizures and remain focused on getting back to some sort of routine in my life.

In July 2016 a scan showed that the tumour had come back. I knew this was a possibility but it was still a bit of a shock after having two years of clear scans. I had another complete resection and recovered well.

In January 2017, I was told that the tumour had grown back again for a second time. I had more surgery in February and was doing well with my recovery initially.  After being discharged from hospital I went on to have a CSF Leak and a Full Convulsive Seizure.  Luckily my family were with me at the time.  After an emergency hospital admission, I was transferred to London. After an MRI scan, they said they could see the tumour was growing again! My surgeon called in another expert to work alongside him and they operated straight away. It was another extremely invasive procedure that lasted 8 hours. The recovery from this operation was difficult. I suffered from a brain slump, which is when the fluid leaks out of the dura, and the overall volume and pressure of fluid within the skull drops.

A brain slump can have different effects on the body from severe pain, blurred vision, eye pain, neck pain, hearing impairment, spasms, seizures and a wide range of other symptoms. After almost a week of being unresponsive, I had surgery to remove the bone flap to release pressure and another operation to fit a titanium plate to protect my brain.

In June this year I underwent Gamma Knife surgery to treat any remaining cells. My most recent scan revealed that the remaining piece of tumour had changed slightly, but wasn’t growing which is a positive sign.

Looking back, there were no warning signs that I had a brain tumour. You hear stories of people suffering from headaches, blurred vision, slurred speech and memory loss, but I didn’t experience any of these and my seizures started suddenly.

I don’t know what the future holds, but who does? However, I remain positive and always remember that I’m very fortunate to have an incredible family, who love me and have been holding my hand throughout all of it. 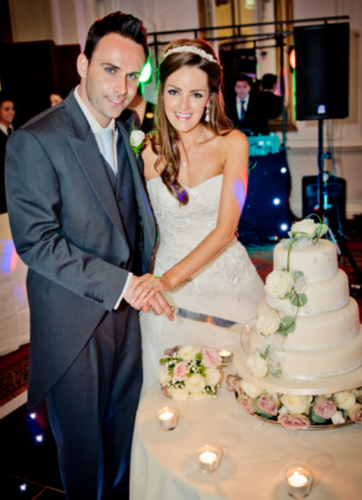