Heather was 24 when she was diagnosed with an acoustic neuroma, a low-grade brain tumour which caused partial hearing loss. The only treatment option was surgery but complications caused nerve damage leading to life-long difficulties including facial palsy and the loss of sight in one eye.

“It took me ten years to recover from the damage caused by surgery to remove my brain tumour. There have been times when I’ve wondered if life was still worth living. Although I have lost count of the number of operations I have had to make me look ‘normal’, I now feel as if the worst thing that ever happened to me has changed my life for the better.”
I seized the chance to do a sponsored abseil down a waterfall to raise money for Brain Tumour Research – although I had never done anything like it before and was terrified, it was just the sort of thing my mum would have done. Sadly, she passed away from leukaemia. She had kept the diagnosis to herself and delayed treatment because, at the time, she was nursing me back to health after surgery for a brain tumour.

My mum was always young at heart. She was only 59 when she died in 1999 and I will always remember her zest and motivation to live and enjoy life. She supported me after my diagnosis and continued to do so through my long and difficult recovery.

I was just 24 when I started having symptoms which eventually led to my diagnosis. It became clear that I had lost the hearing in my right ear and, at first it was put down to congestion and a cold. I went back to the doctor a number of times before I saw an ENT specialist who referred me to Derriford Hospital in Plymouth for an MRI scan. It was “just a hunch,” he said but he had noticed my poor balance as I walked in and wanted things to be thoroughly checked.

When you’re young you never think anything bad is going to happen to you and I was pretty relaxed about the situation. When the results came through I was called in to see the consultant who said he was very sorry but I had “a shadow” on my brain. I had an acoustic neuroma, a type of low-grade brain tumour, which had grown to 4.5cm behind my ear. It was pear-shaped and growing into my ear canal.

My operation took place on 10th September 1996 at the Royal Free Hospital in London. I had been told I would recover from the surgery in a couple of weeks but the reality was very different.

There were complications in theatre and mum was warned that I might not make it. I was in intensive care and unconscious for two weeks. I can recall much of what was taking place around me but couldn’t signal to my friends or family. They were in such distress and I just wanted to show them in some way that I was going to be alright.
I was left with permanent palsy on one side of my face after the nerve was cut during the operation. To begin with, I was unable to walk and couldn’t eat. I had to relearn the things that most of us take for granted each day. My weight plummeted to a dangerously low four-and-a-half stones.

It was November before I left the hospital and that’s when I began to realise just how much things had changed. My life was devastated. I used to love walking and sailing and I also played the saxophone but I can’t even blow a whistle now. One of the most hurtful things was the way in which people treated me.

My lop-sided face and problems with balance led many people to assume that I was drunk. If I went out, people would shout out at me and there would be stares of shock and horror. Some people would ask: “What’s wrong with you?”

I needed a strategy and so I got a dog! I wasn’t supposed to go out on my own as there was a patch of skin on my head around the size of a 50p piece with no skull underneath. I was married at the time and my husband was out at work leaving me isolated and lonely at home during the day.

My saviour came in the shape of a timid little Staffordshire bull terrier called Cracker. He came from a rehoming centre and it was as if we were giving each other a new life. People who didn’t like the breed would leave me alone while those who liked dogs had a reason to talk to me. He gave me the confidence to get out and was strong enough to pull me along a little when I struggled with my balance. I am now on my fourth rescue dog but Cracker will always be my favourite.

I lost my mum three years after the operation to remove the tumour. She had kept her leukaemia diagnosis to herself for around a year. I have so much to be grateful to her for. She was the one who was always at my side and gave me the emotional strength to keep going. At least I was able to help look after her at the end, anticipating her needs to help make her as comfortable as possible.

My husband and I had grown apart and become different people. We went our separate ways and sold our house. I moved to a little bungalow in Brixham, Devon, which I love. It was semi-derelict and over the years, I have knocked down walls and redecorated. The garden was a jungle but now it’s my pride and joy even though it was extremely hard work, including the 12 hours I spent wheelbarrowing three tonnes of gravel through the house to get things how I wanted.

I walk my dog along the seafront and really appreciate the beauty of nature. My experience has taught me that it is the simple things in life which really matter. Although I have travelled a long road, I have found peace. People tell me how brave I am but I don’t feel it, I am just living my life and trying to enjoy it.

It took me ten years to recover from the damage caused by the surgery and there were times when I wondered if life was still worth living. Although I have lost count of the number of operations I have had to make me look ‘normal’ – including one to close my permanently-open right eye - I now feel as if the worst thing that ever happened to me has changed my life for the better. 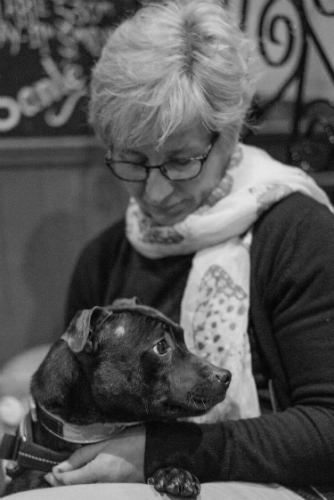