Schoolboy Gruff Crowther was diagnosed with a brain tumour after minor but repeated difficulties with his eyesight. At the age of seven, he was the youngest patient to attend a reception at Speaker’s House, Westminster, in March 2016 when he joined the charity Brain Tumour Research in calling for more funding for the devastating disease.

“We have been very open with Gruff right from the start, telling him right from day one that he has a tumour and that means a lump of badly behaved cells which are reproducing incorrectly. He is aware that there are different types of brain tumour and different types of cancer. While Gruff’s tumour is low-grade we mustn’t been fooled into thinking that means it is benign – we are aware that the rate of growth can accelerate and things can become problematic. Left untreated, Gruff’s tumour would definitely have caused more problems as it spread. So far, his scans have shown the tumour has reduced in size and, for now, things are looking positive.”

We first noticed Gruff had a problem with his sight as he took the first steps towards learning to read. He would hold books really close to his face and sit as close to the TV as he possibly could. We didn’t really think much of it other than that it was the behaviour of a normal little boy. When he started part-time at primary school at the age of three his teacher also picked up on this as she noticed he was having problems distinguishing shapes and colours. We booked an eye test but everything was fine and remained so through a follow-up appointment and then a third opinion confirming there was nothing to worry about.

Here in Wales, children have a mandatory check up with a school nurse at the age of five and it was at that point we were told Gruff was being referred to Abergele Eye Hospital because his sight was not satisfactory. There were ophthalmology tests which showed everything appeared fine but because there was obviously some distortion in Gruff’s sight, we were referred for a scan. The consultant referred us to our local hospital, Glan Clwyd, as the waiting time was shorter than at Alder Hey, Liverpool. My sister-in-law was a medic and, although she didn’t say so at the time, when she heard Gruff was going for an MRI scan she was concerned it was something serious.

Throughout the previous appointments and check-ups, we had accepted all that we had been told as a reasonable explanation. I suppose though that there was some niggling doubt in my mind and in some ways it was good to think we were on the path to getting to the bottom of things and sorting it out. I had expected it to be a month or so before the results of the MRI came through and so was shocked to get a call within a couple of hours of it taking place. We were called back to the eye hospital where the consultant said: “There is no easy way to tell you this, your son has a brain tumour.”

The team at Alder Hey had already been informed. It was September 2014 and, just a few days later, Gruff was started on an 18-month course of chemotherapy. His tumour, an optic pathway glioma, was inoperable because of its location. It had already caused damage to Gruff’s sight but it was hoped the treatment would shrink the tumour to prevent further damage. There was even a possibility that the deficit in his vision might be restored, at least partially. There was cause for optimism, the tumour was low-grade and slow-growing. Our consultant had been involved in a pan-European study of this tumour type and we felt we were in safe hands.

The therapy would be given in three stages. To start with, we travelled to Alder Hey which is about 90 minutes’ drive from our home near Conwy, North Wales. Gruff was on two types of drug, Carboplatin, which makes him very sick for the first few weeks, and Vincristine which causes pains in his arms and legs. The first phase lasted for ten weeks and by 25th March we were onto phase two which meant drugs every three weeks in a six week cycle. Gruff is now on the final phase which, all being well, will finish on 19th April.

As Gruff is relatively young and the treatment has been going on for so long, for him at least, it has become routine and part of our “new normal”. Although his brain tumour diagnosis and treatment is such a big part of our lives at the moment I hope that when Gruff is older he will look back on his childhood and this period won’t seem too traumatic. There have been very difficult times, but we hope that the amazing things that have happened to him, such as recording his song and having it played on national radio, will be what he remembers. His treatment regime which, along with the chemo in Liverpool, has included regular blood transfusions, admissions, and tests at Glan Clwyd Hospital, has become the status quo. The care we’ve received at both hospitals has been excellent but the care at Glan Clwyd has been so wonderful that having spent so much time there it feels like a second home! In a way, I suppose that is a good thing as it means we can almost not think about our son having a brain tumour.

Of course Gruff’s treatment and diagnosis continues to have a significant impact on our lives and there have been many anxious times for all including his older sister Anna. Both children were coping with upheaval in their lives before the diagnosis as our local school was closed and they were in the process of moving elsewhere. This was a particularly difficult time, during which we were really grateful for the support of our family and friends, who have been wonderful all the way through.

We have tried to keep things as normal as possible. Gruff has missed around five of every 15 days at school, Ysgol Twm o’r Nant, but he has carried on like a trooper whenever he can. His mum Ruth continues to work as a teacher and I have gone from full- to part-time study for my PhD in education so that I can be here to look after Gruff and get him to all his appointments.

All being well, Gruff’s last chemo session will be mid-April and a scan scheduled for the following month will show how successful the treatment has been. Our biggest hope is that it will show the tumour has significantly shrunk again, but even if this is the case scans will continue every six months for the following two years and then annually. We have been told that if there is no change to the tumour over five years then there is a very strong chance that it won’t regrow and we hope that the steps we are taking are small but significant as we travel along that path to the “all clear”.

We have been very open with Gruff right from the start, telling him right from day one that he has a tumour and that means a lump of badly behaved cells which are reproducing incorrectly. He is aware that there are different types of brain tumour and different types of cancer. While Gruff’s tumour is low-grade we mustn’t be fooled into thinking that means it is benign – we are aware that the rate of growth can accelerate and things can become problematic. Left untreated, Gruff’s tumour would definitely have caused more problems as it spread. So far, his scans have shown the tumour was reduced in size and, for now, things are looking positive.

The Gruff we knew before treatment was affected by his loss of sight and we don’t yet know how things will be once he has finished the chemo. Certainly whilst on the chemo he has been prone to infections, had some challenging behaviour at times and experienced extreme mood swings, brought on by some of his medication. While an adult would find it relatively easy to express their frustrations and feelings, and how exhausted they are, Gruff sometimes finds this difficult. Despite this he has remained very stoical and rarely complains. There have been times when he’s felt very poorly, but he has an incredible spirit and even in the tough times still comes out with hilarious comments. In many ways he’s helped to keep us going!

Gruff is very musical. He has started to play the tuba and has written and recorded a song in Welsh about his experiences. As well as loving all things musical, he wants to be an inventor and is currently working on a time machine. 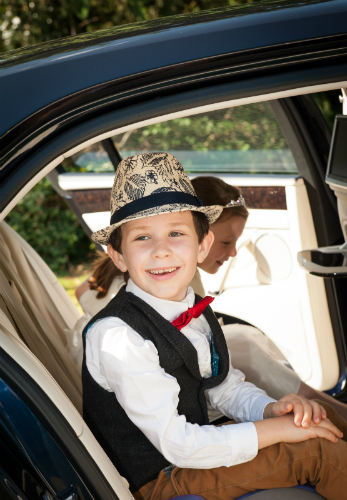