Father-of-two Greg Priddy was diagnosed with a brain tumour in November 2020. On Christmas Eve he found out it was cancerous and on New Year’s Eve he received the shocking news he had an inoperable primary brain CNS lymphoma (PCNSL). In January 2021 he started undergoing chemotherapy, although his start date was delayed due to the COVID-19 crisis, and then at the beginning of July he had a stem cell transplant followed by an anxious wait to find out if his treatment had worked. In April 2022 the 46-year-old celebrated having been in remission for six months.

Greg’s symptoms first started in October 2020 but, of course, we didn’t know what was wrong with him at the time, he just started behaving oddly and doing stupid things. I’d get up to find he had turned all the lights on in the house or this one time I woke up at 5am to find the front door open and thought that we’d been burgled. He’s a business account manager and I found out later that he was writing emails to customers that didn’t make any sense – they had letters missing or missing words.

“I did start to get worried because it was totally out of character but the kids and I were questioning whether it was us – you do start to doubt yourself.” 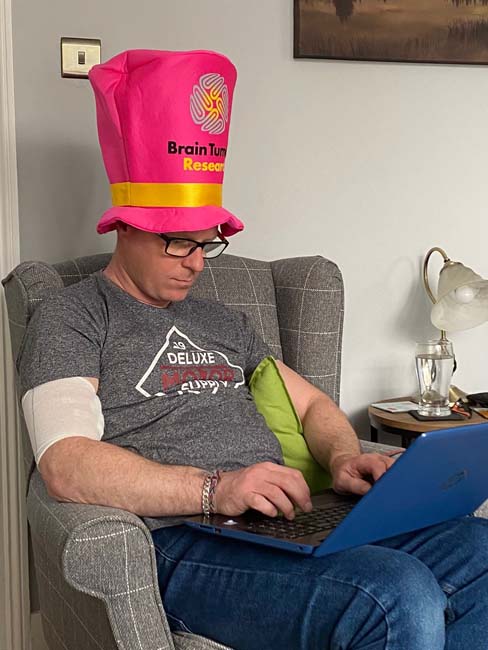 In late November, Greg had to collect some eye-glasses near where we live in Staines-upon-Thames, Surrey, and he asked if I wanted to go with him but I was knackered so chose to stay at home. When he got back, he looked funny, almost as if he had had a stroke – it was like he had a sudden weakness in the whole left-hand side of his body.

I dropped him at St Peter’s Hospital, in Chertsey, and came back home because the kids were finishing school and I didn’t want them to panic if we weren’t there. Greg was evaluated and told he hadn’t had a stroke so was going to be sent for an MRI but then another consultant said he didn’t need one and sent him home. We weren’t happy with that so I managed to find the contact details for the department of Greg’s neurologist, who he had seen before when he had optic neuritis, a condition that has damaged the nerves in his right eye, leaving him with partial vision. They arranged an appointment for him a few days later.

“In the few days that he was home his condition deteriorated quickly.”

Two things stand out most from that time, when he told us he was going to clean the kitchen and started wiping the sides with the base of the kettle as if he thought it was a cloth and when he forgot he needed to use oven gloves and took a tray of sausage rolls out of the oven with his bare hands. He’d obviously hurt himself quite badly and I remember seeing him look at his hands, confused, unable to understand why they were in so much pain.

“That’s when I told the kids what had happened and said they had to help keep a real close eye on him.” 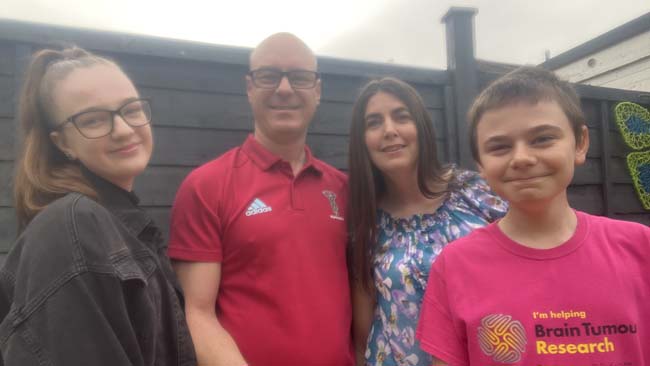 A couple of days before he was due to see his neurologist, he was asked to go for an MRI scan. The weakness in his legs was so bad that he fell out of the car and I had to pick him up and put him back in. We honestly thought it was just a routine scan, I was expecting to collect him an hour later but when he rang at about 8pm he said he had to go to A&E. I thought he was joking, because that’s what he’s like, but he said ‘no, seriously, I have to go to A&E’.

I was upset and I cried but I was also angry because I didn’t see why I had to be told over the phone. He was in the waiting room for a few hours before he was admitted and COVID-19 protocols meant I wasn’t allowed to see him. His phone battery died overnight too so I literally had no contact with him – it was really tough.

“By that point his brain had gone totally gaga and he couldn’t make sense of anything, he didn’t even know where he was.”

By the following morning he was talking absolute rubbish to me and not making any sense at all. They put him on really strong IV steroids which took the pressure off his brain and that brought him back round – he knew where he was, what was going on, he knew everything. Then he was sent home to wait for a phone call from St George’s Hospital in Tooting, where he was being sent for a brain biopsy. 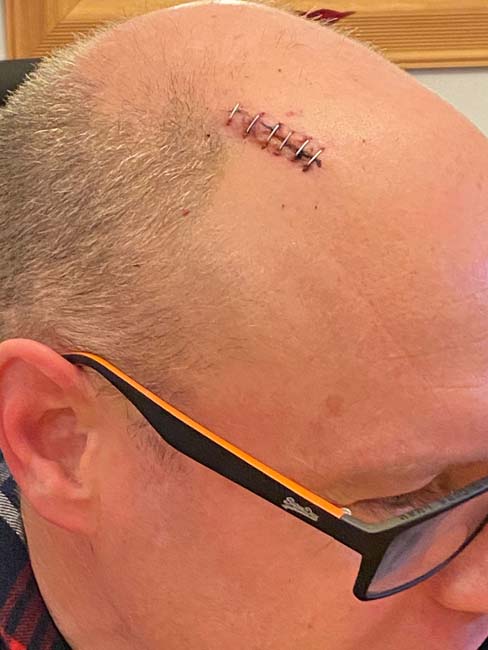 Greg’s biopsy was the first operation he had ever had. They rang when he was in recovery and said because they had been into his brain, they needed to make sure his memory was ok and that he knew who I was.

“That was gut-wrenching, I don’t know what I would have done if he didn’t remember me – thankfully he did.”

He was sent home by ambulance and on Christmas Eve a nurse from St George’s rang with the news that Greg had a cancerous tumour and was being moved to another hospital, St Luke’s in Guildford, for care. On New Year’s Eve we were asked to go in for a chat and that’s when we found out it was a rare tumour, a PCNSL, which, due to its location, couldn’t be removed by surgery.

The neurologist said he only sees about 10 of these types of tumours a year and that Greg’s had gone straight to the brain, which is very unusual. The type of tumour he has travels through the blood and usually goes somewhere else in the body first but that didn’t happen in Greg’s case. No one can say why.

They were brilliant at St Luke’s; we knew exactly what was happening and when we sat the kids down we told them ‘this is what it is and this is what’s going to happen’. William was upset but then he’s quite sensitive, and he’s younger, whereas Amelia is very practical and said ‘right, we’ve got to fix this’. 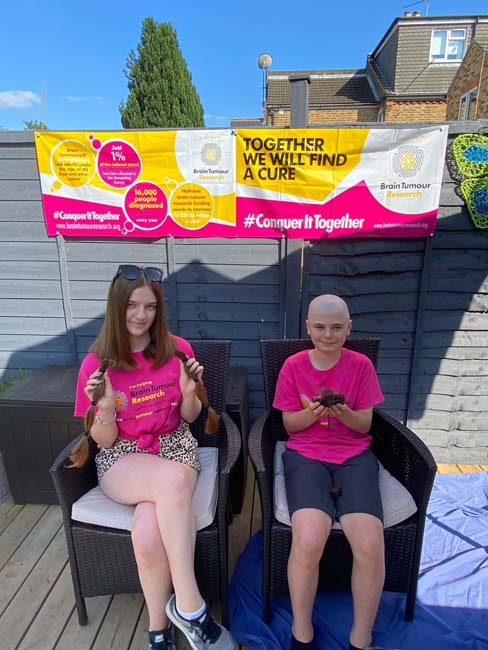 After that they both threw themselves into fundraising for Brain Tumour Research and I think it was really good for them to find their way of helping. William launched a year-long mile a day running challenge in January 2021, he ran the equivalent of four marathons in May, braved a shave in June, then did a half marathon and the ‘London Marathon’ – surrounded by props of iconic landmarks that I made – in October, all in our back garden. Amelia took part in the charity’s 20 for 20 challenge, which finished in December and saw her choreograph and perform 20 different dances over 20 days. Their commitment has certainly kept us all busy and, thanks to everyone’s huge support and generosity, has raised more than £14,000 for the charity. It hasn’t ended there either. I took part in this year’s 10,000 Steps a Day in February challenge and William is continuing to run. 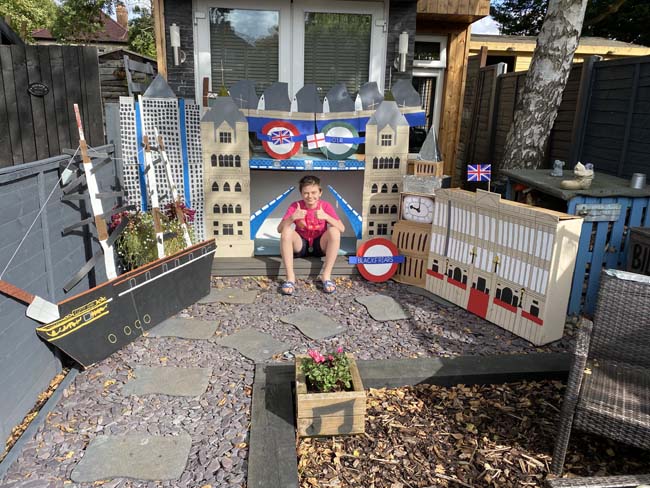 Greg started MATRIX chemotherapy in January 2021. It was intense and involved him staying in hospital for seven days straight, then he’d have three weeks off before starting another dose, then three or four weeks off and then another dose. With one of them I only had 40 minutes to get him to the hospital before they thought his body would shut down because he didn’t tell me until late that he wasn’t feeling well.

He missed William’s 13th birthday on the second dose and that was a real low point. One of the consultants thought he might have been well enough to come to the reception area of the hospital, which is closed on the weekends, but he wasn’t. The kids thought they were going to be able to see their dad and have some cake but Greg was too weak and could have got an infection so I told him to stay where he was. 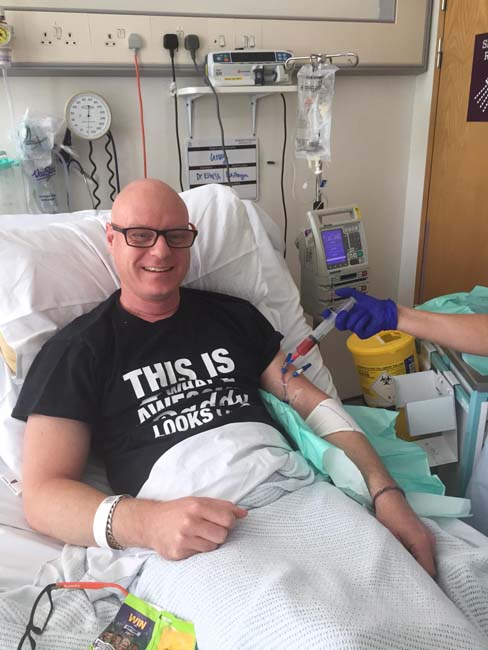 He had a total of three doses before having a stem cell transplant at the beginning of July. The transplant was awful because the chemo they give you wipes out your bone marrow and Greg got sick as a dog. The way they explained it to me was that his baby stems were taken out of his blood, then frozen while he went into hospital for the chemo and then he was given his baby stems back, which are supposed to fix you. 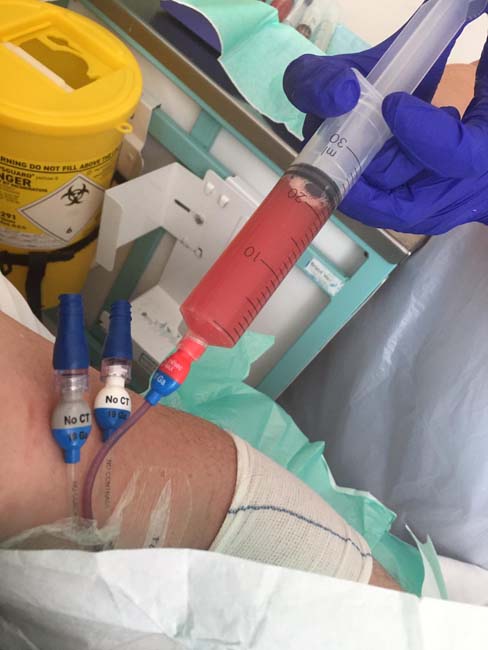 “It doesn’t always work but we’re waiting to find out if it has, which would mean he is in remission.”

It was an agonising wait because we didn’t find out until 11 October. I’m usually the bravest person, I just go with the flow, but I spent that time not knowing what to do with myself. In some ways the time went quick but it also dragged because I just wanted to know what was what. 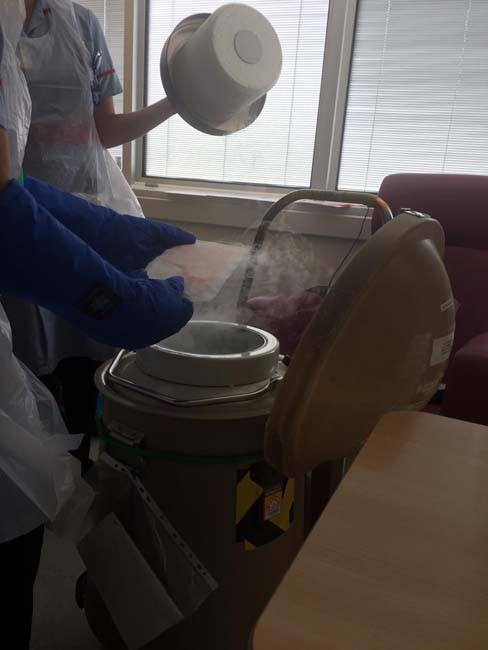 When we found out he was in remission, we were over the moon, but we still didn’t know how much longer we would need to shield because the next wave of COVID hit and we were told we needed to keep being cautious. Greg’s immune system was so low that we knew he would have a long road to recovery and the rest of us needed to continue shielding to protect him. Our children, now 13 and 16, hadn’t been able to go to school and were having to do all their school work at home. They were as good as gold throughout everything, though, we really couldn’t have asked for better children. 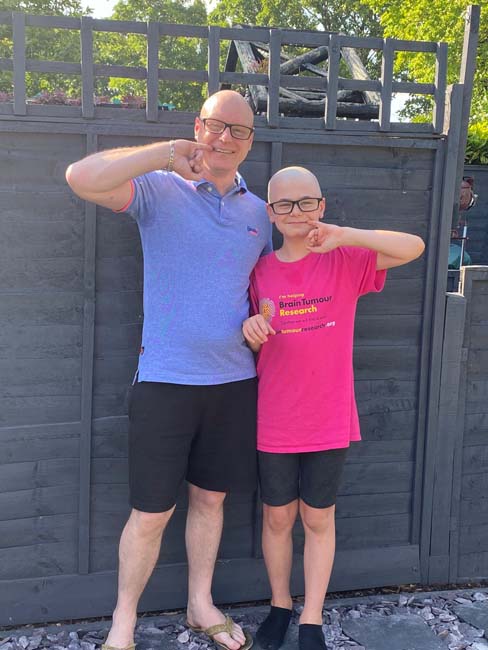 Greg started working again, from home, just three hours three days a week as part of a phased return but it was good for him to be able to talk to other people. In January we were allowed to start going for socially-distanced walks because he’d developed some antibodies from his first COVID-19 vaccine, but we had to go early morning when fewer people were around to limit the risk of infection for Greg. I was so excited I practically danced out of the house.

The kids returned to school in February but they still have to be careful. They wear masks, even though the other children don’t; they leave lessons five minutes earlier to avoid crowds; they’re not able to take part in contact sports or socialise like their schoolfriends and they have to take regular lateral flow tests, but after shielding for as long as we did, it feels like a lot of freedom. I’m due to go back to work later this month and it feels like things are starting to get back to normal. We’ve also just celebrated six months of Greg being in remission so the future is looking promising. 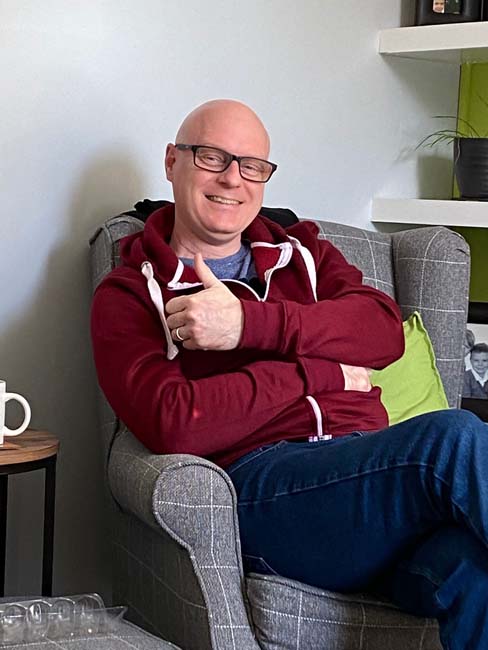