Father-of-four Garreth Williams was diagnosed with a grade 4 glioblastoma (GBM) in May 2022 after suffering with headaches and transient left-sided weakness, initially attributed to high blood pressure. He was finally sent for tests after falling over at work. The 50-year-old, of Harefield in London, recently finished five weeks of combination radiotherapy and chemotherapy and has since been treated for blood clots in both lungs. He is now receiving care at home, which has been converted using money donated via a crowdfunding page, set up to ease the financial burden on his family and to reunite him with his family from overseas.

Here is Gary’s story, as told by his cousin Brian…

Gary was born in what used to be known as Rhodesia (now Zimbabwe) in 1972 and I first met him in 2003 when I was dating his cousin, Karen, whom I subsequently married. He’s a highly-qualified electrician but used to work as a nightclub bouncer in the evenings, and he also played a lot of rugby. He’s a huge chap at over 6ft 3in and weighs over 100kg (16st), all of which is muscle and should give you an idea of his size and stature. He is, however, a lovely gentleman who is happy to go out of his way to help others. 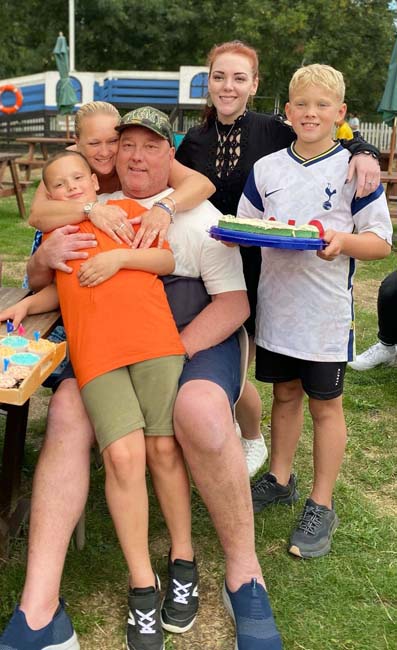 “His dad passed away on 30 April and it was exactly a month later that Gary was diagnosed with a brain tumour.”

He’d been having headaches and was experiencing some transient left-sided weakness but these were attributed to him having high blood pressure. He’s the type of guy who always thinks he’s fine and doesn’t go to the doctor but his wife Carrie insisted that he got these symptoms checked out. When he finally did, he was immediately referred for tests at Hillingdon Hospital in West London, which ultimately led to his shock diagnosis on 30 May. Carrie and Gary are both eternally grateful to Dr Nasir-Shaik at The Harefield Practice for her fast-thinking and urgent referrals. 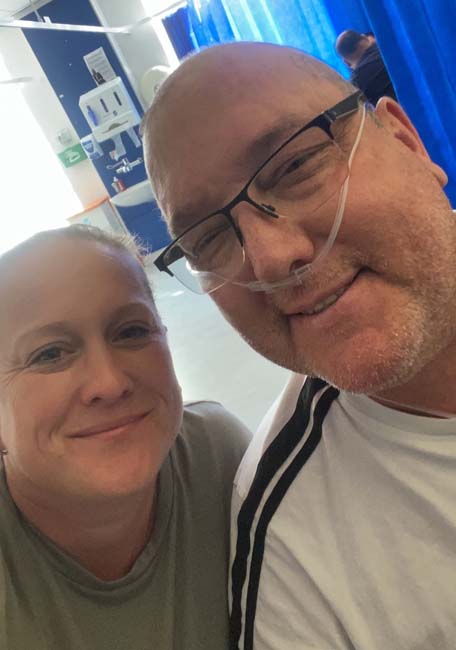 “Unfortunately, Gary’s tumour is inoperable because of how deep it is positioned in the right-hand side of his brain.”

He was, however, referred to Charing Cross Hospital where surgeons were able to do a biopsy, which is how they confirmed it as a grade 4 glioblastoma (GBM). Gary has now undergone six weeks of combined radiotherapy and chemotherapy, which finished just a few weeks ago, and was doing fairly well until last week when he was hospitalised with a bilateral pulmonary embolism, meaning that he had blood clots in both lungs. He’s doing OK at the moment; he’s not confined to the house and is mobile but we do have to be careful because he has no feeling in the left-hand side of his body. He fell trying to get into the house last week, and again the other morning when he tried to go to the toilet without using his walker, so he’s clearly unstable on his feet. 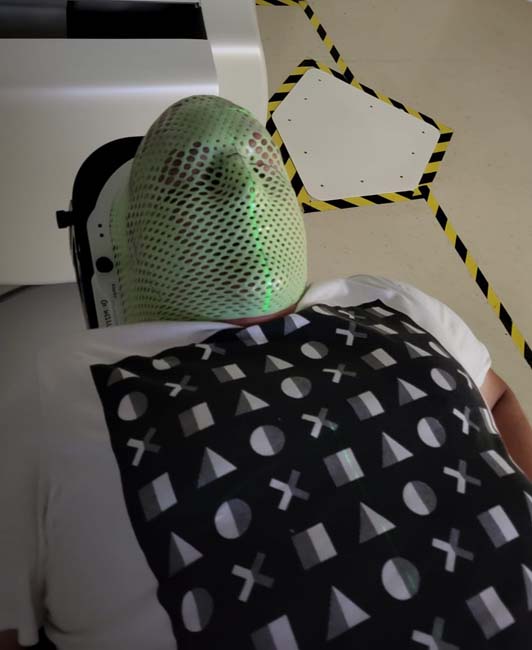 He has a lovely three-bedroom detached house in Harefield, London, which, thankfully, is large enough that he and Carrie have been able to turn one of their ground-floor rooms into a shower and toilet, and get a hospital bed and recliner into a nearby room. He’s now completely safe on that floor and doesn’t need to go upstairs for anything. He’s put on a lot of weight because of the steroids he’s taking and suffers from fatigue which makes him want to sleep a lot, but having everything in close proximity means that he can get to whatever he needs using his walker.

“It’s not been easy though, and Carrie, understandably, is taking it very hard.”

Gary seems alright around other people but when he’s at home he can become quite agitated. Instead of being able to sit down and explain things, he tends to snap, and although we know it’s not Gary and is probably due to his condition, that doesn’t make it any easier. 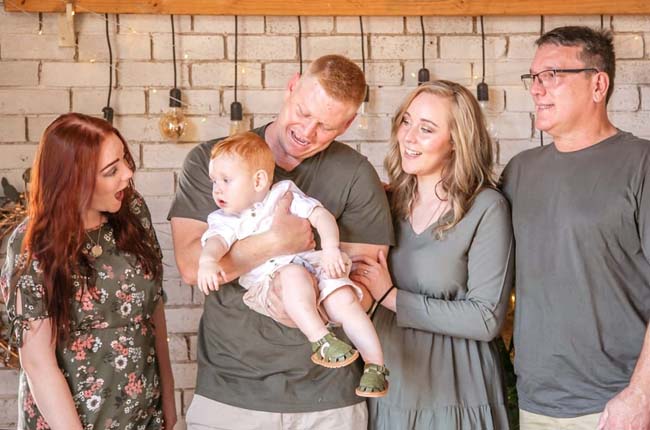 Gary and Carrie have two young boys who live with them, Kian, eight, and Kynan,10, but Gary also has two daughters and a grandson who live in South Africa. His youngest daughter, Kayla, 23, has already been out to see him, whilst his oldest daughter, Carmen, 27, is currently visiting. In December, they plan to return with the whole family, including Gary’s two-year-old grandson Luke and sister Bridgette, from America, which should be a lovely occasion. 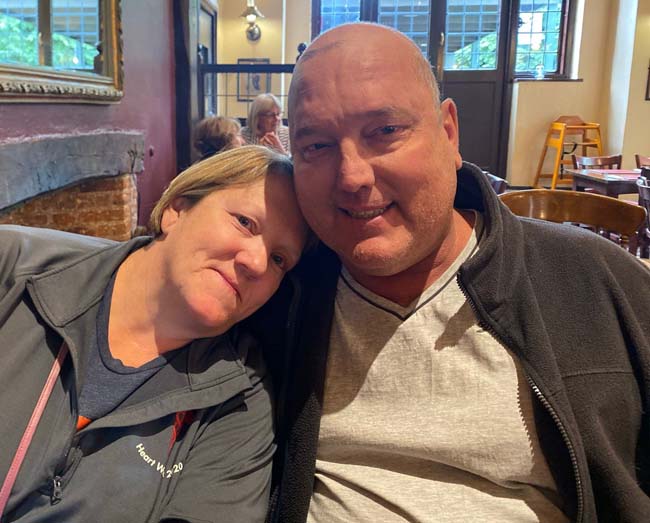 “This is the reason I set up a GoFundMe page, which Gary was very upset about initially.”

He displays a lot of strength of character so wasn’t happy about it at first, but he’s now accepted it and, like us, has been very surprised by the way it’s taken off. The money that’s been donated so far has helped pay for the house alterations that were urgently needed to provide his care, and we’re hoping it will be enough to reunite him with his family at Christmas and provide his family with financial assistance at a time when Gary, who was the main breadwinner, is unable to work. I had hoped it would do well but people’s generosity has taken us all by surprise; I just hope it continues and we can give Gary a Christmas to remember. To donate, please visit www.gofundme.com/f/williams-family-vs-stage-iv-glioblastoma. 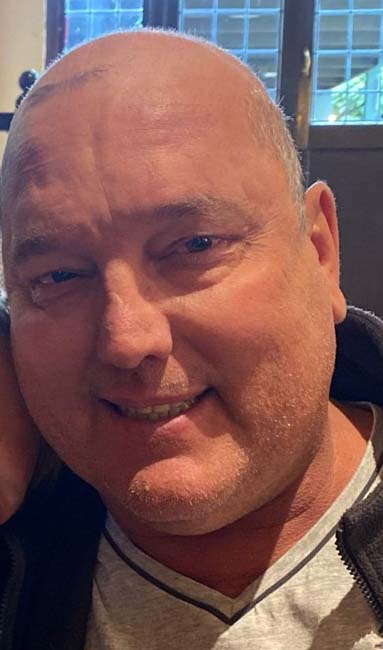