Denise Fincham, 39, a stay-at-home mum from Eastchurch on the Isle of Sheppey in Kent, was diagnosed with three meningiomas in May 2020 after suffering from debilitating headaches and sudden vomiting. She underwent surgery to remove the largest of her tumours but suffered a bleed on her brain and a stroke, resulting in paralysis from below her neck. She was put on ‘suicide watch’ after claiming she no longer wanted to live and endured months of rehabilitation after which she was told it was unlikely she would ever walk again. After continued hard work, she began walking with aids and, after a set-back caused by a fall which necessitated a full hip replacement, Denise is now undertaking a fundraising challenge that will see her walk a half marathon distance in her home throughout the month of March.

My symptoms started in March 2020 during the first lockdown. I was getting such bad headaches that I literally couldn’t sit up and needed to lie down all the time. The only thing that helped was taking really strong paracetamol but as soon as they wore off, I had to lie down again. I became worried and decided I needed to go to the doctor but, because it was during lockdown, my husband Michael wasn’t able to go with me. I was referred to a neurologist and prescribed strong painkillers, which I stopped taking after becoming violently sick. When it got to the point where I couldn’t even keep water down and was screaming in pain whilst throwing up, I told Michael we were going to have to call an ambulance.

After the paramedics arrived, they checked me over and said they were going to take me to the Medway Maritime Hospital in Gillingham, Kent, ‘just to be sure’. After waiting about three hours, and bearing in mind it was already midnight by the time we called the ambulance, I got impatient and said I needed to lie down because my head hurt so badly.

“That’s when I was told they wanted to keep me in because of suspected meningitis.” 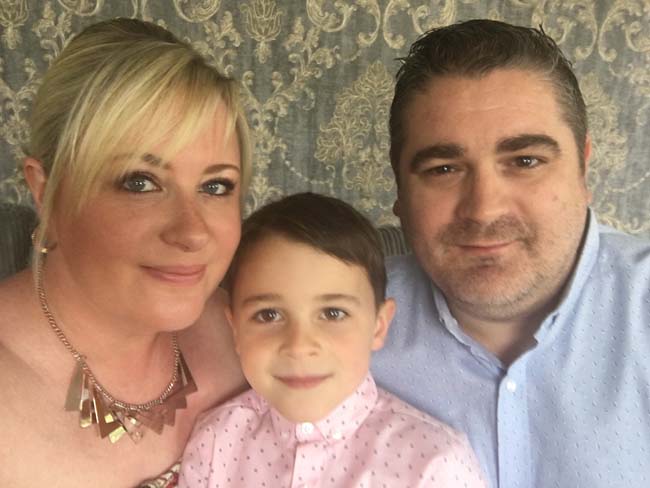 I was sent for an X-ray and then a CT scan, after which I was told they had found three meningiomas. One of them was particularly big and was pushing on my brain, which was causing swelling and the pain and sickness I was experiencing. I later remembered that five years earlier a fairly large lump had appeared on my head and I was referred for a ultrasound scan after which I was told no further investigation was needed.

“It wasn’t until after diagnosis that I found out the lump was caused by one of my tumours pushing my skull up.” 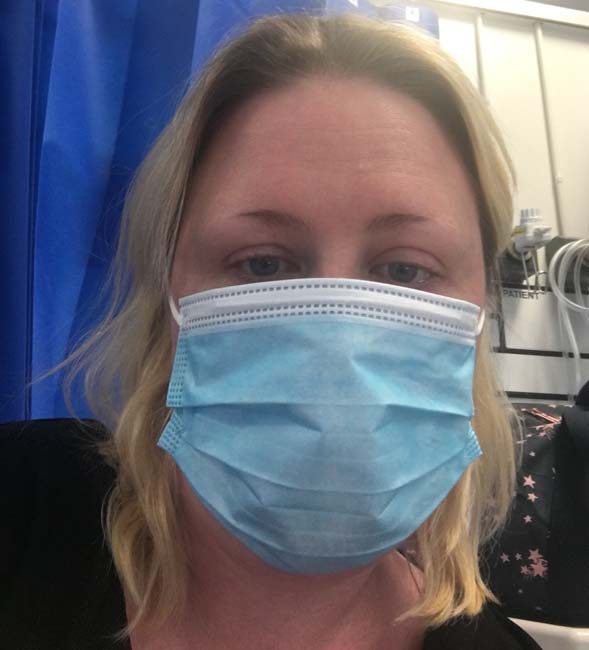 “Initially I was told my brain tumours were cancerous.”

I spent a week in hospital having various scans and they even put me on a cancer ward whilst I was there. It wasn’t until my care was transferred and I received a call from King’s College Hospital, London, a week after I was discharged that I was told my three tumours were, in fact, low-grade. I was massively relieved but pretty upset I’d been alone in hospital when I was incorrectly told I had cancer. All they’d done was close the curtains around me, which meant that all the other patients could still hear what was being said. Michael had had cancer three years earlier and I knew what he’d been through so it was a shock to hear that I also had it. I had to compose myself and then phone to tell him I had brain tumours and they were cancerous. He didn’t really know what to say. What can you say to somebody over the phone in that situation? It’s so hard when you’re not face-to-face and able to hug it out. 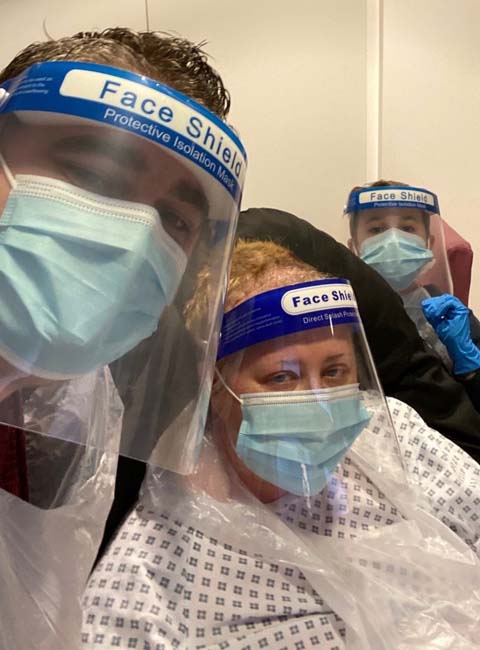 I went home eight days later after being told to wait and see what happens whilst continuing to take steroids to reduce the swelling caused by my tumours, but in June 2020 I had a suspected transient ischemic attack (TIA), which is like a mini stroke. All the left-hand side of my body went numb and my hand formed a claw, which lasted about 20-30 minutes. We phoned 111 and they sent an ambulance which took me back to the Medway where they did an MRI. It was because of the TIA that the surgeons at King’s decided to operate on the largest of my tumours and scheduled me to have surgery in November. Seeing a picture of it the night before my op scared the hell out of me because it was enormous and I’d never had surgery before so I was scared about being put under anaesthetic. 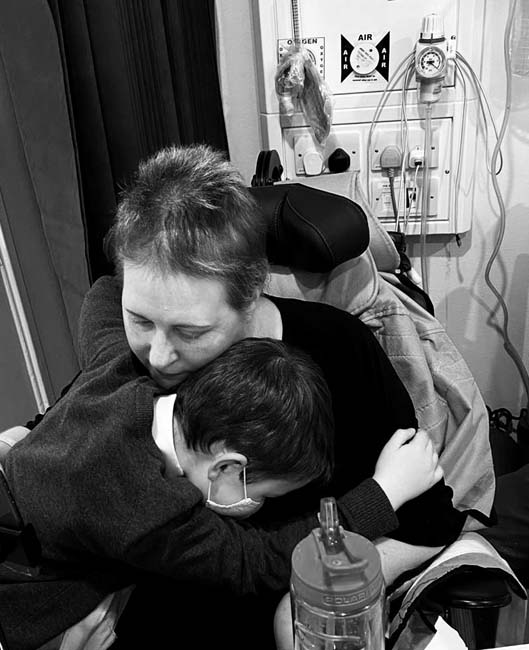 “They had to take a hole out of my skull and replace it with a titanium plate because my tumour was so large.”

I got out of surgery and managed to call Michael to tell him I was ok but that I had some weakness down my right-hand side. He didn’t hear anything from me for a week after that, when I called to tell him I’d had a stroke and was paralysed from the neck down. I don’t know if I was hallucinating or if it was real but I remember waking up and feeling like my legs were in some kind of contraption and screaming for it to be taken off because it hurt. I also remember laying there in the pitch black unable to move my body but not understanding why. As for the rest of my memories, I’ve been told that your brain cuts out traumatic events to help you cope with them so I assume that’s what happened because I only remember bits and pieces. Most of it’s a blur, although I do recall the people I met in hospital and their stories, and I’ve kept in touch with some of them.

Within a week I got a bit of movement back in my right-hand side but on my left I still had no feeling below the neck. I spent six and a half weeks at King’s College waiting to be transferred to a rehab centre and then got moved to Orpington Hospital, where they have one, just before Christmas.

“I was there until mid-April 2021 and didn’t see my son, James, for a three-month period and, being a stay-at-home mum, that broke my heart.” 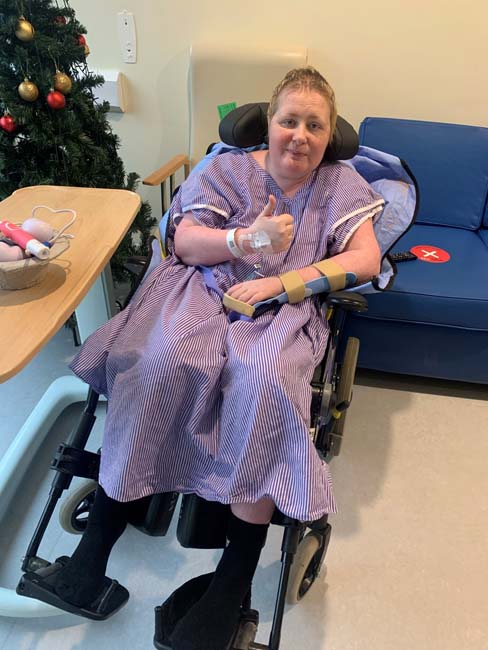 “I was put on ‘suicide watch’ and given one-to-one care because I told everyone I wanted to kill myself.”

I feel really bad about putting Michael through that because it’s not that I didn’t want to live, mostly I didn’t want to be a burden on him. I know if the shoe was on the other foot, I’d do the same but I’m so grateful for him. I also couldn’t cry, which was such a weird feeling. I desperately wanted to have that release but physically I couldn’t do it, I guess because of my brain injury. I made up for it when I was in rehab, though. I literally cried all the time because I felt so frustrated and couldn’t do anything about it which made me increasingly agitated. The concentration of trying to talk to someone was too much at times too and there were days when I just had to hang up on Michael. 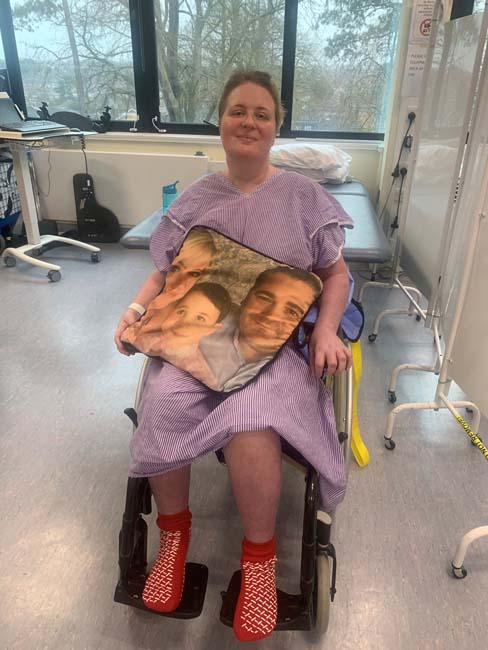 “There wasn’t much improvement during my time in the rehab centre.”

I was meant to go home in March 2021 but I caught COVID-19 whilst there which delayed everything. It spread like wild fire around the ward and I was quite sick with it and started having seizures. By the time I went home in April, I could clench my left fist and open my fingers up but I couldn’t hold my left arm up and I wasn’t able to move my leg on that side at all. I was told I would probably never walk again and, although I accepted what they told me, I never accepted that was how my life was going to be. I just couldn’t see myself being in a wheelchair for the rest of my life. 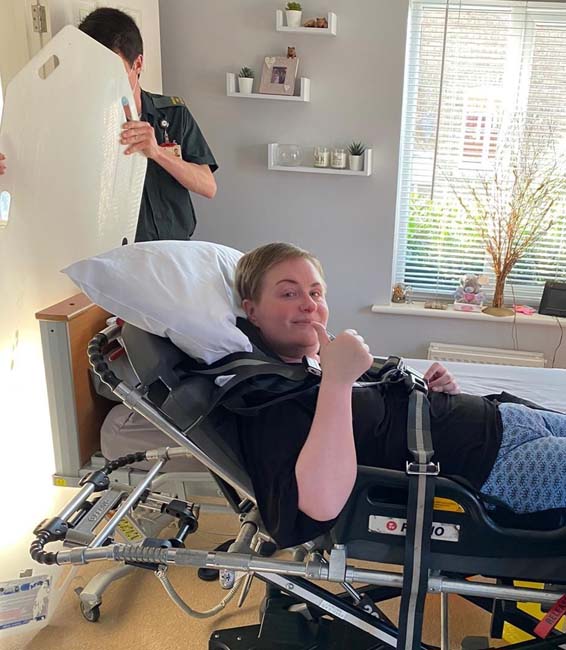 “I had a hospital bed delivered to my house so that I could sleep in the living room and I had a hoist to move me to the commode and to my wheelchair.”

I had a really good physio and those sessions as well as those with my occupational therapist enabled me to start moving myself. Being able to transfer myself to the commode was such a huge step forward for me because it was such a degrading thing needing help to get on and off the bed pan. I got progressively better and finally started being able to take small steps with a walker. I’m now working on transferring to walking sticks. 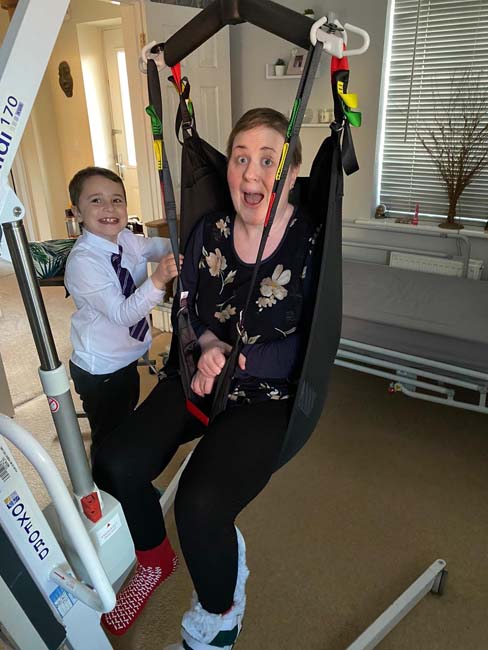 “Unfortunately, in October last year I had an accident which set back my recovery.”

I fell and hurt my side and had to have a full hip replacement. I went back into hospital for another week-and-a-half and had to learn to walk again when I came out. I’m just about back to where I was before the fall, although I’ve lost a lot of confidence so have had to work hard on that. 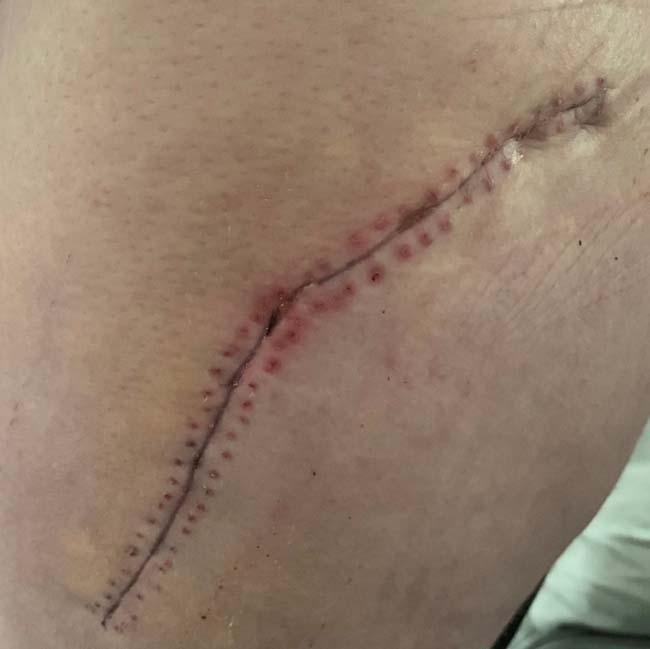 “I’ve now set myself a fundraising challenge of walking 13.1 miles around my house throughout the month of March for Brain Tumour Research.” 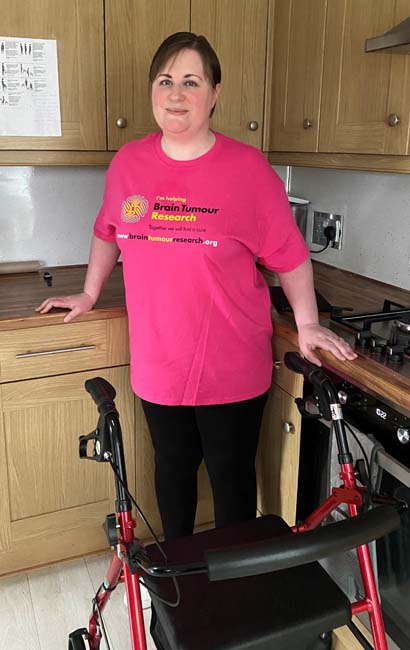 I originally wanted to complete a full marathon distance but after trying to do the steps I needed, I was so tired that I had a seizure and had to re-evaluate what was possible. My physio said it was probably a good idea not to push myself so hard and suggested a half marathon because the more I do the stronger I will become. I’d really like to push to raise £1,000 for the charity.

My family is proud of me for what I’ve achieved, especially as none of us thought I’d come as far as this. Michael is amazing. He works full time, does all the washing and cleaning, walks the dog, looks after our nine-year-old son and, on top of that, he looks after me; he’s been under so much pressure. People say to me that I’m an inspiration but I take my inspiration from my husband of 12 years because what I’ve had to go through is nothing compared to what he has.

“My friend told me I should buy a lottery ticket because I’m due some good luck but I feel like the luckiest person alive because, not only am I alive, but I’ve got my two boys who are absolutely amazing.”

I’ve got an MRI scheduled later this month to see what my other two tumours are doing. At my last scan they were stable so unless they start growing or causing me to have symptoms, they will be left with continued monitoring every six months. In the meantime, I know I’ll continue to have the support of Michael, and of my friends and family; without them I don’t know where I’d be. 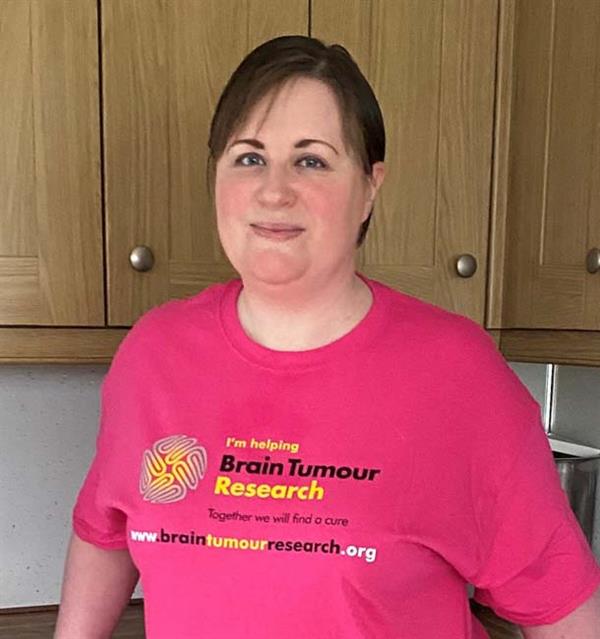