David was 28 when he was diagnosed with a brain tumour, having already recovered from Hodgkins Lymphoma.  As his mother, I have really felt the utter helplessness of the situation and now want to do something to help others if I can.
In 2004 we were all celebrating the news that David and his partner, Amanda, were expecting a baby, when only a month later, he was diagnosed with Hodgkin’s Lymphoma (cancer of the lymphatic system).  He had surgery to remove the affected lymph nodes and underwent chemotherapy, as well as radiotherapy, and thankfully he recovered fully.

During the latter half of 2007 and during 2008, David complained often of being tired and sleepy.  We knew he was busy at work and, obviously, having a new baby in the family was exhausting, but as soon as he sat down he would fall asleep. David and Amanda’s relationship struggled through this difficult time and sadly, they split up. In June 2008, David was two months away from being discharged from the Lymphoma Clinic, and we were celebrating.  However, cancer was to strike a second time.  The story of his brain tumour diagnosis is, sadly, a sorry but not uncommon tale.

His tiredness had become such a problem that in the July he went back to the GP and had blood tests, but these came back fine.   Mid August, David called me on the phone and he was very upset.   He said he was so tired of feeling so ill and that he had been vomiting a lot.  The doctor had prescribed sickness pills, but these did not help.  We took him to an outpatients emergency appointment at the hospital, where he vomited ‘coffee grounds’ blood during the consultation, and was then admitted to hospital.  He underwent extensive investigations over the next five days and was discharged with a diagnosis of gastritis and given medication for this.

A week later, David vomited constantly for 18 hours and was re-admitted into hospital.  After 24 hours, they discharged him, giving him more of the same medication, but as we left the hospital building, he vomited into the bushes in the hospital car park.    I refused to take him home and we went back to the ward from which he had just been discharged, but were told we had to take him to A&E.  After five hours or so of waiting in A and E, during which time he continued to vomit, they said he would be re-admitted.  I left him there, saying I would come up the next day. Later that evening he called me saying that they had discharged him, telling him that ‘they had no beds and there were people sicker than he was’.  I was furious and disappointed but collected him; he said that they had given him a prescription for sickness medication, but the pharmacy was closed.  So I brought him home, empty handed, and he continued to vomit all through the night.

The next day, a Thursday, we managed to get him an emergency appointment at a local private hospital and after explaining David’s symptoms, the doctor looked into David’s eyes and he told us that he could see that the optic nerves were swollen – a sign of pressure in the brain.   He arranged for David to have immediate CT and MRI scans which showed that he had a brain tumour.   When we were given the news we were so shocked.  Nobody at the previous hospital had looked into his eyes – and there must have been at least nine different doctors who had examined David. I impressed on all of them that David had a previous history of cancer and we had asked them all to be very thorough.

I was appalled, shocked, dismayed, frightened, disappointed, horrified…so many emotions. Although I had begun to think there was something seriously wrong, I had not expected this.  My world seemed to stop turning and I just thought “Oh God, not cancer again.”  My husband and I were devastated.  David was very quiet…I think by this time, he did not care what happened as he was just feeling so very ill.

My next reaction was absolute fury and an overwhelming need to talk to the professionals involved and let them know that they just had to learn from this.  You can’t keep treating people with medication for the same problem if it is patently not working. I suppose this reaction was some kind of self-defence mechanism on my part, but it gave me an energy that helped me get through the next few days.

Then we joined this new scary world of brain tumours. We discovered that David’s type of tumour was a rare tumour in adults, an ependymoma grade II, and that it hadn’t spread to the spine as ependymomas can do, which was fortunate.  He was given steroids over the weekend to reduce the pressure in his brain before the operation, which had been scheduled for the following Monday.

Even though he must have been terrified, David made plans in case there were complications with his operation.   His ex-partner, Amanda, had, by this time, married and David said that if anything happened he would like her new husband to adopt his little boy, Andrew.  Also, he made it known that if he ended up in a vegetative state, he wanted the life-support machine to be switched off and he would like his body to be used for research.  He was so brave.

The surgery took five hours, although we had been told to expect two to three.  We were told that 95% of the tumour had been removed, but the rest could not be touched as it was attached to his brain stem.

When David came round he couldn’t see properly and couldn’t move.  He had no idea of where his body was in space and thought he was lying face down even though he was lying on his back.  We found out later that his balance, coordination and vision were permanently affected.   He recovered enough to be taken to the ward but then he contracted bacterial meningitis and at this point, I was even more frightened – we again thought we were going to lose him.

He spent five weeks in hospital and they were telling us that David would need to go to rehab, but would have to wait for a bed, which would be about three weeks.  Then suddenly he was discharged, with one day’s notice, and was sent home with no follow-up visits from nurses.  The rehab never happened. It felt like he and we, as his carers, had just been abandoned and left to get on with it – although our GP was very supportive.  There were appointments at the hospital, but they only dealt with the tumour and surgery itself, and not with all of the residual effects, the constipation problems because of his medication, and the dramatic changes to our lives.  We had to fight to get a district nurse to come out to help him.  I feel that there should be some sort of outreach programme to help people after being discharged – someone to help with the ‘whole person and family’ issues.  In the November David underwent six and a half weeks of radiotherapy.  The radiotherapy caused so many more problems, and although they had warned him of side effects, I don’t think any of us were prepared for the extent of them.

David has since done very well although he had, and still has, issues with eating, having vomited for so long.   His balance is compromised, he still has vision coordination issues, and he needs a walking stick.  David is back working at Ikea, part time, and has a less demanding job than previously but the company has been fantastic and extremely supportive.   For a year, my husband and I were driving him to and from work as he could not do the journey by public transport.   We then discovered, completely by accident, ‘Access to Work’ an agency set up to help people in his circumstance and they now provide him with transport. Without this, he would have had to give up his job, but I wish that someone could have told us that at the beginning. It seems that you have to stumble around and find everything out the hard way which, when you are already struggling to manage, is not at all helpful.

I think it is work and his little boy, Andrew, now 10, which have kept David going - he still suffers with extreme fatigue and continues to live with us, needing our help and support.  It is now six years since his surgery and he is now on yearly scans.

We made a formal complaint to the hospital about their failure, on several occasions, to diagnose David’s brain tumour and they did acknowledge that mistakes were made and said that the case would be used in two separate training programmes for doctors.  I am glad there was a positive outcome and I want to spread the word to all doctors everywhere, be they specialists or GPs, to understand the importance of looking in their patients’ eyes.  It is also important also for the general public to be aware that persistent vomiting can be a symptom of a brain tumour, and that it is not necessarily a gastric problem, and to ask for their eyes to be checked, or see an optician regularly.

I have huge concerns about the ‘post code’ lottery of treatment and aftercare. Some people with ependymomas have their spine scanned every six months, some do not. David has not had spine scan since diagnosis.  David’s doctor wanted to completely discharge him from the brain tumour clinic after five years, whereas another doctor in the field told me that nobody with brain tumour remaining should ever be discharged. It is all very concerning and it does not instil you with confidence.

I contacted the Astro Brain Tumour Fund, www.astrofund.org.uk an online support group which supports people with low- grade gliomas, and raises funds for low- grade glioma research.  I have kept going by trying to be proactive, in particular, raising funds for Astro Brain Tumour Fund (a member charity of Brain Tumour Research).  I have attended lobbies and conferences in an effort to learn more and raise awareness.  I have also, since, become a trustee for this Charity and will continue to support others, through the online and Facebook support groups, who are just starting out on this somewhat treacherous and frightening journey.

It has been a very difficult few years for David and indeed the whole family. David’s mates have all rallied around him and my husband and I have had such support from our friends, without whom I think we would have folded. I am desperate for there to be a far greater understanding of brain tumours and, in particular a better awareness of their symptoms so that sufferers are more quickly diagnosed.  Research into brain tumours seems to be a low priority in cancer research as it is considered a ‘rare’ cancer.  The survival rate for brain tumours has barely improved over the last 40 years, and this is a direct result of the lack of funding.  This is despite brain tumours killing or affecting more children and young people than any other cancer.   Each year, as the scan approaches, we go through the fear of the tumour growing back and when you look at the statistics, it does not look good.  But we live in hope, and hope will come from research. But we need the funds for that…….
Linda Rickford
October 2014 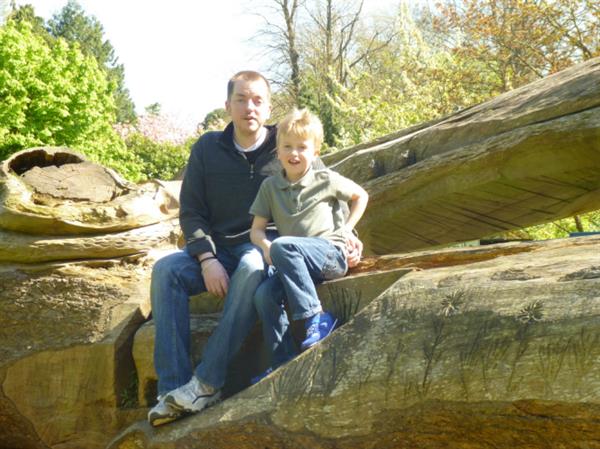