Corin Snell, of Ixworth in Suffolk, is now registered blind having been diagnosed with a low-grade meningioma in February 2014. She had been experiencing persistent headaches and painful, weeping eyes for months but it was only after a visit to Specsavers opticians that the pressure on her optic nerve was detected and she was advised to go to the hospital. She has undergone two craniotomies, one in April 2014 and the other in November 2018, as well as a separate operation to have a shunt fitted. In February 2021 a routine check-up showed further growth and she was referred for six weeks of radiotherapy, the start of which was delayed so she could finally marry her fiancé in a ceremony that was postponed four times because of the COVID-19 pandemic.

My symptoms started in around October 2013. I had headaches all the time and my eyes were really painful. I went to the doctor and the only way I could describe the pain was that my left eye felt like I imagine it would if someone had punched me in it. She didn’t take a look, instead she said it was due to migraines and prescribed me something I never took because I knew that wasn’t the problem. She thought my eyes were being sensitive to light but they felt like they were being pushed and were weeping constantly. It was only when I went to Specsavers optician that the pressure on my optic nerve was detected and I was advised to go to West Suffolk Hospital, in Bury St Edmunds, Suffolk, where an MRI scan revealed I had a large tumour and I was referred to Addenbrooke’s Hospital, in Cambridge.

“I was told that of all the brain tumours to get the one I had was one of the better ones.”

I had to wait a couple of months for my appointment at Addenbrookes and, in the meantime, I went blind in my left eye. In my naivety, I thought it was just from the pressure on my optic nerve and it would come back after that had been dealt with but it never did. In fact, I also lost 50% of the vision in my right eye. It’s true what they say about learning who your true friends are; I was working in a care home, had a big group of friends, was going out on weekends and as soon as I lost my sight, because I wasn’t fun to go out with anymore and didn’t want to leave the house, they weren’t anywhere to be seen. My mum took me for a walk as a bit of tough love but she wasn’t experienced in guiding anyone with sight loss and branches were tickling my face when I wasn’t expecting them to be there.

“Just a three-minute walk up the village I’d lived in all my life, to see someone I’d known all my life, and I had a panic attack.”

When I finally saw a consultant in April 2014, he said: ‘you’re not going home, you’re staying here and I’m doing surgery on you tomorrow morning’. As soon as he heard I’d lost my vision in my left eye and saw my tumour was the size of a tennis ball, he admitted me, which was good really because I didn’t have time to get scared about what was going to happen. It was an eight-hour operation and a long recovery where anything that could go wrong did. I even ended up with cerebrospinal fluid (CSF), the colour of hay, leaking out of my nose and had to have another operation to have a shunt fitted to drain it. It took two days of me having a huge pile of wet tissues next to me for anyone to realise what was happening.

“I was initially given a lumbar puncture but after being home about five days and hardly able to see anything, they readmitted me and resorted to fitting the shunt.” 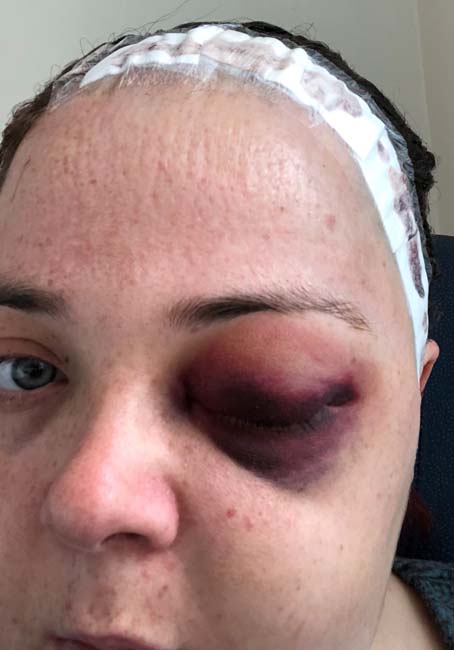 I went back to work that October doing activities for the residents, but only about 10 hours a week. I felt very much like they were just giving me a token gesture of a job though, so it wasn’t great and eventually I left. By 2017 I was used to my eyesight,so I returned to being a carer but I wasn’t trusted to handle the medication because of my poor vision and they wouldn’t give me contracted hours. I did that for six months, but I’d either work a 46-hour week or the week I left I only had one four-hour shift. It was one extreme or the other. I don’t currently work.

In August 2018 I went out for the day with my husband Dan, who was my fiancé at the time. We took our dog to a dog-friendly swimming pool and I felt ok but tired from the night before when I’d woken up to Dan looking like he was panicking. He said I’d fallen out of bed and he couldn’t wake me but I didn’t remember anything about it. We went out as planned the next day and got in the car after we’d finished and the next thing I knew, I was waking up in West Suffolk Hospital having had a seizure. Dan pulled over while I was having it and luckily a woman was outside gardening, whose husband suffered from epilepsy so she knew what to do.

“That whole episode really frightened Dan and even now he doesn’t like talking about it.”

I was told the tumour was back again and went in for my second craniotomy on Bonfire Night. That one wasn’t so bad and I went home two days later. I had a little bit of CSF fluid and could feel and hear it moving about. It sounded like I was shaking a hot water bottle when I moved. Dan could even hear it when I rolled over. They never really took me seriously with that but it happened after I went home and eventually settled down. I think they should have adjusted my shunt but luckily, I didn’t have any complications from that.

“All was well then until February last year when a routine scan showed more growth.”

My doctors said as it was only minimal, they were confident it was safe to leave further treatment until after my wedding. In September, having rearranged our date four times because of the COVID-19 restrictions, Dan and I finally got married. We were originally supposed to tie the knot in April 2020, then August 2020, then April 2021 but in September 2021 it went ahead as planned at Ravenwood Hall, in Rougham, Suffolk. It was a special day and one we weren’t sure we’d ever see because in 2018 somebody who really wasn’t qualified to say so gave us the impression my tumour was going to be inoperable. At the time Dan said that even if we only had three months together, he still wanted to marry me. When my surgeon found out what we’d been told he was livid because he said he’d performed much more complicated surgeries than mine. 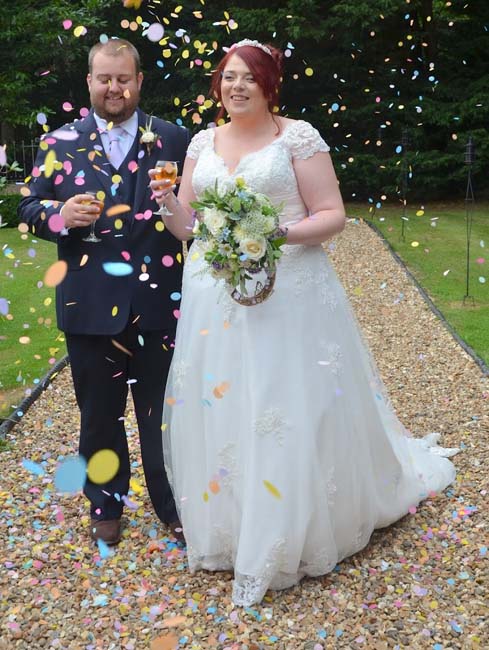 Exactly a month after I found out about the new growth, on 25 October, I started a six-week course of radiotherapy. As my tumour was low-grade, I had a fairly low dose but the getting up every day to travel an hour each way to Addenbrooke’s for six weeks was exhausting. It was a bit of a long slog but I got through it ok and am now waiting for my next scan in a few months to see whether or not it has worked. I’ve noticed a slight change in my vision. It’s more blurred and colours appear different, like someone’s turned them down a bit so post box red is more burgundy. I’m told that could be a reaction to some swelling around my optic nerve and I have been given some steroids to help it whilst I wait for an appointment at the eye clinic at Addenbrooke’s.

“My biggest fear is losing the little eyesight I do have; that’s what I think about when I lie in bed without any distractions.”

Part of the reason I had radiotherapy rather than surgery this time is because they didn’t want to upset things further by going back in if they absolutely didn’t have to. I know there are people much worse off than me and I’ve got my husband, who I wouldn’t change for the world, but my life compared to how it was or how I thought it would be 10 years ago is unrecognisable. It bugs me looking back because meningiomas are slow-growing and I had a squint in my left eye, the one that’s worse affected now, when I was younger and I wonder if that was the first signs of it.

I would advise people to go to the opticians regularly because I didn’t realise until it happened to me that it’s not just about finding out if you need glasses, there’s so many other things they can pick up on. I’d also say if your original diagnosis doesn’t feel right, not to make people untrusting of GPs, but don’t be afraid of the doctors’ receptionist thinking you’re a pain. If you want a second opinion, make sure you get one. 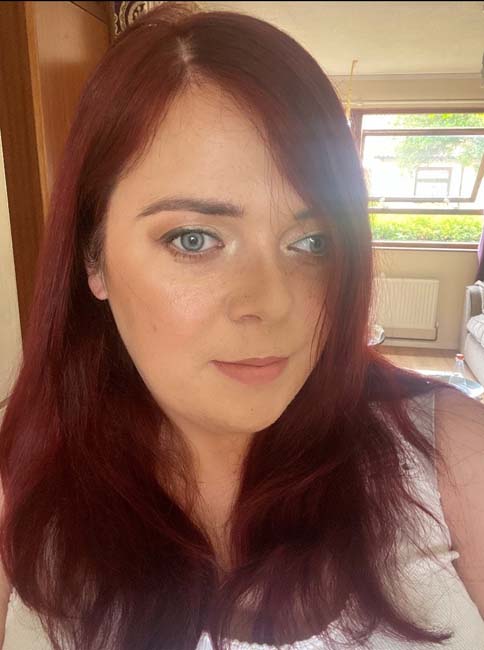