Chris Brown, of Chesham in Buckinghamshire, was diagnosed with a mixed germ cell tumour (GCT) in May 2012 after an optician discovered that he had double vision and referred him for tests. He underwent a successful craniotomy but a subsequent scan revealed he had a second tumour, a pineal germinoma. The 37-year-old, whose journey was captured in the BBC Two documentary Brain Doctors, then underwent a biopsy followed by radiotherapy and Gamma Knife surgery. Now married and with a four-year-old daughter, his tumour remains stable but causes him extreme fatigue.

My brain tumour journey was filmed for the BBC Two documentary Brain Doctors so I’m in the rare position of having a visual record of my experience, which I’m pleased my four-year-old daughter, Bethany, will be able to watch one day. I agreed to take part because I thought being on camera would ensure my surgeons would try harder to fix me, silly I know but I imagined it would give me an edge.

“I also got to record farewell messages for my family and friends in case things didn't go well or I lost my memory, which helped to make me feel more prepared.” 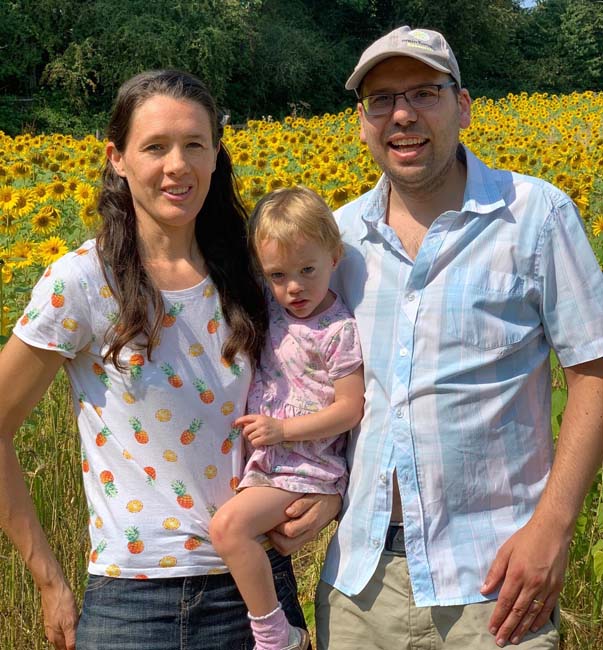 For me it all started with a trip to my local Tesco supermarket when I went for an optician appointment in May 2012. My prescription had deteriorated so I got a new pair of glasses but, after getting home, I realised they weren’t quite right and decided to go back. I’d always had double vision and used to watch television with one eye shut, but I had never really thought anything about it until the optician did more tests and, on finding out about it, referred me to the Stoke Mandeville Hospital, in Aylesbury, for an MRI and further testing.

The following day I got a call from the John Radcliffe Hospital (JR), in Oxford, asking me to come in to discuss my scans in two days’ time. I thought I was just going to be given some eye exercises to correct the problem but, instead, I was told that I had a brain tumour and they wanted to operate three days later.

“The shock was unbelievable and I thought it was game over for me – when you hear the words brain tumour you think you’re going to die.” 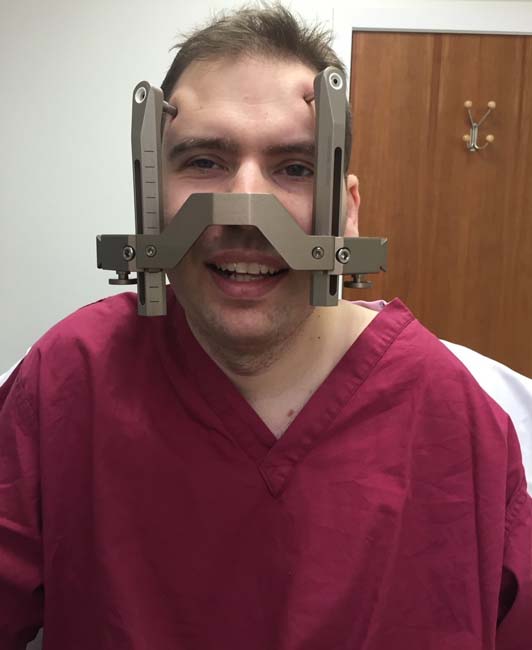 My dad had come with me to the hospital but neither of us knew what to say and only muttered a few words to each other. He drove to his house where we told my mum the shock news and, as expected, she was in bits. On my drive home, the gravity of it hit me and I called a friend who came over and listened as I cried my eyes out. It was later that same day that my surgeon called to tell me about the BBC documentary. I like to be the centre of attention so decided to go ahead with it.

My tumour was a mixed germ cell tumour (GCT) and although the craniotomy I had to remove it knocked me for six, I was relieved to have pulled through the op. I went home after a week or so but was soon asked to return to the hospital. I wasn’t able to drive so went with my parents and received the news the scan they’d done before I was discharged had shown another tumour.

“That one was inoperable but a biopsy revealed it was a pineal germinoma and resulted in me being given just five years to live.” 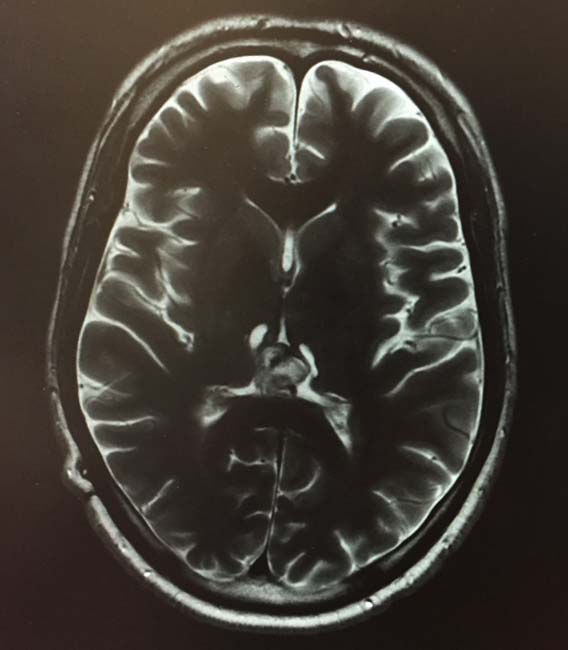 Five weeks of radiotherapy shrunk the tumour to 2mm and I celebrated being told I now had a full life expectancy. I tried to get on with my life as best I could. I started going to church and became a Christian, which has been a really positive thing in my life, and I even began dating again. I was going through a divorce and remember worrying that I would die alone because no-one would want me now that I was so weak and had so many scars on my head, but I did manage to arrange a date with a nice girl. I actually had to get her to call my parents to pick me up after I got legless on my first beer in about a year. Luckily I don’t get too embarrassed and as it turns out she wasn’t the girl for me.

“I met my wife Ruth in 2015 and we wed the following year; she’s beautiful and kind and puts up with me and my particular sense of humour!” 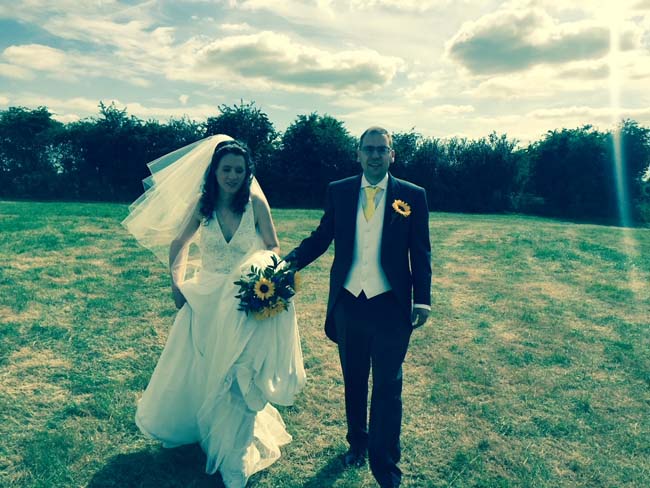 In 2016, one of my three-monthly scans showed growth in my remaining tumour and I returned to JR to be told that I needed another operation. The odds, though, weren’t good; there was a 40% chance that I wouldn’t survive and at risk, if I did, that I’d be left severely disabled, unable to drive and without any peripheral vision. Fortunately, I was able to have Gamma Knife surgery at Sheffield Teaching Hospital, which made my tumour stable. I was grateful to find this alternative treatment, but it has left me with cancer-related fatigue and I often find that I need to lay down in the day.

“I know without it I probably wouldn’t be here and feel really lucky to have benefited from the research that’s already taken place, which is why I support Brain Tumour Research.” 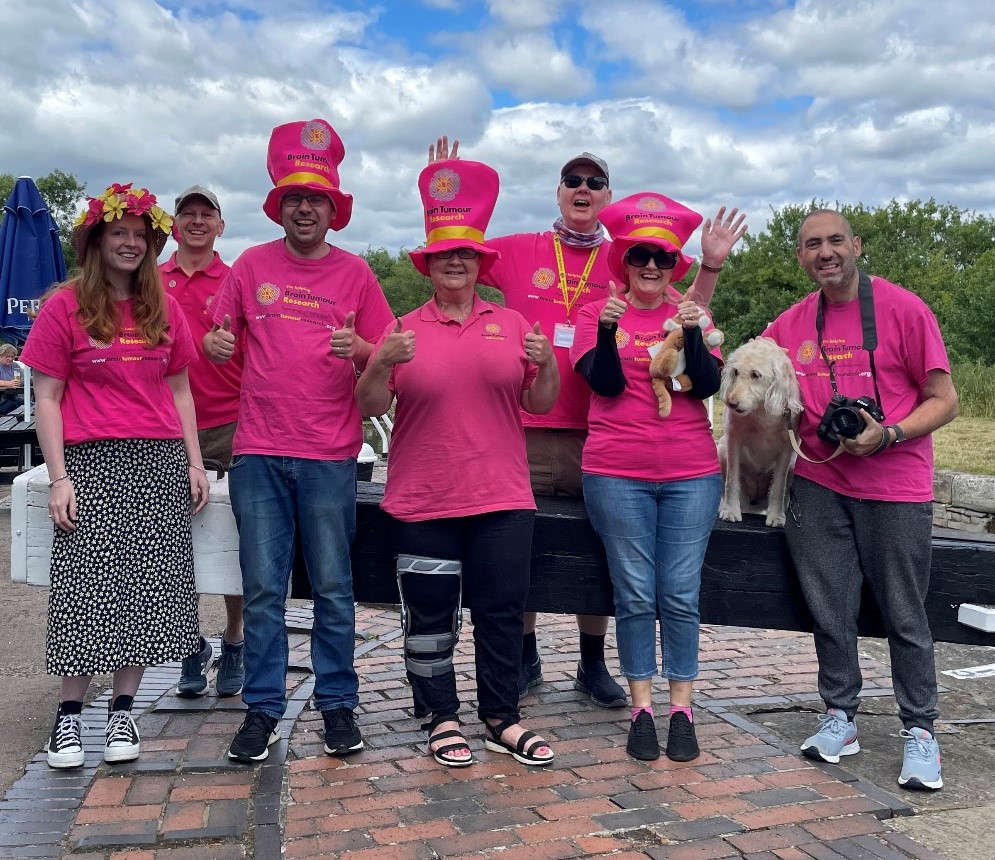 I’ve since started a support group called Brain Tumour Buddies. We currently have about 13 members and keep in touch via WhatsApp and through monthly meet ups where I make a point of telling plenty of jokes to keep spirits up. It’s a fantastic group; we’re like a family that shares our problems and our good news. It’s so nice to be with other people in the same situation who know what it’s like to be living with this dreadful disease. You don’t have to put up a front so can just be yourself, and it’s great for me to know that I’ve helped people, in some cases in their last few months of life. Anyone wishing to get involved can email me at cb1314@hotmail.com. 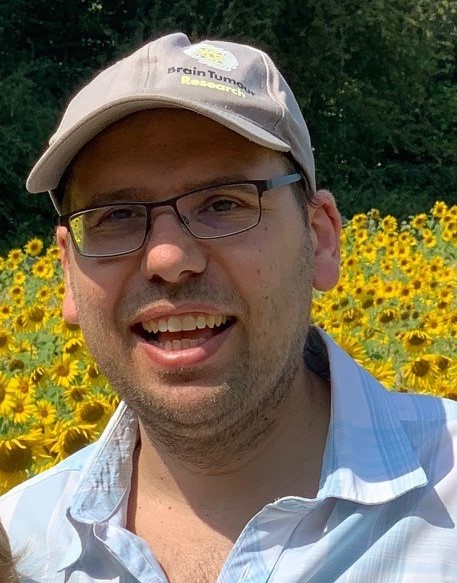