Charlotte was just three years old when she started having bad headaches. As she grew up, the pain would last for weeks and what was initially dismissed as stress was eventually diagnosed as a brain tumour. Although “low- grade”, the treatment to combat the growth of Charlotte’s tumour has had severe impact on her life. Aged 17, she is dependent on her parents and suffers from short term memory loss and impaired vision.

“Prior to her diagnosis, Charlotte was like any other teenage girl. She was interested in fashion and make up and enjoyed pop music, particularly Adele, Little Mix and Ellie Goulding. Now, while she can cook a simple meal, she has to be reminded about getting dressed and brushing her teeth. Our world seemed to alter the most six months after Charlotte’s treatment which was a necessary evil. Her life has been turned upside down by the side effects which are huge and life-changing and I am so glad we didn’t know before about the damage it would cause.”
Here is Charlotte’s story, as told by her mum Angela…

As a little girl, Charlotte loved to dance. She went to ballet classes and was always singing and performing. When she started to have headaches at the age of three, it was put down to stress. We were backwards and forwards to the GP, seeing numerous doctors.

The headaches could last for a week and, eventually, we were referred to a paediatrician. Again we were told that there was nothing sinister even when, as Charlotte got older, she could be in pain for weeks on end and her headaches would cause us to cancel day trips, stop her from seeing friends and spoil our holidays.

As Charlotte reached her teenage years and moved up to secondary school the headaches got worse. Amazingly she managed to carry on and missed very few of her classes at Sidmouth College. When she complained about not being able to see the board in lessons I took her to the optician.

After all those years, it was an eye test at Vision Express in Exeter which finally started alarm bells ringing. Charlotte had previously had glasses and I made the appointment thinking perhaps she needed a stronger prescription. However, the optometrist referred us to the Royal Devon and Exeter Hospital.

It was May 2015 and Charlotte was struggling with revision for her mock GCSEs. We went back to the doctor a week before we were due at the hospital and, yet again, we were told there was nothing sinister going on and nothing to worry about.

Once we got to hospital, things changed. The paediatrician was clearly concerned about something and Charlotte was referred for an MRI. A lump was discovered in her brain and we were transferred to Bristol for a biopsy. Although I was shocked by what was happening, I wasn’t surprised. It was as if the pieces of a puzzle were finally fitting into place explaining the headaches and the fact that Charlotte didn’t seem to have grown much since she was 11.

The news sent Charlotte into shock, she didn’t react initially but the consultant was brilliant and explained things clearly, spelling out what was going to happen and why.

Of course we were extremely upset but we knew very quickly that there was no point in letting our distress take over. Life doesn’t stop when something like this happens, we focused on what we could do about it and always looked on the positive side of things for Charlotte’s sake – and we are still like that now.

Charlotte had a shunt fitted to drain fluid which was building up around the tumour and once this was gone her headache eased and she hasn’t suffered from one since. Her tumour was a craniopharyngioma which had grown to 3cm on her pituitary gland. I remember saying how great it was that it was “low-grade” although I had no idea at the time the ongoing impact this supposedly benign growth would have on the lives of us all.

We were fortunate to get NHS funding to travel to Jacksonville, Florida, for proton beam therapy. It was a relief that this was going ahead although I knew it was only part of a journey. Steve and I both took time off work and we were in the States for nine weeks. Charlotte had 30 20-minute sessions of the highly-targeted radiotherapy delivered over six weeks.

Charlotte was well when we got home and while her first post-treatment scan showed the tumour had not grown her second gave cause for concern. Charlotte was having problems with her sight in one eye but we didn’t know if this was because the tumour was growing or as a result of the treatment. There was some evidence that the tumour had altered so Charlotte was back in surgery.

It was April 2016 and, this time, she had an operation to debulk the tumour with the aim of reducing the build up of pressure in the brain. Charlotte’s short term memory was severely affected after the procedure to the point where she constantly asks what day it is. She will read a book but by the time she has reached the bottom of the page will have forgotten what happened at the top.

Despite being desperately tired, Charlotte continued to go into school when she could although she was extremely disappointed not to be able to take her GCSEs. Her vision remains poor and she is learning how to use a white cane. The long spells in hospital mean Charlotte is struggling to get her fitness back and she is trying to get on top of the weight gain caused by taking steroids.

Charlotte still has periods of extreme fatigue – on Christmas Day she slept until lunchtime and even then fell asleep at the dining table. Recently she has been taking part in tests to establish whether she has been experiencing seizures which are impacting on her sleep.

When Charlotte was diagnosed, I don’t think we really appreciated how extreme the side effects were going to be and how long-lasting. While we have no regrets, it is so hard to see our daughter so damaged by the treatment which was our only option.

Charlotte has had a lot of help from physiotherapists and occupational therapists and the doctors are optimistic that her memory will improve given time. At the moment, Charlotte is very dependent on us – aged 17, we cannot leave her on her own and her life is so very different from that of her friends.

You hope for the sake of your child that everything will turn out as normal as possible and, although we are 18 months on from diagnosis, it seems it is very early days. We cannot know if Charlotte will ever be able to live independently or work full-time but I really hope she will be able to return to some form of study and will be able to dance again.

Prior to her diagnosis, Charlotte was like any other teenage girl. She was interested in fashion and make up and enjoyed pop music, particularly Adele, Little Mix and Ellie Goulding. Now, while she can cook a simple meal, she has to be reminded about getting dressed and brushing her teeth and the jigsaw puzzles from when she was six are back out of the attic because her poor eyesight means she can only see big pieces.
Our world seemed to alter the most six months after Charlotte’s treatment which was a necessary evil. Her life has been turned upside down by the side effects which are huge and life-changing and I am so glad we didn’t know before about the damage it would cause.

While Charlotte can have her down days, she is mostly positive. The one good side of her memory problem is that she can be very upset about missing out on things with her friends but she is easily distracted and will then forget those worries.

Charlotte started a Facebook page to document her journey. It has been a great way of raising awareness of brain tumours and we have been encouraged by the support we have received as a result. Much of the time, Charlotte tells me what to write and I post for her and every day we read the comments together.

Our hope is that, one day, there will be improved and less damaging treatments and, eventually, a cure. Charlotte and I are raising money for Brain Tumour Research which has a Centre of Excellence at Plymouth University where scientists are specialising in low- grade tumours like Charlotte’s.

Each day of research costs £2,740 and we are aiming to raise enough to fund a week – brain tumours kill more children and adults under the age of 40 yet just 1% of the national spend on cancer research has been allocated to this devastating disease. With more funding, we can make a difference. 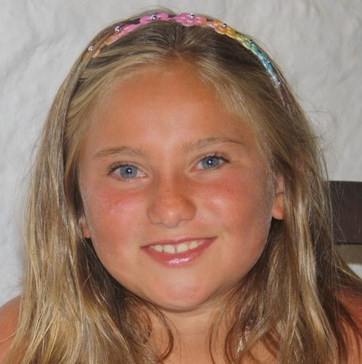