Charlie was the much wanted son of his parents. They already had two daughters and he completed their happy family. At 20 months he faced the terrifying prospect of surgery to remove an enormous and malignant brain tumour. Miraculously he made a remarkable recovery.
Charlie's father Nigel tells his story...

I got married in 1977 and by 1982 Nettie and I had two beautiful daughters. However I always wanted a bigger family but it was nine years before we felt secure enough financially to have another child and then I got my dream of having a son.  Charlie was nine and a half years younger than his next sister.  However they were both as thrilled as us. Our family was complete.

Charlie was just 20 months old when he was diagnosed with a malignant brain tumour. He had started falling over and being sick when he was around 18 months, but we were originally told it was hay fever.

A CT scan revealed an enormous tumour in his brain.  Immediately Charlie was taken to hospital in London.   Our treasured son was facing an operation which it was highly possible he would not survive, and if he did there was a strong possibility that he would be unable to talk, swallow or move his limbs and could be blind.

The emergency eight hour operation only succeeded in removing ¾ of the tumour, but he came through it and was able to raise his arm and say “Mummy” immediately afterwards. It was a fantastic relief.

Charlie then had to undergo a year of intense chemotherapy, followed by six weeks of radiotherapy, but he made a remarkable recovery and is now enjoying life to the full.

Tragically many other young sufferers have not been so fortunate.

We set up Charlie’s Challenge in 1993 as an inspiration to others and as a celebration of Charlie winning his fight.  The charity raises desperately needed funds for research into brain tumours. Finding a cure is our ultimate aim. 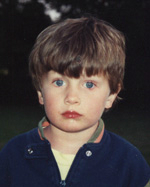