After suffering a seizure at his home in Milton Keynes, 54-year-old Brian Carrick underwent surgery to remove a grade two oligodendroglioma, which had been growing unnoticed for at least 10 years. Brian feels tremendously lucky it was discovered at a point where he could benefit from new research and before it became cancerous. Brian is currently undergoing a six-week course of radiotherapy followed by chemotherapy to try and remove a small amount of tumour that was left after surgery.

“I dread to think what could have happened if Emma hadn’t been home that day, or if I was driving at the time of the seizure. I’m very lucky that I’m here and able to tell my story, unlike so many others that have been struck by such a devastating disease like cancer.”

Looking back there were no signs that anything was wrong, I had been working absolutely fine, no headaches, numbness or blurred vision. I work in computer security, so I need to be able to mentally deal with a lot of detail and communicate effectively. So if something had been off, I would have been sure to notice it straight away.

My life changed overnight in October 2016 when I had cycled home from a day’s work and was met by my wife Emma as I came into the house. This is the moment it all goes blank and I don’t remember what happened next. Emma has since filled me in.

She remembers me walking in through the front door, heading up the stairs and coming straight back down, like I had forgotten something. She had started a conversation with me and I had looked back at her with a blank expression, only responding to her questions with the words ‘yup’ and ‘nope’. I have always had playful personality and pranking Emma was a weekly thing, so she thought I was being silly at first and that this was “Brian, being Brian”.

It was then that I wasn’t able to speak and she knew something was wrong. I fell to the floor like a falling tree and began fitting and kicking out. Emma must have been so worried as when the paramedics came they tried to stabilise my heart rate as they thought I was having a stroke.

I was taken to Milton Keynes Hospital, where I was stabilised. I remember being surrounded by lots of doctors discussing what was wrong with me. We were there for several hours, but the paramedics who brought me to the hospital came and visited a few times which was nice. Their visits and a cup of hot chocolate are the only things I remember of that night. Emma decided to head home and gather some things and let a few people know what had happened, though I now know it was the Great British Bake Off final, so that may be why she went home!

On the days that followed I underwent several MRI scans at Milton Keynes Hospital. I found the scans very uncomfortable after being still being in pain from the fall. It was then that I got the news that it was a brain tumour, and that the incident was actually a seizure caused by the tumour. Despite this diagnosis I felt positive that they had identified the problem and my treatment was being taken on by an expert at Oxford University Hospital who specialised in brain tumours.

The location of my tumour was in my front left temporal lobe which, I was told, normally controls your writing and speech when you are right handed. There was a possibility that they may need to operate on me while I was awake, which is something I desperately didn’t want to happen. I underwent several tests, which included benefitting from new research into how my brain thinks of words, which has been performed in recent years at Oxford. Further tests concluded that it would be safe to operate under anaesthetic and that my speech would be OK. I’m so thankful that this research has taken place and was a key aid that allowed my surgeon to remove 97-98% of my brain tumour without harming my speech or writing.

I went in for surgery in February 2017. Oxford University Hospital dealt with me splendidly and I was home after only five days. I was left with a very neat number seven-shaped scar by my ear, so neat that some people may have thought it was fashion. The scarring is now minimal and I have been fortunate to not have any disfigurement to my face.

Since the surgery, my memory isn’t as great as it used to be. I will forget the name of something, but remember everything else about it. An example would be a favourite actor’s name or what a piece of food is called, this is something that happened before but is worse now. I do find it really irritating, but I know it could have been a lot worse. A researcher told me it’s a naming memory issue, related to connectivity within the brain. Hopefully research in this area can progress and benefit people in the future. Research is so important and I’m lucky I can relearn that information.

I’ve just begun a six-week course of radiotherapy followed by chemotherapy, which should hopefully get rid of the remaining 2-3% of tumour. We have been told this will give me a better long-term prognosis.

We have always been very open with friends and family about what was going to happen with the tumour and the treatments I was going to need. I lost my sister Margaret to breast cancer at the same age I’m at now, so I wanted everyone to understand what severity my condition was and not to worry. Margaret suffered horrendously despite the great efforts to save her with surgery, radiotherapy and chemotherapy. I feel lucky with my situation and that this is something that can be dealt with.

I have never read anything online about brain tumours, their symptoms nor treatments. There is so much information online that could instil fear in people, and my doctors advised me not to look as it could be really unhelpful and worrying. We recently were told that not all cancer research is given the same funding, which seems absurd, especially when you see the statistics about brain tumours and how low the survival rate is compared to other cancers.

Emma and I have been together over 30 years and she has been great through this whole process. We have some trips planned for later this year and next, so I’m hoping to be well enough to travel. I’m also very determined to go back to full time work in the next month, even though I can’t drive, and I haven’t been on a bike since the seizure. I’m keen to get normality back in my life.

I dread to think what could have happened if Emma hadn’t been home that day, or if I was driving at the time of the seizure. I’m very lucky that I’m here and able to tell my story, unlike so many others that have been struck by such a devastating disease like cancer. 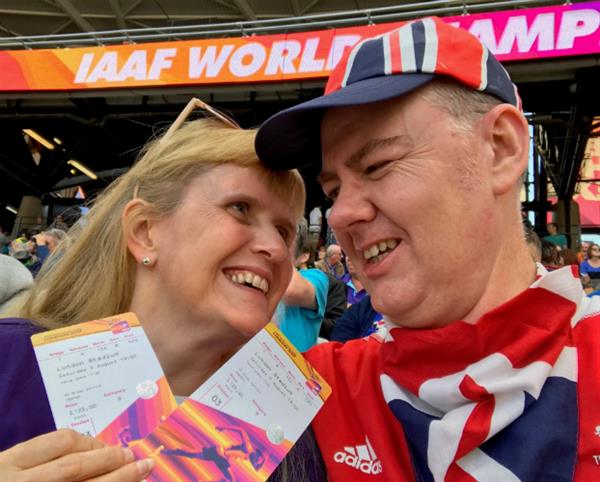