Ben was diagnosed with an inoperable grade 2 glioblastoma brain tumour on March 11, 2008, a week before his 29th birthday.  He underwent radiotherapy treatment and continues to receive chemotherapy, having endured 54 cycles of temozolamide to date.  Amazingly, having been told that all his treatment would render him infertile, in September 2012, Ben fathered a miracle baby girl, Martha Rose. Even more amazingly, his wife, Kate, gave birth to their baby son, Sidney George, in June 2014, despite Ben having endured more than 60 cycles of chemotherapy by then.

“I hope to use what is a very difficult and life-threatening experience for me to raise awareness and funding for research into brain tumours. If I can raise just a small amount of money and boost people's understanding of what is a very little-known-about disease, not to mention a terrifyingly complex issue, then my experiences will not be wasted and maybe other people suffering will see that all is not lost.”
In March 2008, I was out running, as part of my training to join Warwickshire Fire Service as a retained fire-fighter, when my left arm went numb.  I was about five miles from where I then lived in Shipston on Stour.  The next thing I remember is being picked up from under a car by two men.  The rest is history.

I was rushed to Warwick Hospital and kept in overnight where I was told I had suffered a seizure, probably due to low blood sugar.

After many tests it was discovered something more serious had happened and I was transferred to Coventry University Hospital where they discovered I had an inoperable brain tumour. Several MRI scans and a biopsy later the details were revealed to be the worst possible news – it was a grade 2 glioblastoma multiforme, marking the start of life-changing treatment and medication, which will continue for the rest of my life.
One week later, on my 29th birthday, I began radiotherapy treatment along with chemotherapy, which I continue to take to this day, already having completed 73 cycles of temozolamide chemo.

I have to take anti-seizure drugs to help me with the occasional fits I suffer as a result of the proximity of the tumour to my primary motor cortex (the central strip of the brain that controls movement).

I was also told that, as a result of my treatment, it was very unlikely I could have children naturally.

Very quickly, I decided that the best way to get through the experience and get better, both physically and mentally, would be to lead a much healthier lifestyle and to try and focus on others who are worse off than me.

I began running and doing different kinds of training to get myself into better physical shape – and this really helped me to focus, think straight and push myself forward. Also, because I had my first terrible fit while running I thought it was a good way to bring my experience full circle and face my fears.

I ran and trained for the next few years until in April 2011 I was fit enough to compete in the Brighton Marathon, clocking up a respectable time of four-and-a-half hours.

In September 2013 I took on The Three Peaks Challenge for Brain Tumour Research (climbing the highest peaks in Scotland, England and Wales, one after the other) and raised around £3,000 which is enough to fund a day of research at a Centre of Excellence.

In 2014 I pledged to complete at least one major challenge a year to help raise money for research into brain tumours and so in April that year I ran the London Marathon, proudly displaying my Brain Tumour Research pink running vest.  I will always be thankful to this amazing charity for giving me the chance to give something back.

After quite a long period of relative stability, in February of 2015, I had a number of bad seizures which put me back in hospital, but I worked really hard to get fit again.

In September I was back in hospital following another big seizure which left me with weakness down my left side.  I am improving slowly with the help of lots of physio and the use of an exercise bike which has been brought up onto my ward.

It’s all been a bit of a shock, but my latest MRI scan, which I had to be taken to Coventry hospital for, shows that there is not much worrying activity with the tumour itself – my speech, mobility and weakness issues are down to swelling in the brain putting pressure on the parts which control coordination.

Having had about 73 cycles of chemotherapy to date, I am about to start on a whole new course of radiotherapy and a more aggressive chemotherapy treatment than temozolamide which will hopefully work harder on the tumour itself.

I hope to use what is a very difficult and life-threatening experience for me to raise awareness and funding for research into brain tumours. If I can raise just a small amount of money and boost people's understanding of what is a very little-known-about disease, not to mention a terrifyingly complex issue, then my experiences will not be wasted and maybe other people suffering will see that all is not lost.

Despite everything I actually feel very lucky. I have proved people wrong by continuing to train hard and have also retrained in terms of my profession in order to be able to adopt a more healthy style of work.  Having formerly worked as a journalist, I am now a tree surgeon, enjoying the great outdoors and a lot less stress!

Even better, despite being told the high levels of medication and treatment would make me infertile, Kate and I had a miracle baby girl, Martha Rose, born in September 2012 and a second baby in June 2014 – a baby boy, Sidney George.  We thought Martha was miraculous enough and then Sidney was another miracle.  We never believed we would have a family, let alone a little boy and a little girl - it was beyond our wildest
dreams! 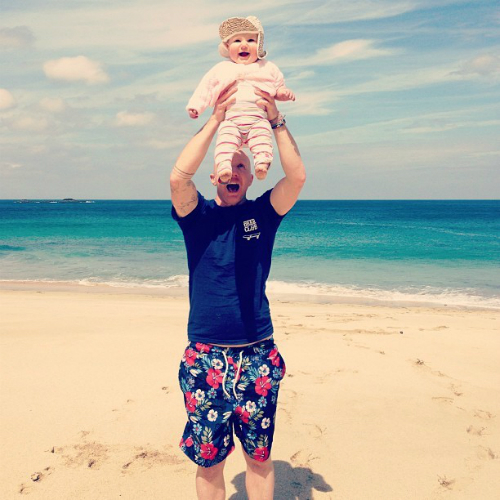