Fourteen-year-old Young Scout Leader Ben Anderson went to the optician for a check up at the end of the summer holidays. Within hours he was referred to hospital and a scan revealed he had a brain tumour. Immediate action was required and Ben underwent surgery. He recovered well but needed further treatment, this time in the US, to halt the growth of his tumour. Despite the gruelling treatment and disruption caused to his schooling, Ben did well in his GCSEs and is now studying for a career which he hopes will see him working with children with special needs.

“My world had been turned upside town. I had walked into the opticians with a child who seemed perfectly healthy and was just days away from going into year 10 to start his GCSE courses. Less than 24 hours later my son was diagnosed with a brain tumour and needed life-saving surgery. I was 29 weeks pregnant. When Ben turned to me and said: ‘I really want to be here to meet my new baby brother or sister. Am I going to die mum?’ I told him no, he wasn’t going to die and we would do whatever was needed.”

Ben had worn glasses since he was five and, in August 2013 when he was 14, we went to our local Specsavers in Congleton so he could have his prescription checked prior to going back to school. He had the normal sight test which was fine but, when photos were taken of the back of his eyes, they revealed a swollen optic nerve.

We were sent to Leighton Hospital in Crewe straight away. At the time, I didn’t really think there was anything wrong with him but he went through more tests. At 10am the next day he underwent an MRI scan and, just 30 minutes later, we were given the devastating news that he had a brain tumour. We were transferred to Alder Hey Children’s Hospital in Liverpool.

My world had turned upside down. I had walked into the opticians with a child who seemed perfectly healthy and was just days away from going into year 10 to start his GCSE courses. Less than 24 hours later my son was diagnosed with a brain tumour and needed life-saving surgery. I was 29 weeks pregnant. When Ben turned to me and said: “I really want to be here to meet my new baby brother or sister. Am I going to die mum?” My immediate response was: “No you’re not going to die Ben and we will do whatever we need to in order to deal with this.”

Our brain tumour journey had begun and Ben didn’t make it back to school until January the following year.

Looking back, I suppose there were some tell-tale signs. Ben was on daily medication for migraines but he was the third generation of our family to suffer from extreme headaches so, in itself, this didn’t seem particularly significant. As a younger child, he also had a head tilt – but it wasn’t until after Ben’s diagnosis that we realised this can also be a symptom of a brain tumour.

In fact, Ben had a pilocytic astrocytoma which had grown to a significant size at the base of his brain. The consultant was astounded that Ben hadn’t had any symptoms and told us he could have debilitating seizures at any time. Hours after the MRI scan, Ben was in surgery having an operation to release the pressure caused by the build-up of fluid on his brain. Days later, he was in surgery once more for a procedure which successfully removed 80% of the tumour. Every two or three months, we were back to hospital for follow-up scans and in January 2015 we were given the devastating news that the portion of tumour which remained in Ben’s brain was growing.

After everything that Ben had been through, this came as a bitter blow. The only saving grace was that we knew what had to be done. The location of Ben’s tumour meant traditional radiotherapy could prove catastrophic. We had already been informed that our best hope would be proton beam therapy, specialised radiotherapy which would target the tumour and cause minimal damage to the healthy tissue surrounding it. We were very fortunate in that we were able to get NHS funding which covered nine weeks of treatment in Oklahoma. At first, Ben’s dad went out with him while I stayed at home with my partner and our baby, Zoe, who was just 18 months old. I can’t describe how hard it was to say goodbye to Ben at the airport and know what he was going to go through in America. Several weeks later, it was my turn go to the States and be at Ben’s side. This time, it was Zoe who I said my tearful goodbyes to. Half-way through treatment Ben would need his mum more than ever. Zoe was still so little and wouldn’t remember this time. To choose one child over another is heart-breaking but I did what I had to do.

By the end of April 2015 and with Ben’s treatment finished, we were all reunited. Ben remained very lethargic although sometimes it was hard to tell whether this was a side effect of his treatment or because he was a teenager! The surgery had already left him with partial hearing loss in his right ear but he has learned to adapt and overcome this.

Throughout this whole experience, Ben has been brilliant. He wrote a blog before and after surgery as he thought it might be helpful to other young people going through a similar thing. Despite missing a whole term of school at Eaton Bank Academy, he managed to continue his studies and do revision during his treatment in the States, achieving eight GCSEs including maths, English language, science, and product design.

Ben is now studying for a Certificate in Support Teaching and Learning and gaining experience at Marfields Nursery and Primary School. He hopes one day to work with children with special needs.

Ben really had to fight to get through his illness and I think that fact that he was so excited about the new baby helped. The two have a wonderful relationship. Ben absolutely loves his Zoe and she idolises him.

We both drew great strength from meeting other children and their families while we were in Oklahoma and remain in contact, our shared experiences bringing us close.

Ben has scans every three months to see if there has been any change in his tumour. It is not possible to know what might happen in the future but we try our best not to worry about things which we can’t control.

Of course, I am extremely proud of Ben. I am a Scout Leader while he is a Young Leader and in 2014, Ben was presented with the Cornwell Badge which recognises scouts under 20 who have shown courage and endurance in extreme conditions. 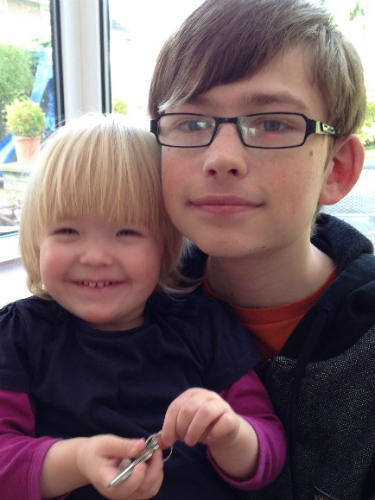