Five years after her brain tumour diagnosis, Anna is at a crossroads. Until now, she has declined any intervention or conventional treatment preferring instead to trust her own instinct and to “watch and wait.” But, with her latest scan revealing growth, albeit minimal, she has an important decision to make.

“Physically I’m in good shape and strive to live my life to the full but there is a cloud of uncertainty above my head. I know that somewhere down the line I will have to take action but no-one can tell me with confidence when the right time is and what that action should be. It is a frustrating time but I am hopeful. In many ways I am grateful to my brain tumour, it has made me realise what the most important things in life are. It has given me direction and a focus. After all, it is going to be with me for the rest of my life and so I had better make the most of it.”

Five years on from my diagnosis, I am facing a crossroads. I will have to make an important decision. Things are confusing and I don’t know what to do.

Whilst I have had more tests and scans than I care to count and have listened to tens of “second” opinions, people are usually shocked to hear that since I was diagnosed with a brain tumour I haven’t undergone any treatment; there has been no surgery, not even a biopsy to collect cells for examination.

Sure, conventional treatments such as radiotherapy and invasive procedures such as biopsies have been offered but I decided instead to listen to my intuition and to the people I trust and to do nothing. This “watch and wait” approach is opposed by some doctors but I believe I made the right decision and, as a result, have had a more or less normal life in the last five years.

I was diagnosed in December 2012 after travelling home to Prague to spend Christmas with my parents Ivana and Petr and my brother Martin. The last time we had been together was in September when I was starting my degree in politics and international relations at University of Kent in Canterbury. Now, three months on, they noticed changes in my face which had started to look asymmetrical.

Previously I had experienced facial spasms which were put down to exam stress during my final school year and I had continued to take supplements such as magnesium. We had really thought no more about it but now, with this new change in my appearance, I agreed to go for a check up.

The results were due the day before I was to travel back to England but the chain of events meant I never made the flight. Mum attended the appointment with me. The neurologist had a martyred expression on her face as she told us there was something on the scan. I recall how I pushed mum away as she reached out for my hand. I was plunged into shock and unable to take in what I was being told.

Things moved pretty fast from there. I was kept in hospital and had another MRI scan and a lumbar puncture to check for any infections. Admitted overnight, I told only a very few close friends and my ex-boyfriend what was happening. The next doctor we met with seemed so young. He delivered the news that there was no infection and that I probably had a brain tumour. A lot of things were going round in my head including would I be able to finish my studies or would this put an end to all of my plans. I asked: “Am I going to die?” “We’re all going to die one day,” he replied. Surely there must have been a better way for him to answer that question?

Looking back now I realise I am extraordinarily grateful to my parents as they agreed we would carry on with our lives. I would go back to uni and then return for another scan in a month or so but, until then, it was going to be business as usual. For a short while and, after seeing a psychiatrist, I took antidepressants and the benzodiazepine Xanax but was conscious of how addictive this can be and I stopped after a few weeks. The first year or so after my diagnosis my symptoms were really mild and I was doing OK and so things didn’t bother me too much.

As a family we had always been sceptical about conventional oncology medicine. We had seen my grandfather reject chemotherapy and radiotherapy when it failed to help his lung cancer and he lived for another ten years without any treatment. In my case, treatment options were limited and we felt we had to be very careful about any choices we made and to make sure we listened to differing opinions.

In any case, there are very few options. The location of the tumour means it is inoperable, it would take several hours to reach it to take samples for a biopsy and this would put me at high risk of a stroke, leaving me disabled. Chemotherapy and radiotherapy can be barbaric and seem to me to be very unmodern and, I think in my case, would cause much more harm than good leaving me worse off.

I count myself lucky that as a family we have a lot of friends who are doctors and others who work in the medical field so there have always people around who we could talk to and ask questions of. Now, as I look back, I honestly think that had we listened to the first doctor we spoke to I would have gone down the path of conventional therapy, would have spent the last five years in and out of hospital, would have undergone surgery and would possibly be dead.

It was university reading week when I had my PET scan. This time there was nothing active to see so my tumour was dormant, low-grade and could well have been there since I was born. It was identified as a grade one or two diffuse intrinsic brainstem glioma. The brainstem is a crucial location as it is difficult to access and controls so many things including breathing, swallowing, speech, and facial muscles. While I am unlucky that the location of the tumour means it is inoperable I count myself lucky that my symptoms could be so much more severe than they are.

The mildness of my symptoms allowed me to be mostly in denial about my diagnosis for around two years. But as the asymmetry in my face grew worse I also had increased psychological issues. I would go home to Prague where my parents became increasingly anxious, the time between visits made the changes more pronounced.

Whenever I was due to have a scan my senses heightened and I would become more and more paranoid about every possible symptom which might suggest the tumour was growing. I also started to suffer from panic attacks and anxiety. University became my safe place, very few people knew what I was dealing with. Mum began to think I should have a biopsy but I was against it. The risks were too high. All the time my dad had been researching possible treatments and talking to doctors in many countries and our differing opinions have caused a lot of tension which was affecting our relationship.

In consultation with my neurophysio-nurse I started to have Botox every few months and this helps with the muscle spasms which plague me and means my face appears more symmetrical. To start with I was very sceptical, as I am about everything, but agreed to give it a go. Of course you have to be very careful as things can go wrong – as they have for many people – but I have had great results and it has made a big difference to the way I feel about myself.

I have also adapted my lifestyle in order to cope with my symptoms and the anxiety that goes with my diagnosis. For example, I meditate every day, I like to exercise by walking or cycling and I practice mindful breathing. I don’t really drink, I am careful about what I eat and try to stay away from processed sugar and dairy.

Throughout all of this I was able to continue my studies and I graduated in 2015 and moved to Birmingham where I started working for a refugee charity followed by another role at Citizens Advice.

Although I had previously been in denial about my diagnosis I found that as my symptoms became more pronounced I became more interested in finding out about the disease. Having previously been very selective about who I told, it was a really big decision for me to start my blog – Anna's Brainstorm: Life with a Brain Tumour and Beyond – but I am very grateful that I did because it has helped me enormously.

I write when I feel I have something to say and I write to connect with people. The blog opened a door to a whole new world and has been a form of therapy for me. One of the most important ways in which it has helped me has been in allowing me to express how my diagnosis has affected my mental health and talking to people with similar issue.

In June 2017 I started a new job as PR Assistant at the Brain Tumour Research charity. When I saw the recruitment advert it was serendipity as I wanted to be in an organisation which makes sense to me, somewhere where I can contribute in some way and I feel this is where I am supposed to be.

Working at the charity I have met so many amazing people and had the opportunity to find out so much more about this disease. In many ways I am grateful to my brain tumour, it has made me realise what the most important things in life are. It has given me direction and a focus. We all have obstacles in our lives, this one is mine. After all, it is going to be with me for the rest of my life and so I had better make the most of it. 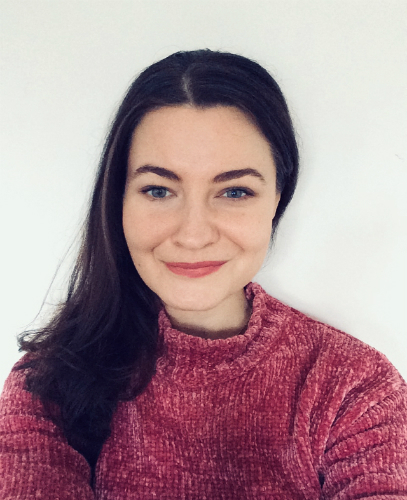