Mam-of-two Ann Brown had experienced a range of unusual symptoms for 16 years but it wasn’t until her life slowed down during the COVID-19 UK lockdown, that she noticed just how bad those symptoms had become. In May 2020, she was finally diagnosed with a meningioma brain tumour. She underwent a craniotomy, followed by a six-week course of radiotherapy treatment. Ann, 41, is now medically retired. As she reflects on a truly life-changing year, she is focusing on her family, as well as turning her attention to fundraising, to help find a cure for brain tumours.

I first noticed a range of unusual symptoms 16 years ago, when I was pregnant with my oldest son. I was driving to work one day when all of a sudden, my sight went in one eye. It was really strange and I thought I might have been having a stroke. When I got to work and spoke to my colleagues, I wasn’t making much sense, so one of them rang the hospital. I went in to be checked up and they diagnosed me with preeclampsia, as I was also suffering from severe headaches and had high blood pressure. 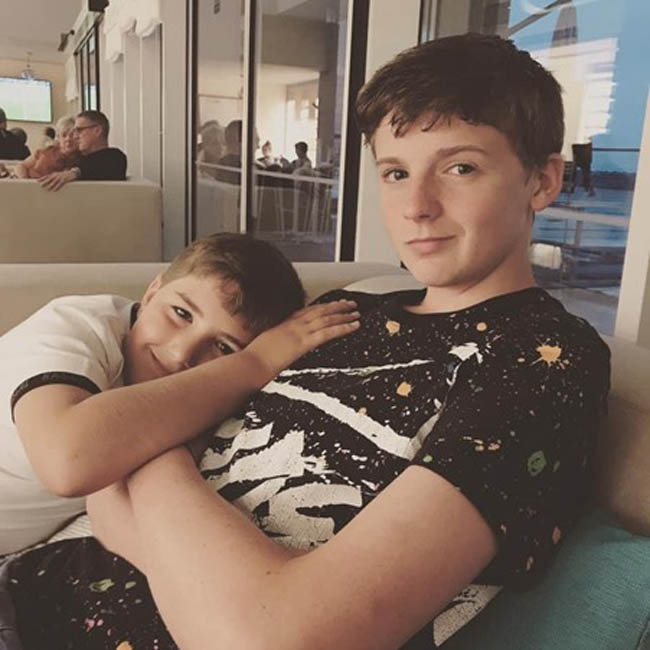 In spite of becoming a mam to two healthy boys and building a successful career in the finance sector, over the years, my health problems continued. I frequently suffered from headaches and migraines and, from time-to-time, I would go blind in one eye, just as I had done during my first pregnancy. I would experience numbness in my face and weakness in one arm and leg, down the left side of my body. My symptoms led me to go back and forth to the doctor but I would usually just be prescribed migraine tablets. In 2008, I was given a full body MRI scan, after I was experiencing constant pins and needles.

“They also sent me for neurology tests and the diagnosis was a vitamin B12 deficiency.  With hindsight, I am amazed that scan didn’t flag anything in my brain.”

In 2017 I was given another scan, this time a CT of my head, as I suffer from chronic sinusitis. They found cysts in the tubes between my nose and ears but again, they didn’t find anything in my brain. At the time I was working as a customer experience manager for a finance company. I worked 40 to 50-hour weeks, travelling around a lot in the car. My symptoms were getting worse but I put it down to being a busy mam with a demanding job. I raced around at a million miles an hour, going from appointment to appointment and grabbing a sandwich to eat in the car for lunch. I would usually grab a packet of pain killers at the same time; I had constant headaches and lived on paracetamol, to try to manage them. 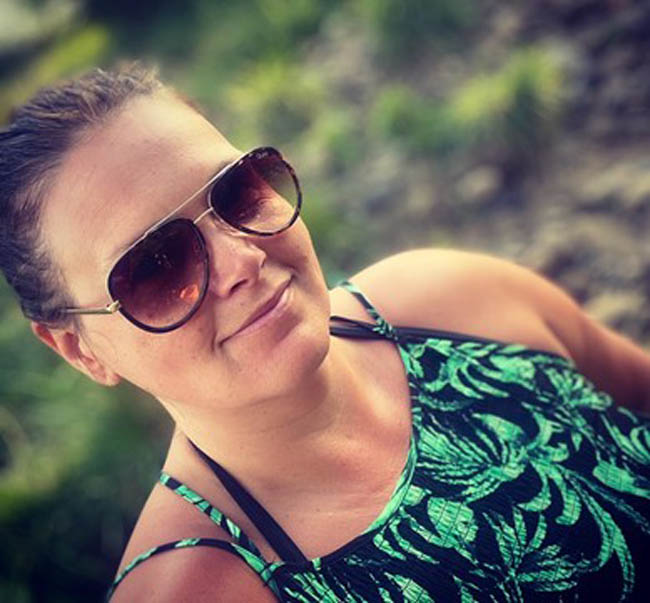 I was still feeling unwell all of the time when, in March 2020 the COVID-19 pandemic hit the UK and we were forced into a national lockdown. I was no longer on the road all day and working crazy hours, but I still felt really poorly. I would wake up with headaches every day. The symptoms weren’t necessarily getting worse but as I had slowed down and was working from home, I began to notice them more. By May, I knew I had to seek medical advice and so I saw my GP, who diagnosed me with an iron deficiency. His tests also revealed a weakness in my left side and he thought I may have had a stroke.

“I was sent to University Hospital of North Durham A&E the same day, where I was given a scan. The medic came to tell me they would need to do another scan with contrast, at which point I began to get worried.”

A few days later I had the scan at Darlington Memorial Hospital and my results were sent for review with the cancer panel at the Royal Victoria Infirmary (RVI) in Newcastle. I received a phone call asking me to go in for my results on 19 June 2020. When they advised me to bring somebody with me, I knew it wasn’t going to be good news. 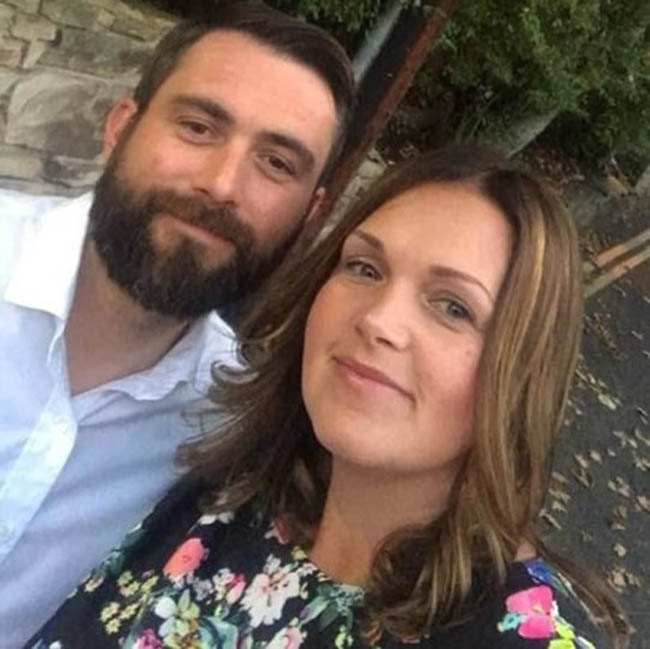 My husband Nikki and I went to meet my consultant at the RVI and he told us that they had found a meningioma brain tumour in my left parietal lobe. I was given the option of either watching and waiting or brain surgery to remove the tumour. To be honest, as soon as I heard the words ‘brain tumour’ I sort of zoned out, as I didn’t want to believe it. Luckily, Nikki was there to ask all the right questions and take in the information we were being given. I think deep down I was expecting this news but I had buried my head in the sand. 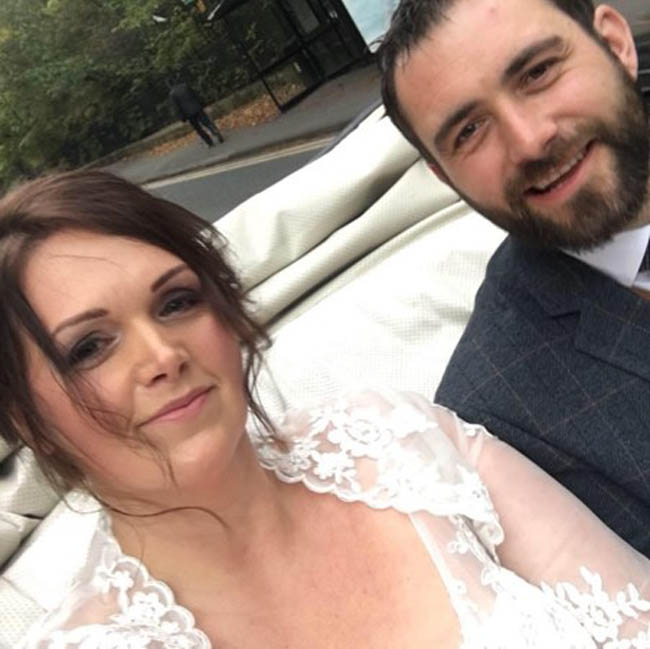 I made the decision to go ahead and have the operation but I only told close family about my diagnosis.

“The worse thing was telling my boys. How do you break the news to your children that you’ve been diagnosed with a brain tumour?”

I told them I was poorly with a bad eye and that I would have to go into hospital for a few days. Things happened really quickly and so I didn’t have time to think too much about the surgery or get nervous about it. I avoided doing too much internet research about brain tumours, although I did convince myself that I would need radiotherapy after my surgery. I managed to stay calm until the day of the operation, which was Monday 6 July 2020. When Nikki dropped me off at the hospital and I was left on my own, it hit me and I was terrified. 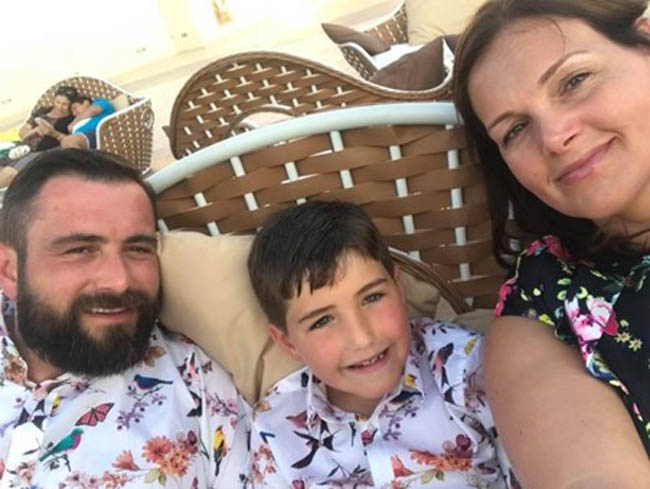 The surgery lasted eight hours and went well but I was quite poorly afterwards. Part of the tumour had grown into my skull, so the surgeon had to take some of my skull away and replace it with a mesh. I had to stay on the high dependency unit for the whole time I was in hospital. I was discharged four days after my craniotomy, on Thursday 9 July. They had wanted to send me home on the Wednesday but I wasn’t ready. I was petrified of going home. I just wanted to make sure that when I was discharged, I would be fit and well enough to stay at home to recover; I was scared of having to come back to hospital. 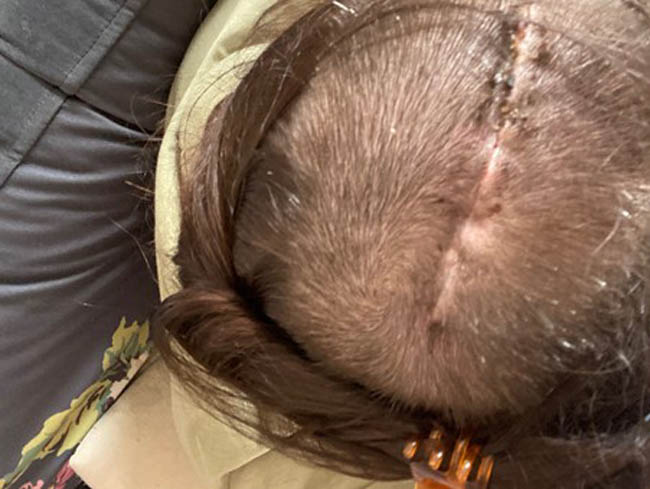 Things got off to a bad start when, on the day I left the hospital, I slipped in the car park on our way to the car. It really knocked my confidence and I convinced myself I couldn’t walk. Two weeks later we were back in the hospital for the results of the biopsy. I remember my consultant was shocked when he saw me attempting to walk into the room. I was really unsteady on my feet. He did another CT scan to see what was going on but my struggles were just caused by trauma from the operation and he was pleased with how the surgery had gone. I was diagnosed with a grade 2, atypical meningioma.  ‘Atypical’ denotes the fact that my tumour does not behave in a ‘typical’ way; its rate of growth and recurrence is hard to predict, but it is more likely to recur after surgery than a grade I meningioma.  In order to reduce the risk of this re-growth happening, I was referred for a six-week course of radiotherapy at Newcastle Freeman Hospital. However, The Freeman called me and said I am closer to James Cook Hospital in Middlesbrough, so that is where I have been travelling to and from for daily treatment, since 28 October 2020. It is a 60-mile round trip and I have to allow 1.5 hours each way for the journey. Thankfully, Nikki is a butcher and his work has been fantastic in allowing him time off to take me to and from my appointments, as I can no longer drive. 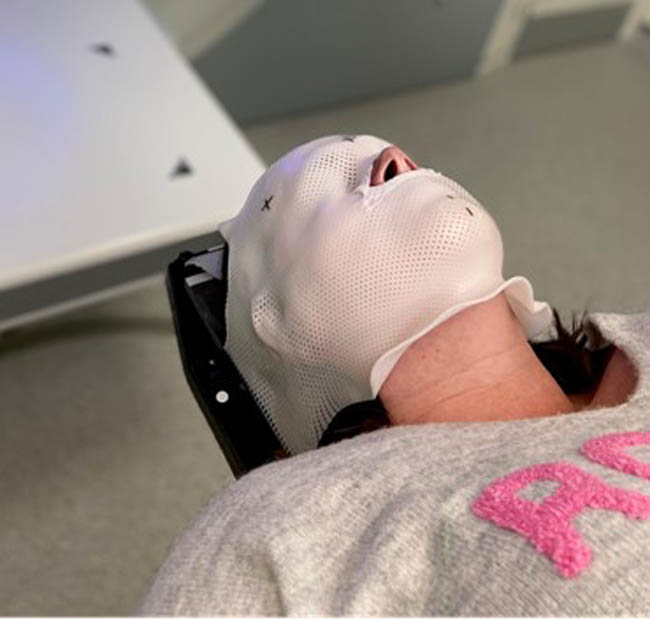 I was terrified of radiotherapy before I started, as I didn’t know what to expect. The first two weeks turned out to be a doddle. By weeks two to three, I began suffering with headaches, soreness and tiredness. I was prescribed steroids, which have helped a lot with the symptoms. My hair also started to fall out and now, as I approach the end of my course, it has practically all gone. My surgery scar is also quite intrusive, as it stretches right across my crown. I decided not to have a wig or wear hats to cover it but I am thinking about getting a weave put in by a local hairdresser who specialises in it. The thing about my appearance now is that people can notice something is wrong with me, whereas before I didn’t look poorly at all. I’m having to explain what has happened to more friends and neighbours, who I had previously kept it quiet from. 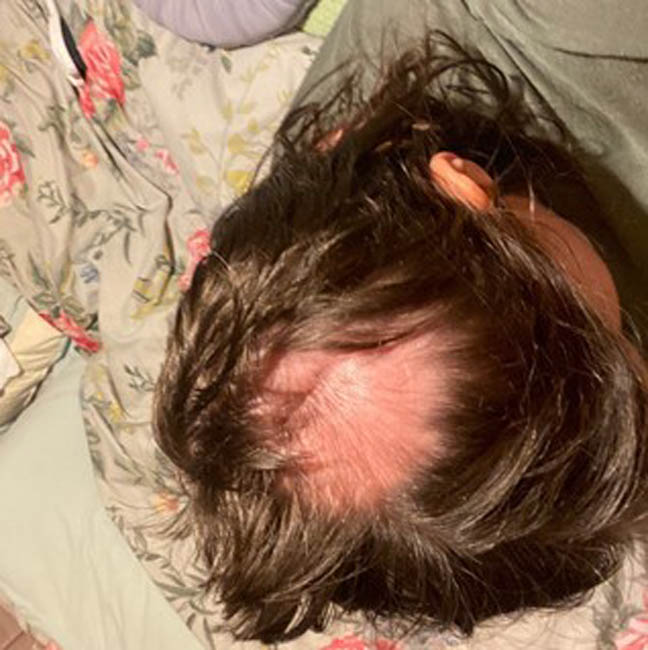 The boys obviously know about everything now. My youngest, Joey, takes it all in his stride but Lewis is more sensitive. My dad has recently been in hospital after contracting COVID, so that has been another wrench for Lewis to deal with, as he was spending a lot of time with his grandad before that happened.

“I am now having six-monthly scans, to monitor things. I know everyone has had a tough year in one way or another but as I reflect on everything that I’ve been through in 2020, I feel like an emotional wreck.”

Normally I am strong and stoical, dealing whatever with challenges come my way. I would be the one telling other people to ‘pull themselves together’. I’m not strong any more but I am a lot more compassionate and understanding. 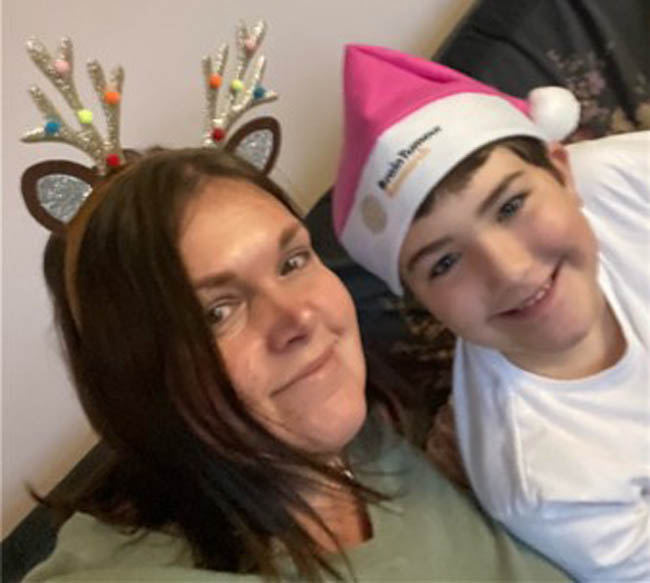 Later this month I will be taking part in Wear a Christmas Hat Day to raise money for Brain Tumour Research. I came off social media when I was first diagnosed with a brain tumour, as I just wanted to focus on my health and my recovery. Recently, I re-joined Facebook, in order to access an online brain tumour patient support group. It was in that forum that I heard about the Brain Tumour Research Santa Dash, taking place on 12 December. I initially wanted to sign up to do that event but unfortunately, I won’t be fit enough following my radiotherapy treatment, which finishes on 8 December. Instead, my son Joey and I have registered to take part in Wear a Christmas Hat Day on Friday 18 December. Joey’s school, Escomb Primary, will be taking part. Children are encouraged to go to school wearing something festive for the last day of term. Christmas is going to look a little different for everyone this year, especially with the ongoing local lockdowns and social restrictions but this is something everyone can get involved in, in a safe way, and raise some money in the process. The kids can make a donation by chucking some coins in a bucket. Even if we raise £100, it will be fantastic to give something back to a cause so close to my heart. 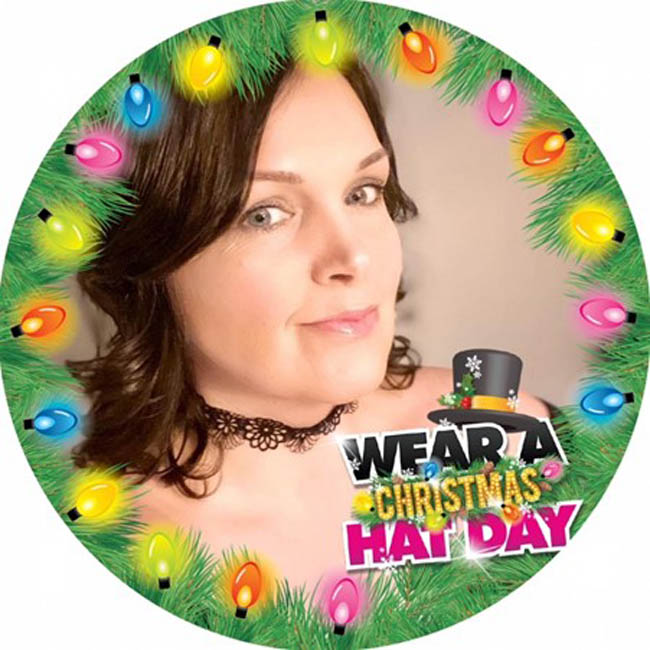 If you have been inspired by Ann’s story, you may like to make a donation via or leave a gift in your will via www.braintumourresearch.org/legacy 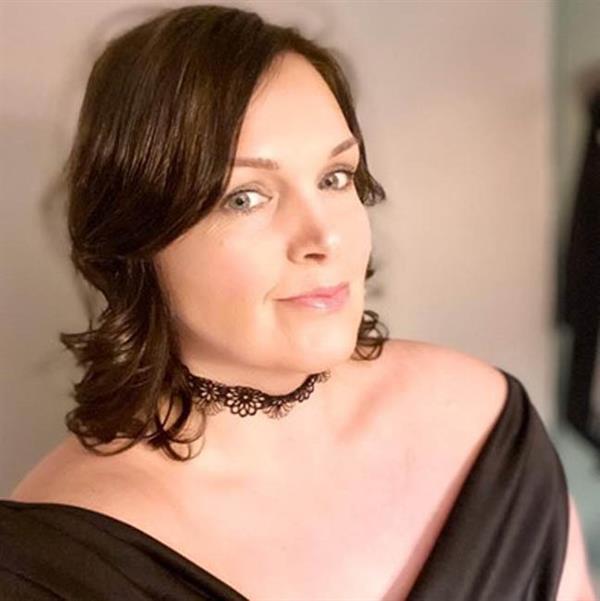