Alison was diagnosed with an acoustic neuroma at the age of 44 after suffering with headaches for many years. They gradually became worse until she was also having to cope with blurred vision, vomiting, exhaustion and even pain when walking. Alison’s diagnosis only came about after being sent for an emergency hospital appointment by an optician and her refusing to believe that all was fine after undergoing a range of tests, leading to her having an MRI scan.

Life slowed down after I became ill with a brain tumour. I have always worked in academia since being awarded my doctorate from the University of Gloucestershire in 2001, but after my diagnosis I have gone part-time, giving me the opportunity to explore other avenues including setting up my own millinery studio, Goodrum & Merryweather. It’s not all that surprising however, as I have always ‘floated’ around art and design. Most recently, I have been busy making hats for Royal Ascot, which takes place the same week as Wear A Hat Day with Flowers! 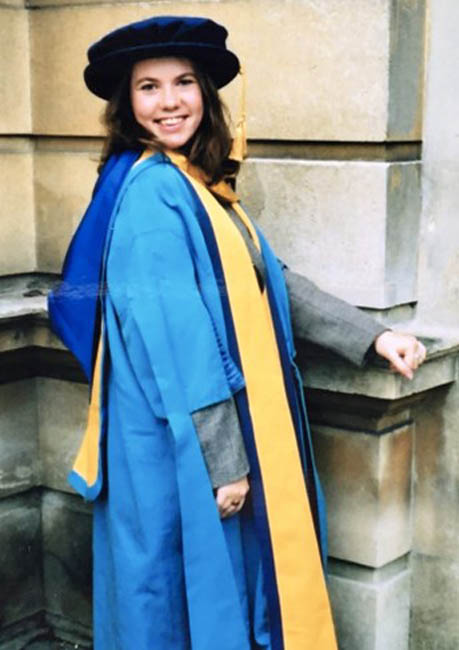 In the past I rarely went to the GP and had never been into a hospital before my diagnosis.

I had always suffered with headaches but thought it might be a hereditary thing and tried to cope as best I could. However, by September 2018, the headaches had become a lot worse and my vision had become blurred. I had also started vomiting.

I put it down to a busy life and work-related stress, but on my birthday I went to get some new glasses at the local optician. After examining my eyes, I was immediately referred for an emergency, same day, appointment at the hospital. I was there for a lengthy amount of time while they ran tests, including checking the pressure in my eyes, but didn’t find anything wrong and was given reassurance that nothing was amiss.

Five weeks later, I went back for a routine follow up appointment and was feeling extremely exhausted and not at all well. A young doctor was there to tell me I was fine, but I insisted that I didn’t want just to be sent home feeling as I did and reminded her that I was also vomiting regularly.  She agreed to send me for an MRI, but insisted there was nothing to worry about and it would come back clear.

“It was obviously a shock to learn the scan had picked up a tumour, yet also a relief as it gave an explanation for why I was feeling so rubbish.”

I thought that at least now that doctors had found something, they could do something about it, especially as by this stage I was even finding it painful to walk and couldn’t imagine continuing to live with all my symptoms.

Doctors at the Norfolk & Norwich University Hospital were able to see from the scan that my tumour was an acoustic neuroma, which meant I had a problem with my ears rather than my eyes. I naively thought it might be sorted out with a course of ear-drops or a minor procedure. 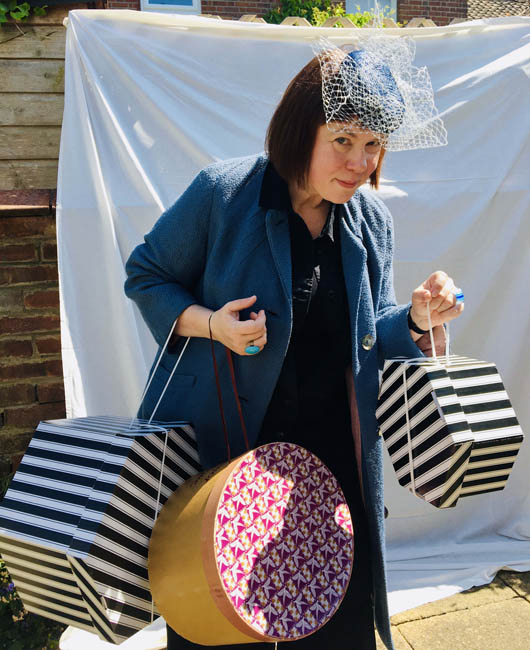 Instead, I found myself being referred to Addenbrooke’s Hospital in Cambridge where the neurosurgeons explained that the tumour was quite large – about 3cm x 3.5 cm – so their opinion was that I couldn’t afford to watch and wait and that surgery was the only route. I had audio tests which showed some loss of hearing, which amazingly I had been totally unaware of, and that my balance had started to be compromised.

“I underwent complicated surgery at the end of April 2019 which took 12 hours. The tumour was in a tricky position and was wrapped around the hearing and balance nerve which explained why I was having to walk with a stick by then.”

It meant surgeons had to take the translabyrinthine approach typically used for acoustic neuroma. It involves drilling the bone in the mastoid cavity immediately behind the ear canal and means sacrificing the inner ear, resulting in no hearing at all in that ear after the tumour is resected. 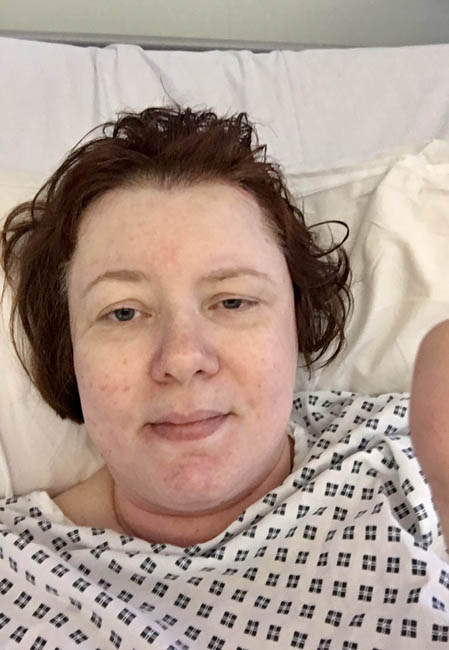 I was told the tumour was low-grade and slow-growing which may explain why I had suffered with headaches for years.

After the surgery I felt really nauseous and was vomiting a lot. I felt completely disorientated and hadn’t realised I wouldn’t be able to move myself around. I wasn’t ready for that. I had to learn to walk again, something I am even now still working on while improving my balance. Before my surgery my brain had learned to cope quite well with the tumour’s effects on my balance, although I was having to use a stick towards the end, but I couldn’t go outside unaccompanied for a long time after the craniotomy. Crossing the road remains challenging as it means dealing with the movement of traffic, which affects my balance.

Twelve days after surgery at Addenbrooke’s, I was admitted to the Norfolk & Norwich in an ambulance as I had started to vomit again. I stayed overnight on a drip – possibly because I was dehydrated from all the vomiting – and had lots of tests including bloods and a CT scan while doctors consulted with Addenbrooke’s. In the end, no one really explained what it was all about but I was considered safe to be discharged home.

Even now, more than three years on, I have to be careful about how I move around. I tend to avoid going out after dark as I need visual references to help me to balance. I still have headaches and days lost to headaches, but they are improving. Post-surgery the headaches were horrible and I was very surprised to be discharged less than 48 hours after the operation.

“I see my life as split into before and after surgery. However, I am very keen to rise to the challenge I face and am determined to continue to improve and get on with my life.”

Just after my diagnosis, a consultant told me I was one of the unlucky ones being affected by a brain tumour but conversely I see myself as one of the lucky ones. My surgeons did a really good job and saved my life. Mine is a really positive story, yet discovering that brain tumours are the biggest cancer killer of the under 40s, has shown me that so many others aren’t so lucky. 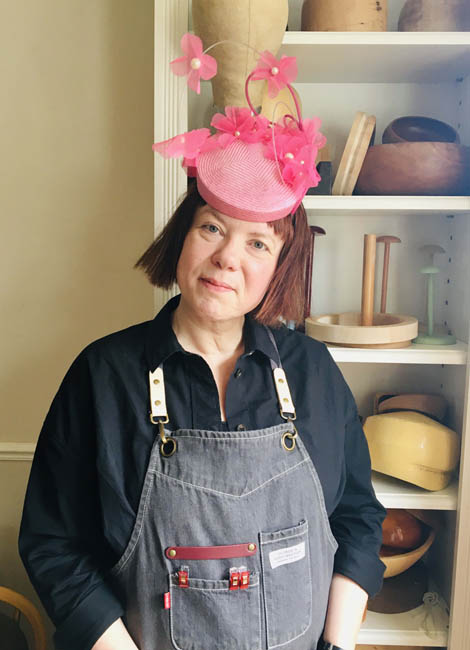 “Brain Tumour Research’s Wear A Hat Day with Flowers campaign struck a chord with me and prompted me to design a special Brain Tumour Research pink hat to celebrate. Millinery has been an important part of my recovery these past few months and years.”

My vision and stamina were poor immediately post-op and I wondered if I'd be able to continue making hats. Thankfully, after time and healing and feeling better, I am now hatting again and have set up 'Goodrum & Merryweather', my handmade millinery studio. 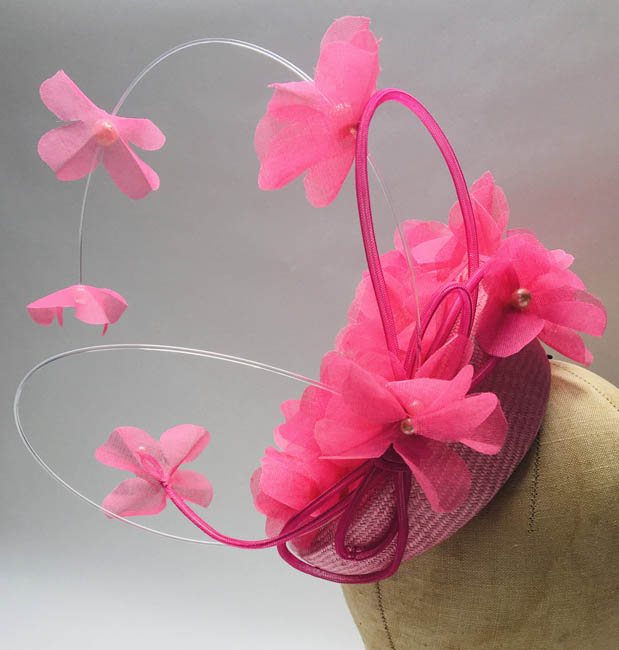 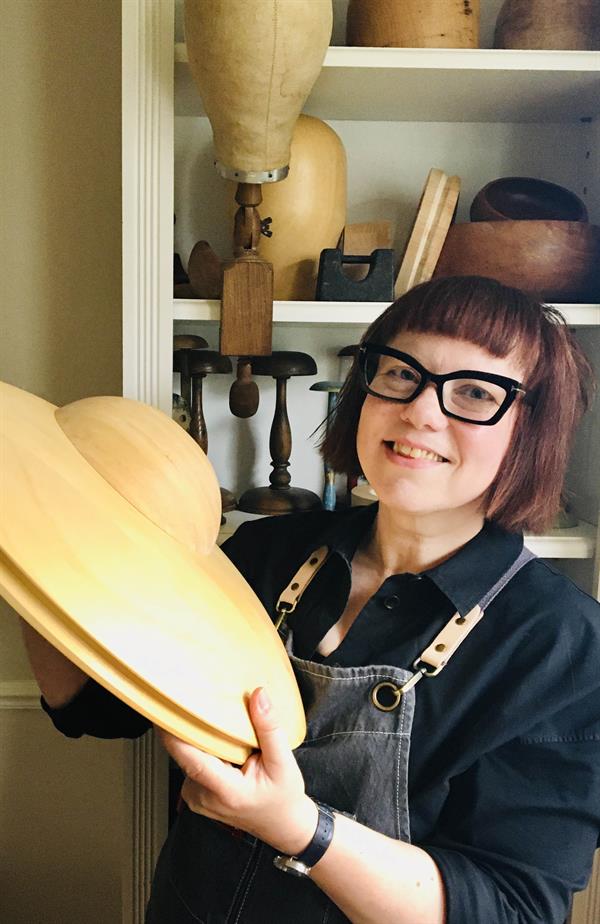