Thirty-year-old Adam Dilley from Bedfordshire was just weeks away from becoming a dad when he and his partner Tasha were given the devastating news that he had an aggressive brain tumour. Adam’s shock diagnosis came after months of doctors misdiagnosing him with sinusitis, after he suffered symptoms including headaches, blurred vision and jaw pain. Adam underwent gruelling surgery to remove the tumour but was told it was very likely to grow back. Tasha is due to give birth to a baby boy next month.

Tasha and I have only been together for a year or so, so when we found out that Tasha was pregnant, it was a bit of a shock but we were really happy and excited to be starting a family together. We both grew up in Central Bedfordshire – Tasha’s family are from Henlow and mine are from Shefford – and we now live together just a few miles away in The Wixams, near Bedford. We’ve got a lovely flat, which we’ve been getting all ready for the baby and up until my diagnosis in October, life was pretty rosy. 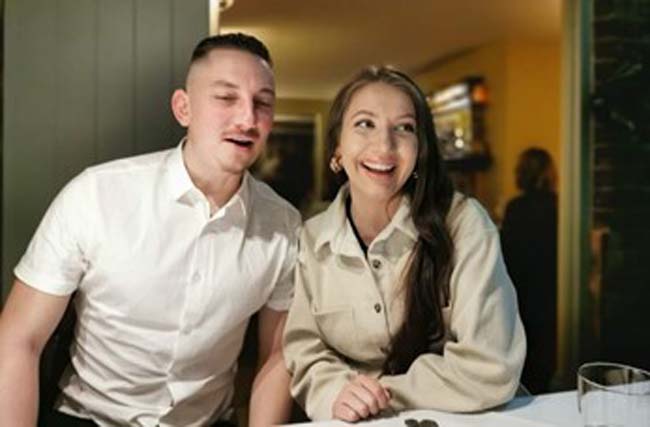 Since the late spring, I’d been suffering from severe headaches and over the course of a few months, they’d been getting worse and worse. I was also experiencing blurred vision. I’d called NHS 111, been to hospital and spoken to my GP a number of times and was being treated for sinusitis but antibiotics weren’t shifting it. I got increasingly concerned about my symptoms, so I kept phoning the surgery insisting on a face-to-face appointment. Eventually, the doctor told me to make an appointment with the optician, which I did.

“At the end of October, Tasha and I went to Specsavers in Biggleswade, where the optician was extremely distressed to discover swelling, which indicated a mass behind my left eye.”

I’ll never forget the look on his face – it sort of ‘dropped’ as he told me to go straight to Bedford A&E, where I was given blood tests, a CT scan and later an MRI scan, the results of which revealed an aggressive tumour in the left side of my brain. We couldn’t believe what we were hearing. Although they couldn’t tell us at that stage what type of tumour it was, they said it looked like something ‘nasty’. Neither of us had previously had any experience of the disease and had no idea what it all meant but it was scary, especially knowing that we had a baby on the way. 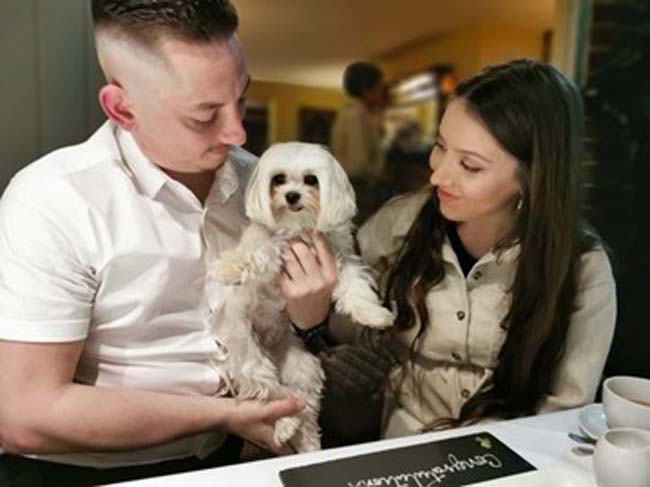 I was referred to Addenbrooke’s Hospital in Cambridge and it was clear that they didn’t want to wait too long to operate. On 1 November, I had a craniotomy to debulk the tumour. The operation lasted about four hours. I don’t remember much of that day but Tasha tells me that I looked remarkably well when she saw me afterwards – I was sitting up in bed and you could barely see where they’d made the incision, even though it stretches across the top of my head from one side to the other. According to my surgeon, Mr Alexis Joannides, things had gone well. He’d managed to remove most of the tumour and the post-op scans confirmed there were only traces of it left. However, the biopsy results revealed the tumour was a grade 4 glioblastoma multiforme (GBM).

“We avoided doing too much online research but we were under no illusion that the diagnosis was extremely serious. Only 25% of GBM patients survive more than one year and just 5% survive more than five years.” 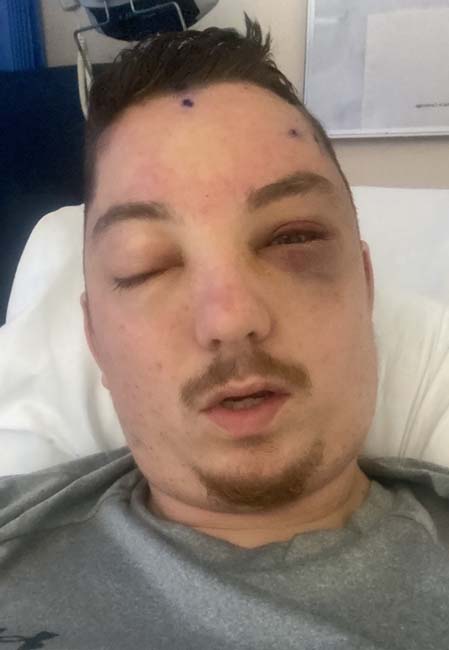 I was discharged after a couple of days and am recovering well. Other than some bruising around my eyes, I am feeling fit and strong and my scar is healing nicely. Tasha is now on maternity leave, so we’re spending lots of time at home together preparing for the imminent arrival of our baby boy, which is really exciting and giving us something positive to focus on. It may only be November but we’ve put the Christmas tree up already, as things are likely to get very busy next month when the little one arrives and I’ll be starting the next stage of my treatment. 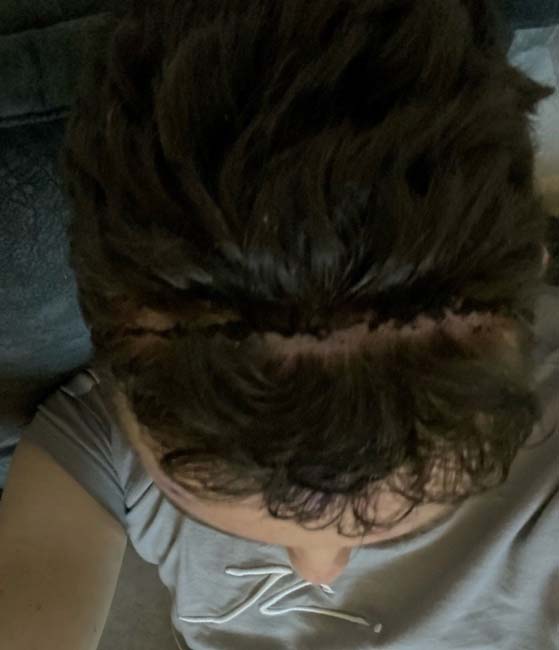 The plan is to undergo a six-week course of daily radiotherapy at Addenbrooke’s Hospital, with concurrent chemotherapy. After the radiotherapy, I’ll have a month’s break before starting a longer course of higher-dose chemotherapy, which is likely to last several months. As I can’t drive for the foreseeable, I’ll be relying on friends and family for lifts to and from Cambridge, so it’s going to be a bit of a slog. I’m expecting the treatment to start around the same time as Tasha’s due date, which isn’t ideal, but we’ll get through it and at least I’ll be spending lots of time at home, as I’m not able to work.

I work as a contractor at GKN aerospace services limited in Luton and Tasha is a freelance beautician. Because we are both self-employed, my diagnosis has put immense pressure on our finances. I’m not entitled to sick pay at work and I’m in the process of applying for benefits. We have a mortgage, bills to pay and soon we’ll have an extra mouth to feed. With this in mind, the community in and around Shefford, where Tasha and I are from, has rallied to support us by fundraising to help support us at this difficult time. A GoFundMe page has been set up and donations have been pouring in from friends, relatives and even complete strangers. We are so touched and are extremely grateful to every single person who has donated or shared the page to help raise awareness. The response has been overwhelming.

Meanwhile, we are not letting my health situation get the better of us. The statistics are shocking but I’m determined to defy the odds and live for as long as possible to see our baby grow up. We firmly believe that maintaining a positive attitude is key to fighting this disease and the excitement and anticipation of becoming parents is certainly helping us to stay hopeful. 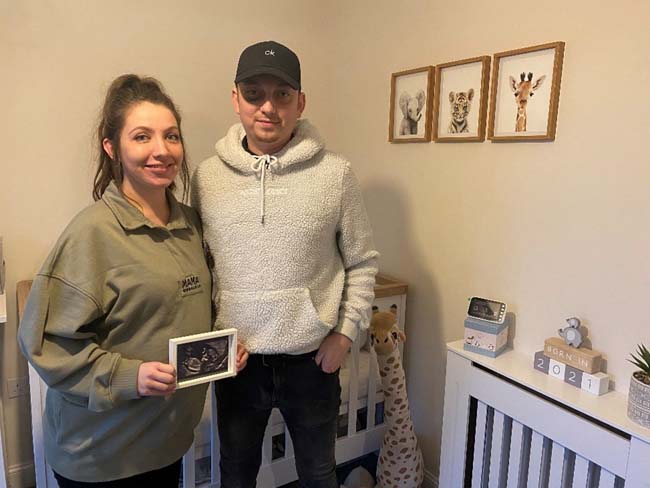 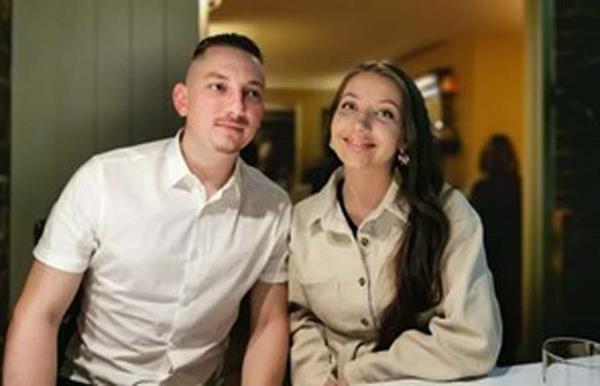