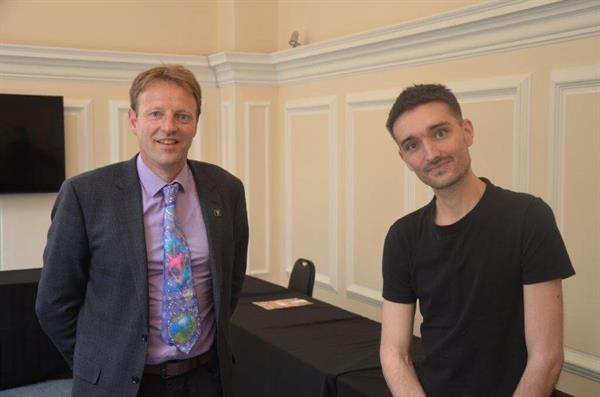 This week there was a meeting of the APPGBT, and the opening business at these meetings is to refer to what happened at the previous meeting. That was on 7th December 2021 and included contributions from several brain tumour campaigners who had differing but very personal reasons for supporting the work of the APPGBT.

One of them was the singer Tom Parker of The Wanted who opened the meeting speaking about his own diagnosis with a glioblastoma multiforme (GBM) in October 2020. He expressed his frustration at the lack of options for brain tumour patients and spoke about the “truly horrific” nature of his gruelling chemotherapy and radiotherapy treatment. He said: “I’m staggered they can find a cure for COVID-19 within a year but can’t find better treatments and ultimately a cure for brain tumours for decades on end.”

This is a seismic event for our community, one that has drawn expressions of grief from thousands of fans and the world of music and entertainment. It is, of course, ultimately a personal tragedy for those closest to him and our thoughts are with them at these darkest of times.

Tom campaigned to make a difference, as we all do, and his visibility bought our cause to new hearts and minds and for the past two days we have been talking to the national media about the need for better funding for research into brain tumours.

The APPGBT meeting this week was well attended and the briefing we produce for Parliamentarians can be read here and the meeting minutes will be uploaded to our website very soon.

This week Holby City ended its 23-year run and one of the show’s most iconic characters (the surgeon Jac Naylor) died following a brain tumour storyline. We didn’t advise on this story, but we did talk to Rosie Marcel who plays Jac Naylor.

We have always been keen to work with fictional brain tumour storylines and, where able, to make sure clinical and personal details are as authentic as a dramatic canvas allows. It is tricky because everyone’s brain tumour ‘storyline’ is different and what might ring true for one person may be completely wrong for another, what is cathartic for one might be distressing to watch for another.

It is important that in our dealings with the media, be they news or dramatic, we remain true to our community in raising awareness with integrity – a responsibility we take very, very seriously.

Gordon Shaw, a 41-year-old comic book artist and brain tumour patient, is the subject of ‘Long Live My Happy Head’. The film, which premiered at the BFI Flare Festival, documents Gordon’s journey with a glioblastoma multiforme (GBM), but it is also about his long-distance relationship with Shawn, an American man he met in June 2017.

Gordon was diagnosed with a low-grade brain tumour at the age of 32, after first being told he had probably suffered a stroke. The tumour progressed to a grade 3 astrocytoma but in December 2021, Gordon was told his tumour was now highly aggressive and he had just months to live.

He used his own experiences to create a series of comic books to help others understand what it is like to be diagnosed with cancer and to be given a terminal prognosis.

Gordon said: “When I heard the tumour had become a GBM my dearest wish was to survive to be able to see the film premiere of Long Live My Happy Head which highlights the most difficult time of my life. It looks like I am going to make it!”

As mentioned in this blog previously we are involved in a number of ways with the 10-Year Cancer Plan: Call for Evidence. We are a part of the group One Cancer Voice, a collection of more than 50 cancer charities which has submitted its views in response to the call from the Government to inform Health Secretary Sajid Javid’s 10-year Cancer Plan. The group has set out 10 tests which it says must be met if the cancer plan is to be successful in delivering world-leading and transformative change.

Among these tests, and crucial to our mission here at Brain Tumour Research, is the need to increase clinical research capacity with health service staff having access to dedicated research time and training. We also want to see many more patients given the opportunity to participate in clinical trials.

We will be submitting our own response ahead of the deadline which is in a week’s time.

We know that a follow-up of a large-scale prospective study on the association between mobile phone use and brain tumours will be of interest to our community and it has this week published its data.

During 1996-2001, 1.3 million women in the UK born 1935-1950 were recruited into the study. Questions on mobile phone use were first asked in 2001 and again in 2011. Access to the health records on the National Health Services databases of all those involved in the study was provided to inform on deaths and cancer registrations.

776 ,156 of the original women were studied for a further 14 years. From this study, published in Journal of the National Cancer Institute, the researchers from Oxford Population Health and International Agency for Research on Cancer have reported that there is no increased risk of brain tumours overall or by brain tumour subtype or its locations in mobile phone users, compared to those who have never used one.

These results mirror those from the only other published prospective study in the BMJ in 2011 and supports the accumulating evidence that mobile phone use under usual conditions does not increase brain tumour risk.

It is two years since I started writing this weekly public affairs blog.

The first one was entitled The Third Sector and Covid-19.

Two years on we are coming out of the pandemic, and I am writing this at a conference in Cardiff for Neurosurgeons – sharing with them updates on our campaigning, although most of the UK based surgeons are already aware of our work and supportive.

It does feel as if we are heading back to normality but with a new set of learnings from our reaction to the pandemic. Our reliance on science, the need for adequate funding, the removal of cumbersome infrastructure – these all enabled us to produce a vaccine and begin a new stage, post COVID. Now can we transfer this innovative and adaptive thinking to brain tumours because one storyline that hasn’t changed in the past two years has been premature loss and the heartbreak despair and anguish a brain tumour diagnosis brings.

We must change that narrative together