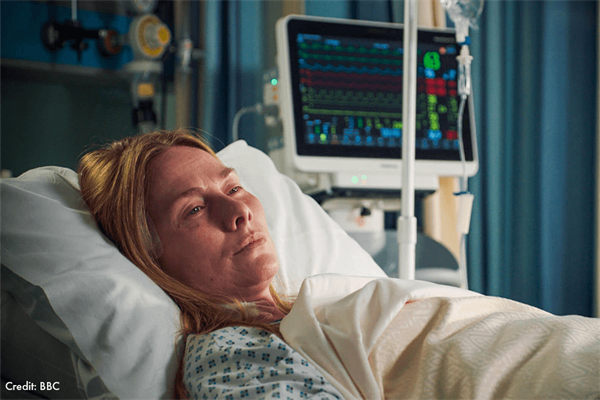 The previously indestructible Naylor, played by Rosie Marcel, first arrived at the fictional hospital back in 2005. In one of life’s unlikely coincidences, the scene which saw her roar into the show clad in black leathers and astride an impressively large motorbike, was filmed by Brain Tumour Research’s Head of Stakeholder Relations Hugh Adams who was then working as a camera operator.

Fans have held their breath over the last few weeks as the character was initially told the tumour was “mercifully” slow-growing only for the plot to take a darker turn as Naylor was told it was inoperable meaning that a clinical trial, which was struggling to find funding, was her only chance.

Speaking to Hugh in a conversation which was confidential until Holby’s final episode was broadcast last night, actor Rosie said: “Jac started to have concerning symptoms and she was facing treatment with seriously frightening side effects. To be told to start with that the tumour is inoperable is particularly disturbing for a surgeon who is used to helping people through surgery and then, of course, she finds someone who is willing to operate and has to agree to that knowing, if she did wake up, she might never be herself again and that’s so terrifying.”

Rosie said she was “deeply shocked” to learn brain tumours kill more children and adults under the age of 40 than any other cancer yet the disease has received just 1% of the national spend on cancer research.

“As so often is the case with rarer diseases, it is research funded by charities that underpins clinical innovation and, in the case of brain tumours, it’s high time for the Government to step up and do more,” she said.