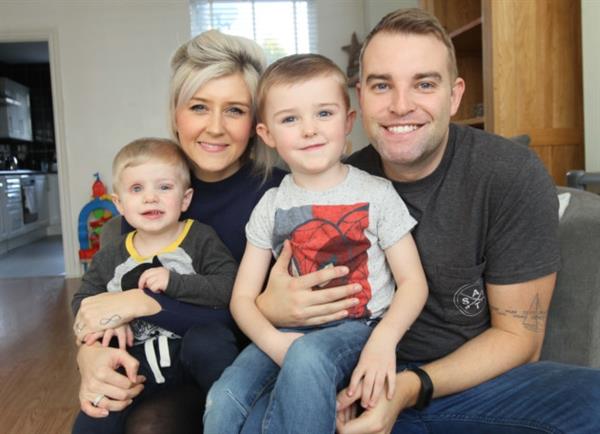 Paediatric nurse Gemma Edgar, 31, was diagnosed with an aggressive brain tumour in 2014, after initially being told it was only a migraine.  Her sons, Dylan and Noah, were just two years and eight weeks old at the time.

Devastated, Gemma was rushed into surgery for a craniotomy to remove her grade four glioblastoma multiforme, followed by six weeks of radiotherapy and regular scans to monitor any regrowth.

The young family were then horrified to find, only a year later, that little Noah also had cancer, after noticing symptoms just before Christmas 2015. Shocked parents, Gemma and Rob Edgar, were told that their toddler son would lose his right eye due to a retinoblastoma, which can be fatal if left untreated. He underwent chemotherapy at Addenbrooke’s Hospital in Cambridge and then they all uprooted over 4,000 miles to Florida for the 20 month old’s intensive proton beam treatment. He has since been fitted with a new eye at Moorfields Eye Hospital in London.

As a former nurse (now retired due to ill health), Gemma had often witnessed parents being confronted with dreaded news about their children but had never been on the other side, receiving such news herself. “As a mum, all you want to do is protect your children but this felt completely out of my control”, she remembers. “They say lightning doesn’t strike twice, but it obviously does,” added husband Rob.

Thankfully, this Mother’s Day, falling within Brain Tumour Awareness Month, is looking infinitely brighter for the gorgeous family. Despite both mother and son, now two, facing regular scans, they are feeling hopeful for the future.

“Noah is so full of beans and fearless, he doesn’t let anything stop him,” smiles Gemma. “The prognosis for him is good,” she says. “He loves his cars and trains, copying anything his big brother does.”

However, Gemma understands that her prognosis is more uncertain. She continues to take anti-seizure medication and suffers occasional short-term memory problems.

Brain tumours kill more children and adults under the age of 40 than any other cancer, according to the charity Brain Tumour Research, yet just 1% of the national spend on cancer research has been allocated to this devastating disease.

“I won’t ever be able to say I’m in remission – even in 10 or 15 years’ time,” she says. “I could just hide myself away under the duvet, but I don’t want my boys to have bad memories of Mummy crying all the time.”

Gemma had another clear scan in September and has been seizure-free for over a year. She’s doing almost everything she used to do, running a couple of times a week and has even got her driving licence back.

Despite running away from “Nurse Mum” administering his eye drops four times a day, Noah is doing well too, particularly loving his new swimming lessons. He wasn’t able to swim during his treatment last year, or even have a bath with his big brother Dylan.  “Little things like that make you realise what normal life is” says Gemma. “Although, with both boys in the bath, it’s like a tidal wave. The bathroom is soaked afterwards!”

The family are off to Florida again in May, for Noah’s check-up, but this time they are looking forward to the boys paddling and playing on the sand.