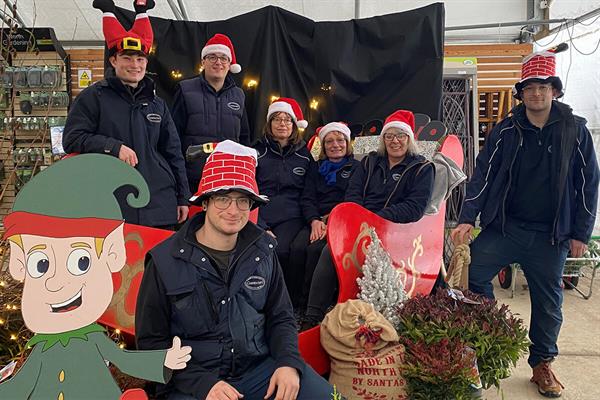 A Hertfordshire garden centre is supporting Brain Tumour Research as its charity of the year.

Carpenter’s Nursery and Farm Shop, in St Albans, is supporting the charity following the close connection two of its staff have to brain tumours and to St Albans resident Shay Emerton.

Shay, whose family owns Burston Garden Centre, where Carpenters’ plant area manager Darran Major used to work, was diagnosed with a grade 2 glioma in April last year. He underwent surgery in which 98% of his tumour was removed, but he suffered supplementary motor area (SMA) syndrome which left him with temporary paralysis down his right-hand side.

Manager James Petrie said: “The idea was to have a bit of fun whilst bringing some festive cheer to our customers and raising money for what is a very good cause. Our staff got involved by wearing ridiculous hats, including one which featured Santa’s legs coming out of a chimney.”

As part of the festivities, visitors could have photos taken with a large Santa sleigh being pulled by life-sized reindeer, which was made by Darran and the team. There was also a festive raffle with a bumper Christmas hamper, including produce from Carpenter’s farm shop, up for grabs.

Further fundraising events are being planned for each month throughout 2023, which will also coincide with Carpenter’s 100th year anniversary celebrations.

Darran said: “I’m really pleased to be supporting Brain Tumour Research as our charity of the year and look forward to holding a host of fun events in 2023.”